Brianne Arviso could have easily stepped into an entry-level job in the construction industry after graduating from high school.

At that time, the Arviso Construction Company, started by her grandfather, Olsen Arviso Sr., had been in business for more than two decades. Her father, uncles and aunts worked for the company, headquartered near Gallup, New Mexico, on the Navajo Nation. 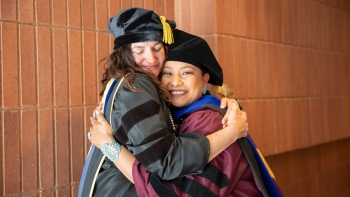 “I grew up with the company being a big part of my world,” she says.

Still, Arviso remembers feeling the pull of a higher calling. To start with, she wanted to go to college.

“But I didn’t want to go to any schools nearby because I didn’t want to be so close that I would lose focus and motivation and just come back home every night,” Arviso says. “I kind of wanted to get out into the world on my own. I wanted to challenge myself.

She knew Arizona State University was welcoming to Native Americans. For one, it offered in-state tuition to people from the Navajo Nation, even for those from reservation communities not in Arizona.

She also knew the percentage of Native American students graduating from ASU was higher than at many other universities.

Arviso signed up as a business management major, with the idea of seeking a career in leadership positions. But after a year in the program, an academic adviser talked to her about something she had somehow remained unaware of — specifically, the Del E. Webb School of Construction within the School of Sustainable Engineering and the Built Environment, one of the seven Ira A. Fulton Schools of Engineering at ASU.

A few years later, Arviso had both a bachelor’s degree in construction management and on-the-job experience working part time for a few Phoenix-area building contractors.

After graduation, she got a full-time position with a leading construction company in the Southwest, Kitchell Corporation. Around that time, however, Arviso’s grandmother, Ernestine, passed away.

“My job was good,” she says, “but my grandmother was the center of everything in our family, so that made me feel kind of lost and I wasn’t sure what I wanted to do.”

During that period of reflection, Arviso would remember that she had always felt happy being in school and on campus. 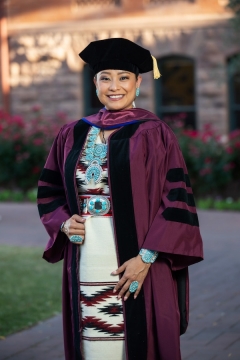 Along with her commencement regalia for the spring 2022 ceremony celebrating recent graduates of Ira A. Fulton Schools of Engineering doctoral programs, Brianne Arviso wore a Navajo rug dress, called a biil, and traditional turquoise jewelry. The dress was made for Arviso and gifted to her by her friend Craig Spencer and his family. Photo courtesy of Brianne Arviso

“It became a turning point in my life that led me to pursue a master’s degree,” she says.

She returned to ASU to earn a master’s degree and in that program found a supportive environment that helped “fill the void from the loss of my grandmother,” she says.

It was then that she also moved beyond studies and into research, focusing on exploring construction in tribal communities — and finding “there was almost nothing,” she says, in the way of extensive studies of the social issues surrounding construction practices on tribal lands.

Arviso recalls how around that time a former teacher, William Badger, today a Fulton Schools professor emeritus, encouraged her to pursue a doctoral degree.

“He told me, ‘You could be the first Navajo woman with a PhD to teach in the Del E. Webb School of Construction,’” Arviso says.

Arviso graduated this past spring as one of the Fulton Schools’ honored doctoral degree recipients — and more significantly, as one of the very few Native American people to attain such a high level of academic achievement in the construction field.

The School of Sustainable Engineering and the Built Environment has maintained an enrollment of about 30 to 35 Native American students in its degree programs — just under 2.5% of the school’s population over the past five years. That includes about 12 to 14 students consistently enrolled in the construction program.

Those who have served as mentors and advisers during Arviso’s impressive higher education journey say her achievement is about much more than developing technical and management skills.

“Her accomplishment is inspiring,” says Associate Professor Kristen Parrish, chair of the Fulton Schools construction graduate studies program and Arviso’s doctoral studies adviser. “She is driven and ambitious, and one of the best learners and hardest workers I’ve seen.”

Arviso has demonstrated those qualities in her doctoral work, which has included extensive research on tribal socioeconomic and cultural challenges faced by the construction industry on Native American lands.

By the time she completed her doctoral studies, Arviso “was already on the front lines as a trailblazer” in efforts to bring advances in construction practices to those underserved populations, Parrish says.

Arviso was also proactive in efforts to aid other students, says Professor Emeritus Allan Chasey, a former Del E. Webb School of Construction program chair. He interacted with Arviso in ASU’s Construction in Indian Country, or CIIC, organization, and notes her contributions to recruiting other Native American students.

“She was hard-working and organized, and always available to take on projects and to ensure the end result was a success,” Chasey says. “She was a model student and demonstrated talents and abilities that I think will help ensure her success.”

Marcus Denetdale, the current CIIC program manager, views Arviso as the kind of astute and resilient crusader needed to advocate for Native Americans’ involvement in contributing to the evolution of today’s construction industry.

“Over the past five years, she has been really good about keeping me current on things that are happening in the industry,” Denetdale says. “Brianne has also been promoting disruption in this male-dominated business culture for years. If anyone asks me if there’s someone who can speak about the importance of women in construction, she’s one of the first people I call.”

With Arviso’s achievements to date, Denetdale adds, “She has the potential to be a role model who might inspire other women who are hesitant to get into the field.”

That view of Arviso is shared by architect Wanda Dalla Costa, a faculty member in both the Del E. Webb School of Construction and The Design School at ASU. 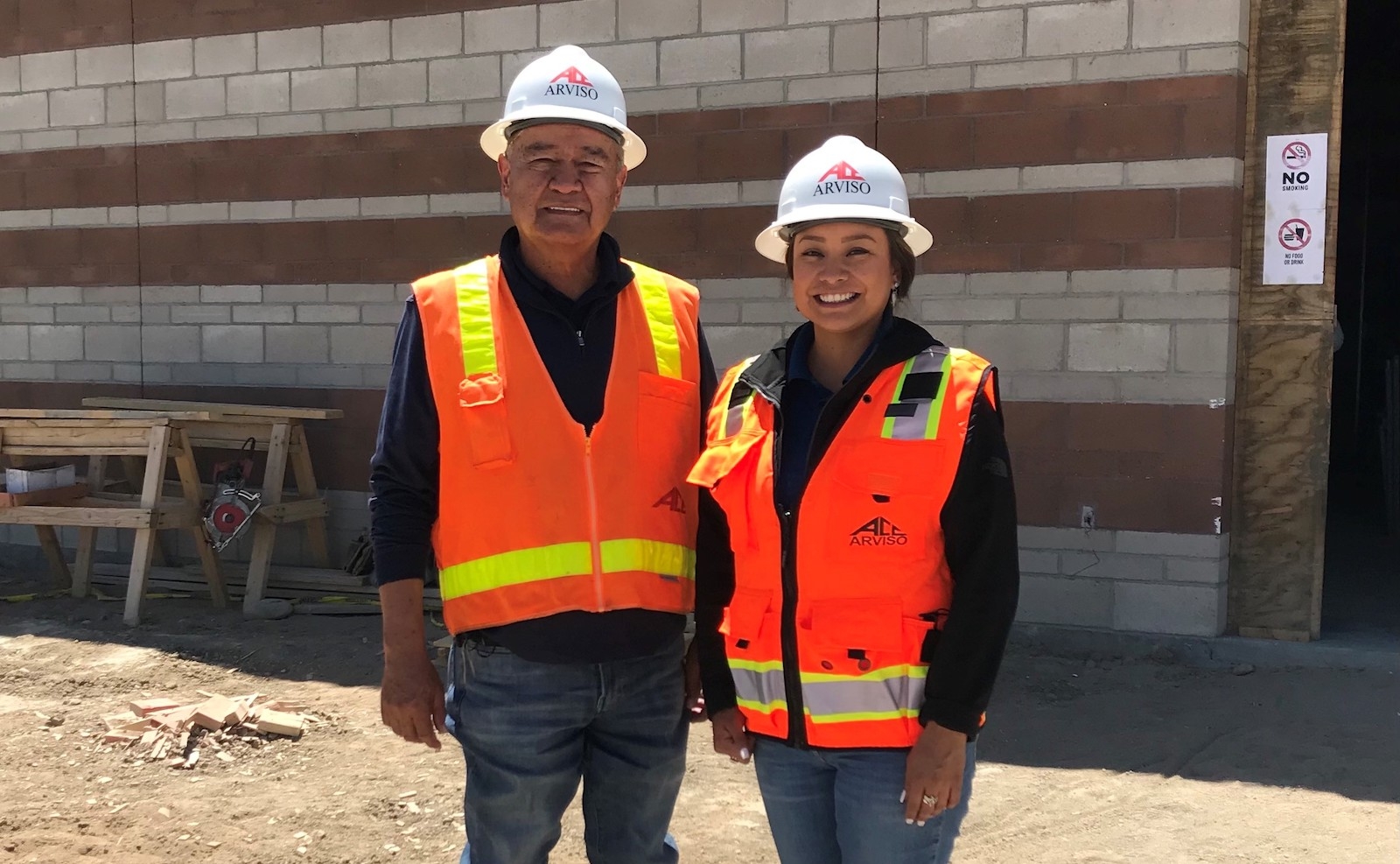 Brianne Arviso poses with her father, Olsen Arviso Jr., at the site of one of the Arviso Construction Company’s recent projects, the Math and Science Building at Diné College in Shiprock, New Mexico. Photo courtesy of Brianne Arviso

A member of the Saddle Lake First Nation, Dalla Costa has for two decades worked with North American Indigenous communities. She founded the Indigenous Design Collaborative and teaches in a service learning studio, both of which enable students to engage with local tribal communities.

“This profession needs more people who come from different circles, who think in different ways, who push back on accepted norms in construction and related industries, and who can potentially open new pathways that move communities forward,” Dalla Costa says.

Because of Arviso’s advanced formal education in the field, along with management and on-the-ground experience gained in work for successful construction companies including her family’s company, Dalla Costa sees Arviso as “a young woman of color who is now in a position to be a very important role model to the next generation.”

Arviso says she has been especially proud of drawing on her own cultural heritage and knowledge in her studies and research at ASU, particularly in her doctoral dissertation.

“Navajos have been developing and applying their own construction planning and design for a very long time. It has just never been documented,” she says.

Her doctoral dissertation focused on pre-project construction planning for tribal communities, but also included a chapter specifically on drawing the connection between the roots of the fundamental philosophy of life of the Diné, the Navajo people, and their approaches to building and improving their communities.

Now, in her work for Arviso Construction’s commercial ventures, she can contribute to planning, budgeting, cost projection, labor management, design and related architectural styling, as well as scheduling and overseeing day-to-day building operations.

Equally as important, she says, is understanding the basic idea of why each project is being built and what the owners want the structures to provide for their businesses and for their communities.

“So, it’s all about really understanding every aspect of construction and all the details,” Arviso says, “but also understanding the people you are building for and their goals and their environment and their outlooks on things.”

While her construction career has been evolving, Arviso also started a flower shop in Gallup, New Mexico, close to the Navajo reservation border. She’s taking on the myriad tasks of operating the small retail business, which has meant learning about providing customer service, managing employees, expenses, inventory, bills and taxes.

Arviso’s entrepreneurial spirit “is one reason I find her so amazing,” says Parrish, her adviser.

“She is the seventh PhD student I’ve advised, and I’m proud of all of them. But she’s the one I’m probably most proud of because her journey was more challenging than for most people,” Parrish says. “She has a real desire to give back to her community. So to see her being successful is really exciting.”

Arviso says she has fulfilled her biggest educational aspiration by being the first Navajo woman to earn bachelor’s, master’s and doctoral degrees from the Del E. Webb School of Construction.

The only way to exceed that achievement, she says, “is to someday have my own Brianne Arviso School of Construction.”