The Arizona State University School of Music, Dance and Theatre has announced Katie Peavey as clinical assistant professor of stage and production management.

Peavey is a freelance Equity stage manager who moved to Phoenix from Philadelphia right before the pandemic. She has been a faculty associate mentoring ASU students for the past year, as well as teaching the Introduction to Stage Management course. 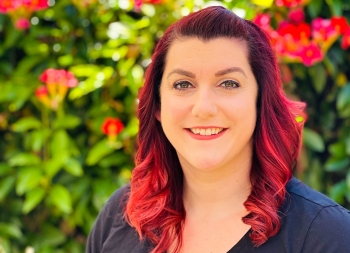 “We are excited to have Katie Peavey join our community,” said Heather Landes, director of the ASU School of Music, Dance and Theatre. “Katie’s expertise, her creative activity and professional experience, and her commitment to safe set practices will enhance the specialized design and production course offerings she creates for our students.”

Peavey is a Drexel University graduate with a bachelor’s degree in entertainment and arts management. She is a member of the Stage Managers’ Association and has been a member of Actors’ Equity Association since 2015, where she also participates as a member of the stage management committee. She first discovered theater production and stage management in high school. She said she found her leadership and problem-solving skills were valuable assets in the field, and the creativity kept her hooked.

“A lot of people don't necessarily think of it as a creative field because it's a lot of reports, management, timekeeping, that kind of stuff,” Peavey said, “But the problem solving is where the artistry comes out — figuring out how to fit a ridiculous amount of furniture backstage or calling a really complicated sequence or when everything goes wrong and you're in the middle of a performance.”

“I personally believe that if you're not continuing to learn through the rest of your career, you're doing it wrong,” she said. “How do you learn how to problem solve unless you have problems? I've always liked the learning side of it. I enjoy asking questions: How are you thinking about it? Let’s look at this and figure it out together.”

Peavey’s work has taken her to Arizona, California, New York and Philadelphia. Some of her favorite past credits include the international tour of “50 Shades! The Musical Parody” as well as “The Rocky Horror Picture Show,” “Daddy Long Legs” and “Sondheim on Sondheim” with The Phoenix Theatre Company. She said that finding mentors is extremely important for stage managers.

“I would recommend talking to anyone who you can,” Peavey said. “A lot of stage managers are willing to sit down and have coffee or even let you shadow them during a show. If you reach out to them, they are going to be willing to talk to you about their experience or offer advice. Speak to anyone you can to learn as much as they're willing to share.”

In recent years, ASU theater has been focusing on safety and consent during rehearsals and productions, and Peavey said she is excited to be part of those forward-thinking changes.

“The question for me is: How do I use what I've experienced in professional theater to help the next generation learn how to deal with it? I want to help them know what is acceptable, what is not acceptable and how to set boundaries for themselves,” Peavey said. “I think that's a really exciting thing to be doing.”

“I truly believe in working with a smile on your face. If you're not having fun, you're doing it wrong,” she said. “We're playing make believe and telling stories. So as storytellers, we should be enjoying what we're doing. Now, some of our stories are going to be hard, they're going to be heavy and overwhelming, but there should be something that we get out of it.

“This industry is too hard. It takes too much of you if you're not in love with it.”

Students swiftly putting the finishing touches on their fluid power vehicles; professors and mentors anxiously watching as teams make their way to the starting line; and judges and industry members looking forward to seeing student creativity and collaboration at its finest.The scene was lively at the 2021-2022 Fluid Power Vehicle Challenge this past April in Littleton, Colorado.Arizona State Univ...

Students swiftly putting the finishing touches on their fluid power vehicles; professors and mentors anxiously watching as teams make their way to the starting line; and judges and industry members looking forward to seeing student creativity and collaboration at its finest.

The scene was lively at the 2021-2022 Fluid Power Vehicle Challenge this past April in Littleton, Colorado. 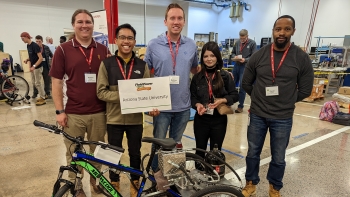 Arizona State University’s team, based at the Polytechnic campus, was one of 11 collegiate teams that prepared all semester for this moment, and it paid off. The Sun Devils placed third overall for the design of their human-powered tricycle and were also recognized for exemplary performance in the endurance category.

The competition, organized by the National Fluid Power Association, challenged participants with designing a human-powered vehicle that integrated fluid power, or hydraulics and pneumatics — two technology platforms that are not normally associated with each other — offering an opportunity for advancement through innovation.

Wenlong Zhang, an associate professor of engineering at The Polytechnic School, one of the seven Ira A. Fulton Schools of Engineering at ASU, serves as the team’s faculty mentor.

“Placing so highly at this competition seemed like a natural consequence of the team devoting themselves entirely to this process,” Zhang says. “They impressed other universities and industry members with their professionalism, broad skill sets and team mentality. I am very proud of this group.”

Fourth-year engineering students in The Polytechnic School have the opportunity to select the capstone project that they will work on during their final semester in the program. Many of the projects are industry sponsored, but the Fluid Power Vehicle Challenge is unique in that it’s a competition project.

Team captain and recent mechanical engineering system program graduate Matthew Seddon says this project was his first choice because he “loves building, and this was the most hands-on project.”

“From 3D printing and lathe machining, to using the drill press, welding, torquing, screwing all of the nuts and bolts together and then competing, this project was appealing to the whole group,” Seddon says.

Seven other students, who span three of the engineering program concentrations at The Polytechnic School, also joined the team — each bringing a different skill to the tricycle build. 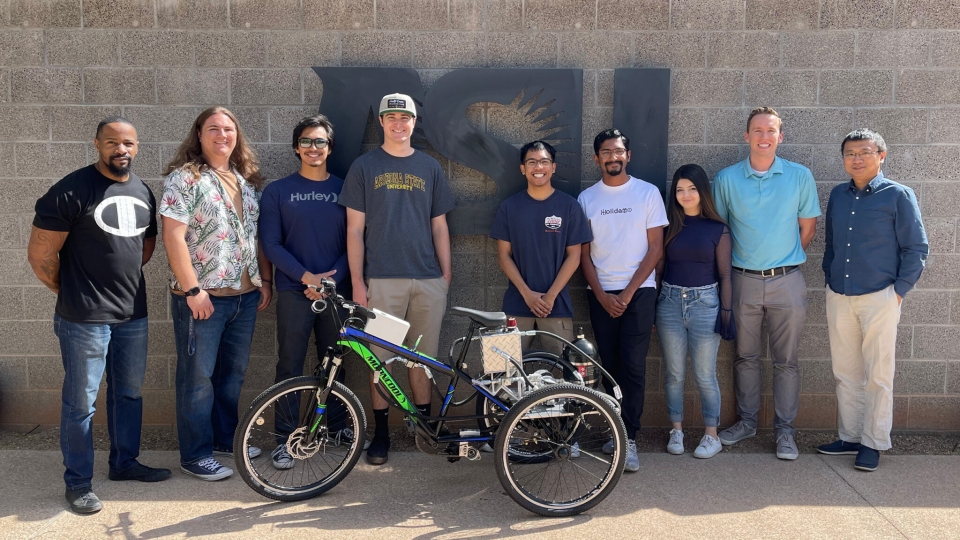 Seddon orchestrated the progress of the build, advocating for everyone’s individual talents and closely monitoring deliverables.

“Matt was a very dedicated leader. He would wait for me outside of my class and quickly take the opportunity to talk to me between classes,” Zhang says.

In addition to Seddon’s leadership, automotive systems student Andrew Peavler was the machinist lead, working with computer-aided design, SolidWorks software and the computer numerical control machine — guiding other team members along the way.

Logan West, a mechanical engineering systems student, partnered with Peavler to work on computer-aided design and assembly while keeping the team motivated. Electrical systems engineering students Jerred Hermogino and Akhil Johnson were responsible for configuring the electrical system on the vehicle, which included the development of an electrical circuit capable of recording and displaying the vehicle’s speed on an LCD screen.

“Hala made the simulation at the very beginning to show us our speed, the distance we could go and how much torque we would have, so she could set realistic goals for us to reach,” Seddon says.

Jacob Delacruz, also an automotive systems major, “came through in a big way,” Seddon says, when he welded some tough aluminum during the final phases of the build. He also installed the chain guards and helped with the mounting of the reservoir.

While not officially on the team, Jonathan Bush, a systems engineering doctoral student in Zhang’s lab — the Robotics and Intelligent Systems Laboratory, or RISE Lab — and staff member Rhett Sweeney, a lead machinist and instrument designer at The Polytechnic School, helped set a strong foundation for the team. Bush provided valuable technical suggestions, and Sweeney helped the team navigate the software and machinery at the manufacturing facilities on the Polytechnic campus.

Various other faculty, staff and students supported this team on their journey to success. Tim Beatty, business development director for the Fulton Schools, Darryl Morrell, associate professor of engineering, and Stevan Hunter, engineering faculty associate, saw immense value in exposing students to the competition experience and helped bring this project to life.

When Zhang arrived at the competition, he said he immediately noticed that students of opposing teams were already making friends with one another.

“That’s the part I liked the most,” Zhang says. “In my mind, we were all winners.”

He says he believes the team represented ASU’s innovative mindset throughout the build and at the competition by making the vehicle lighter, travel longer and run at higher speeds, all while maintaining safety.

“The Polytechnic School students are a perfect fit for this challenge,” Zhang says. “We focus heavily on user-inspired and hands-on training; and to do well in a competition setting, students have to be able to design manufacturing concepts, do mathematical computation, run a simulation, conduct testing and, finally, have a functional product at the end, and our team did just this.”

Among all of the hard work and dedication in various areas of engineering, the team’s ability to do quick and effective onsite debugging led them to success.

“Throughout the process, it was apparent that the team was applying skills and knowledge that they learned during their time at ASU,” Morrell says. “It’s projects like these that are preparing students for careers in engineering.”

The team’s winnings included $1,000 from their third-place win, which was split among the team members, and $1,000 for their endurance recognition, which will partially fund next semester’s team.

Powering into the future

Seddon will launch his career as a mechanical engineer at aerospace and defense technology company Northrop Grumman, in Chandler, Arizona, and says his experience at ASU prepared him for this role.

“I don’t think there’s anything cooler than being able to call myself a rocket scientist,” Seddon says.

Zhang looks forward to turning the Fluid Power Vehicle Challenge team into a student organization at ASU’s Polytechnic campus. He hopes this will bring in new perspectives and encourage the team to grow and improve.

“Our goal as faculty is to provide a real-world problem for students to get inspired by, and this is the perfect example of that,” Zhang says.