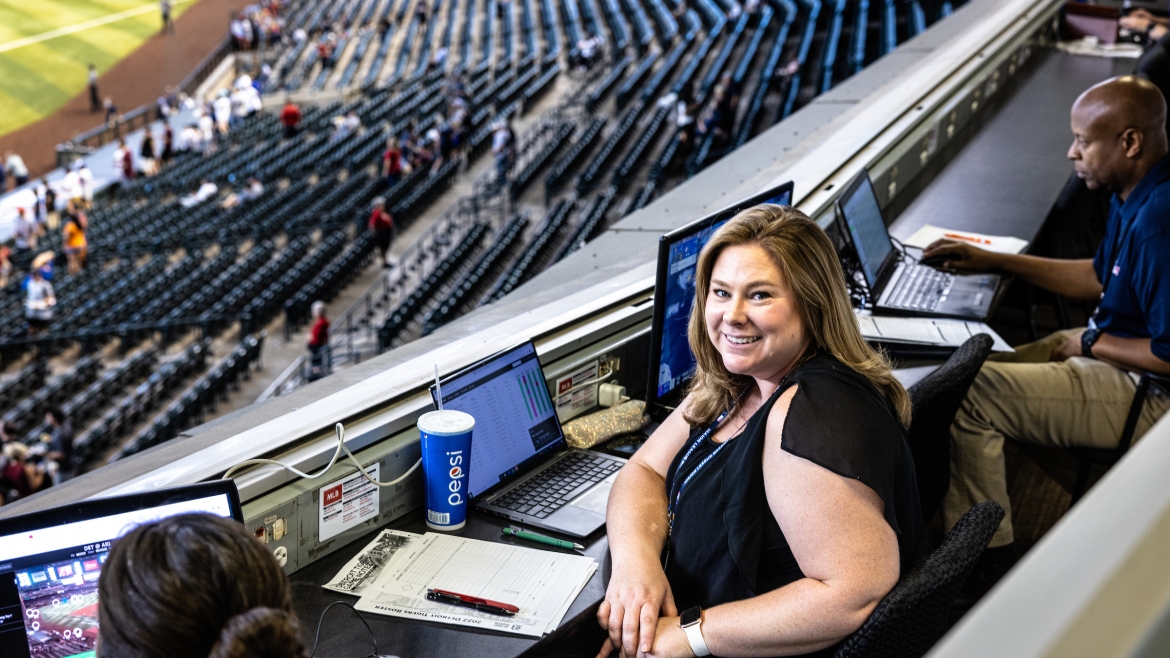 When Kara Blackstone hears the crack of the ball on a baseball bat, it’s not a moment of fan excitement for her — it’s a judgment call.

Blackstone, an alumna of Arizona State University, is an official scorer for Major League Baseball and the first female official scorer assigned to the Arizona Diamondbacks.

The job requires deep knowledge and love of the game.

“I make the tough calls,” said Blackstone, who graduated in 2018 with a degree in parks and recreation management from the School of Community Resources and Development at ASU.

“Whatever I call is what affects their stats, which every baseball player lives off of. It’s what helps them grow.”

Every MLB game has an official scorer, who sits in the press box and not only records the results of individual baseball plays but also judges some of them. The umpires decide strikes and balls, but when a batter reaches first base, the official scorer decides whether it was a hit or an error. Those judgments affect the batting average of the hitter and the personal statistics of the pitcher, including no-hitter games.

Blackstone was part of an initiative by MLB to diversify the ranks of the official scorers, many of whom stay in the job for decades. Tyler Barton, the senior manager of data operations for MLB, created a “scorer university” program to train a new cohort last year, including Blackstone, who was among five women hired for this season. Before this, MLB recorded only four other women official scorers dating back to the 1800s.

Blackstone not only had a passion and background in baseball, she had the confidence to turn some good luck into a path to a dream job.

She answered some questions from ASU News about her historic new role:

Question: How did you become an official scorer?

Answer: I was in the right place at the right time.

I went to South Mountain Community College and played softball there. I graduated and became the sports information director, working on the website and following the baseball team. I was doing stats for them on an app called “Game Changer” and keeping score for them.

While I was going to ASU, I was working at Buffalo Wild Wings in Scottsdale. During spring training, a group came in and I had a feeling that they were baseball people. We started talking. When I found out what they were doing, I told them that I was doing something similar for the community college.

Things happened. Conversations were had.

I gave my business card to the man who is now my boss (Tyler Barton), and he had me come to a spring training game a week later.

Then I was hired for a Statcast stringer position, inputting what happens on the field into the computer so you can watch it on your app, livestreaming.

Q: How did you make the leap to becoming an official scorer?

A: Tyler supervises the official scorers, and he is trying to make it an even playing field. So if a call is an error in one place, it will be the same in a different location.

And he came up with the idea for an official “scorer university,” to also usher in diversity within MLB. The idea was to bring in more diverse people for the job and also to see how much we actually knew and to teach us.

Q: What did you learn at “scorer university”?

A: I grew up watching baseball, but there are so many things in official scoring that I never knew because I didn’t have to pay any attention to it.

We talked to a lot of official scorers, and they would talk about certain plays they had.

We watched video clips. The biggest thing they were trying to ingrain in us was “ordinary effort,” and that’s how to you decide whether it was a hit or an error. We watched clip after clip on why it’s an “ordinary effort” or “extraordinary effort.” We did little quizzes on whether we thought it would be an error or not. 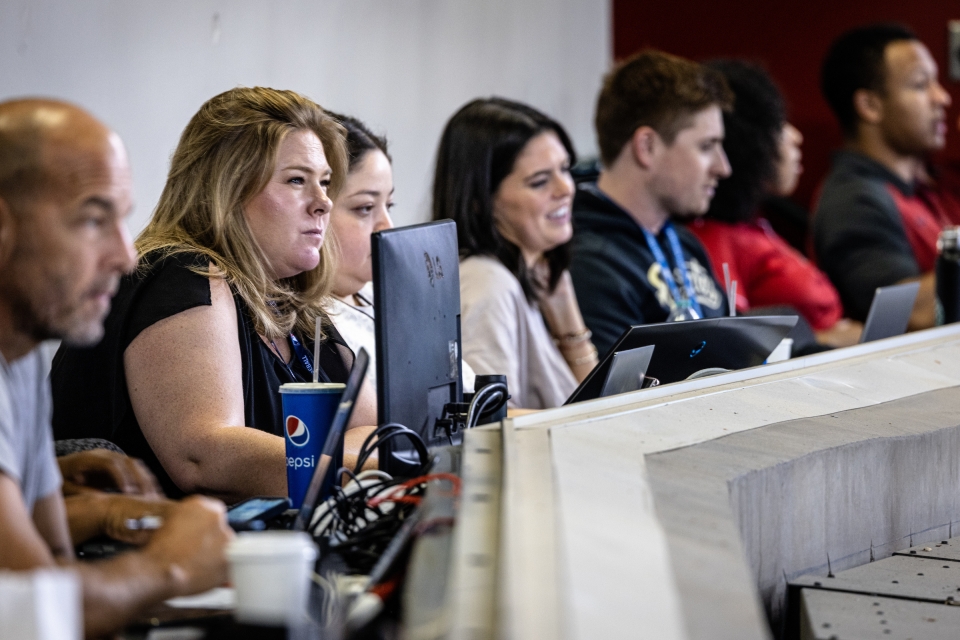 ASU alum Kara Blackstone (second from left) works as an MLB official scorer in the press box at Chase Field in Phoenix at the Arizona Diamondbacks game on June 24. Photo by Charlie Leight/ASU News

Q: Did you have to pass a quiz to get the job of official scorer?

A: No. There is a quiz we had to take to get into Major League Baseball, but the job was based on references from the other scorers in that market. For the Arizona Diamondbacks, there are three other scorers, and I had worked with them for a year doing Statcasting. They knew my baseball knowledge.

From Day One, Tyler has said, “You’re going places,” and his support has been phenomenal. I’m extremely grateful for the opportunity.

A: I’m a full-time MLB employee. When I’m not scoring at the ballpark, I’m at home, where I manage the Statcast stringers. I’m watching two or three games at a time, making sure things are going well for the stringers at the ballpark.

I manage the stringers for all 30 clubs.

Each official scorer works about 20 games, but because this is my first year and I have the full-time MLB job, I’ll do about 13 this season. I’ll do more next season.

Q: What’s your favorite part of the job?

A: Going to the ballpark. The atmosphere is so fun. When I’m the official scorer, I get to just walk in and sit down and take it all in.

Q: Were you a baseball fan growing up?

A: I grew up in Albuquerque, so I went to a lot of Triple-A (Albuquerque Isotopes) games. I worked for the team as an usher and as a supervisor for the “fun zone” out in the outfield. That’s where I got my start with baseball.

I had no idea it would turn into this.

I didn’t go to a whole lot of MLB games until I moved here and started going to more games.

Since I played softball, I got the gist of how to score, but I really didn’t dive deep into it until when I was at South Mountain as the sports information director.

The head baseball coach at South Mountain jokes with me. He’ll say, “You didn’t know what a wild pitch was, and now you’re making the actual calls.” I tell him, “You taught me, and it worked.”

Q: What did you study at ASU in the Watts College of Public Service and Community Solutions?

A: My degree is in parks and recreation management. I had an idea that I wanted to do sports management, and that was, at the time, as close to baseball as I could get.

To be honest, I was all over the map. I wasn’t sure what life would bring.

I took a lot of event-planning classes and started getting into events. When I graduated, I went to Desert Mountain Country Club and became the event coordinator.

I thought, “Baseball is not going to be my career. I have to do something else.”

I got into the mindset that I would keep baseball as a hobby.

Q: Now that you work in baseball, is it still fun?

A: Yes. Every single game, I learn something new and I see something different. The first two games I scored this season were insane. The first game (on opening day) ended in a walk-off, and the second game went into extra innings and had some screwy plays.

It’s never a dull moment for me.

Q: What would your advice be to a young person who would like to do what you do?

A: Go score as much baseball as you can. Go to Little League or high school games, ASU baseball games. Get the experience, learn as much as you can and don’t be afraid to talk to people.

Top image: ASU alumna Kara Blackstone poses for a photo at Chase Field before she worked as the official scorer for the Arizona Diamondbacks game on June 24. Photo by Charlie Leight/ASU News

First Hall of Fame and Hall of Distinction classes since 2019 set to be inducted at October 8 ASU vs. Washington football game ... First Hall of Fame and Hall of Distinction classes since 2019 set to be inducted at October 8 ASU vs. Washington football game