No. 8 Softball Falls Short in 11-Inning Thriller for Game 1 of Super Regionals No. 8 seed softball falls in extra innings to No. 9 Northwestern in game one of Super Regionals.

Arizona State University has a long-standing reputation in natural and artificial photosynthesis research, thanks in part to Ana and Tom Moore, who have been important members of the School of Molecular Sciences (formerly known as the Department of Chemistry and Biochemistry) since late 1976. The pair were also founding members of one of the earliest centers at ASU, the Center for the Study of Ear...

Arizona State University has a long-standing reputation in natural and artificial photosynthesis research, thanks in part to Ana and Tom Moore, who have been important members of the School of Molecular Sciences (formerly known as the Department of Chemistry and Biochemistry) since late 1976. The pair were also founding members of one of the earliest centers at ASU, the Center for the Study of Early Events in Photosynthesis. This year marks 45 years of service to ASU for both.

Prior to beginning their careers, the young couple met in a physical chemistry course at Texas Tech University. 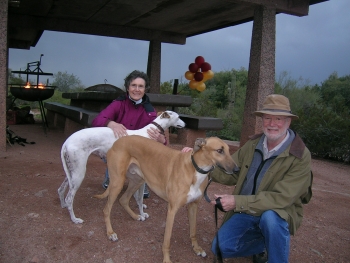 Ana and Tom Moore with their dogs. Download Full Image

“That was the only good thing about pchem, in my opinion,” Tom said.

Both Moores had postdoctoral positions at the University of Washington, then moved to Tempe to begin their careers at ASU, where they soon met another young chemistry professor, Devens Gust.

Gust remembered, “Ana, Tom and I all began our careers at ASU at around the same time, and we three usually brought our lunches and ate together. During these breaks, we realized that although we had different and complementary areas of expertise, we had similar interests in the big questions. We decided to work together on an artificial photosynthesis project. Our first graduate student was Gary Dirks, who went on to become president of BP-AMOCO Asia and now holds a senior position at ASU. This was the start of a more-than-40-year collaboration that has led to a lot of great science and trained numerous excellent students. We have not just been around for a long time, but also accomplished many good things, which is very satisfying, and I have enjoyed every minute of it (almost).”

The Moores credit their productivity to collaborations, hard work and trying to ask good questions.

“Our careers would be quite different if we had not collaborated as much as we have,” Tom said. “You have to get rid of the idea that you’re the most important person and be willing to share your ideas and listen to others.”

“People who work on their own don’t often produce as much,” Ana added. “Find a field that is hot, work hard and interact with the scientific community.”

They also recognize the influence of leadership in their success.

“Ana and I were both influenced by the value prioritization that the leadership in our department had,” Tom said. “Mort Munk always knew the way the department should go and which way priorities and values should be established.” 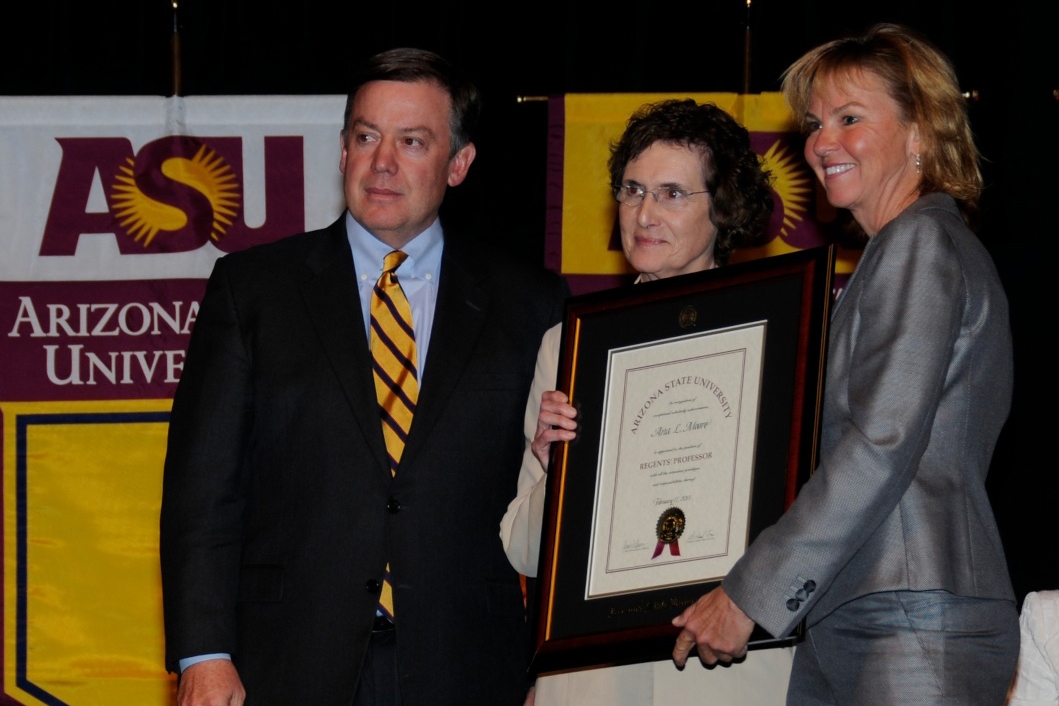 Ana Moore (center) at a ceremony where she was named a Regents Professor in 2011. 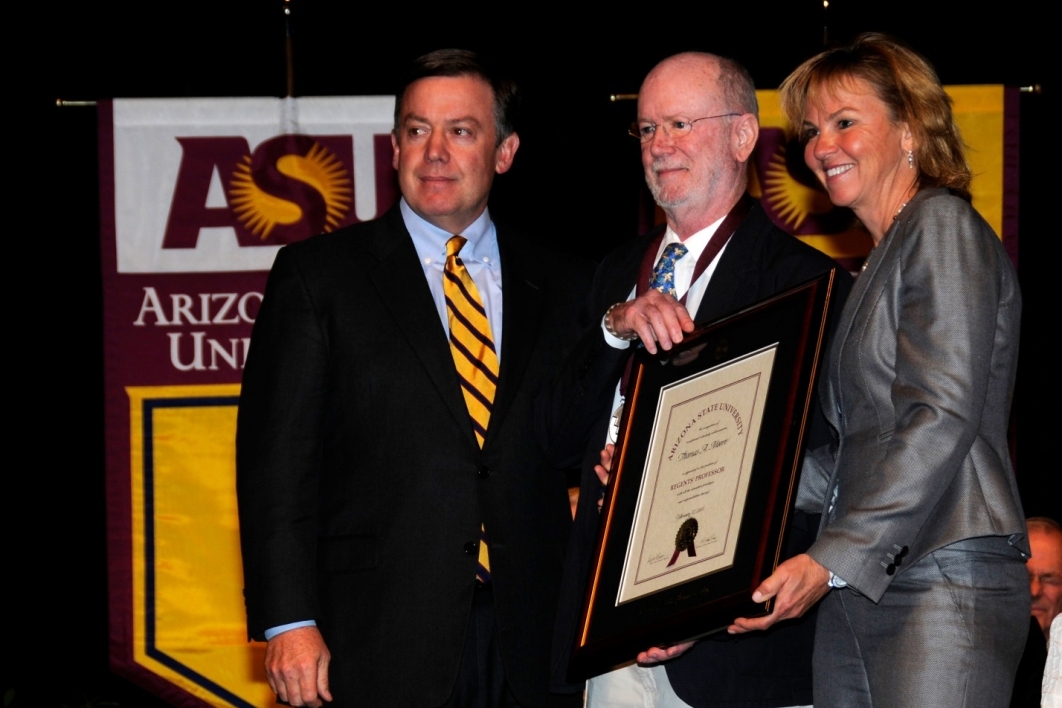 That same year, Tom Moore (center) was also named a Regents Professor. “There may be other married couples that hold this distinction (both Regents Professors), but I don’t know of any. This also makes them unique at ASU as an academic super couple,” said Gary Krahenbuhl, emeritus professor and former dean of The College of Liberal Arts and Sciences. 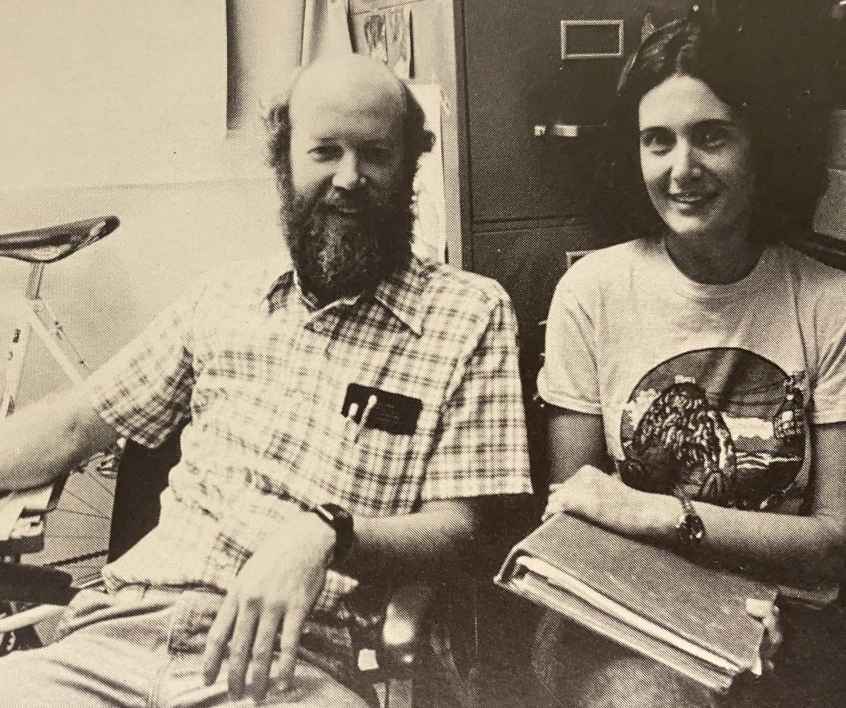 Tom and Ana Moore early in their ASU careers. Gary Krahenbuhl, emeritus professor and former dean of The College of Liberal Arts and Sciences, describes the Moores’ contributions as well as challenges they overcame.

“They were faculty members who loved their work and pursued it in a quiet, persistent and inspired manner,” Krahenbuhl said. “They weren’t ones to 'toot their own horn,' but the importance and impact of their research spoke volumes about its significance. Their work on bio-inspired molecular systems, most notably photosynthesis, holds incredible promise for the green energy revolution. They have focused on the capture and storage of light energy with artificially created molecular systems that mimic those found in nature but (that) can be designed for dedicated purposes.

“Beyond their research, they were unique in at least two ways. In their early years, there were almost no married faculty couples where each had a tenured faculty position at ASU. Having both members of a married couple in the same department was virtually unheard of. It is a credit to them and to the department that they made this work, as such arrangements often face significant faculty resistance. Over time, they were both named as Regents Professors. There may be other married couples that hold this distinction, but I don’t know of any. This also makes them unique at ASU as an academic super couple.”

The Moores’ love for what they do and their love for each other has clearly contributed to their productivity. They continue to be active in photosynthetic research, but now are also collaborating to investigate proton transfer between molecules.

“We discuss things all of the time,” Ana said. “That’s what we like to do. We like what we are doing; otherwise, we would retire. We are being productive and helping develop the next generation of scientists through our postdocs.”

Gary Moore (no relation), a former student who received his PhD from ASU under Ana, is now himself a regarded professor and researcher at ASU. Having studied under the Moores, he provides perspective regarding their contributions: "Ana and Tom Moore have contributed pioneering discoveries in the areas of understanding, designing and controlling electron transfer pathways. The constructs they’ve envisioned over their careers have not only enabled conceptual advancements but are also synthetically and artistically beautiful. More recently, they’ve reinvented their research to focus on mastering the motions of protons. Their research continues to expand the frontiers of knowledge in the molecular sciences, and during their 45 years at ASU, has inspired generations of researchers. It’s a true pleasure to work with them. Their thoughtfulness, creativity and imagination appears boundless.”

SMS Director and longtime friend of the Moores Tijana Rajh added, “I have known Ana and Tom for many years, and one of the many benefits of coming to ASU has been to work more closely with them. ASU is fortunate to have Tom and Ana as members of the faculty. Their work is and will continue to be foundational to progress in many aspects of sustainability.”