Scott Seckel, 56, a senior reporter for ASU News and an alumnus of Arizona State University, died May 11.Seckel, a former journalist who graduated with a bachelor’s degree in journalism in 1990, covered a wide range of topics during his nearly seven years as a writer for the university’s news service, including engineering, sustainability and biology.“Scott was one of the most well-read writ... Former journalist, who died at 56, excelled at telling the history of ASU

Scott Seckel, 56, a senior reporter for ASU News and an alumnus of Arizona State University, died May 11.

Seckel, a former journalist who graduated with a bachelor’s degree in journalism in 1990, covered a wide range of topics during his nearly seven years as a writer for the university’s news service, including engineering, sustainability and biology.

“Scott was one of the most well-read writers I’ve worked with, and he was gifted at adding personality and historical context to stories that might have been dry in someone else’s hands. He was just so very interested in the world, and that made his writing richer,” said Penny Walker, director of ASU News.

“He started here at a time when we were shifting ASU News to a more mainstream audience, and he was a key part of making that transition successful — in showing that a story about research could be engaging, accessible and smart. He helped us to become who we are today.

"Scott was a big personality in our newsroom, but he wasn’t ruled by ego: He was always willing to help someone out with a story, whether that meant assisting another reporter with a tricky ledeA journalism term for the opening sentence or paragraph of a news article, summarizing the most important aspects of the story. or volunteering to write our student workers’ graduation profiles when he overheard them planning to write their own. He and his distinctive laugh will be very much missed,” Walker said. 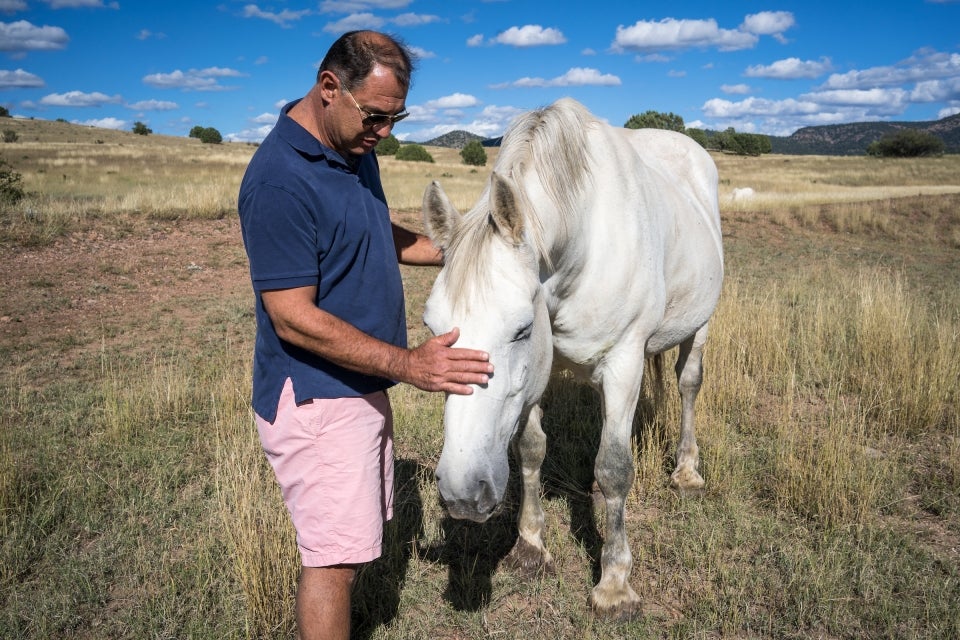 Scott Seckel pets a horse near Young, Arizona, while on assignment Oct. 5, 2018, for a story about an ASU professor's book on the Pleasant Valley War. Photo by Charlie Leight/ASU News

Seckel grew up in Sag Harbor, New York. After graduating from ASU, he lived in Hong Kong while writing for the South China Morning Post, and he later was a reporter for the East Valley Tribune and Agence France-Presse. He also was an author, publishing “Arizona Time: A Novel and Five Shorts,” in 2018, which was a finalist in the 2019 Arizona-New Mexico Book Co-Op Fiction Award.

Seckel was especially adept at long-form and historical stories about ASU.

One of his favorite stories was in 2019, a deep dive about Teddy Roosevelt’s visit to what was then Tempe Normal School, in 1911, and the seven students who served in Roosevelt’s Rough Riders and charged up San Juan Hill. He wrote:

“That charge, which happened 121 years ago July 1, propelled the Rough Riders into American myth. And when it was over, the hundreds of Arizonans in their ranks came home, rolled up their sleeves and went to work.

“They became Arizona's governors, postmasters general, adjutants general, clerks of the Supreme Court, state historians and legislators, deputy game wardens, superintendents of schools — just about any government position in existence. They put the final touches on a territory that had long yearned for respectability, transforming it from unruly child to honorable brother.

“The seven men who returned to Tempe Normal School were no different. This is their story.”

Seckel was interviewed on KJZZ about the story, and said:

“So Roosevelt was there to give a speech, and he wasn't supposed to even get out of the car because they are afraid he's going to take too long, too much glad-handing.

“But he jumped out of the car and gave this impromptu speech for 13 minutes and you could stand where he gave the speech today, on the second landing going up the steps of Old Main, and he talks about how Arizona is really ready to become a state.” 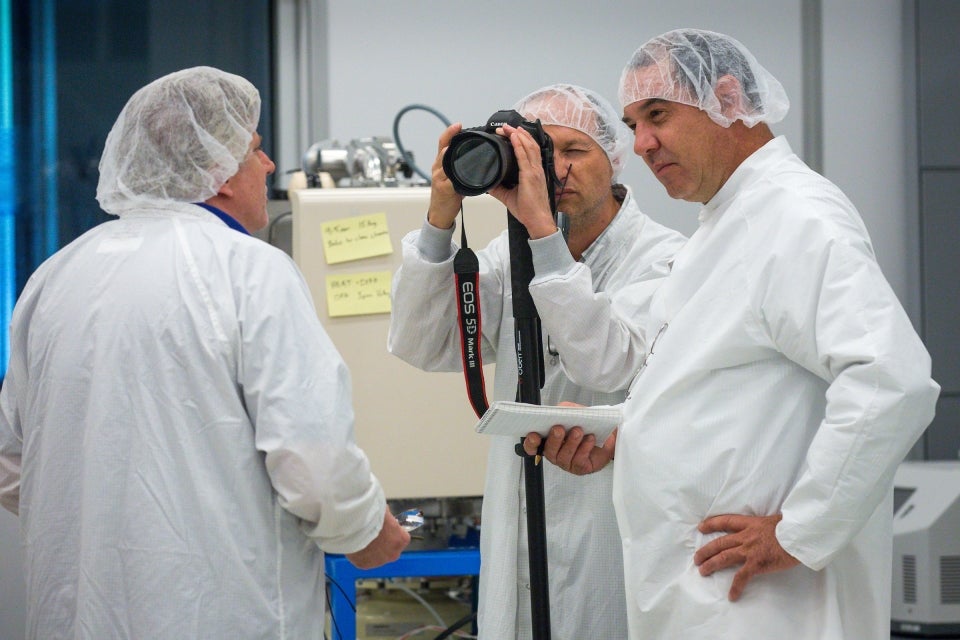 Last fall, he wrote a charming story about the 75th anniversary of Sparky:

“Dancing, prancing, crowd-surfing and crowd-pleasing, the pitchfork-wielding imp looks a lot different after seven and a half decades — who doesn’t? — but he’s passionately loved by his maroon and gold fans.”

The story recounted various efforts to get rid of Sparky, and Seckel threw down this laugh-out-loud line:

He turned an assignment on the 100th anniversary of the Palm Walk on the Tempe campus into a time machine that put readers into the dorms in 1916:

“What was life like for students the year the palm trees reportedly were planted? Let’s pull two names off the student rolls in 1916: Reathie Pfeifer of Phoenix and Howard Draper of Wickenburg. Both had roommates; all the dorms had were doubles. If it was hot out, they slept on sleeping porches. (The catalog goes to great lengths to describe dormitory sleeping porches. Having a sleeping porch in 1916 was like having air-conditioning in 1947. It was something you advertised that people sought out, especially Arizonans.) They paid $16.75 a month for room, board and utilities. Another dollar got their laundry done each month.

“Both Reathie and Howard ate in the dining hall. The food was good. Nowadays it would be touted as artisanal, local, organic. The school had 50 acres for crops, a dairy, a hog lot and a poultry yard, all producing eggs, meat, milk and vegetables for the students.”

Reporting from the field

Seckel’s words could bring a place to life, even if it was thousands of years old. In 2016, he traveled to Mexico, along with videographer Ken Fagan, to produce a three-part series on ASU’s Teotihuacan Research Laboratory complex, where an ASU archeology team is based. Seckel’s writing immediately draws you in:

“It’s A.D. 200. You are a Teotihuacano. You live in the first and biggest city in the Western Hemisphere in what is now central Mexico. …

“You live in a beautiful apartment. The floors are whitewashed with lime plaster. The walls are painted in red murals; jaguars prowl along the base, while priests wearing animal masks are symmetrically depicted above. …

“If you are a man, you walk outside the city to farm. If you are a woman, you stay home, watch the kids and ugly hairless dogs, tend the turkeys in their pens, cook on a three-pronged burner something like a hibachi, and do other domestic chores. …

“Your nearest neighbors, the Mayans, think you are the coolest people ever. They copy your clothes and your architecture, and tell everyone they are related to you. They think you’re so cool they continue to copy you for two centuries after you’ve disappeared.

“That’s what archaeologists, students and visiting scholars see when they come to work at Arizona State University’s Teotihuacan Research Laboratory in the adjacent village of San Juan Teotihuacan.” 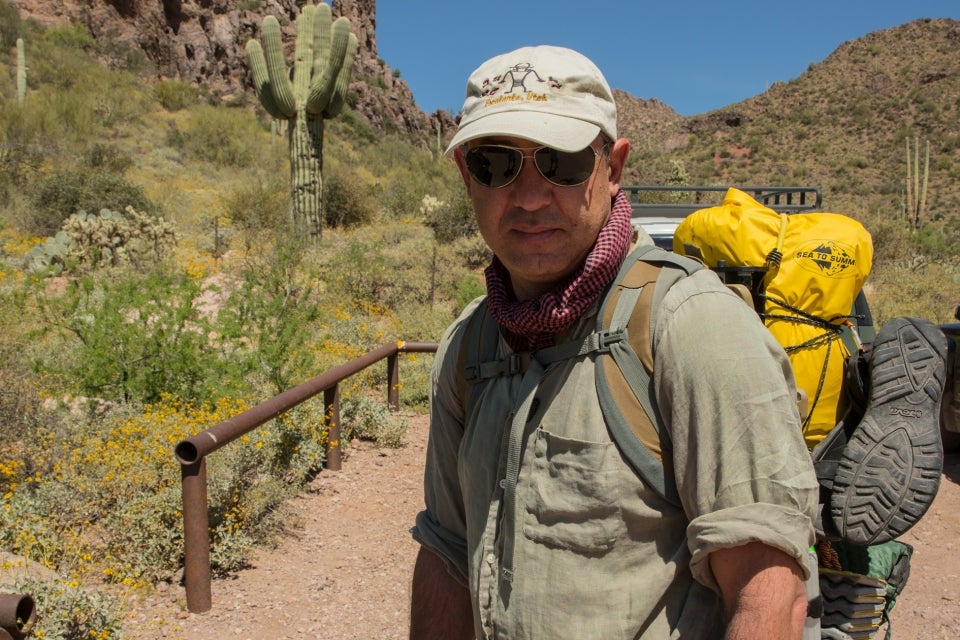 Scott Seckel takes ASU robotics researcher Tom Sugar's Pogo Suit for a test hike on the Peralta Trail in the Superstition Mountains on April 7, 2017. Seckel, an experienced hiker, would write about the experience for an ASU News story about the oscillating backpack. Photo by Ken Fagan/ASU News

Like all reporters, Seckel thrived out of the office, believing the best stories were far from a desk chair. In 2017, he went out to the Superstitions to field-test an oscillating backpack, called a Pogo Suit, invented by Thomas Sugar, a professor of engineering, to decrease the metabolic cost of lugging a heavy pack. Seckel, a seasoned hiker and backpacker, was eager to try out the invention. His verdict:

“It’s a really amazing feeling, after decades of backpacking, to have a giant hand come down and hold your pack up at a crucial second. It’s completely unexpected. It’s like suddenly being able to fly or breathe underwater or grab a hot coal.”

In 2019, Seckel traveled to the remote island of El Pardito in the Sea of Cortez to write about Jesse Senko’s mission to save sea turtles by partnering with Mexican fishermen to use solar-powered lights on their nets. Senko, an assistant research professor in the School for the Future of Innovation in Society, discovered that the lights repel the turtles, preventing them from being swept up in the nets.

Seckel, who reveled in the primitive conditions and the opportunity to be off the grid for a few days, wrote:

“The bay where the island is tucked is like Death Valley with water. Rocky scorched islands rise from the sea like giant extinct beasts, all haunches and spines and crouched tense flanks. Mangrove swamps apron some shores. Cactus forests crowd flats.”

A way with words

Not everything impressed him. In 2018, he participated in an ASU News video that showed volunteers assessing the effects of ASMR videos, for “autonomous sensory meridian response,” which are supposed to be relaxing. His response:

No one would accuse Seckel of having an overly tender heart, but he perfectly captured bitter heartbreak and soaring redemption in his story “Love and Loss in the Grand Canyon” in 2019, part of an ASU News project marking the 100th anniversary of the national park. He told the tale of an ASU math professor, Matthias Kawski, newly diagnosed with multiple sclerosis, and the journey he took with his friend, Andrew Holycross, after the death of Holycross’ wife at the Grand Canyon.

“Being a great outdoorsman is not about being great at one thing. It’s about being great at 1,000 little things. How to stay warm. How to stay cool. How to read terrain, maps and ground for routes that “go.” Or don’t go. How to assess risk, judge it and execute it. Where people like Holycross and Kawski go, something as small as a broken bootlace can lead to your death 48 hours later. Make one mistake, and problems combine, compound and get worse.”

One of Seckel’s most recent stories, in March, was about the new building at the corner of University Drive and Rural Road — ISTB7, later named the Walton Center for Planetary Health. He described the history of the site, the challenges of the construction and how it all came together. He wrote:

“The concept behind the building is a geode. The exterior is hard and crusty, but in the interior courtyard, there’s an abundance of light and sparkling glass.”

A memorial service will be held at later date.