On Deck: Baseball Concludes Regular Season in the Palouse Sun Devil Baseball will conclude the 2022 regular season this weekend on the road at Washington State with a three-game Pac-12 series scheduled to begin on Thursday, May 19. The series, which will be broadcast on Pac-12 Washington, will get underway at 6 p.m. AZT on Thursday, continue at 4 p.m. Friday and conclude at 12 p.m. on Saturday.

Since its inception in 2007, the Barlett & Steele Awards have blazed a high-visibility path of excellence in rewarding incisive business reporting that “tells us something we don’t know.”Starting this year, the Barlett & Steele Awards will expand the number of awards given for outstanding investigative business journalism to better recognize work done at regional and local news organ...

Since its inception in 2007, the Barlett & Steele Awards have blazed a high-visibility path of excellence in rewarding incisive business reporting that “tells us something we don’t know.”

Starting this year, the Barlett & Steele Awards will expand the number of awards given for outstanding investigative business journalism to better recognize work done at regional and local news organizations and honor outstanding young journalists. 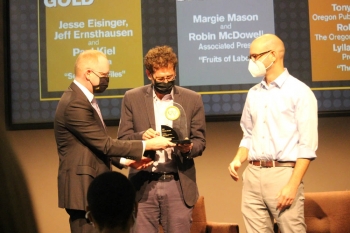 2021 Gold Award recipients from ProPublica receive their award at a Must See Monday event in Downtown Phoenix at the Cronkite School. Download Full Image

In addition, there will be a new annual award for Outstanding Young Journalist. This award will recognize the work of a journalist under 30 years of age who demonstrates outstanding ability in investigative business reporting. One award will be given each year, and it will carry a $3,000 cash prize.

The awards are named for the illustrious investigative business journalist team of Don Barlett and Jim Steele, who have worked together for more than four decades, receiving two Pulitzer Prizes, two National Magazine awards and a long list of other journalism awards. The annual awards are sponsored by the Donald W. Reynolds National Center for Business Journalism at Arizona State University’s Walter Cronkite School of Journalism and Mass Communication.

“The expansion of this award is a wonderful way to recognize even more journalists who are doing essential work to investigate and report on important issues in business and finance,” Steele said.

"Despite the challenges newsrooms are facing today — particularly smaller newsrooms — there is a lot of great business journalism being produced throughout the country," said Jeffrey Timmermans, Reynolds Center director. "We want to celebrate, and encourage, these efforts to keep American citizens informed about their economy and watch over the companies we rely on so much in our daily lives."

Last year, "The Secret IRS Files" series by ProPublica received the Gold Award for their investigative work exposing how the wealthiest people in America avoided paying their fair share of taxes at a time when wealth inequality has become a national crisis.

“These amazing revelations show just how – and how far – well-known members of America’s super rich go to slash their tax bills to the very minimum, or pay no taxes at all,” the judges said. “The reporters painstakingly vetted the figures for accuracy, did more reporting and clearly explained the findings with striking individual case studies and creative graphics.”

Entries for the Barlett & Steele Awards will undergo an initial vetting round by the faculty of ASU's Walter Cronkite School of Journalism and Mass Communication, with a panel of distinguished financial journalists making the final decision for each award.

Applications for entry begin June 1, with a submission deadline of July 31. The winners of the awards will be announced in October.

Entries must have been published or broadcast between July 1, 2021, and June 30, 2022. There are no entry fees for the Barlett & Steele Awards.