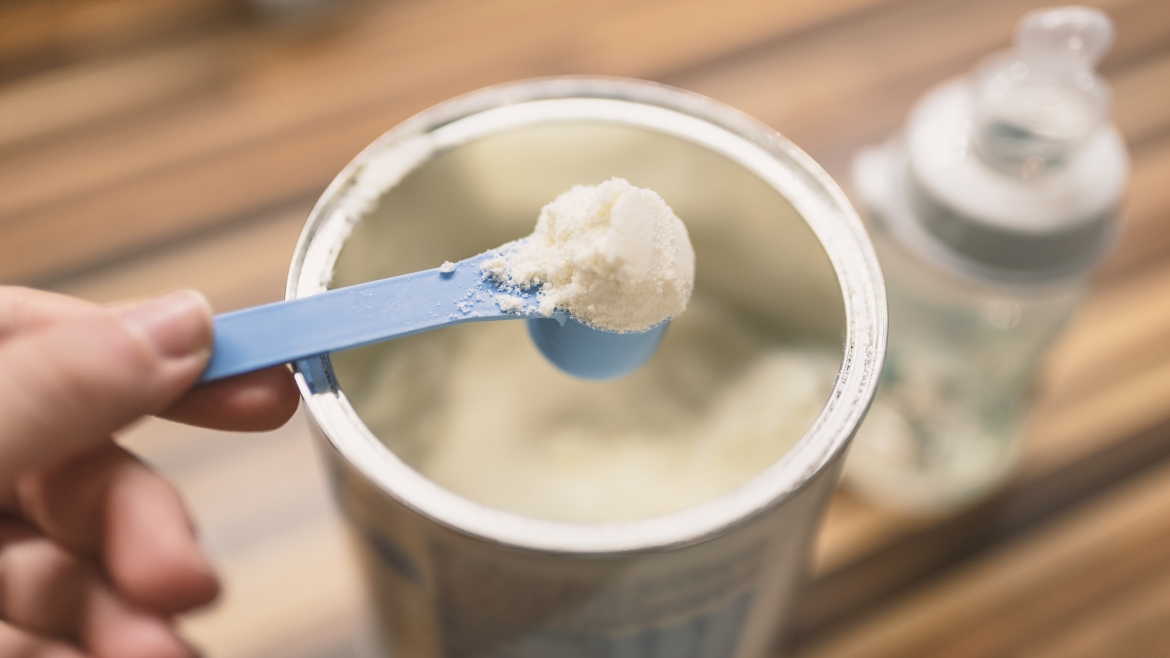 US must strategically plan for supply chain disasters

The baby formula crisis of spring 2022 has been like a “slow motion car crash” whose unfolding paralyzed the country, according to an expert in supply chain management at Arizona State University.

Hitendra Chaturvedi, a professor of practice in the W. P. Carey School of Business, said the shortage of infant formula that left store shelves empty and parents scrambling to feed their babies was the result of several factors, including inaction.

“It’s like seeing a crash happen in front of your eyes, and as humans, we have a habit of waiting for the crash to happen. It’s going to happen, and when it happens, we run to see if we can salvage something out of it.

“But everything is in slow motion and we let it happen and we don’t stop it. This is the same story.”

Chaturvedi said he sees more supply chain crises ahead. He answered some questions from ASU News:

Answer: There are four key reasons this is happening.

The first one, the blame goes to COVID. In 2020, when the demand of all the products went down dramatically, manufacturers brought down their production, and suddenly, in 2021, you see a bullwhip effect. For these kinds of products, the demand doesn’t change dramatically, so the factories are not structured to immediately increase or decrease production. They’re very steady.

The second reason was bacteria. Because of bacteria in the Michigan plant of Abbott, I believe four infants got sick and two died, and that caused the FDA to shut downOn May 17, the FDA and Abbott reached an agreement that will allow manufacturing in the Michigan plant to resume in about two weeks. the factory. You could say, “No big deal. We always do recalls. It happens all the time." But why is this such a huge problem this time? The third reason explains this better.

We have all the power in the hands of three big companies – Abbott, Mead Johnson and Gerber. They control over 90% of the market. Abbott alone controls 40% of the market. Narrow that down further and Abbott's Michigan plant controls about 40% of Abbott’s capacity, or 16% of the total market. If that plant is shut down when there’s already a shortage, the impact is easy to imagine. Imagine what will happen. In Texas and North Dakota and South Dakota, you had shelves that were 50% empty.

Q: What was the fourth reason?

A: The fourth point is our own trade policies. Our own FDA has very, very strict requirements on importing baby formula, even if they meet or exceed our food standards.

Then if some of those importers do come through with the right product, there is more than 17% tax on the product coming in. So we are throttling any imports trying to come in.

Q: Why do so few companies produce baby formula?

A: Remember during COVID when we had a meat shortage? You know what happened? More than 80% of meat processing is in the hands of four key processors. The meat processing plants were manned by a lot of immigrants who were working close to each other and many got COVID and many died. So production capacity was cut by 50%.

The problem is not that there weren’t enough hogs or cattle or chickens. In fact, many farmers were euthanizing their cattle because the production plants couldn’t take them.

The issue we’re seeing across the board and where you see problems arise is that there is a tremendous amount of consolidation happening in some industries.

It’s a double-edged sword. It can bring down prices a little bit, but if problems arise, they can raise their prices up and we cannot do anything.

Q: Is there no regulation of that?

We should be seriously looking at this consolidation trend that will leave consumers with very little choice.

Q: What is the overarching issue?

If you stop imports and have only three companies manufacturing and then shut the largest factory, it’ s not actually rocket science – it’s like watching a crash happen.

Here’s another point I tell my students: China is completely shut down at the moment. After the first supply chain shortage, we didn’t learn anything. The tsunami is coming, it just hasn’t arrived yet. And we’re not prepared for it. I have been saying this – we have to be on a war footing to diversify our manufacturing.

Q: How should we do that?

A: My take is that we are thinking about the (border) wall completely wrong. We should be thinking about how we create a self-sustaining strategy with Canada, the U.S. and Latin America.

We are not saying, “Let’s get away from China.” But any risk management strategy worth its weight in gold will tell you we need to diversify our risks.

Even after the first supply chain problems we had, do you think we’ve started manufacturing here, or at least have somebody on war footing trying to mitigate the risk? Absolutely not. I don’t see anyone working on it.

We are like an ostrich with its head in the sand saying, “This too will pass.”

We are captivated with the Ukraine war while our supply chain is still extremely weak.

The government runs a program called WIC (Special Supplemental Nutrition Program for Women, Infants, and Children). They are the largest buyer of baby formula. So if I’m in the procurement department and I have only three suppliers, I would have an alternative supply chain or risk mitigation strategy for my supplier base. I would be working very closely on that.

Q: Can the U.S. become a manufacturing powerhouse again?

A: Our labor rates are too high. But yes, some key components should be manufactured in the U.S.

But we can figure out if Latin America is an option. It’s not an overnight strategy and will take time. If we are able to help them build their economies, their standards of living will go up and we will see less people crossing the border illegally. And we will not be limited only by ships at sea as a mode of transport. We will have land.

And they have now (a) younger generation than even China. Their labor rates are less than China.

We’re not saying to be protectionist. All we’re saying is that in the corporate world, every company has a risk management strategy. Databases are stored in multiple servers so if one catches fire you have a backup. We don’t have a backup.

Beneath green canopies of towering trees, vivid colors flash by on outstretched wings, while underfoot, a small green tree frog leaps onto a large leaf. In the distance, a chimpanzee reaches for a fruit hanging above his head. This is a tropical forest, rich with life and teeming with biodiversity. While covering only about 6% of the Earth’s surface, tropical forests support more than 80% of the...

Beneath green canopies of towering trees, vivid colors flash by on outstretched wings, while underfoot, a small green tree frog leaps onto a large leaf. In the distance, a chimpanzee reaches for a fruit hanging above his head. This is a tropical forest, rich with life and teeming with biodiversity.

While covering only about 6% of the Earth’s surface, tropical forests support more than 80% of the world’s documented species. And these ecosystems are one of the oldest on the planet. Yet human development and a changing climate threaten the forests’ ability to function properly. 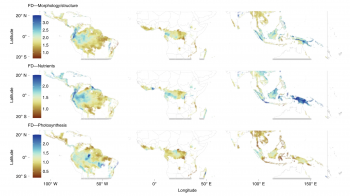 To protect and restore tropical rainforests, Arizona State University researchers joined a study led by Oxford University to uncover critical information about the forests and their ability to respond to the impacts of climate change.

The study looked at functional diversity, or the range of functional traits that an ecosystem needs to operate. In the study, published May 16 in Nature Ecology and Evolution, the team of researchers mapped out the functional diversity of forests. The findings demonstrate that drier forests are less functionally diverse, meaning that they may be less resilient in the face of increasing droughts.

“For thousands of trees distributed all across the tropics, we collected information of certain characteristics that allow them to respond to changes in the environment, such as increasing droughts, which we call ‘functional traits,'” said Jesús Aguirre-Gutiérrez, lead author of the study and senior researcher with the Environmental Change Institute at the University of Oxford. “Using this information, we built models to understand if and how the diversity of functional traits increases the resilience of forests to climate change.”

Spanning 74 sites and four continents, the team used local climate data for the past 50 years combined with data on 16 different plant traits sampled from 2,461 individual trees. This combination of data allowed the team to gain a big picture view of the forest changes, specifically how the forests’ responses to climate change differ based on the dryness of the ecosystem. Overall, drier tropical forests are less functionally diverse and more functionally redundant — many species perform the same roles.

“This research informs conservation efforts by identifying regions more susceptible to climate change, allowing managers and policymakers to take more targeted and educated action,” said Greg Asner, co-author of the study and director of the Center for Global Discovery and Conservation Science. “We must discover where and how to invest for long term ecosystem resilience.”