Sun Devil Baseball's Nate Baez was named the Pac-12 Player of the Week on Monday, as announced by the league office.

Editor's note: This story is part of a series of profiles of notable spring 2022 graduates.Arizona State University online student Gretchen Kane sat at home in her small Pennsylvania community, and participated via Zoom in a ceremony honoring ASU’s latest inductees into the Tau Sigma National Honor Society.The event welcomed students who demonstrated high scholastic achievement into a prestigi...

Both have stories of perseverance to achieve academic, career goals 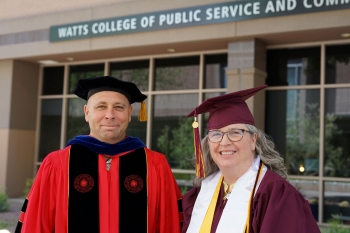 Watts College of Public Service and Community Solutions Associate Dean William Terrill (left), and Gretchen Kane, who received her online bachelor's degree in public service and public policy May 9, stand in front of the University Center on the Downtown Phoenix campus earlier in the day. Both Terrill and Kane are from the small community of Pottsville, Pennsylvania, population 13,346, and agreed to meet once Kane arrived in Phoenix from Pennsylvania for ASU's spring 2022 commencement. Photo by Mark Scarp/ASU Download Full Image

The keynote speaker at the event was Professor William Terrill, associate dean of the Watts College of Public Service and Community Solutions, who administers the college’s Interdisciplinary Programs.

“As I was presenting to the honor society there were dozens of students in the Zoom session, and it can be hard to ‘read the room,’ so to speak, as to whether anyone is truly listening, or if I’m getting my message across,” Terrill said later.

Terrill told the group that he grew up in a small Pennsylvania town as well, and as Kane heard him recount his story, she said she felt as though he was chronicling her own life.

“As you continued to speak and share your story,” Kane wrote Terrill a few days later, “I was so taken aback by your honesty and compassion. I share a very similar story … and felt as though you were looking into my life history and telling my story.”

Terrill talked about how hard work and perseverance led him to achieve his academic and career goals. Somewhere during his talk, Kane realized that Terrill had grown up in the very same town, Pottsville, Pennsylvania, and attended the same high school she had.

The 50-year-old Kane, who returned to college many years after graduating from high school, told Terrill that her graduating with highest honors “is a huge accomplishment for a girl who in high school was often told that college just was not for me, and that nothing was wrong with working at McDonald’s.”

Kane went to community college and became a dental assistant, successfully working in that field for 26 years, yet finding herself “feeling unaccomplished,” she wrote Terrill. Then she started a job with the U.S. Department of Veterans Affairs.

One day in 2018, her car radio played a commercial sponsored by ASU talking about the benefits of online degrees. Her mother had recently passed away, she said, which led her to realize that “nobody was holding me back from my dreams but myself, and I decided to take a chance on me.” She was just offered a job with the VA as an emergency management specialist.

Kane flew to Phoenix and attended her graduation ceremonies in person. Terrill and Kane had lunch on May 10, the day of the Watts College convocation.

Terrill said moments like the one he had speaking that day have great meaning.

“When you hear about students who have overcome doubts and obstacles along the way to achieve academic success and their career goals it is always special,” Terrill said. “When you hear about someone from your same small hometown, and who has a pathway so relatable to your own, it is extra special. While education is not always emphasized in the coal mining region of Pennsylvania, hard work most certainly is, and when someone combines a commitment to education along with such a work ethic, dreams come true.”

Read on to learn more about Kane and Terrill’s hometown and Kane’s remarkable ASU journey of dedication to a goal:

Question: Tell us more about your hometown, the same one as Professor Terrill.

Answer: Pottsville is a city located in east central Pennsylvania. It is approximately 90 miles northwest of Philadelphia and 140 miles west of New York City. The population, according to the 2020 census, is 13,346. The city was founded from the discovery of anthracite coal in 1790. The coal industry was the principal driver of the local economy until the decline of coal in the mid-20th century. The city remains very much blue collar today.

Pottsville is notable for Yuengling Beer, America’s oldest brewery, founded in 1829, writer John O’Hara and for the Pottsville Maroons. Unbeknownst to many, but Pottsville had an NFL team, the Maroons, which earned the 1925 NFL championship only to have it controversially taken away by the NFL commissioner and awarded to the Chicago Cardinals. It is said that the “Curse of the Maroons” will forever prevent the Arizona Cardinals from winning the Super Bowl until the title is rightfully returned to Pottsville. Interestingly, it is another element that ties Pottsville to Arizona.

Q: Talk a bit more about what went into your decision to further your education.

A: I had always wanted to get my bachelor’s degree, yet after graduating high school, I felt that I did not have many opportunities. After working for a year after graduating, I decided to attended Northampton County Community College, where I received a specialized diploma in dental assisting.

Over my 26 years in dentistry and working my way into more advanced roles, I could never shake the feeling that I was missing something. Realizing I had come to a point where I no longer could grow in the field and that I was no longer challenged, I wanted more from my career. Yet knowing that my time in dental work was very special and that I enjoyed it immensely, if I was to make a change, I knew I wanted it to afford me the same satisfaction. I’d say I felt this way for a few years, and I almost succumbed to the thought that I was going to just spend my entire career in the same position. I really felt like I didn’t have much to offer outside the walls of my dental office. In the movie “The Shawshank Redemption,” they say how one becomes “institutionalized,” and that was how I felt about dental work. Was I even capable of doing anything more?

A: My “aha” moment came in 2016 when I was asked to sit in an emergency management committee meeting for my supervisor at the VA, who was unable to attend. Unsure of what this entailed, I went with an open mind and attitude. What I witnessed changed my whole career outlook. I was immediately drawn into the conversation, but more importantly, I felt I could relate to the discussion. When I struck up a conversation with the then emergency management specialist, he was so supportive of my interest and took me under his wing to help me understand the field more. He was a great role model, offering me sound advice, introduced me to FEMA classes and offered volunteer opportunities to help build my awareness and experiences.

A: In June 2017, I had suddenly lost my mom. It was a very hard time and I felt lost. She was such an important role model for me and someone I admired so very much. I began to let self-doubt about a career change creep in. I felt like I had some opportunities to apply for positions and was overlooked because of 1) limited experience or 2) not being viewed as a serious candidate for the position.

I will admit I do understand that 26 years in a given role is a very long time, and to make such a dramatic career change does bring with it more questions than answers. However, on my morning commute to work, I had begun to hear the commercial for ASU online degrees. Deciding to look into the application process, I was both surprised and excited that a degree in emergency management and homeland security was offered. It was 100% online and flexible to my schedule, I took this as a sign that this was the path I was to be on.

Q: What do you hope to do with your degree?

A: While pursuing my academic studies with ASU, a position within my facility (the U.S. Department of Veterans Affairs) for an emergency management specialist was posted. I am pleased to say that it was offered to me and I accepted.

I cannot speak for the team who interviewed me, but I do believe that my dedication and desire to obtain my degree in the field was an element that placed me above the other candidates. This position has afforded me an opportunity to see opportunities locally, and nationally. My goal is move above the facility level position and work at the next tier such as the Veterans Integrates Service Network (VISN) or the Office of Emergency Management (OEM).

Q: What’s the best piece of advice you’d give to those students following behind you, particularly those coming from similar circumstances?

A: It is never too late to follow your dreams. I turned 50 in January and I honestly do not know if five years ago, you would have told me that I was about to graduate with a bachelor’s degree, that I would have believed you. Yet, with hard work, continued belief in myself and the support of my family and friends, I am about to graduate with high honors from a nationally ranked school. It just goes to show that anything is possible if you are willing to take a chance and do the work.

Q: What’s the most important thing you’ve learned at ASU – about yourself, about what you’re studying, anything – that came to you as a complete surprise?

A: Appreciate what others think of my work. Whether it is positive or negative feedback, I take that opinion and learn from it. With so much apprehension about returning to school at an older age, I felt like my initial responses if negative were a reflection that I was too old to do this. Yet, in retrospect I can see how this advice made me a better student and has prepared me to excel within my field of study. As an emergency management specialist, I am responsible for overseeing multiple programs, and as a leader someone may challenge my direction. Yet I have learned that this is not because they see it as wrong but how we can make something better.

A: Clean water is not only a global problem, it is a concern in our own communities. Locally, we have had a history of poor environmental regulation. When I was a child, you would never dream of fishing in the Schuylkill River. Yet, with more stringent regulations and enforcement against polluting, the waterways have recovered enough that today, with the help of the Pennsylvania Wildlife Commission, they are able to sustain fish. That is something I never thought would be possible. I would like to see more resources directed towards the protection of these vital natural resources.

Q: What’s your life motto in one sentence?

A: “Go confidently in the direction of your dreams! Live the life you've imagined.” ― Henry David Thoreau