‘Do what you love’: First-generation college student brings stories to life in theater design and production

Graduating senior April Maytorena worked on the recent Arizona State University theater production of “La Comedia of Errors,” a bilingual retelling of Shakespeare’s “Comedy of Errors.” Maytorena used clay to mold and create the exaggerated facial features for the production’s masks. She said the experience helped her feel connected to her grandmother on her mother’s side, who was talented with sewing and handicrafts. 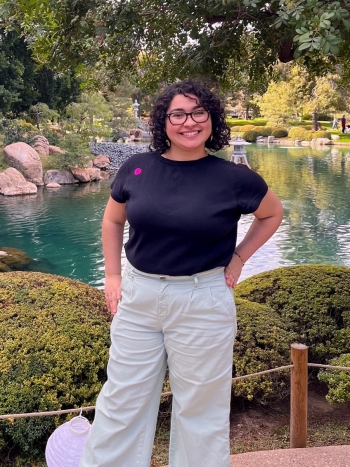 During her time at ASU, April Maytorena’s focus has been on costume and props technology. Download Full Image

“She created a lot of things by hand with clay,” said Maytorena. “For me, I love being part of the creative process that brings stories to life.”

Hailing from the border town of Rio Rico, Arizona, Maytorena is a first-generation Mexican American college student. She is graduating with a Bachelor of Arts in theatre with a concentration in design and production from the School of Music, Dance and Theatre.

Despite her artistic tendencies, Maytorena hadn’t considered studying theater in college — she wasn’t even sure she was going to attend college — when her high school theater director suggested ASU. She had just finished performing in “Little Shop of Horrors” and loved being part of theater, but she wasn’t interested in being on stage again.

“I didn't want to do acting,” Hernandez said. “I’m so thankful for the design and production program. They told me, ‘It’s OK if you don’t know much. We’ll teach you.’”

During her time at ASU, Maytorena’s focus has been on costume and props technology. She has had a hand in almost every main-stage production. Some of her credits include props artist for “Tigers Be Still,” stitcher for “CREAM!,” props head for “The Snow,” first head for “Hedda Gabler” and wardrobe supervisor for the “Emerging Artist” dance show.

The skills she gained even led her to a position as an alteration specialist for David’s Bridal. She said she wanted to take advantage of every opportunity that came her way.

“I just throw myself into things and hope for the best,” said Maytorena.

“She is an outstanding individual who has grown immensely during her four years with us,” said Connie Furr. “She is well versed in costume technology and has distinguished herself in this area. She is also an outstanding collaborator working diligently to produce high-quality costumes and props for theater and film productions.”

Question: What was your “aha” moment where you knew what you wanted to study?

Answer: I like to think back to my freshman year where I first got to create something others could enjoy. Our final project was to design for the dance show “Come AZ You Are.” We got to collaborate with the dancers. I was so excited to work with the dancer and create something. The dancer I worked with, her piece revolved heavily around her Navajo heritage. She gave me all this research to work with, and it was such a nice collaboration between us. Going through that was just like a great experience, to come together and create something.

A: One thing that really surprised me was the amount of diversity in race, sexual orientation and gender identity there is here. Coming from a small town where all this isn’t talked about, it was surprising to come to the city and see how freely people talk about it. It was a bit of culture shock. I like how it helps build a community where we can be ourselves and connect with one another.

A: I can’t say just one professor. I’ve worked with so many along the way, and they all taught me so much, whether sewing advice or life advice or something else. They all just inspired me so much. After all this time, it’s really a community for me, all the people who have fed me all along this journey. Last year during the summer, (Costume Shop Supervisor) Cari Smith and I were talking about shows, and she said, ‘It's not for the money, it’s about making art.’ I just sort of had a moment of realization. I thought — oh my goodness — I’m an artist.

A: It’s kind of cheesy, but my best advice would be to do what you love. If you’re going to spend a lot of time doing it, you should pick something you enjoy.

A: I'm always in the costume shop or the scenic shop. But when I get out of the building, one spot I love is by the Student Services building, near the Memorial Union. There’s this little spot — it’s very green and there are trees and a lot of shade all semester. I love to just go there and relax and eat my food.

A: I have been hired as an apprentice at the Santa Fe Opera as a stitcher. It's just for the summer. The plan so far is to come back to the Valley and work around any theater shops that are hiring. I want to work in theater one way or another. As a lover of the arts in all its forms, I hope to keep on creating with like-minded individuals.

A: First, I’d get myself and my family out of debt. I would definitely put money towards the arts in schools, especially those who don't get as much funding for the arts compared to sports — here in the Valley and also in smaller towns. And then some for homelessness. It seems like there’s always enough money for war, but not enough money to actually house people. Forty million dollars just doesn’t seem like enough! It’s so much money, but at the same time, you can only do so much with it.

Editor's note: This story is part of a series of profiles of notable spring 2022 graduates.It’s not easy to gain deep expertise in the more complex areas of engineering and technology, and it’s even more difficult in fields that are rapidly evolving and birthing new questions and mysteries.But Kristen Jaskie says she’s a perfect fit for the challenges posed by the advanced studies and...

It’s not easy to gain deep expertise in the more complex areas of engineering and technology, and it’s even more difficult in fields that are rapidly evolving and birthing new questions and mysteries. 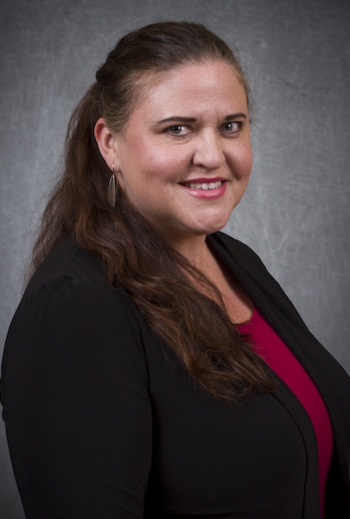 But Kristen Jaskie says she’s a perfect fit for the challenges posed by the advanced studies and research she has been involved in for seven years.

“I am by nature very stubborn,” Jaskie says, which has served her well in both higher education pursuits and her personal life.

She is currently a postdoctoral research scholar and adjunct professor in the School of Electrical, Computer and Energy Engineering, one of the seven Ira A. Fulton Schools of Engineering at Arizona State University. Her primary research focus is on novel applications of machine learning, which is interconnected with the broader field of artificial intelligence.

Jaskie uses machine learning and deep learning algorithms to solve complex problems with large amounts of missing data. Her work focuses on semi-supervised learning and the positive and unlabeled learning problem. Algorithms like these can be used in medicine and other scientific and commercial applications.

She is the author of some of first research papers reporting on advances in these emerging areas, and a book she has written, “Positive Unlabeled Learning,” has recently been published.

The publications stem from much of her doctoral studies at ASU focusing on signal processing and machine learning. Her doctoral dissertation is titled “Positive Unlabeled Learning – Optimization and Evaluation.”

Her achievements have now earned Jaskie the Palais Outstanding Doctoral Student Award, which is bestowed on graduating electrical engineering doctoral students who exemplify excellence in both research and academics. To qualify, a candidate must maintain at least a 3.75 grade-point average and have at least one publication in a journal or at a conference.

The award was established in 2003 through the generosity of ASU Emeritus Professor Joseph Palais and his wife, Sandra Palais.

From 2011 to 2018, Jaskie was a computer science faculty member at Glendale Community College near Phoenix and served as the department chair in her last two years there before returning to ASU to pursue a doctoral degree.

“Kristen was one of our very best graduate students,” says Fulton Schools Professor Andreas Spanias, director of the Sensor, Signal and Information Processing Center, or SenSIP, an industry consortium. “She contributed in an exemplary manner through her doctoral research, teaching, mentoring students in SenSIP’s Research Experience for Undergraduates and International Research Experience for Students programs, and our National Science Foundation workforce development program.”

Today, in addition to her postdoctoral researcher duties, Jaskie is leading the machine learning research operations of a small company in the defense industry.

“I love both teaching and research,” she says, so becoming a research professor and then a full professor are among her plans for the future.

Jaskie faced some challenges during the years she has been progressing through her advanced studies.

“I was doing PhD studies full-time and supporting myself and my family while my husband was also in school. It was a difficult time. But I can be very stubborn,” Jaskie says. “I was determined to get the degree. So, I stayed focused and I got it done.”

Today, she says she is “most proud of persevering in following my dreams and achieving my academic goals while also being a good, present and caring mother and wife to my family.”

She recalls her son spending a good part of his early years with her while she studied, and she notes that her intense interest in her work has influenced him.

“He is 6 years old now,” Jaskie says, “and he tells people he wants to be a scientist or an engineer. He’s not sure yet about which one.”