Arizona State University’s Durham Hall has been transmogrified, in the words of one of its inhabitants, from “one of the ugliest buildings on campus to one of the most beautiful.”Thus said Nina Berman, director of the School of International Letters and Cultures, at Tuesday’s rededication of the newly renovated building.Dean of Humanities Jeffrey Cohen talked about seeing the building when... 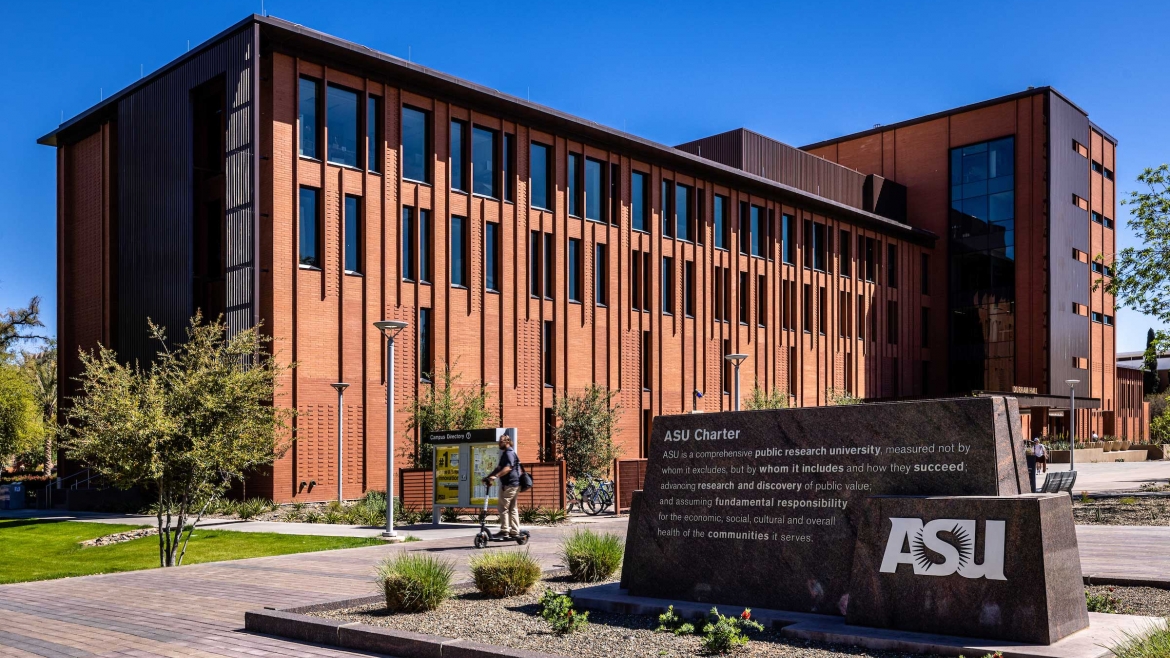 Arizona State University’s Durham Hall has been transmogrified, in the words of one of its inhabitants, from “one of the ugliest buildings on campus to one of the most beautiful.”

Thus said Nina Berman, director of the School of International Letters and Cultures, at Tuesday’s rededication of the newly renovated building.

Dean of Humanities Jeffrey Cohen talked about seeing the building when he arrived on campus: “It was not a pretty sight,” Cohen said. “I’m pretty sure I saw a mushroom in the basement.”

The three-year, $65 million project has transformed the old Language and Literature Building from an eyesore outside and what Berman called a “health hazard” inside to a sleek, light-filled, state-of-the-art facility able to hold its head alongside the campus’ newest additions. 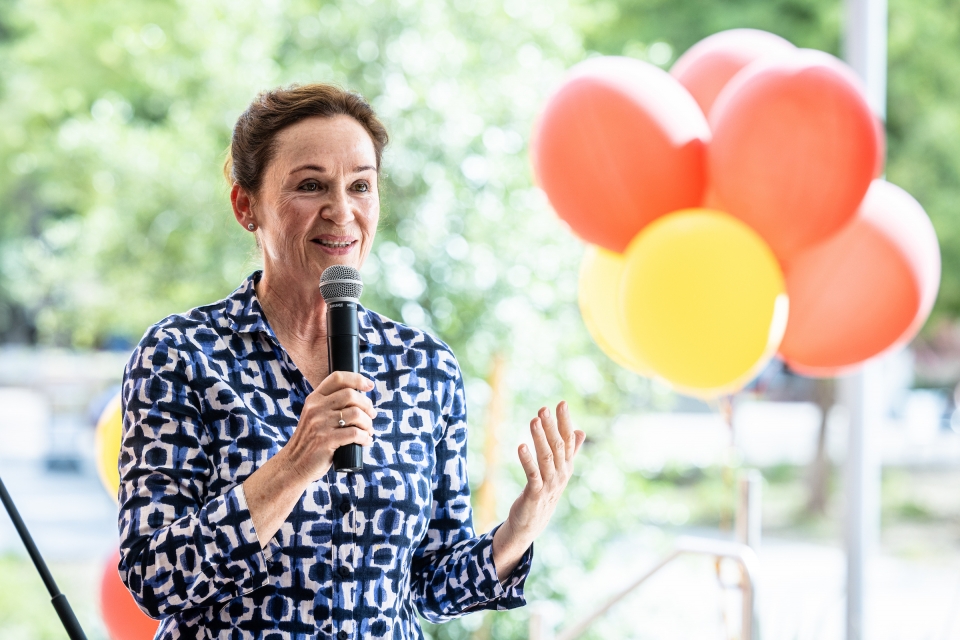 Professor Nina Berman, director of the School of International Letters and Cultures, speaks at the grand reopening of Durham Hall on April 26. Photo by Charlie Leight/ASU News

Now home to the School of International Letters and Cultures, Durham features an open floor plan lobby with plenty of seating, a café where five TVs broadcast the news from five countries, small group study rooms, floor-to-ceiling windows in some spots and glass-walled offices.

Now home to 11 humanities centers, more than 20 languages are taught there. Ten thousand students use it every day.

The basement language lab is gone. (Technology made it obsolete.) The only thing that remains unchanged are students mangling Mandarin and Spanish in the halls.

In ASU’s tradition of sustainability, the decision was made to repurpose the building rather than tear it down and build from scratch, even though that would have been easier.

“This was my most frustrating project because of how long it took,” Crow said. “Hopefully it’s reinvigorated for another 50 years.”

“A workhouse building,” university architect Ed Soltero called it. Nearly all undergrads have passed through its doors since 1964.

“The campus has a history of growing in spurts,” Soltero said. “One of the things we’ve been trying to do is honor our historicity and create a historic foyer for the university.”

Details from Old Main aren’t actually copied in the new design, but they are alluded to. The exterior has been reclad to match the brick of Old Main and the University Club to the east. Walk over to Alumni Lawn now and there’s a nice fit between the three buildings now instead of two swans and an ugly duck. 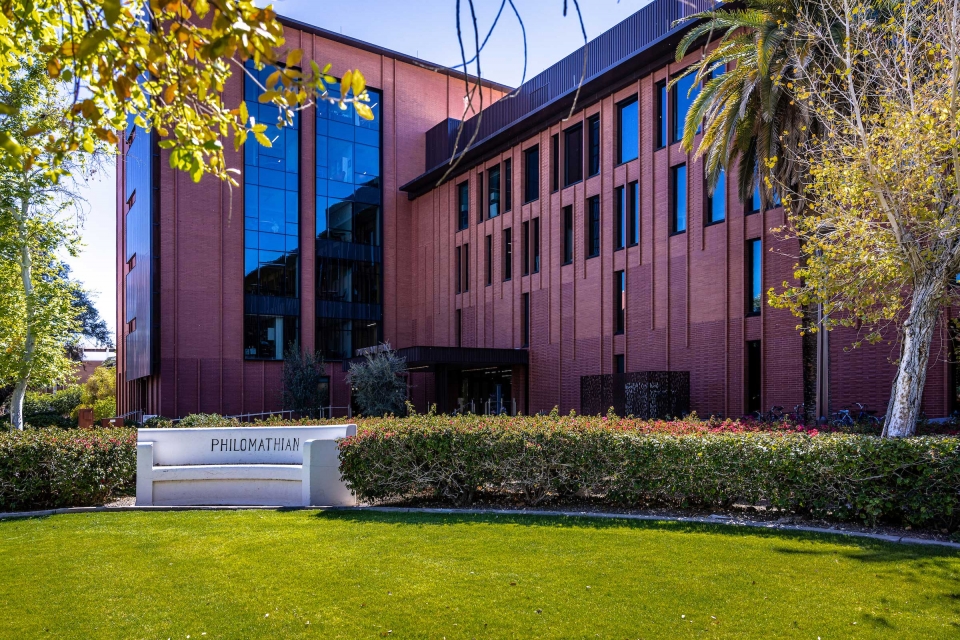 The east side of the newly renovated Durham Hall. Photo by Charlie Leight/ASU News

Durham is the first building prospective students — and parents — see on campus tours. Architect and senior associate Elizabeth McLean at Ayers St. Gross, the firm behind Durham (and Hayden Library), said there were unique challenges around the fact that it is a gateway project. The building couldn't afford to have a grand entrance and it was between two different character zones: Cady Mall and Alumni Lawn.

There was also the sustainability mandate.

“We were able to adapt a hundred percent of the existing building and save 73% of the structural system, which is where the embodied carbon is primarily located,” McLean said. “It helps us divert what would've been an investment into creating a new building here, so preserving the building instead of tearing it down is giving it a new life with a sustainable approach. On the interior, it was important to consider the learning environment. We needed to design for change.”

They took the long narrow hallways and set up environments for collaboration outside of classrooms – very useful in a place where practicing languages together is a daily necessity.

“Conversations with the campus community had revealed that the interior environment was inhospitable to teaching and learning, and working too,” McLean said. “So it led to an analysis that informed our approach to peeling off the envelope, which allowed us to address a lot of aesthetic concerns and goals for the university, but perhaps more importantly to provide daylight and views and increased glazed openings.

"So it directly influences your experience when you're in the classrooms or when you're in a shared collaboration space or even in a workspace on the upper level. I think that's really important.” 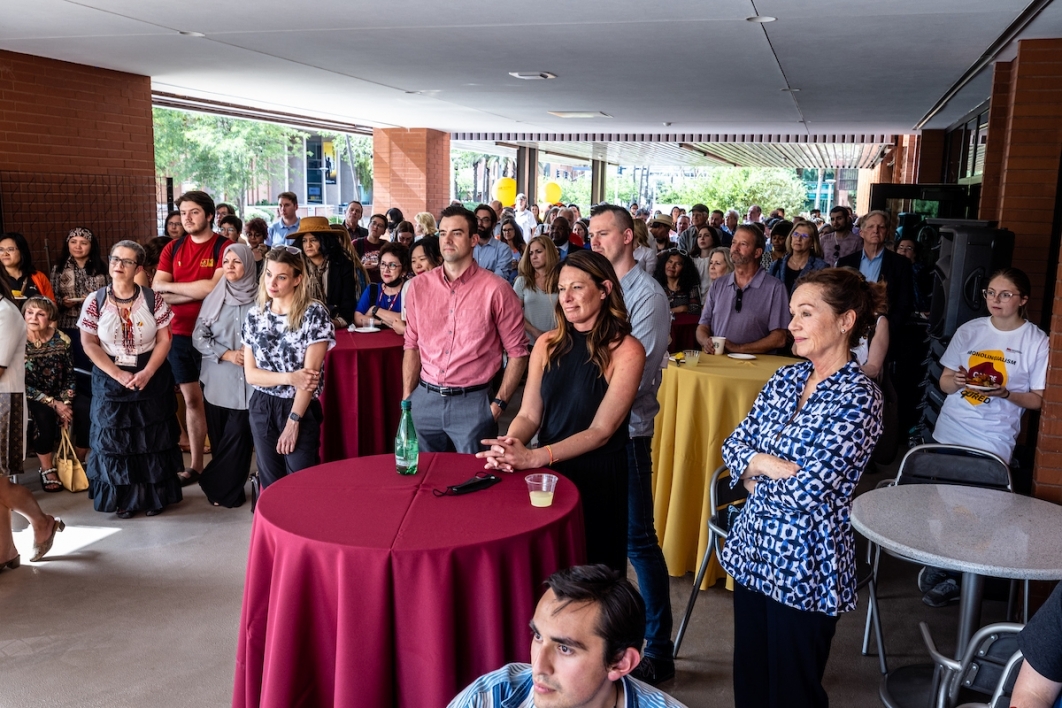 More than 100 people attended the grand reopening of Durham Hall on Tuesday, April 26. The newly renovated and reimagined space is focused on advancing global research, languages and cultures. 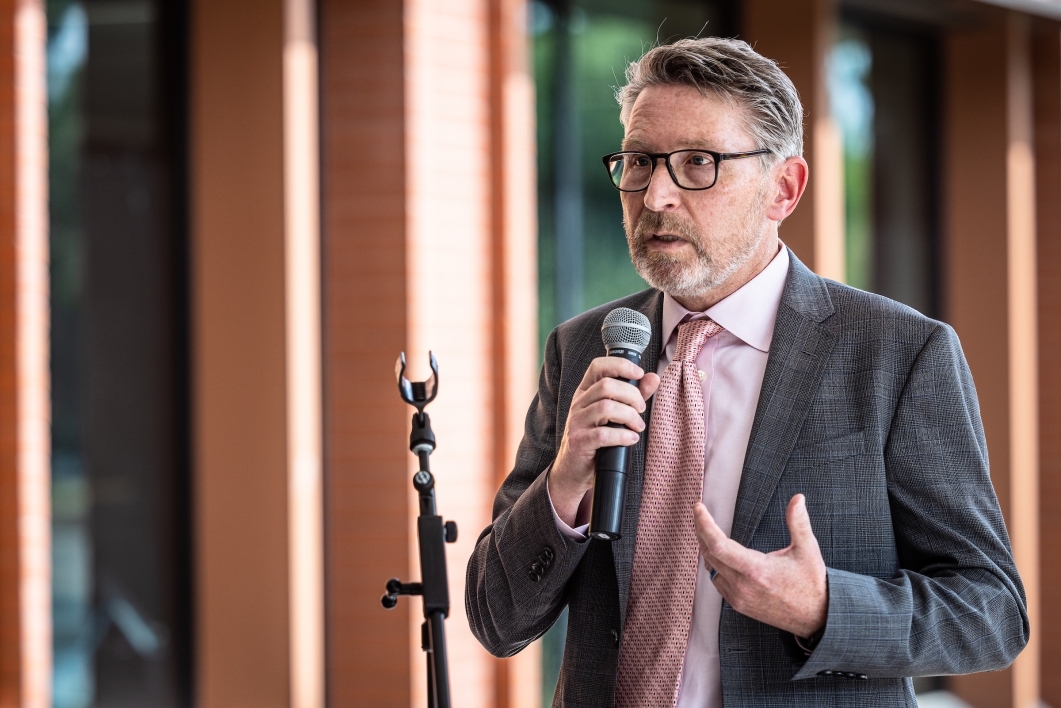 Dean of Humanities Jeffrey Cohen speaks at the grand reopening of Durham Hall. The building is now home to 11 humanities centers. 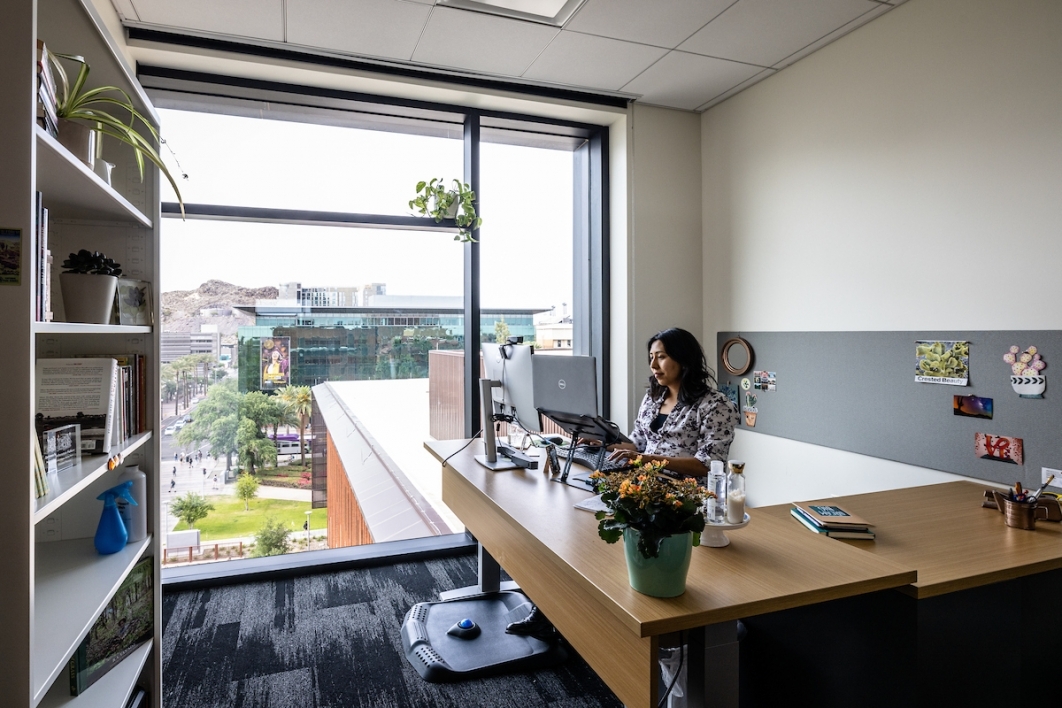 Gionni Ponce, the program manager for the Center of Imagination in the Boarderlands, works in her new office at Durham Hall. 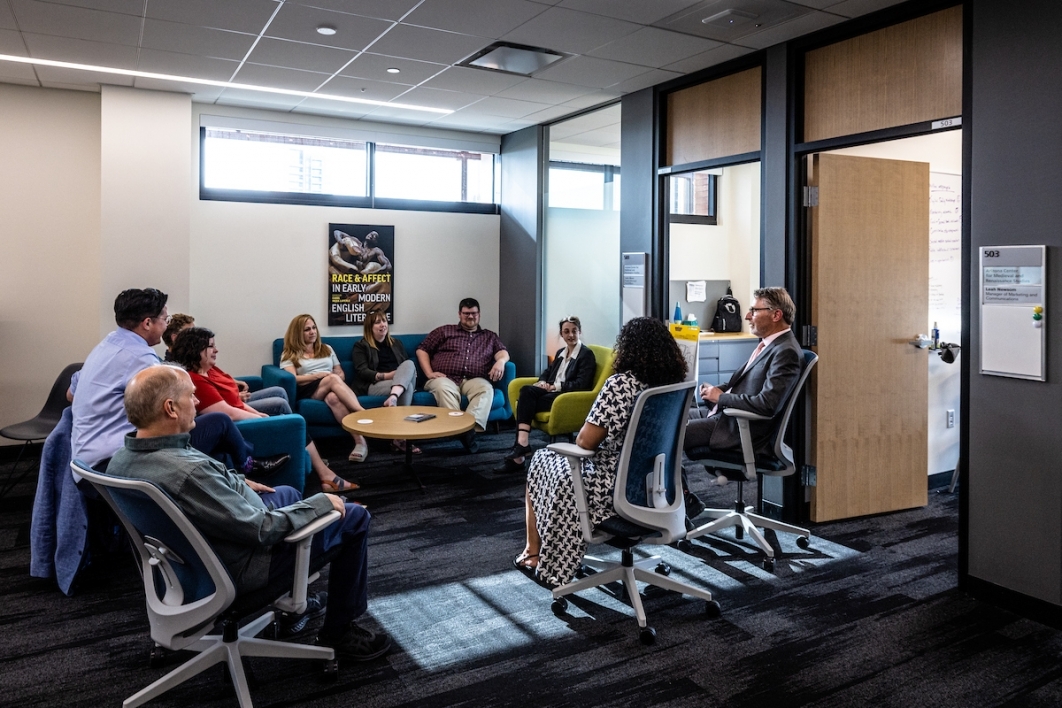 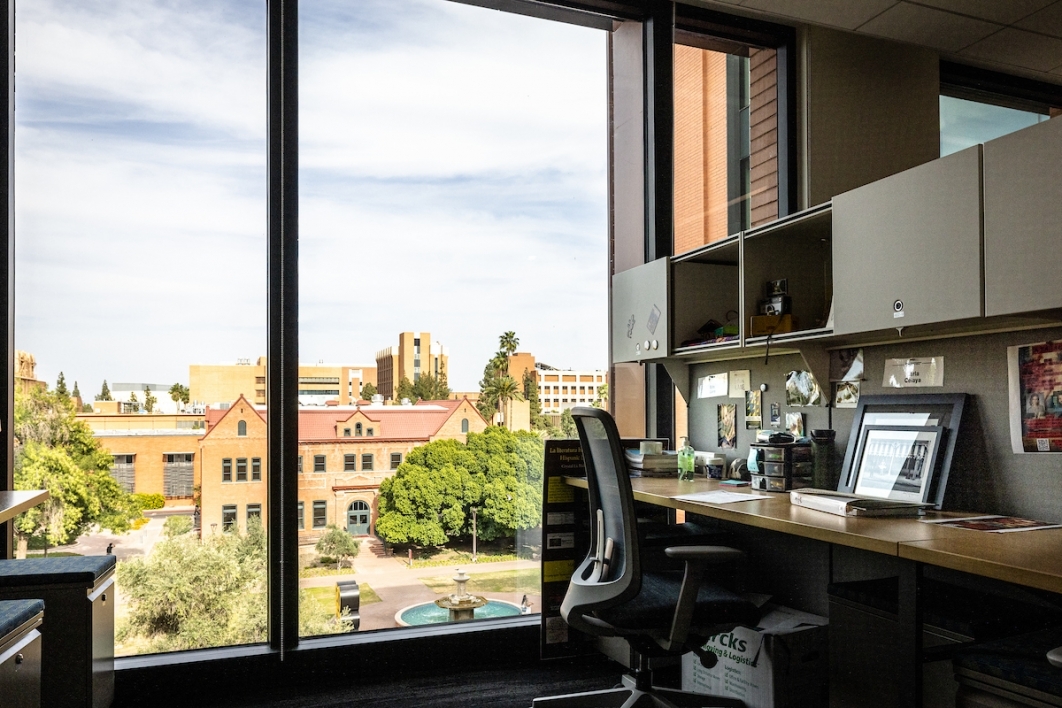 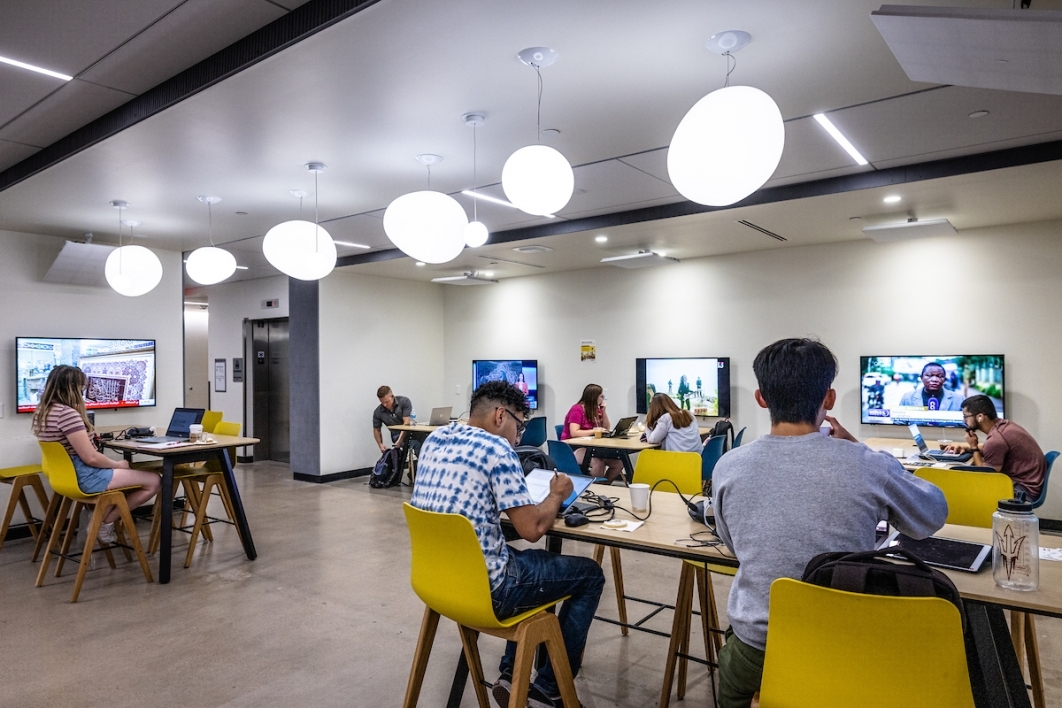 And it worked. Berman said the building motivates students and faculty.

“We felt more valued when we moved into it,” she said.

The building was named after G. Homer Durham, ASU president from 1960 to 1969. A devout Mormon, he supported himself during his own undergraduate years by playing trumpet and piano in small dance bands. After ASU, he was the first commissioner and executive officer of the Utah System of Higher Education. The Vietnam War and campus protests raged during Durham’s tenure.

“I don’t think any president survived that,” Crow said.