After 36 holes and at the halfway point of the 2022 Pac-12 Men's Golf Championship in suburban Seattle, ASU finds itself in a good spot, down just four strokes to host Washington.

Demi George grew up in Minnesota, but she spent many spring breaks in Arizona visiting her family, splashing and swimming in her grandmother’s retirement community pool. While shopping for swimsuits for one trip, she realized there was a problem. Swimsuits that provided adequate coverage in some areas were too big in others. She had to tie the sides of her swimsuits just to get them to fit prope...

Demi George grew up in Minnesota, but she spent many spring breaks in Arizona visiting her family, splashing and swimming in her grandmother’s retirement community pool. While shopping for swimsuits for one trip, she realized there was a problem. Swimsuits that provided adequate coverage in some areas were too big in others. She had to tie the sides of her swimsuits just to get them to fit properly.

After discovering a similar issue with other clothing and among other women, George realized the issue wasn’t with her body. It was women’s sizing itself. Sizing standards are built around one specific body shape that less than 10% of the population has. 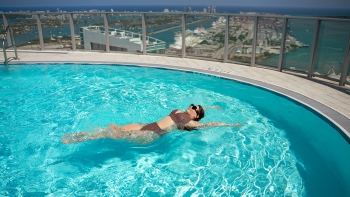 Tired of being limited by industry-standard swimsuits, George decided to develop a new sizing model. When she enrolled at Arizona State University in 2015, she took advantage of the university’s numerous entrepreneurship resources to help her launch her own swimwear brand, which was featured at New York Fashion Week and on a Times Square Billboard in 2022.

HeartGlass is the first brand to commercially produce a one-piece swimsuit with different top and bottom sizes. This innovation allows women of varying shapes to have swimwear that better fits their bodies.

George pursued a bachelor’s degree in broadcast journalism from the Walter Cronkite School of Journalism and Mass Communication and a certificate in entrepreneurship and innovation from the W. P. Carey School of Business. Her coursework at ASU enabled and encouraged her to be an entrepreneur while attending school.

She always had a lot of entrepreneurial ideas in mind, but inspiration for HeartGlass struck while she was studying by the pool and swimming with her family. She was reminded of her continuing frustration with swimsuits not fitting correctly.

“My intuition was saying, ‘I need to do this. I need to make swimwear for all body shapes,’” George said.

“A fellow classmate suggested Venture Devils to me. At the time I did have a couple of other startups that I was working on prototypes for,” George said.

George decided to apply to Venture Devils with her top two business ideas. Her swimwear line — HeartGlass — was the one that was accepted.

Venture Devils connected George with her mentor, entrepreneur and business consultant Lynn Whitman, with whom she still meets regularly. George worked with Whitman to create an execution strategy and plan for her new way to develop women's sizing.

“Lynn has truly helped guide me into adulthood,” George said. “She gives me truthfully honest and clear feedback, straight to the point.”

She says the best advice she has received from Whitman is to “take a step back and ask yourself what you need to do now to achieve your goals later.”

George spent that first year with Venture Devils developing HeartGlass in the 1951@SkySong collaborative space, where ASU-affiliated ventures can work on their ideas.

During spring break 2018, she divided her time between splashing in the pool and preparing her application pitch for Demo Day, an event where entrepreneurs in Venture Devils can pitch their ideas and earn funding. 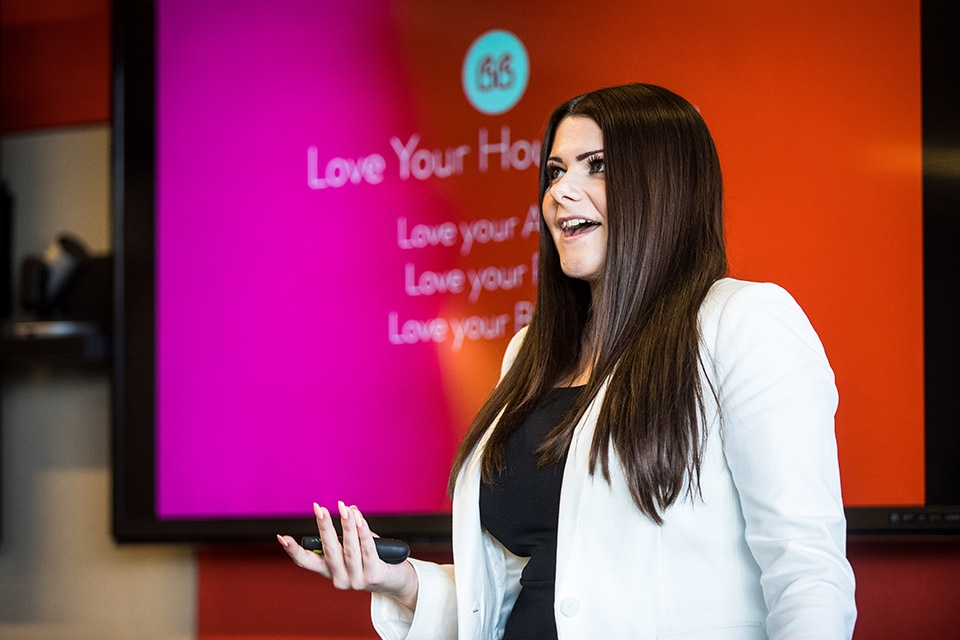 At the Demo Day event, George was happy to see familiar faces of her classmates pitching their own ideas, and she made a lot of valuable connections through the experience.

“Later on in the awards ceremony, they were making their way up to the highest amount. I didn't expect a lot, but then they had named all the winners for the lower tiers. They're naming the second-highest one, and they said me,” George said. “I get in tears thinking about it. I will never forget how I felt that day.”

George received $8,500, which gave her the start she needed to begin her company.

She pitched at Demo Day again in fall 2018. She won $5,000 and was a semifinalist in the Adidas Global Sport Alliance’s Global Sport Venture Challenge, winning $1,000.

MORE: Show your support for local entrepreneurs and see what a pitch competition is all about. Register to attend Demo Day on April 29.

School was not usually something George looked forward to growing up, but working on a degree and business she was passionate about changed everything. Still, balancing all of her responsibilities and goals was not easy.

“When I was in school, working and trying to get this product out there, I adapted a healthy routine and made sure people around me were supportive. Sometimes it was saying no to social events and having that self-discipline without being too hard on myself,” George said.

Being a part of Venture Devils provided the right funding opportunities for George, but it also gave her the chance to make connections with other entrepreneurs who were going through the same challenges.

“I also decided to take the risk and drive out to LA in January 2019. I didn't tell anyone, but I planned to go meet different manufacturers and development facilities,” she said.

In Los Angeles, she went to networking events and made valuable connections to help get her products out. She met models, celebrity photographers, celebrity music producers, other swimwear brands and inspirational speakers.

“I really had a blast finding myself out there and growing as a person. I was loving myself and what I was doing. This is something that I can say I do. It’s my purpose,” George said.

After graduating from ASU in May 2019, George dedicated her time to bootstrapping her company and working on development. She networked with other professionals and businesses in the Minneapolis area. Then the following spring, the COVID-19 pandemic arrived.

“I had not had enough materials in time to make enough swimwear. I had to wait,” George ssaid.

COVID-19 has had an enormous impact on the financial well-being of small business and entrepreneurs. The pandemic prevented George from fundraising, and a lot of funding opportunities for women were stripped away. Despite losing valuable time because of fabric mills shutting down, she kept pushing her brand out and worked to produce swimwear samples when she could.

In spring 2021, George was able to begin marketing her product in person. She applied for, and was accepted into, Fashion Week Minnesota.

She also participated in Miami Swim Week, an opportunity that not only got her connected with more people in the industry, but also garnered more HeartGlass sales.

“It was like a domino effect. I actually had the Mrs. Colombia 2022 contestant, Gladys Marín Santa, become my first international sale,” George said. “Another woman I connected with was International Ms. United 2021, Monique Coney. We met at the airport since she was flying to a convention, and she asked if I had any swimwear on me. She tried on swimsuits in the airport restroom and decided to purchase one. It was crazy!”

The two women, along with 10 other models, modeled for George at HeartGlass’s New York Fashion Week appearance. During Fashion Week, she was able to display an advertisement in Times Square.

“Everybody wanted to help out and be part of it. They just believed in the brand and what I am doing. I became a lot of the models’ favorite swimwear designer, which was such an honor,” George said.

Since November 2021, HeartGlass has had client fittings at Flirt Boutique in Edina, Minnesota, a small, female-owned business located just 15 minutes from the Mall of America. The pandemic hit small businesses hard, but by bringing more clients in with exciting collaborations, George hopes to help local retailers and spotlight female-owned businesses.

George created her business innovations and branding company, Demi Glass, which provides consulting to other businesses, in October 2018. Through Demi Glass, she has helped people restart their swimwear lines and assisted other businesses in the beauty tech, wellness and e-commerce boutique industries.

“It is great to be recognized for the help that I’ve brought in the community, especially after the pandemic where most businesses had to reevaluate their operations or move online,” George said.

For HeartGlass, George is working to get into more retail spaces and launch her two-piece swimwear line.

“Venture Devils has given me a great boost to get into the real life of being an entrepreneur,” George said. “It isn’t easy. If it was, everyone would be doing it. I never felt like I was missing out in college because I would work by the pool, listen to throwbacks and talk about HeartGlass with my friends. That kind of community support made my business fun.”

GET INVOLVED: Do you have an idea you want to turn into a reality? Apply to Venture Devils by May 15.