How do impulsive personality traits confer risk for addiction?

Jack Waddell, a psychology doctoral student in the clinical training program at Arizona State University, recently received a National Institute of Health grant examining the subjective experiences of simultaneously using alcohol and cannabis. He hopes to better understand how co-using these substances are related to negative outcomes, such as drinking and driving, and blacking out, throughout adu...

How do impulsive personality traits confer risk for addiction?

Jack Waddell, a psychology doctoral student in the clinical training program at Arizona State University, recently received a National Institute of Health grant examining the subjective experiences of simultaneously using alcohol and cannabis. He hopes to better understand how co-using these substances are related to negative outcomes, such as drinking and driving, and blacking out, throughout adulthood.

Waddell previously collected the data for this research thanks to seed funding provided by the Sharon Manne Award. He conducts research with both Professor William Corbin and Regents Professor Laurie Chassin, and he was a Research Training in Primary Prevention (T32) scholar over the past year. Waddell was also previously announced as the winner of both a Research Society on Alcoholism Memorial Award and an Enoch Gordis Award for his work on alcohol misuse. 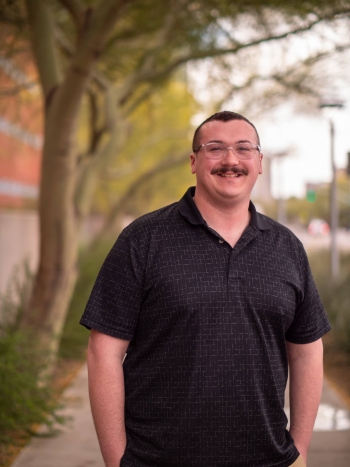 Jack Waddell, a psychology doctoral student in the clinical training program, recently received a National Institute of Health grant examining the subjective experiences of simultaneously using alcohol and cannabis. He hopes to better understand how co-using these substances are related to negative outcomes, such as drinking and driving, and blacking out, throughout adulthood. Photo by Robert Ewing Download Full Image

“My research interests thus far have focused on the addiction spectrum, both alcohol and cannabis, and really thinking about the variety of different risk factors for that and how they kind of work together,” Waddell said.

The main question that Waddell hopes to investigate further is the subjective experience of simultaneously using alcohol and cannabis, and how it compares to using just one of the substances. Waddell aims to use the data to look at the “subjective response,” or the affective states of the participants, and group them into quadrants of subjective experiences, such as high arousal positive states (e.g. feeling excited, sociable) or low arousal negative states (e.g. feeling dizzy, woozy).

“So many things are impressive about Jack’s work, but (to name a few), he has created an innovative, independent, rigorous and programmatic line of research on the co-use of alcohol and cannabis, using multiple methods and guided by both theory and intervention implications. This NIH award is well-deserved recognition and will allow Jack to continue his important contributions,” Chassin and Corbin said in a joint statement.

Related: Where and with whom you drink matters

“Whenever people are using both together, they're having this kind of enhanced euphoria and this enhanced positive experience, which is fun in the moment, but we know also leads to a lot of negative outcomes at the day level,” Waddell said.

“What we see is that those positive effects are related to more craving for substances or more continued use. What we're anticipating to see is that people are going to feel these enhanced rewarding effects, and then they're going to continue drinking or continue using cannabis — and then we know that heavier use is related to a variety of negative consequences.”

In addition to addiction-related consequences such as alcohol-induced blackouts, these negative consequences include things like conflict with friends or family, impaired behavior and driving under the influence.

According to the National Center for Drug Abuse Statistics, over 95,000 Americans die from the effects of alcohol each year, and 6.7% of adults will develop some form of Alcohol Use Disorder. Additionally, over 2 million 12- to 17-year-olds reported using drugs in the last month, and 83% of those report using marijuana.

What Waddell specifically hopes to investigate is the role that impulsivity plays in addiction. The model he is basing his research on is the “Acquired Preparedness Model," which says that people who are high in impulsivity gain different experiences from their drinking environment than users who are low in impulsivity. The model suggests that impulsivity influences outcome expectancies in analyzing risk, and has been used in alcohol/cannabis use and other risk-taking behavior. Subjects selectively attend to reward cues at a higher level than other information, and this encourages higher risk-taking behavior.

“Someone who is going into a drinking episode with higher levels of impulsivity is likely going to be more on this pathway of starting to drink, feeling really positive, and then potentially continuing to drink, whereas someone who is less impulsive may or may not have that same kind of experience from drinking,” Waddell said.

Research on factors like impulsivity can inform future personality-centered interventions that can potentially have a huge effect on mitigating addictive behaviors in the future, and could curb future use from people who are negatively predisposed to addiction.

Additionally, what Waddell hopes to uncover is when people choose to use specific substances, what are their subjective states? Are they feeling happy and sociable, or is the substance being used as a coping mechanism?

“The hope is that we can really start to elucidate what are these subjective effects that are enhanced by co-use and how can we start to target those different prevention efforts for both acute and long-term negative consequences?” Waddell said.