Interactive, Instagram-worthy, anything but boring — these are words to describe the art installations that Arizona State University industrial design seniors Meng Jye Lin and Abbie Cheng are working on as part of the Cox Student Design Contest.

Fellow design students and friends, Cheng and Lin have been taking classes together in ASU's Herberger Institute for Design and the Arts for four years now and jumped at the chance to team up on this unique student opportunity with the Cox Connected Environments Collaboratory. Their final designs will be installed in the collaboratory space to tell the history of ASU and the Cox Collaboratory and how they’re working together to create human-centered smart solutions for the community. 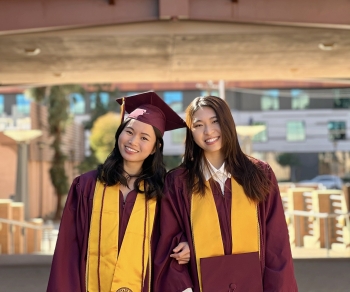 We connected with them to hear about the progress of the design project, and what it has been like to work together and with the collaboratory on creating this community-focused design.

Following direction while making it their own

The goal of the design project is to showcase the use of smart technology that is being used to improve how we learn, work and live at ASU and beyond.

With that in mind, Cheng and Lin individually brainstormed ideas before collaborating with each other and presenting their ideas to Cox. Light bulbs that showcase innovation and puzzle pieces symbolizing Cox and ASU coming together to create something greater were concepts they wanted to explore in their design sketches.

Knowing that Cox wanted to incorporate a timeline into the design also gave them direction to follow while making it their own by suggesting interactive, three-dimensional design elements and iconography that will engage visitors to the collaboratory and bring the project to life.

Another consideration for their design was that they wanted to create something that was Instagrammable — that visitors can pose with and want to share on social media.

“During this process, I’ve learned more about the marketing aspect of design because our partner (Cox) wanted the design to be more interactive and engaging with the people that are coming into the collaboratory,” Cheng said.

Creating this “photo booth”-style design in which visitors want to pose and post their photos makes that possible.

The student designers presented four sketches to the Cox Collaboratory team to get feedback and gain better understanding of their needs and wants. They’ve also spent time at the collaboratory, gathering measurements and envisioning their design in the space and how they want visitors to interact with it.

“Abbie and Meng are very talented, smart and excellent to collaborate with,” said Lauren Douglas, Cox2M’s UI/UX lead based in Atlanta. “It’s been a pleasure working with them and having their perspective on how the visitors’ experiences are enhanced through this design project.”

Prior to this project, Cheng and Lin have been collaborating mostly with their classmates and professors, so it was insightful to gain perspective from the Cox team, especially Douglas.

“It’s really interesting because we have to follow specific guidelines (for the partner), but outside of those guidelines, how can we be creative,” Lin said. “We want people to know this is a welcoming space.”

And the fact that these designs will be printed and displayed on ASU’s SkySong campus makes the project all the more exciting for the students.

When asked about how their classroom experience prepared them for this design project, both industrial design students felt ready for the challenge. From making 3D models to giving them brand and color, they’re very familiar with using design principles to bring their projects to life.

They also compared their meetings with Cox to those with their professors, in which they prepare their ideas, take notes on their feedback, revise it and present their updated designs again. Through this process, Lin shared that she has appreciated the different points of view that the Cox team has shared and how she has valued receiving that feedback and incorporating that into the design.

Cheng and Lin are finalizing their designs with the Cox team now before they are printed and displayed in the collaboratory. The Cox team has also enjoyed collaborating with more students at the university.

“We’re grateful to the Herberger Institute and Professor and head of industrial design faculty Dosun Shin for connecting us with Abbie and Meng to create these larger-than-life design concepts,” said Angela Saurini, who has been working with the students on the project. “Their beautiful designs are sure to engage, educate and inspire all who visit the collaboratory.”

From a clean room to deep space

Editor's note: On June 24, 2022, NASA announced that the Psyche mission will not make its planned 2022 launch attempt due to the need for more time to ensure that the spacecraft’s flight software and testing equipment will function properly in flight.PASADENA, Calif. – It’s just before 9:30 a.m. when you arrive at NASA’s Jet Propulsion Laboratory.You’re here to see the Psyche spacecr... 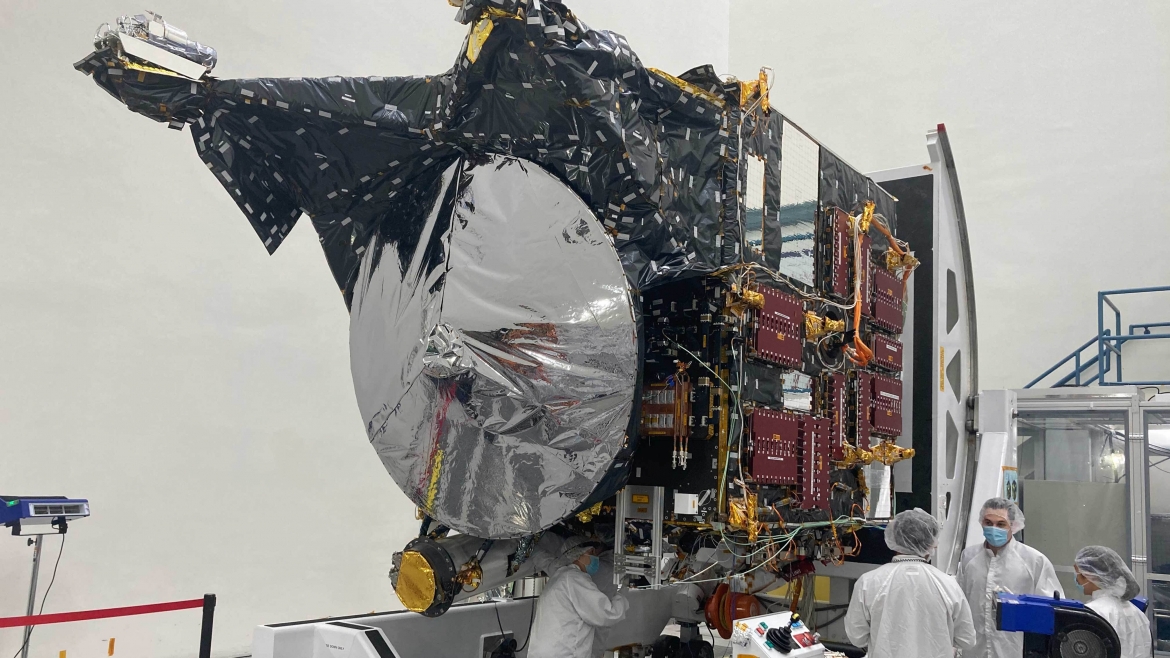 From a clean room to deep space

Editor's note: On June 24, 2022, NASA announced that the Psyche mission will not make its planned 2022 launch attempt due to the need for more time to ensure that the spacecraft’s flight software and testing equipment will function properly in flight.

You’re here to see the Psyche spacecraft, which is in its final stages of testing before being flown to NASA’s Kennedy Space Center.

You sign in, receive your media badge and are handed a printout titled “Clean Room Rules/Logistics.” The rules are designed to make sure not a single loose strand of clothing or dust particle somehow finds its way onto the spacecraft’s inner workings and instruments.

You can’t bring a notebook or writing utensil into the clean room. You can’t wear makeup or any frayed clothing. Most of your skin must be covered, and you cannot wear jewelry with sharp edges.

After a few minutes, you and the other media members pile into a white van and are driven to the entrance to the clean room, where Psyche is located.

But you’re not in yet.

In an outside room, you’re told to place your feet, one at a time, into a brushing machine that cleans the bottom of your shoes. Your cellphone or camera is wiped down. You’re given a smock, booties, a mask, hairnet and gloves to wear.

Finally, properly fitted and vetted, you walk through the air lock and into the clean room. There it is: Psyche.

And standing nearby, a smile evident even under her mask, is Lindy Elkins-Tanton, the principal investigator for the Psyche mission, Regents Professor in Arizona State University’s School of Earth and Space Exploration and vice president of ASU’s Interplanetary Initiative.

Elkins-Tanton is smiling because the day is almost here. In late April, the Psyche spacecraft — which will be approximately the size of a singles tennis court after its huge solar panels unfold in space — will be flown to Kennedy Space Center in Florida, where it will undergo final preparations for its scheduled launch in August and 3 1/2-year journey to the asteroid Psyche.

“It does feel surreal to me,” Elkins-Tanton said. “But I’m trying really hard not to count my chickens. I was giving a talk to a bunch of high schoolers a couple of years ago, and one of them said to me, ‘What if it blows up on the launch pad?’ First of all, I was like, ‘How can you say those words?’ He goes, ‘Do you get a do-over?’ And I’m like, ‘No, we don’t get a do-over.’

“It’s such a high-risk endeavor, so I try to really just enjoy every day and not count on exactly what’s coming next. So, it’s hard for me to be over the moon. Yes, we’re about to launch, but there’s still a lot of days between now and then.”

Still, Elkins-Tanton said, the impending flight of Psyche is “an important milestone to celebrate.”

She has been working on the mission for 11 years. There have been stops and starts and questions and answers, and although there is still much that can go wrong — it’s the nature of a space mission — Elkins-Tanton and her team are at the point where they can feel confident about the launch and mission. They completed their final hardware and instrument testing last Saturday, and the remaining software testing and mission operational tests will be performed at testbeds at JPL and on the flight vehicle between now and launch. Another view of the Psyche spacecraft in the JPL clean room. The mission team completed final hardware and instrument testing last Saturday, and the remaining software testing will be done before the late-April departure to Florida. Photo by Scott Bordow/ASU News

Bone is asked about the clean room rules, and why it’s vital to avoid even a single dust particle. If a particle settles on the spacecraft’s cameras, called the Psyche Imagers — principal investigator of that instrument team is Jim Bell of ASU’s School of Earth and Space Exploration — it could potentially cloud or obscure the images they take of the asteroid.

“We have to protect those images,” he said. “Now that the cameras are installed, any particle that finds its way onto the lenses we may not actually see until we take that first picture in flight, and then there’s nothing we can do about it.”

Once Psyche arrives in Florida, its solar panels will be installed. The days will be counted down until the launch period opens on Aug. 1.

Then, after liftoff, the long wait begins.

The spacecraft’s cameras will be able to see the asteroid — which is the shape of a potato and about the size of the state of Massachusetts — as a point of light during the entire cruise phase; starting near the end of 2025, it will start slowly getting larger to the onboard cameras, Bell said.

Henry Stone, Psyche’s project manager at JPL, said once the asteroid is close enough that it can easily be seen by the cameras, the mission operations team will adjust the trajectory of the spacecraft and bring it into orbit.

Psyche will not land on the asteroid; but as it orbits, its objective is to determine, among other things, whether the asteroid is leftover core material of an early planetesimal (a building block of planet formation) or simply unmelted material.

“If it is a core, which is the leading hypothesis, that’s going to be just tremendous in pinning down which models best explain how the solar system was formed,” Stone said.

“We’re going to have 3 1/2 years in space, and then we’re going to have almost two years at the asteroid,” Elkins-Tanton said. “But it’s those key milestones where you say to everyone, ‘Great job. Look what we’ve done.’ And I feel like this is one of them.”

About the NASA Psyche mission

ASU leads the Psyche mission as the home of the mission's principal investigator, Lindy Elkins-Tanton. NASA's Jet Propulsion Laboratory, a division of Caltech, is responsible for the mission's overall management, system engineering, integration and testing, and mission operations. Maxar Technologies delivered the solar electric propulsion chassis, the main body of the spacecraft and most of its engineering hardware systems. NASA's Launch Services Program at Kennedy Space Center manages launch operations.

For more information about NASA's Psyche mission, go to www.nasa.gov/psyche and psyche.asu.edu/

Top photo: The Psyche spacecraft is shown in its clean room at NASA’s Jet Propulsion Laboratory in Pasadena, California, on Monday, April 11. Members of the media were invited to get a last close-up look at the spacecraft before it is flown to Florida for final launch preparations. The launch period opens Aug. 1. Photo by Scott Bordow/ASU News