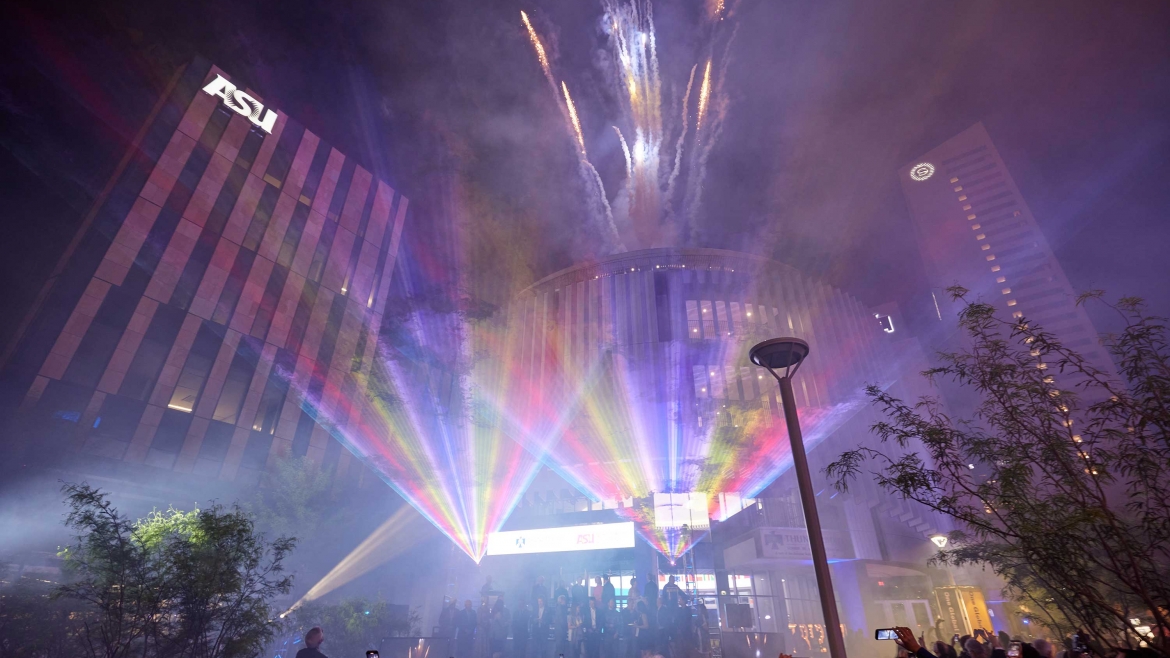 With klieg lights, fireworks, food trucks and live music on streets closed to traffic, the event was as much a festival as a grand opening for the building in downtown Phoenix.

The building is named after Phoenix philanthropists Francis and Dionne Najafi, who recently bequeathed an historic $25 million donation to the school, with the goal of educating 100 million worldwide learners by 2030.

Alumni from across the globe on Friday enjoyed food and drink and watched flamenco performances before the program kicked off with Thunderbird’s time-honored tradition of the international parade of flags, 58 in all, each representing a current student’s home country. The grand opening topped off a week of festivities that included master classes on a range of topics from cryptocurrencies to space leadership; a golf tournament; and regional celebrations of food, music, dancing and more. 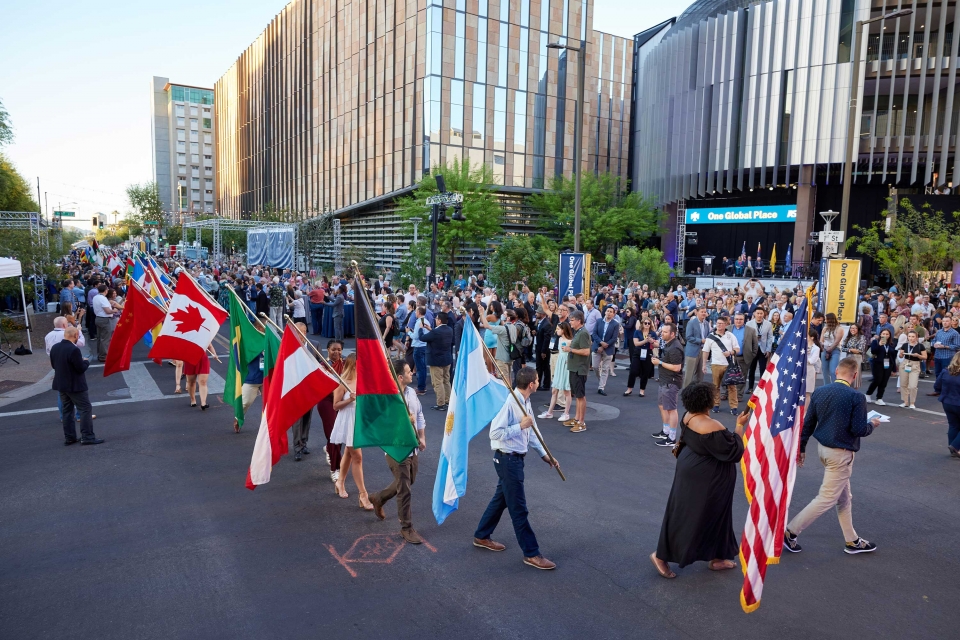 Nearly 60 flags from around the world — each representing a current student’s home country — were part of the parade of flags at Thunderbird's grand opening ceremony Friday in downtown Phoenix. Photo by Brandon Sullivan

It was the school’s 75th anniversary, and it also marked four years since it joined ASU. Opening the state-of-the-art $67 million building at First and Polk streets downtown less than three years after breaking ground was the third accomplishment.

Khagram quoted Amelia Earhart: “The most difficult thing is the decision to act; the rest is just tenacity.”

“The future is incredibly bright,” he said. “Let’s look ahead to the next 75 years.” Moore Ruble Yudell and Jones Studio, the architects of the new global headquarters for Thunderbird, have labeled the structure the "most technologically advanced building of any leadership, management or business school in the world.” Students can learn a new language in its immersive virtual reality language lab, visualize and interpret data using artificial intelligence, and connect with the greater global community using the latest in immersive and virtual communications found throughout the building.

Thunderbird will be a key partner in introducing Phoenix to the world, said Phoenix Mayor Kate Gallego. The city invested $13.5 million in the new headquarters.

“This is a transformational day for the city of Phoenix,” Gallego said. “The mythical thunderbird is rising.” 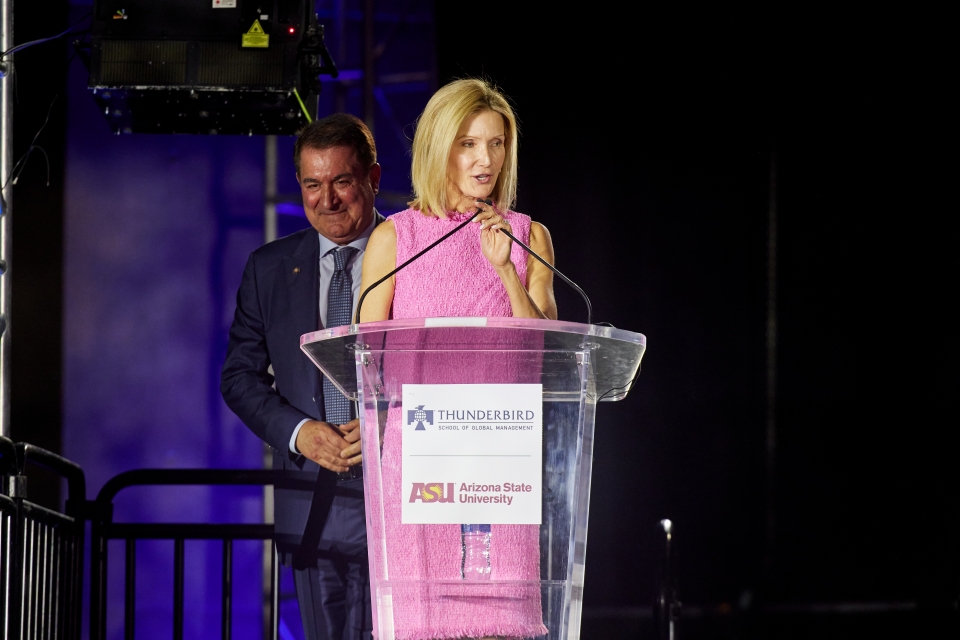 Phoenix philanthropists Dionne (front) and Francis Najafi recently bequeathed an historic $25 million donation to the school, with the goal of educating 100 million worldwide learners by 2030. The new Thunderbird building is named in their honor. Photo by Brandon Sullivan

Thunderbird was founded in 1946 by an Army colonel who felt that the United States was "notoriously short of personnel trained for foreign trade."

ASU President Michael Crow cited those origins and how they relate to the world in 2022.

“Thunderbird emerged to be a place where leaders might come together from around the world to figure out how they might interact with each other and build our species forward without conflict, without fighting, without death and the acquisition of land or the movement into a country just because you think you can do it,” Crow said.

The school was born of a global conflict that ended with the use of nuclear weapons, he said.

Thunderbird stands for free trade, rule of law and democracy, he said. 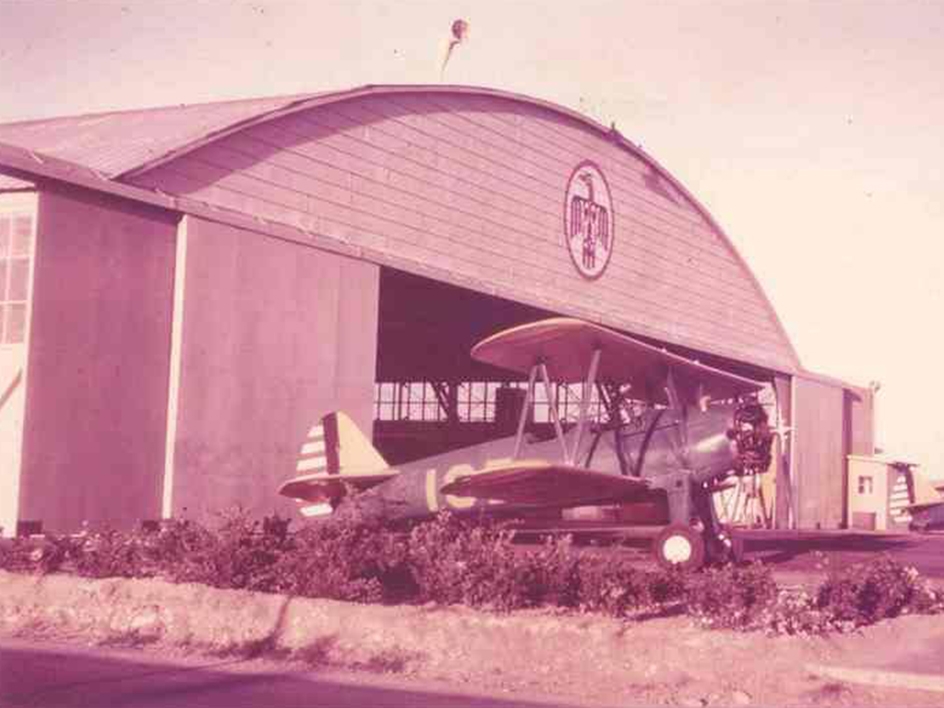 A hangar at Thunderbird Field No. 1 in Glendale, Arizona, on the site of what would become the original Thunderbird School. 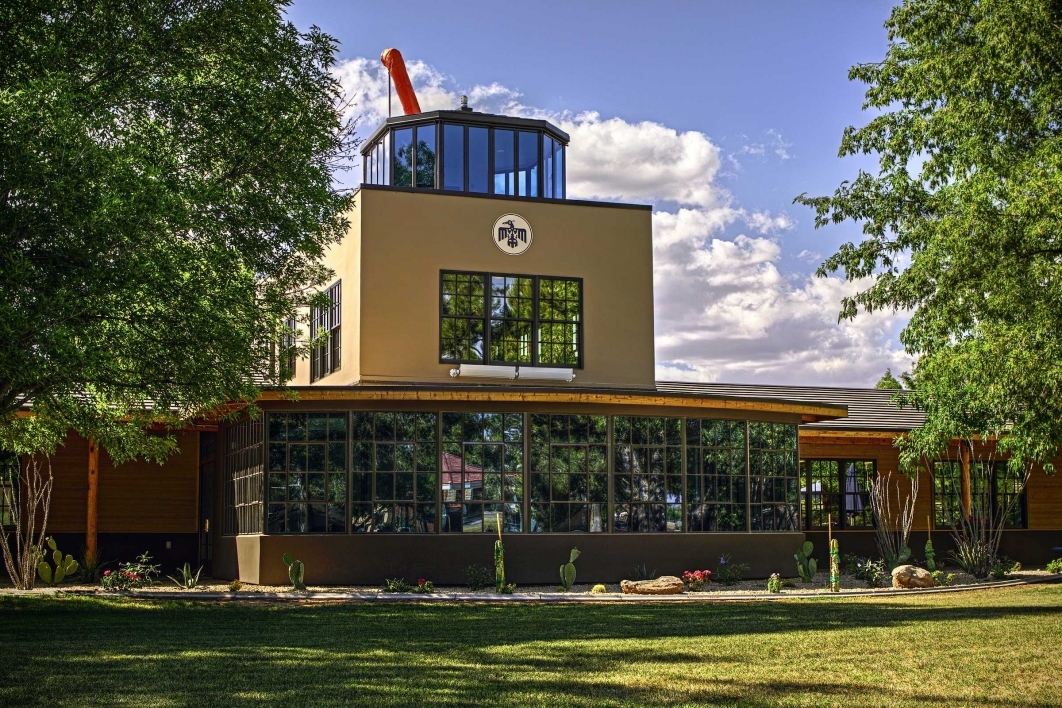 The Thunderbird School in Glendale in 2015. 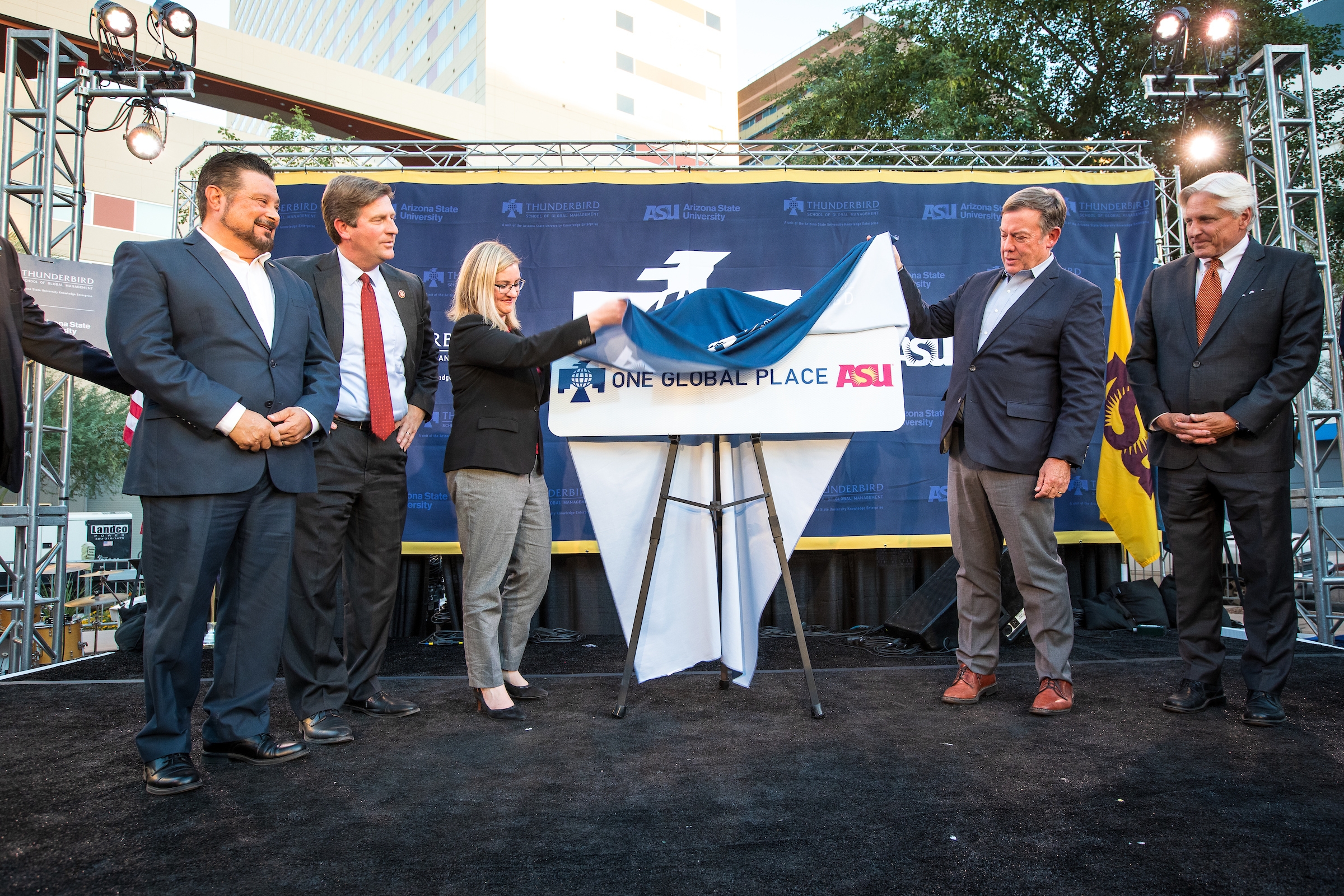 The first-floor rotunda at the new downtown Phoenix home of the Thunderbird School of Global Management includes digital displays and a digital globe, representing alumni and students from around the world. 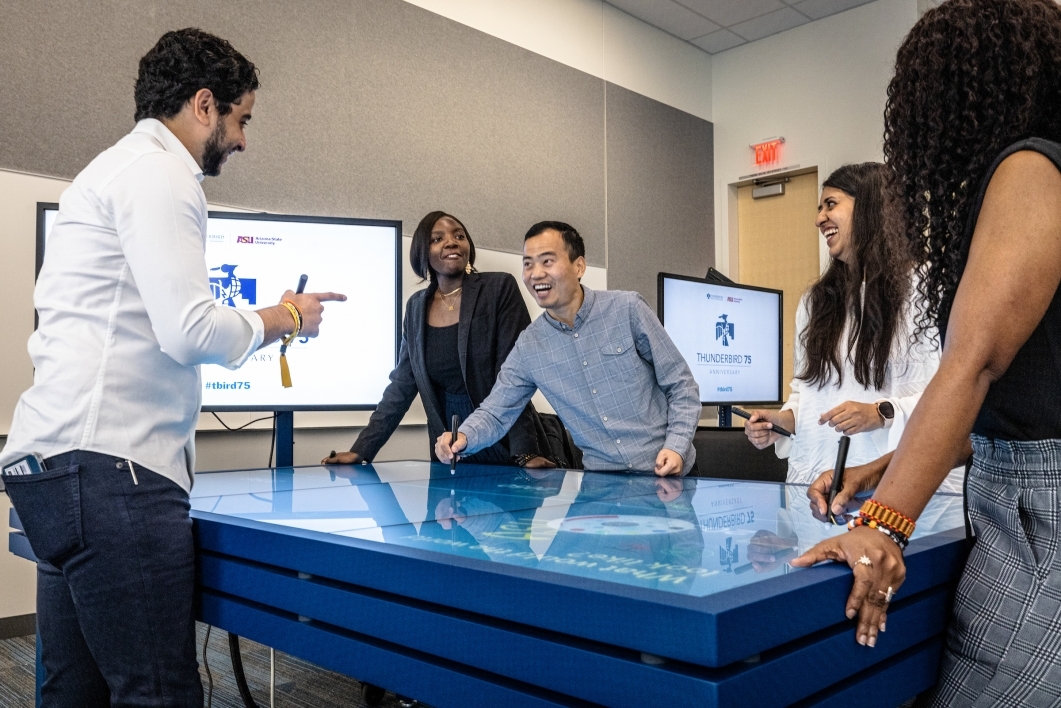 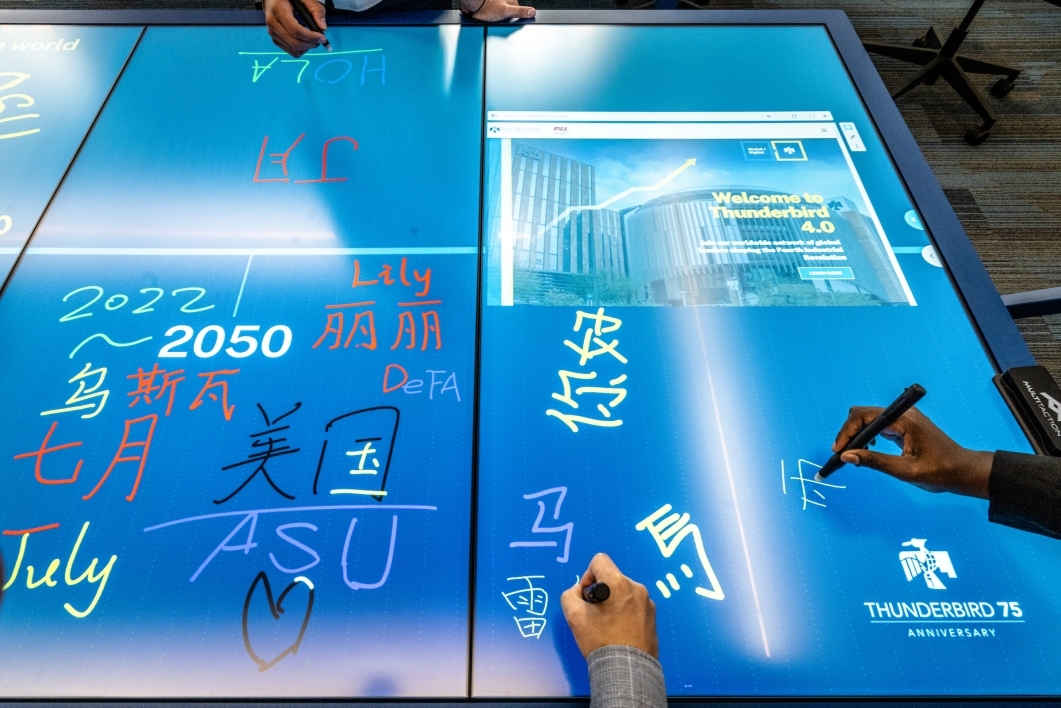 A closeup of the touch table, where Masters of Global Management students Defa He of China (left) and Danae Bell, of the U.S. write in Chinese. 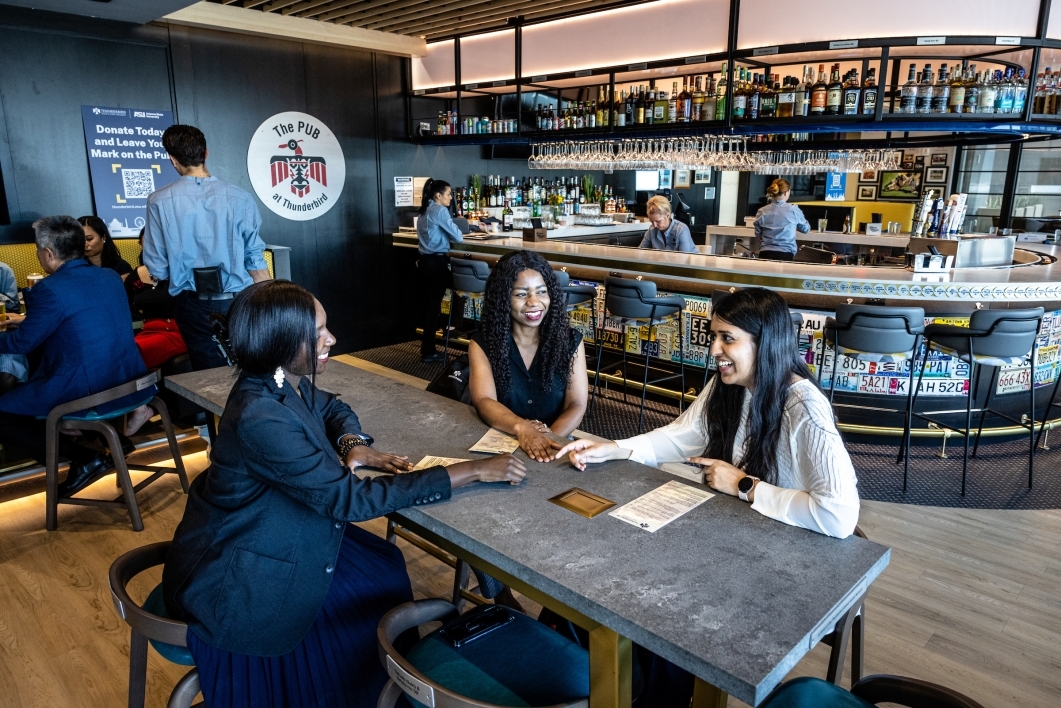 Clockwise from left: Master of Global Management students Danae Bell, Lilian Taruvinga and Uswa Ahmed share some downtime in the Thunderbird Pub. The new pub pays homage to the original pub on the Glendale campus, which was a popular spot for Thunderbird students and alumni to gather. 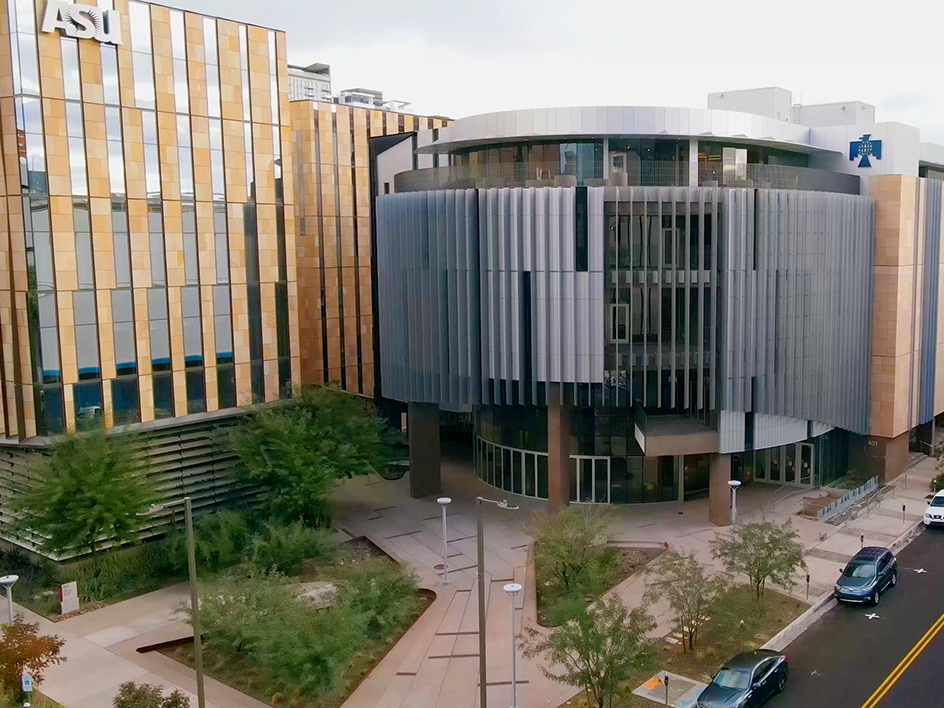 The new headquarters for the Thunderbird School of Global Management in downtown Phoenix. 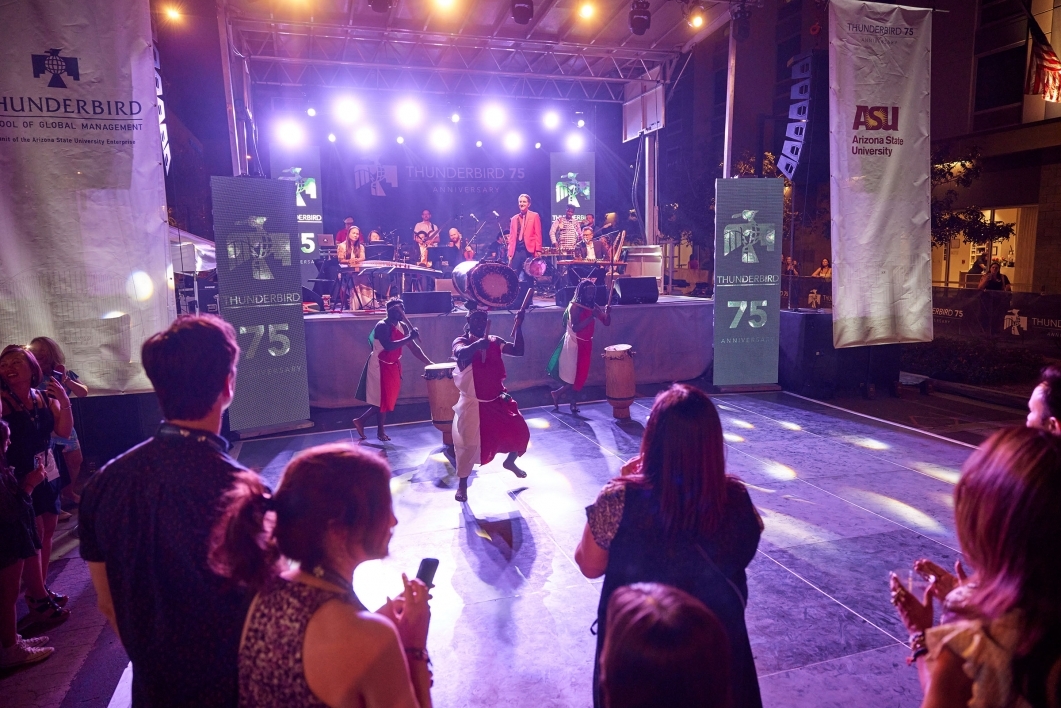 ASU Softball sweeps the Oregon schools for the 2022 season on a rainy Sunday in Eugene. ...

ASU Softball sweeps the Oregon schools for the 2022 season on a rainy Sunday in Eugene.