According to the association, the longevity in the marketplace is strong testimony to the quality of a title. To be nominated, a text must have been in print for more than 15 years. "Fitness for Life" (seventh edition) earned the honor in the K–12 category. 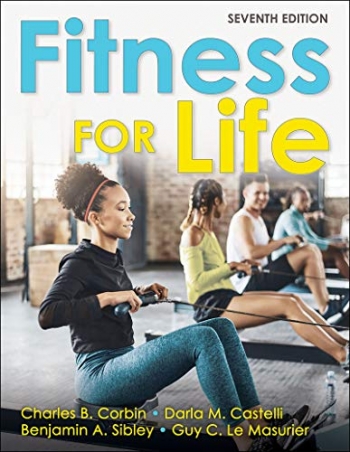 "Fitness for Life" previously earned the association's Textbook Excellence Award for current outstanding text and learning materials. The first edition of "Fitness for Life" was published in 1979 by Corbin and co-author Ruth Lindsey. Published by Human Kinetics, the text is now in its 43th year and is used in schools throughout the United States and the world.

The McGuffey Award bears the name of William Holmes McGuffey whose influential primers first appeared in 1836 and helped bring the United States out of illiteracy. McGuffey's "Eclectic Readers," usually referred to as "McGuffey's Readers," were in print until 1921.

The 2022 judges indicated that "Fitness for Life" has resulted in “a sustained movement within physical education toward lifelong activity with the goal of achieving and maintaining physical, mental and emotional health, and wellness." The judges also acknowledged research that shows the “long-term effectiveness of the program.”

When the pandemic hit in March 2020, hospitals and clinical facilities across the Valley had to close their doors to nursing students. The break gave leaders at Arizona State University's Edson College of Nursing and Health Innovation time and the opportunity to rethink the student nursing experience.Prior to the pandemic, students would rotate between numerous facilities in the Valley, including... 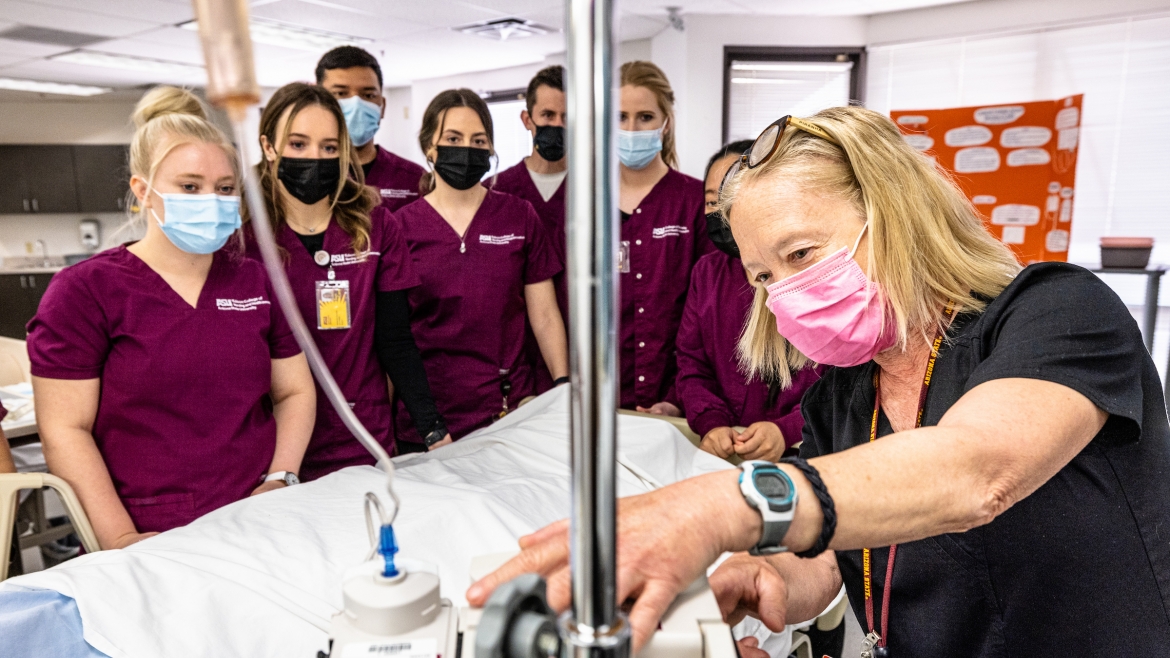 ASU students work in one clinic rather than rotating between clinics

When the pandemic hit in March 2020, hospitals and clinical facilities across the Valley had to close their doors to nursing students. The break gave leaders at Arizona State University's Edson College of Nursing and Health Innovation time and the opportunity to rethink the student nursing experience.

Prior to the pandemic, students would rotate between numerous facilities in the Valley, including Banner Health, Abrazo Health, OASIS Hospital and HonorHealth. It was a wide-ranging education, but the constant movement between facilities didn’t allow students to become embedded in the culture of a medical practice and truly get to know the doctors and nurses they were working with.

ASU officials, including Edson College Dean Judith Karshmer, asked their clinical partners how they might change the process in order to better educate students and make them more attractive job candidates after graduation.

Those conversations led to the “team model" approach, which may be unique among nursing schools in the country, said Salina Bednarek, a clinical assistant professor in Edson College.

“We have a consultant we work with who told us everybody is talking about it, but nobody is quite doing it,” Bednarek said.

Here’s how the team model works: Teams of eight students — there are nine teams in total — work in a single facility throughout the school year rather than jump from one facility to another. They rotate between practices in that facility, say, from endoscopy one week to pre-operative care the next.

Students have input as to what type of facility they would like to work in, based on their interests, geography, populations they want to serve, etc. They do not select a specific facility, though.

“In clinical agencies, nurses are tired. Nurses are overworked. Nurses are usually seeing a large volume of students, and it’s a revolving door. They invest a lot of energy into training students, but they never get to see the students develop. They have fleeting moments with them," Bednarek said. "This model allows nurses to see those students develop and see those students grow. Professionals invest in them because they know they’re probably going to be working alongside them soon.”

“Operationally, I would say it’s working,” Gilman said. “We’re used to having the nursing students rotate in and rotate out. It’s actually nice to have them there every week. It creates a continuity, which creates a better buy-in for the students and our nurses.

“Continuity is everything to a new learner, especially when they’re learning scary new content. I think seeing them (the student nurses) from when they’ve started and seeing them now, the looks on their faces is much less deer in the headlights.”

That comfort level is just one of the benefits of the team model approach.

“The (previous) experience wasn’t as rich as it could be because they weren’t really delving into it as in depth as they could,” Bednarek said. “With this model, we’re taking away the unknown and we’re creating some consistency for student learning so they can grow and develop as opposed to being in a new unit and wondering where the glucometer is, where the bathroom is, how the culture of the unit works. They’re actually focusing more on growing as a nurse.”

Nursing student Alyssa Millard works at St. Joseph’s with her team. Although she rotates between units at St. Joseph’s, Millard said the ability to develop deeper relationships with the professional nurses and doctors at the hospital has opened up conversations regarding medical care she might not have had when moving from facility to facility. 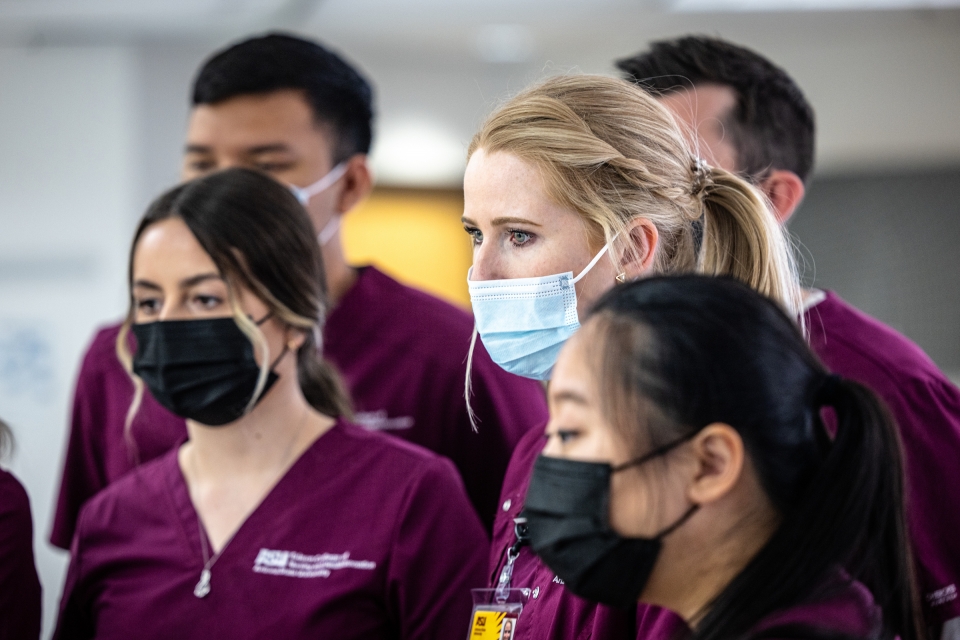 Edson College of Nursing and Health Innovation student Alyssa Millard (center) and other nursing students, including Kelsey Brownlee (left) and Grace Kim (right) listen as their instructor goes over an infusion pump at the Mercado building in downtown Phoenix. Photo by Charlie Leight/ASU News

“I’m starting to see some familiar faces and getting used to them,” she said. “It’s different doctors every week, but it’s becoming more comfortable to ask them questions and feel like you’re not putting anyone out by asking a question.”

That comfort level has another benefit: Doctors can better evaluate their students’ professional behavior, which only helps ASU grads when their job applications go out.

“For physicians and staff, they get to know the students very well,” said Alexis Warren, education specialist at St. Joseph's. “They get very comfortable. There’s this really well-oiled relationship. And it just all ultimately creates a better, safer environment for our patients.”

Millard said, “They get to know you, and they get to see your work ethic — whether you’re just going to sit on the sidelines the whole day or you’re going to jump in and be like, ‘Hey, can I do this?’”

In essence, Gilman said the team model is an internship opportunity.

Another benefit of the team model is the value students receive by being part of an eight-person team.

“Building community among the eight students is one of the byproducts of these groups,” Bednarek said. “They travel together, they stay together the entire time and that builds a community where they trust each other and learn from each other.”

ASU student Parker Shumway said the students on his team are in constant communication about what they’ve learned, the next unit on the rotation list and what the doctors and nurses are like. That kind of shared experience was much harder to achieve when students were moving from one facility to another.

“We’re really able to get the inside scoop of what we’re getting ourselves into,” he said. “That’s huge because instead of getting thrown into all these scenarios kind of by ourselves, we’re able to experience it together. We’re really getting kind of a deeper dive into nursing.”

Top photo: Edson College of Nursing and Health Innovation Instructor Dawn Bedwell goes over an infusion pump with a group of nursing students at the Mercado building in downtown Phoenix on March 18. The cohort is part of the accelerated post-baccalaureate group "Arizona Periop" that will spend its clinical time at St. Joseph’s Hospital and Medical Center caring for patients before and after surgery. Photo by Charlie Leight/ASU News