Native communities at the heart of 'Boardz and Arrowz' exhibit

Now through March 31, ArtSpace West, located on Arizona State University’s West campus, is hosting "Boardz and Arrowz," an exhibit featuring nearly 50 hand-painted and mixed-medium skateboard decks by Native artists from around the country.The exhibit is curated by ASU Assistant Professor Jacob Meders from the School of Humanities, Arts and Cultural Studies in the New College of Interdisciplinar... 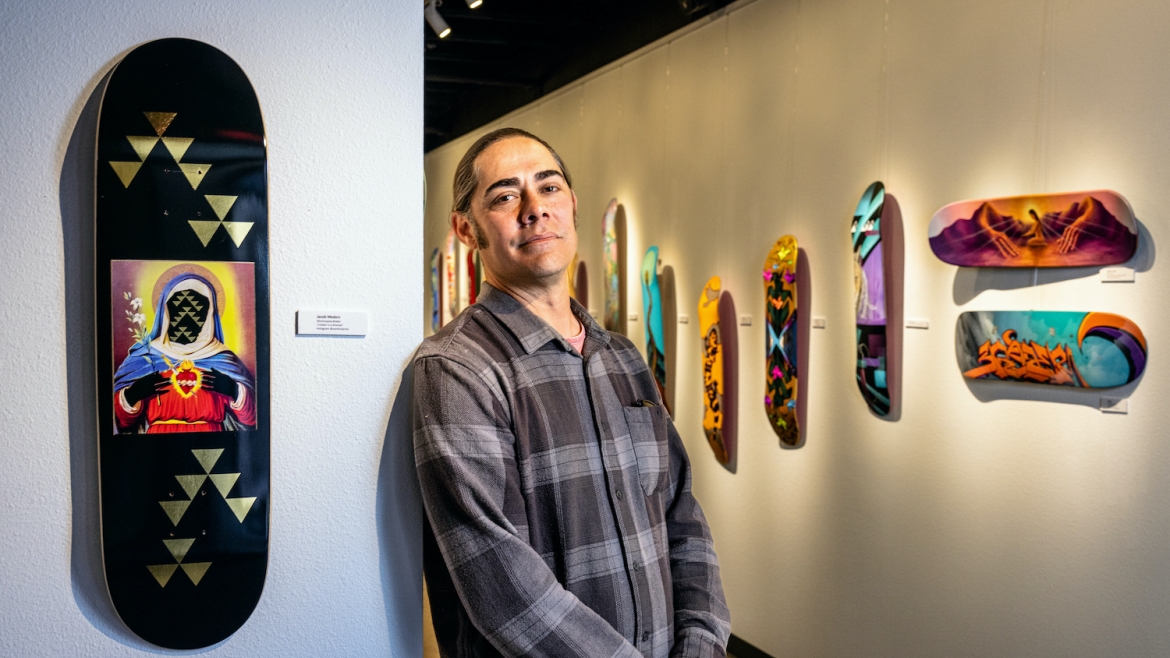 Native communities at the heart of 'Boardz and Arrowz' exhibit

Now through March 31, ArtSpace West, located on Arizona State University’s West campus, is hosting "Boardz and Arrowz," an exhibit featuring nearly 50 hand-painted and mixed-medium skateboard decks by Native artists from around the country.

The exhibit is curated by ASU Assistant Professor Jacob Meders from the School of Humanities, Arts and Cultural Studies in the New College of Interdisciplinary Arts and Sciences.

Meders, who is an avid skateboarder and globally recognized Native (Maidu, Mechoopda-Konkow) artist, said the exhibit pays homage to skateboarding culture as a grounding and connective force among Native youth and communities nationwide.

All boards will be available for auction through March 31 in partnership with Cowtown Skateboards to support the completion of the GuVo Tohono O’odham Skate Park near Sells, Arizona. Boards to bid on include works by several notable local artists, such as Lalo Cota, Jeremy Singer (Navajo) and Darell Justin (Gila River Indian Community).

For Meders, the exhibit gives fellow Native artists an outlet to create and continue the tradition of storytelling, even if the artists themselves don’t skate. Meders said community is at the heart of it all, much like his skateboard piece itself, which prominently features a version of the iconic image of the Virgin Mary carrying a sacred heart.

“You can see that there's a lot of effort put into these pieces. They're gonna put all this effort into it, and then they let go of their work to allow it just to generate something else, something for the community,” Meders said. “They're doing this out of their love for their community and love for Native youth.” 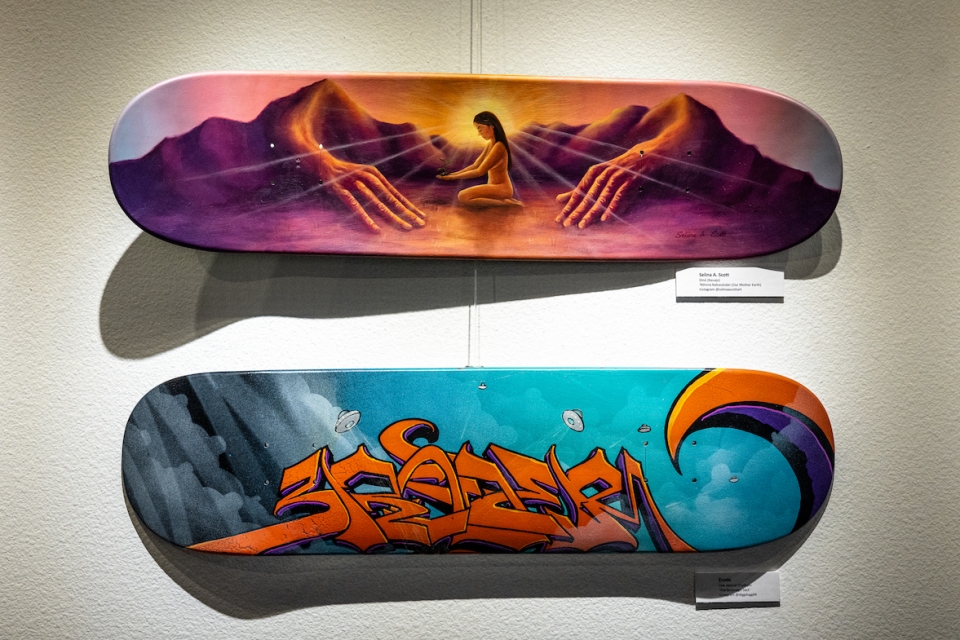 To Meders, each piece represents the resilience of Native communities who were disporoptonaly impacted during the global pandemic.

“I don't think there's anybody in here who's contributed to this who hasn't been affected in some way, and they still have that love for their community,'' he said. “It's so awesome to see so many artists not thinking of themselves. Sometimes when we're in a moment of grief, it's hard to break out of that.”

Similar to many other Native youth, art and skateboarding were a part of Meders’ life from an early age. While he humbly gives most credit to the Native arts and skating communities for coming together to create "Boardz and Arrowz," it all started with his piece, called “Creator is Woman.”

Olivia Hsu, a senior who will be graduating in May with her Bachelor of Arts in interdisciplinary arts and performance, helps curate the gallery’s monthly shows. She said in addition to supporting Native youth and skate culture, the gallery is meant to elevate female artists. In fact, the boards created by female artists were purposefully hung slightly elevated in honor of Women’s History Month.

“Women in art can be so underlooked, so we wanted to give them a place to be highlighted and seen and stand on an elevated side for once,” she said. “I think it’s amazing how women in general — but especially in Native culture — how much they’re able to endure and to always find strength no matter what circumstances they are facing.”

During the pandemic, Meders was commissioned for a gallery showcase at the Scottsdale Museum of Contemporary Art (SMoCA), but as COVID-19 wore on, the supply chain impacted artists' ability to get hold of supplies like traditional canvases. But he didn’t let the lack of supplies stop his vision. He got creative and stayed true to painting an image of the Virgin Mary holding a sacred heart — he just did it on a skateboard deck instead.

Meders opened the idea of a public gallery at the West campus to artists, and dozens of submissions from around the country flooded in. 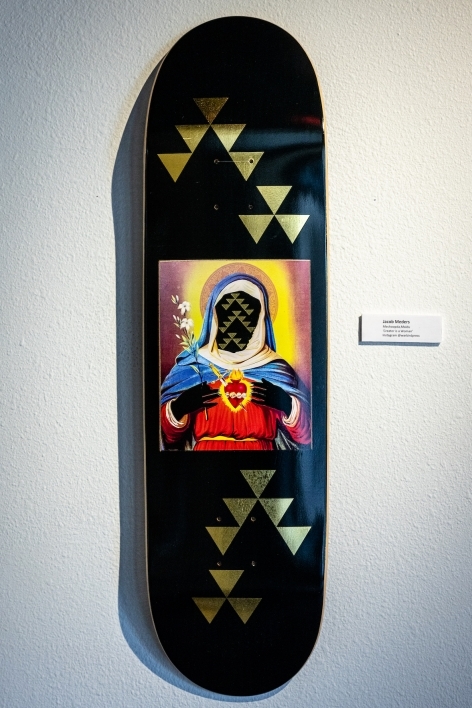 "Creator is Woman," by Jacob Meders. 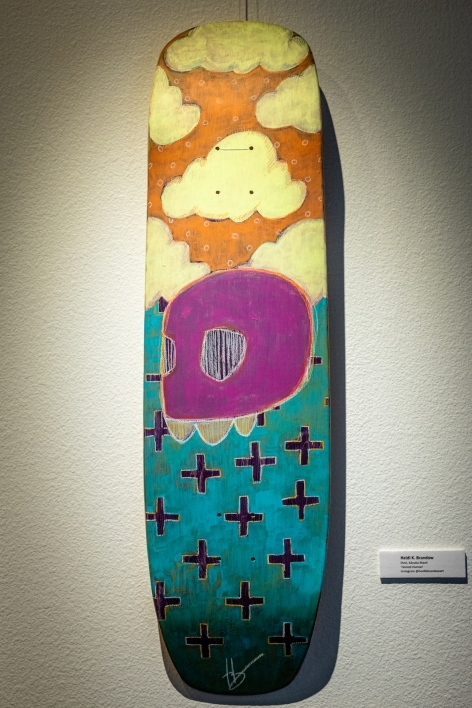 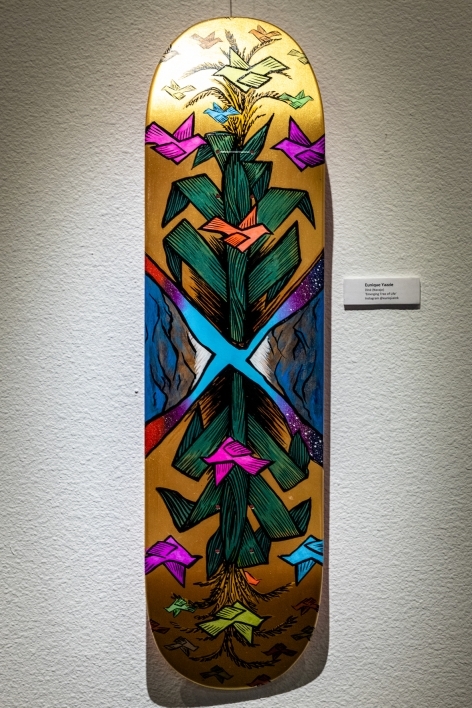 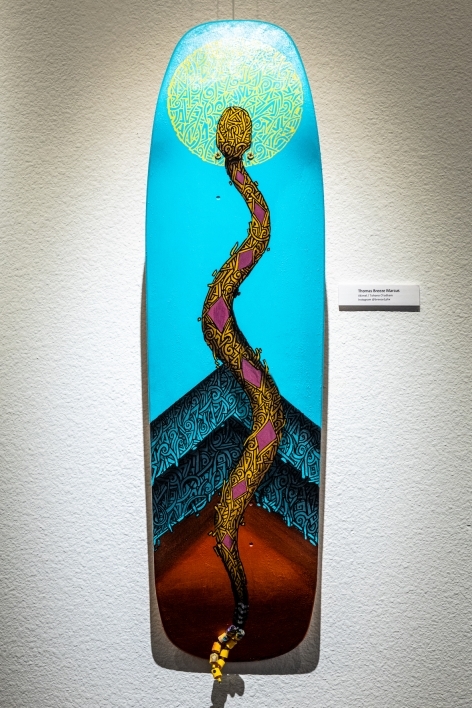 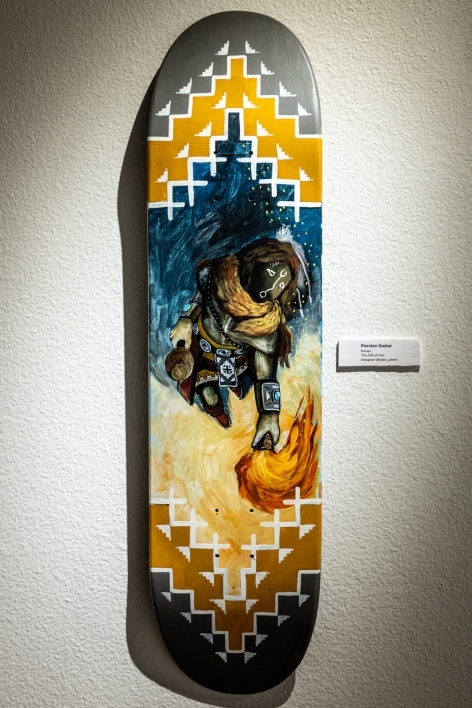 "The Gift of Fire," by Piersten Doctor (Navajo Nation). 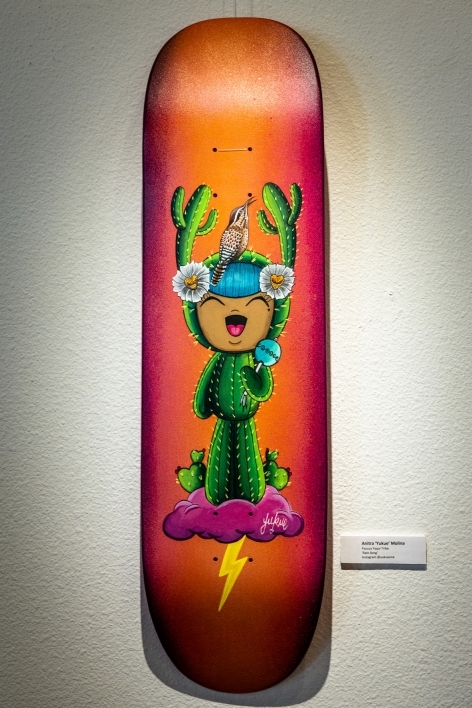 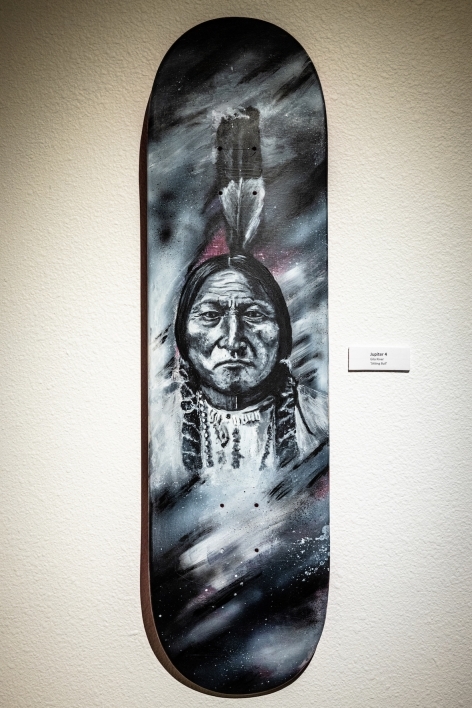 He couldn't have known then that his artistic vision would also lead to an auction supporting a skate park, but when he got in touch with his friends at Cowtown Skate and told them about "Boardz and Arrowz," he found out they were working on building a skateboarding park for GuVo Tohono O’odham youth. Cowtown had already donated a ramp and gear, but to complete the park, more funding was needed. Enter the auction.

Meders, who had recently taken a spill from skateboarding that resulted in a bruised tailbone, says that it is this resilience that is emblematic of Native artists, skaters, women and people everywhere.

“There is this association with resilience. ... It has been a norm for Indigenous people to be outcast, to be outside of the social norm. I think I relate to that because other skaters, especially when I grew up, were also such outcasts,” he said.

No matter how many times he falls, Meders always gets back up.

While the iconic image of the Virgin Mary is at the heart of his art piece, Meders’ humility is at the core of this exhibit.

“To me, it's a beautiful thing to see so many people contribute to this concept and rally around the community and help the youth with the skate park," he said. "No matter what's going on, it makes you feel really gracious and absolutely warm, loving, and it's a good feeling.”

Top photo: Jacob Meders, an assistant professor in interdisciplinary arts and performance, stands next to his skateboard piece, "Creator is Woman." Photo by Charlie Leight/ASU News