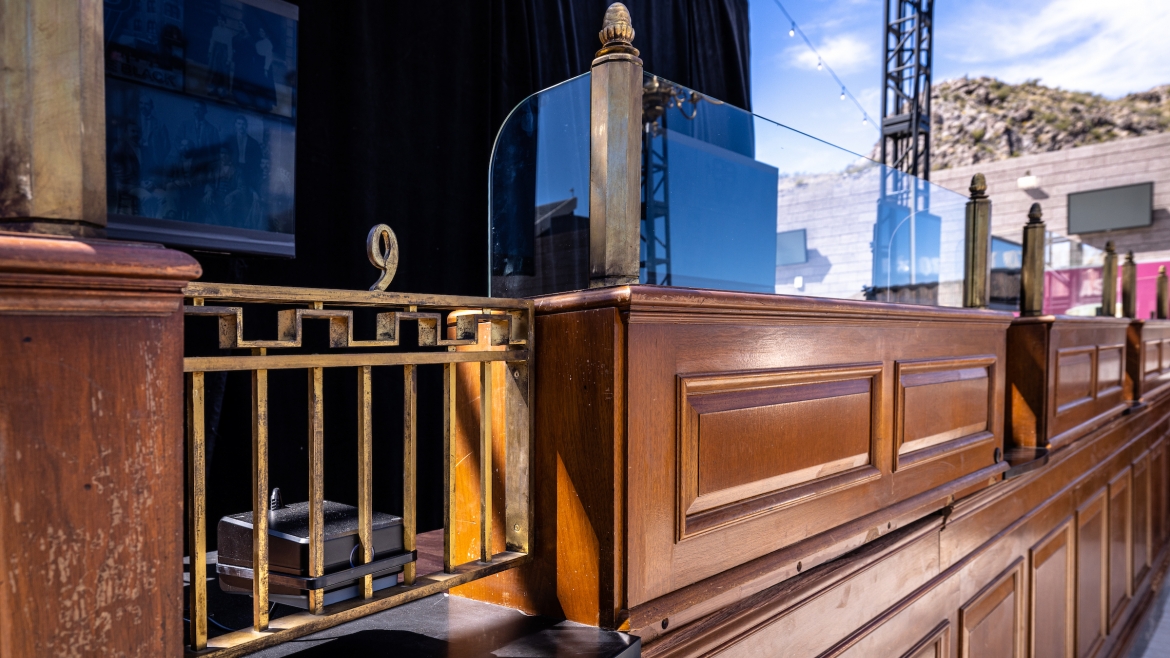 A new art exhibit at Arizona State University is focusing attention on three Black communities that flourished a century ago, and the mob violence that destroyed them.

“Banking While Black,” an interactive, multimedia experience at the Coca-Cola Sun Deck at Sun Devil Stadium, opened March 15 and runs through April 17. It’s free and open to the public.

Artist Paul Rucker wants viewers to experience both the joy and the horror of the “Three Black Wall Streets” of Tulsa, Oklahoma; Richmond, Virginia; and Durham, North Carolina.

“It’s about Black excellence and Black people thriving in these communities, and the aspect of them being destroyed, and the overall aspect of people not knowing about the thriving. And it’s the narrative of why those thriving Black communities are not there now,” Rucker said.

The installation re-creates an actual bank, with artifacts such as a teller’s window and deposit tables, which Rucker bought after an old bank was demolished in his hometown of Richmond. 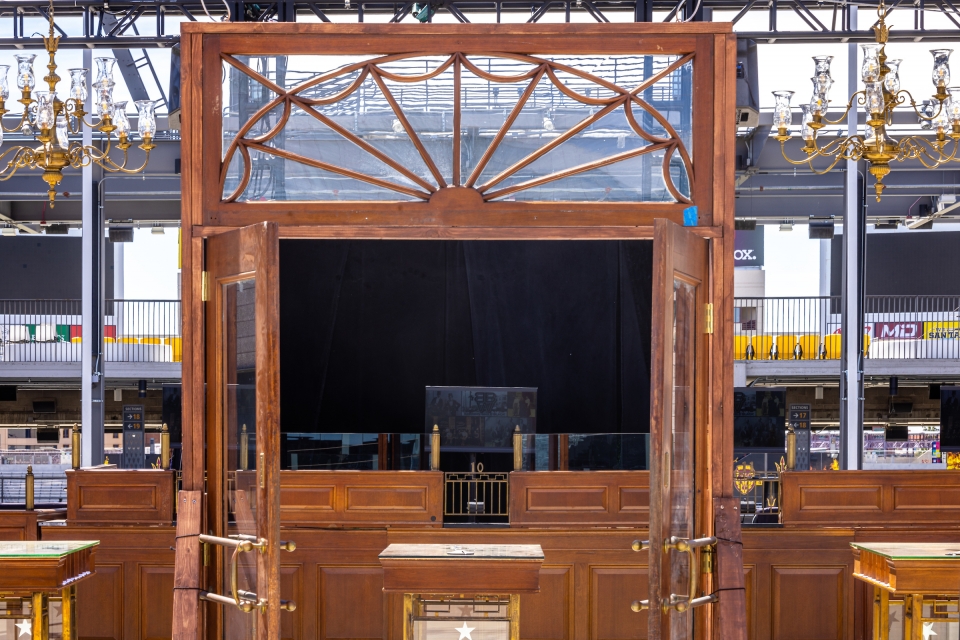 “Richmond was the capital of the Confederacy, and banking and wealth in that city is tied to enslavement,” he said.

“This bank is post-Jim Crow era, from the 1930s and ‘40s. I went to the salvage company and saw the deposit table and thought, ‘I’ll do a banking project with the deposit table.’ And they looked at me and said, ‘You know, we have the rest of the bank.’ ”

Much of Rucker’s work expresses the lingering effects of historical racism and the erasure of history. He has a collection of more than 20,000 historical artifacts, including postcards of lynchings and branding irons used to mark Black people as enslaved.

“Black people are an integral part of building this country.”

Rucker was part of the recent ASU Art Museum exhibit “Undoing Time: Art and Histories of Incarceration,” in which his installation focused on Geronimo, the Apache leader and prisoner of war. Last summer, he exhibited at the Virginia Museum of Fine Art, where his installation “Storm in the Time of Shelter” consisted of 48 mannequins dressed in Ku Klux Klan-style hoods and robes that Rucker created out of African kente cloth and other colorful patterns.

Rucker is an iCubed Arts Research Fellow and Assistant Professor at Virginia Commonwealth University in Richmond, Virginia and Curator for Creative Collaboration for VCUarts. 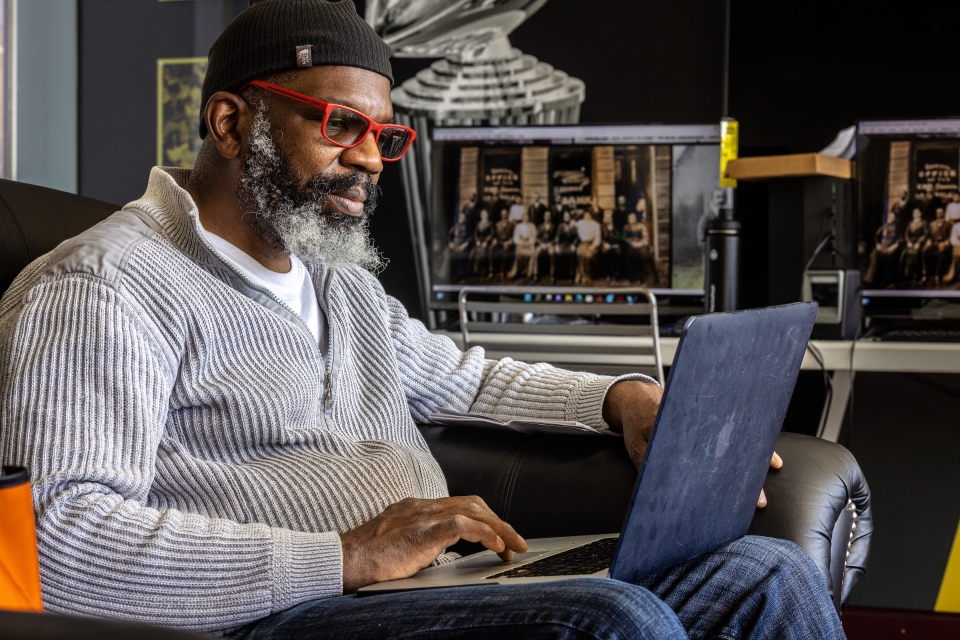 Artist Paul Rucker looks over the digital interactive components for his "Banking While Black" installation at Sun Devil Stadium on March 14. Photo by Charlie Leight/ASU News

Here, he answers some questions about his latest installation:

Question: Last year, you created an interactive website called “Three Black Wall Streets.” Was that the precursor to this project?

Answer: I wanted to do something to memorialize the 100th anniversary of the Tulsa Race Massacre (which happened on May 31, 1921), where 34 city blocks were burned and 6,000 Black people were arrested. I met with the folks at ASU over two years ago. We were talking about this project, and then COVID happened and delayed everything.

I was a visiting professor at George Washington University and we decided we needed to have some kind of presence, so we created the website. It’s about, why do we memorialize the destruction of a community versus the thriving aspect of the community before the massacre?

We are talking about why they existed and how they thrived and how beautiful it was to have these Black ecosystems with shops of every type, not just barber shops and restaurants.

Q: What do you mean by economic violence?

A: These communities existed in every part of the country, even Phoenix. And they don’t exist now because of systemic policy and inequity and access to loans and land. These Black communities in many cases were destroyed because they were competing against white businesses, and doing well.

Ida B. Wells was an anti-lynching crusader because she had three friends who opened a grocery store and it was competing against a white grocery store. So the people from the white grocery store picked them up and lynched them. There was no accountability, no trial. Black people were killed because they had successful businesses.

Q: You bought the bank fixtures used in “Banking While Black” years ago, and your TED talk addresses your collection. Why do you collect historical artifacts?

A: I’ve been into collecting photos of late. I have hundreds of photos from the mid-1800s, tintype photos.

It’s about preserving history and taking control of the narrative around a piece. People look at an item and think of a story. But I think it’s important to have accurate information about the origin of an object whose story is being told. A lot of these artifacts deal with violence and with American history. I want to preserve these artifacts to make sure they go into the hands of institutions who won’t put them into storage and never show them.

As an artist, I have the role of storyteller. Objects tell stories, and when you have documentation of incidents that happened over a hundred years ago, you can’t deny the facts. When I collect a piece, I think about “What other hands touched this item?” “What suffering took place? Who benefited and who didn’t benefit?” 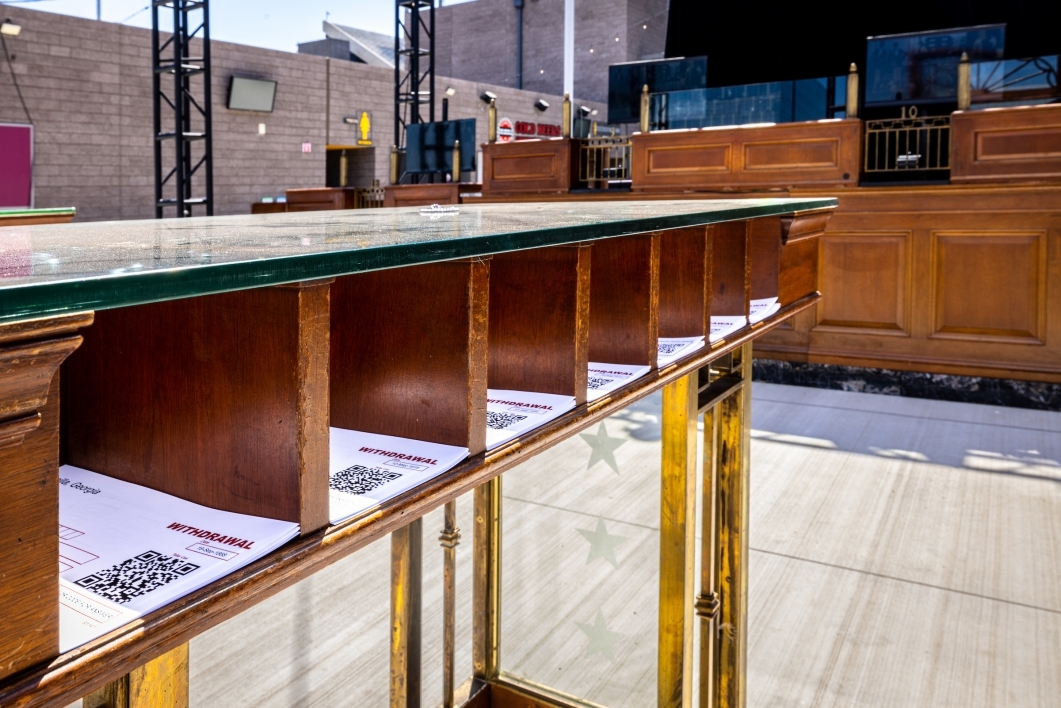 Viewers of "Banking While Black" can interact with the vintage bank by scanning deposit slips at virtual teller windows to test their knowledge and learn stories of the "Three Black Wall Streets." 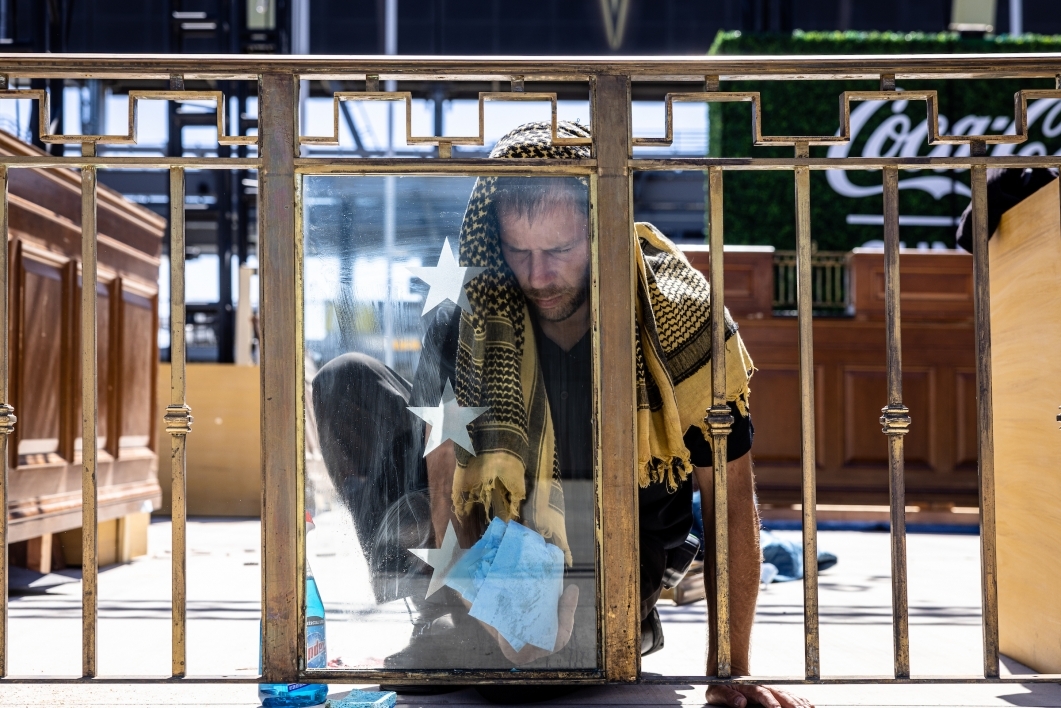 Daniel Tulk, an employee of Rhino Staging, cleans a glass pane on a brass railing in the installation "Banking While Black" at Sun Devil Stadium. The exhibit is created with actual 1930s-era bank fixtures purchased by artist Paul Rucker. 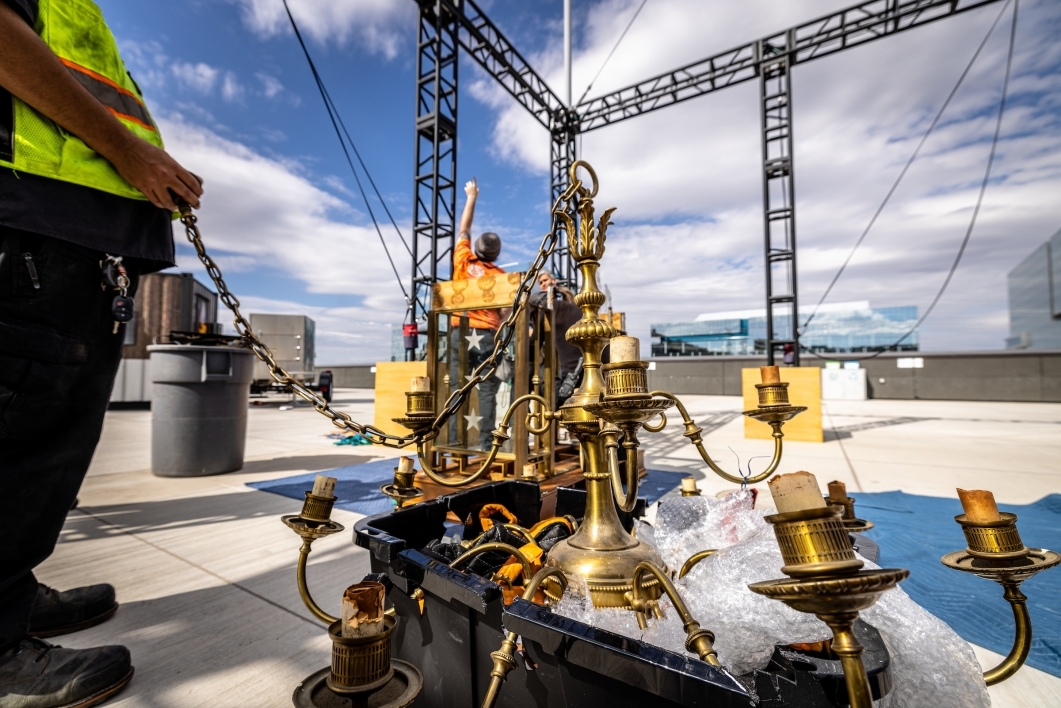 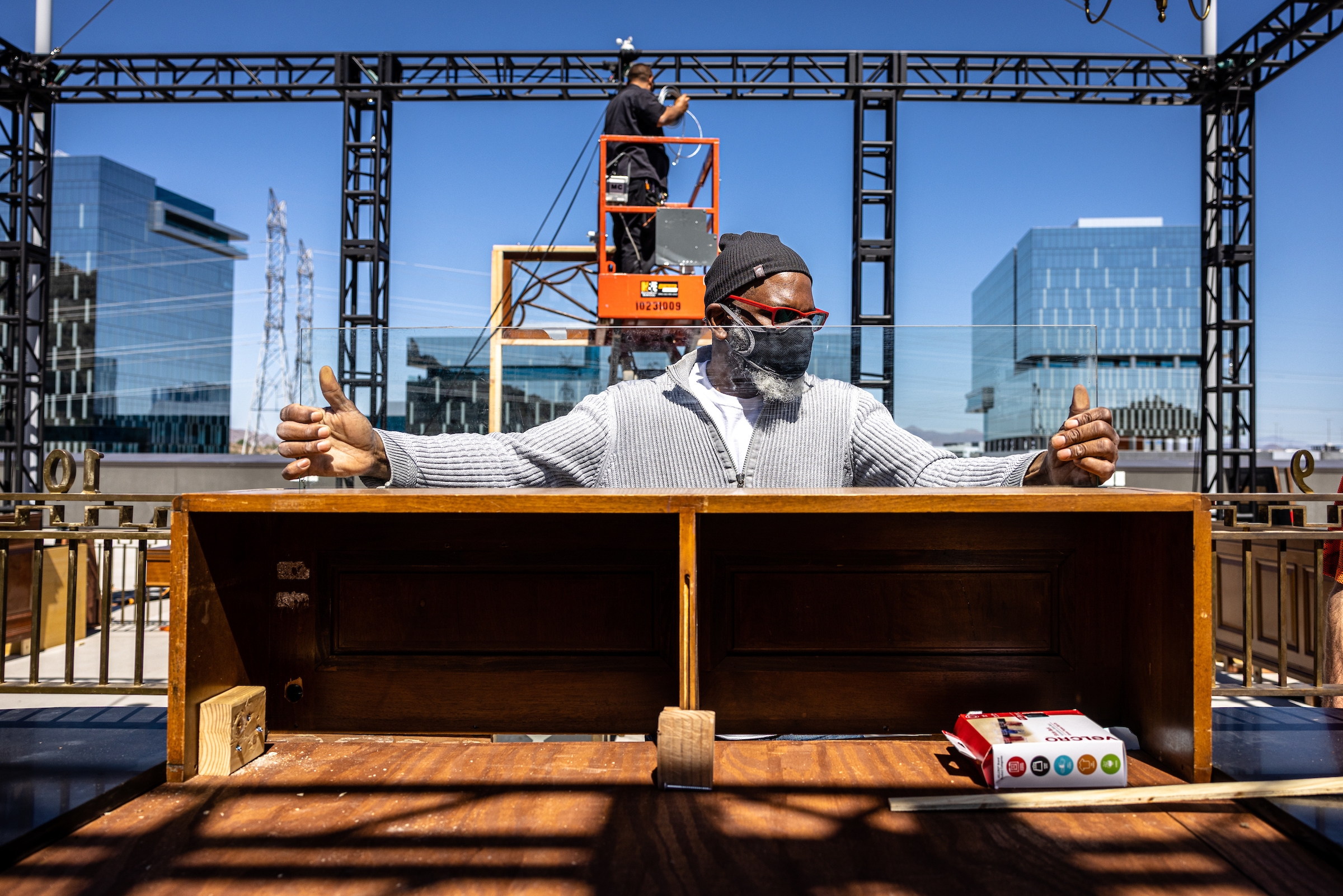 Artist Paul Rucker visualizes the placement of glass panes for his "Banking While Black" installation at Sun Devil Stadium.

I have a building I purchased that’s going to house my collection of artifacts and be used for education and addressing the false narratives.

Q: At “Banking While Black,” viewers will have an interactive experience. What will that be like?

A: People will get a “deposit slip” at the deposit table and will go to the teller booth and scan the slip and information will pop up on a screen. Some will be about the three Black Wall Streets and the positive information about those cities, and some will be about the white mob violence and the destruction of some communities. There also will be a game involved with true-and-false questions. There will be 500 pieces of unique data.

Q: “Banking While Black” will be held in a football stadium. Football is one American institution that has faced accusations of racial inequality, with teams that are majority Black and coaches, managing staff and owners who are majority white. What do you think about that location?

Football is easy because there are so many metaphors. Players can be traded, like slaves. They wear uniforms, like being branded.

I play the cello, and I played the double bass in the South Carolina Philharmonic when I was young. You couldn’t be good if you were Black or a woman — you had to be better. There was another Black player in the orchestra my first year. Then he moved away, and I thought, “Wow, I’m the only Black player in the orchestra.” And I looked out into the audience, and of the 2,500 people in the room, I was the only Black person.

“Banking While Black” is commissioned and presented by ASU’s 365 Community Union, a department within ASU Cultural Affairs. Partners include Arizona PBS, the Center for the Study of Race and Democracy, the Herberger Institute for Design and the Arts, ASU Art Museum and the W. P. Carey School of Business. Entry to the exhibit is by timed admission.

In conjunction with the exhibit, Movies on the Field, a free film series, will show the 2021 Apple TV original film “The Banker” at 7 p.m. Friday, March 18, on the Sun Devil Stadium jumbotron. Inspired by true events, “The Banker” centers on revolutionary businessmen Bernard Garrett, played by Anthony Mackie, and Joe Morris, played by Samuel L. Jackson, who devise a risky plan to take on the racist establishment of the 1960s. The event will feature a pre-show Q&A with the producer of the film, Nnamdi Asomugha.