For the vast majority of their existence as a species, humans lived in tribes of roughly 150 people. Only in recent history was the concept of the individual born and elevated as something to be valued. Columnist, blogger at The Weekly Dish and author Andrew Sullivan argues, however, that there is a return to the state of tribal existence in America today.

Sullivan was the keynote speaker at a conference hosted by Arizona State University's School of Civic and Economic Thought and Leadership, titled “Renewing America’s Civic Compact,” on Feb. 25 and 26. 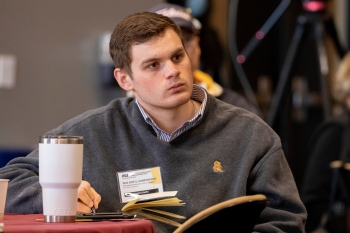 “Individualism as a goal is still essential, but when we create groups that are plainly visible by the color of your skin, by your sex, by your origin, there’s a deep double-down on the sense of group identity,” noted Sullivan in his lecture “We All Live on Campus Now.”

“The human being cannot be reduced simply to the group he identifies with. (This) can swamp our minds and destroy our sense of ourselves. The challenge is to rescue the individual from this intellectual climate,” added Sullivan, noting that “students stepping on a university campus for the first time today immediately wonder: To which group do I belong? And is this group a member of the historically oppressed or privileged class? We call this ‘intersectionality.’”

This tension between group dynamics and individualism was explored throughout the conference, which was attended by 149 guests, including undergraduate and graduate students, faculty and community members. At the end of the event, attendees got a chance to tour the school’s Civic Classics Collection, which includes rare books and first editions of "The Federalist," Martin Luther King Jr.’s "Stride Toward Freedom," George Washington’s "Farewell Address," Adam Smith’s “Wealth of Nations” and "The Gettysburg Address."

In addition to Sullivan’s analysis of college campus culture and its impact on the national consciousness, Kmele Foster, from Freethink and co-host of We The Fifth podcast, and Karen Attiah, columnist for The Washington Post, discussed the significance of individual dignity to achieve social progress. Foster's talk explored race, identity and the dignity of individuality. Other panels explored the role of meritocracy in American democracy, critiques of liberalism, how technology has contributed to the deterioration of our civic compact, and how civic friendship and education may rekindle our culture’s engagement in the democratic process.

The human being cannot be reduced simply to the group he identifies with. (This) can swamp our minds and destroy our sense of ourselves. The challenge is to rescue the individual from this intellectual climate.

— Andrew Sullivan, author, columnist and blogger at The Weekly Dish

“The 2022 SCETL conference is an annual opportunity to reflect upon the most pressing challenges to American civic life," noted Carol McNamara, associate director for public programs at SCETL. "Each year, we bring to ASU’s campus some of the country’s top public intellectuals and scholars to dialogue with our faculty, students and community. This year, we were guided by Abraham Lincoln’s words in the first inaugural address: How can Americans move together with a sense of purpose to rebuild the public and private institutions through which we sustain our civic, communal and professional lives?”

The conference was co-sponsored by the School of Civic and Economic Thought and Leadership and the Sandra Day O’Connor College of Law at ASU. It was supported by the Jack Miller Center, the Foundation Against Intolerance and Racism - FAIR and the Scaife Foundation. Conference lectures and panels are available on YouTube. 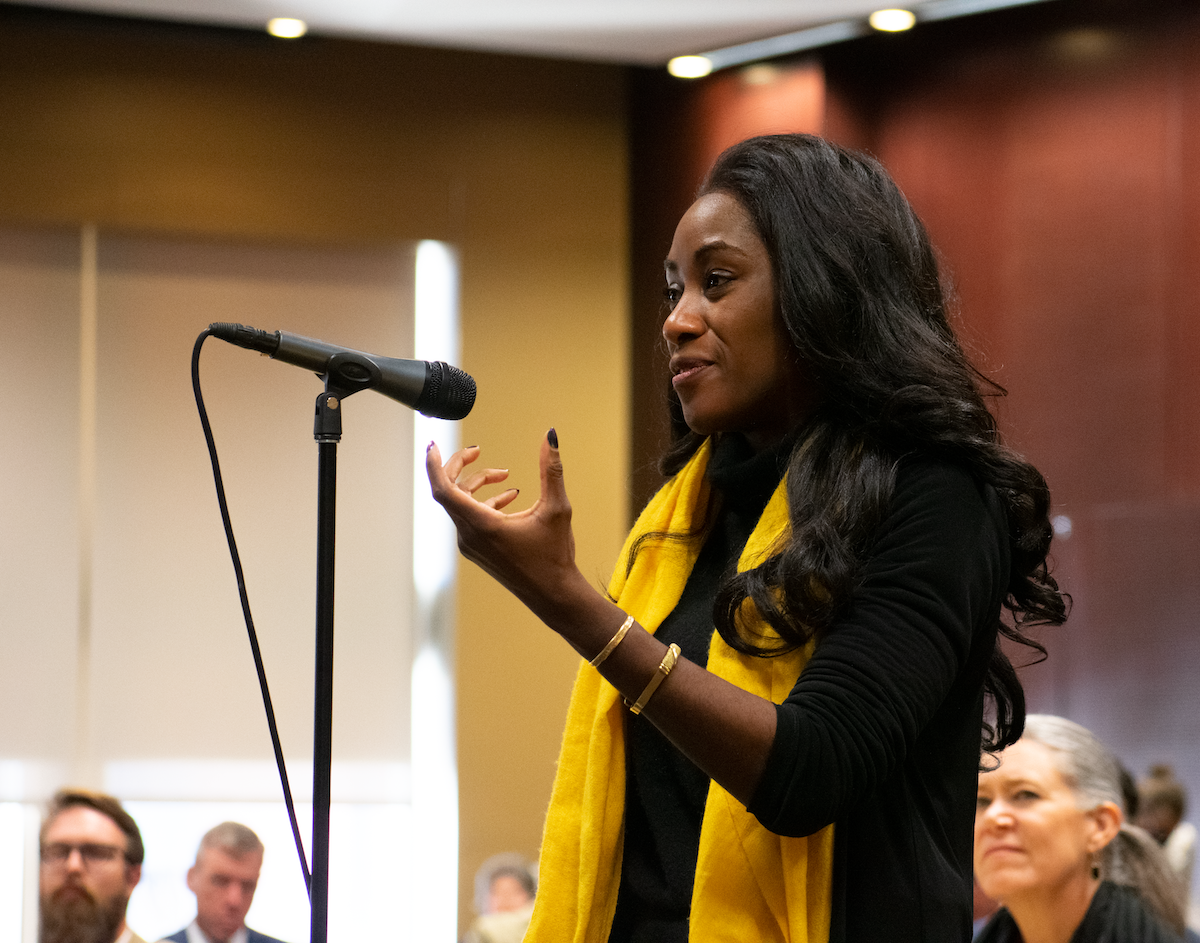 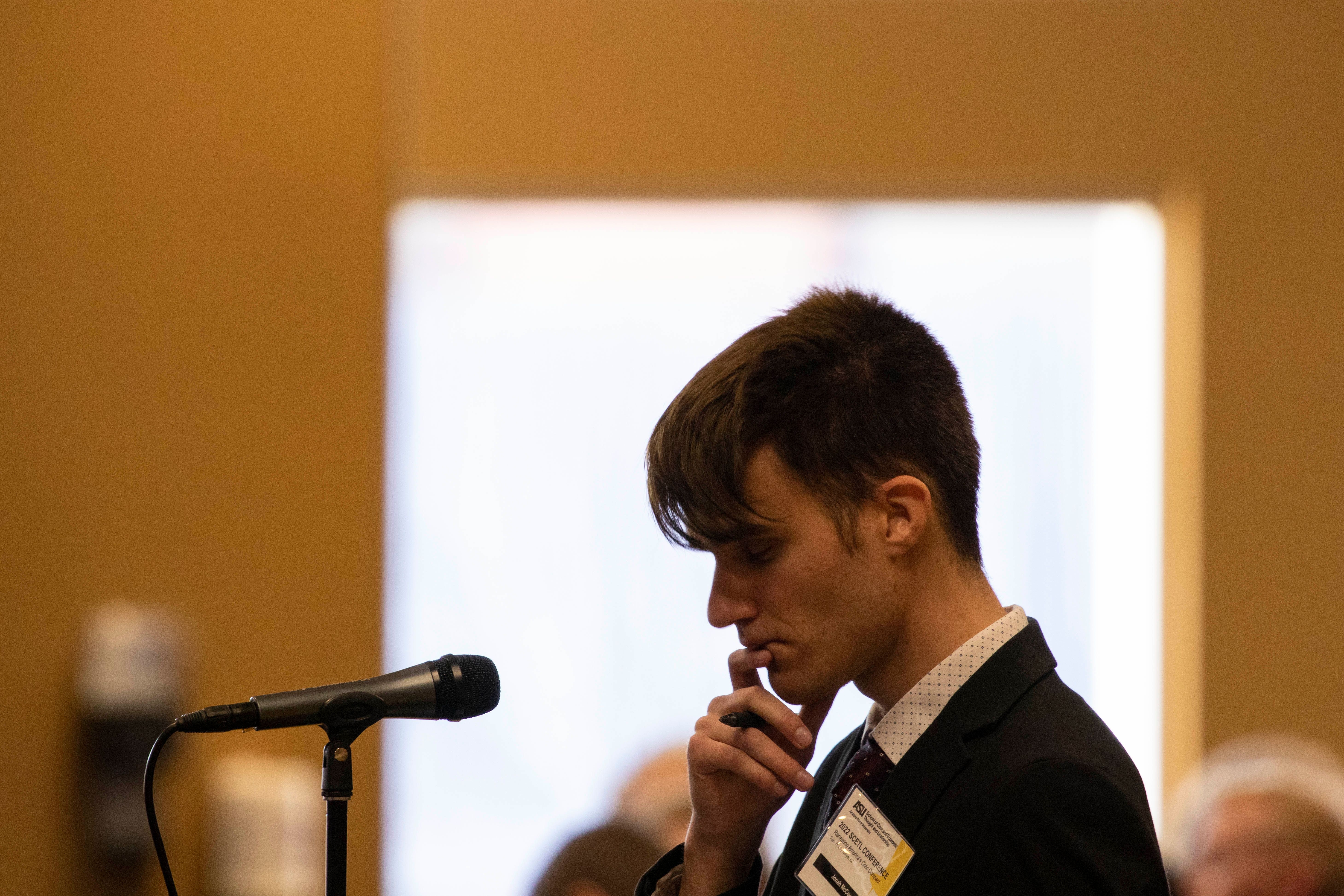 An ASU student asks a question at the spring conference. 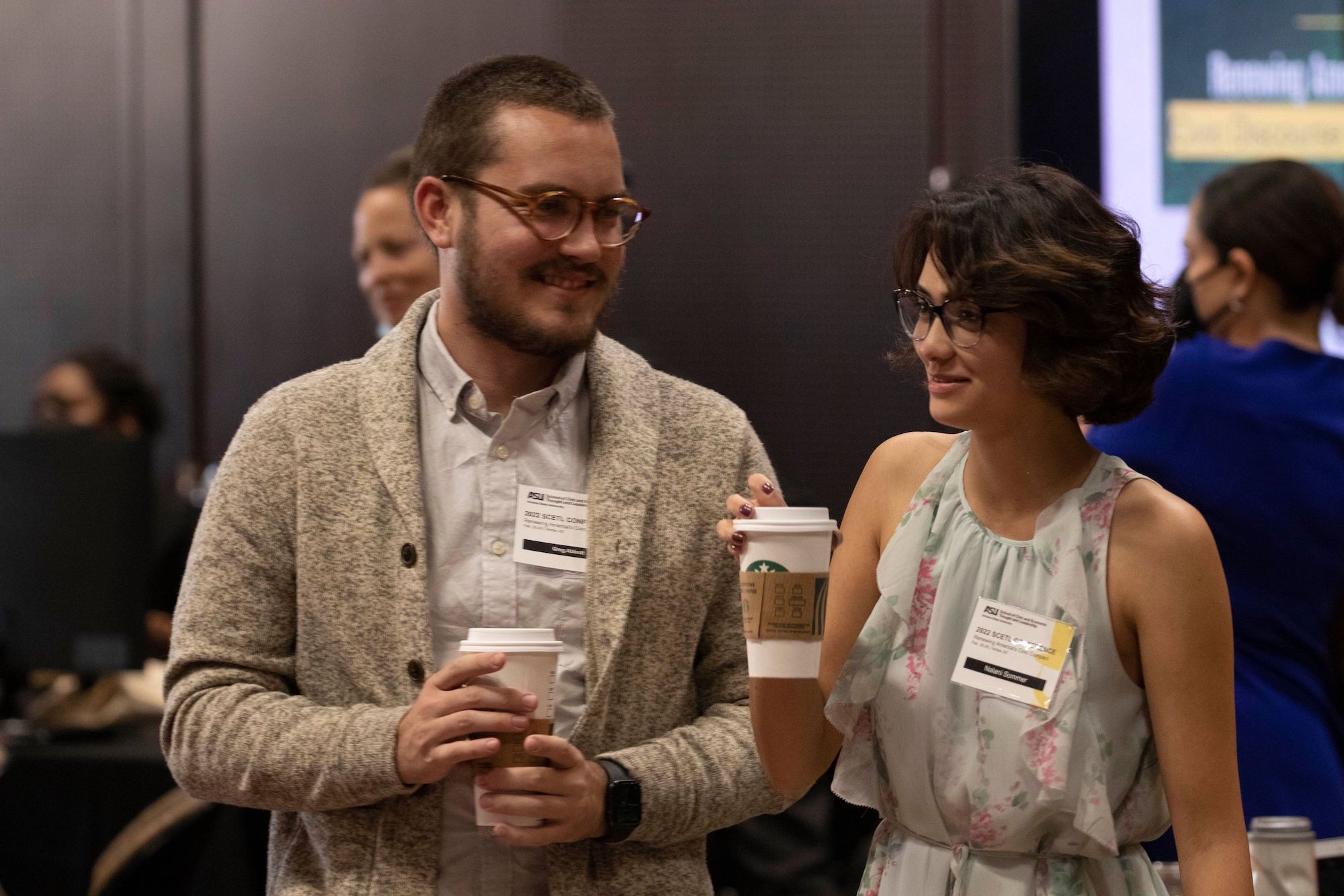 Two School of Civic and Economic Thought and Leadership students at the spring conference. 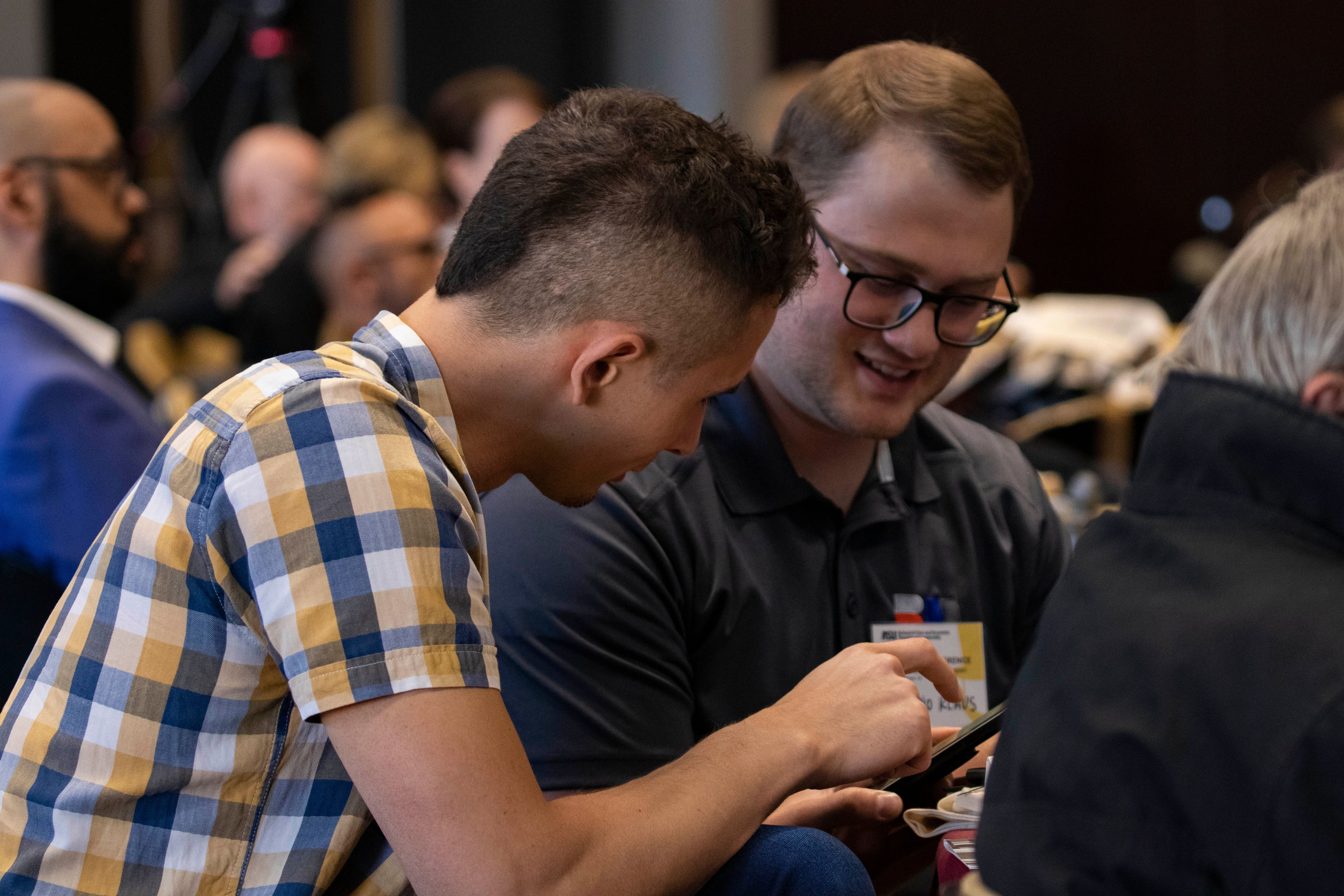 ASU students talk with each other at the spring conference.

A legacy built on love of construction

A single word suffices to describe the most valuable lesson George J. Graef Jr. taught his two children.“Perseverance,” says Jill Graef, the eldest of his daughters.“In your lifetime, you will encounter many obstacles, and how you respond to those obstacles defines you as an individual,” she says, summing up the primary message of the guidance her father provided.“He was the most respons...

A legacy built on love of construction

In the more than 50 years since graduating from ASU, George J. Graef succeeded as a business owner, community leader, education advocate and family man

“Perseverance,” says Jill Graef, the eldest of his daughters. 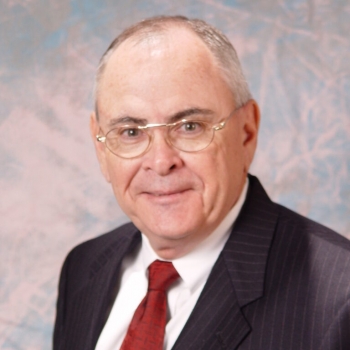 Among family, friends and business associates, George J. Graef Jr. became known not only for his success in the construction industry, but for his especially fervent efforts to help advance the Del E. Webb School of Construction in the Ira A. Fulton Schools of Engineering at Arizona State University. Photo courtesy the Graef family Download Full Image

“In your lifetime, you will encounter many obstacles, and how you respond to those obstacles defines you as an individual,” she says, summing up the primary message of the guidance her father provided.

“He was the most responsible, hardworking and determined man you could ever have the pleasure of knowing. He had an inner strength that was admirable, and even though he’s not here, I still get my strength from him every day,” she says. “You get up, you go to work and you keep going. That is what he always did.”

Jill Graef worked alongside her father for 22 years and today, with her sister Julie’s husband, Tim Golladay, runs Graef Construction, Inc., the Peoria, Arizona-based subcontracting company founded by her father in 1994 and managed by him for many of the 50-plus years he spent in the construction industry.

George J. Graef Jr., known to friends and business associates by his nickname, Jay, died Nov. 17, 2021, at age 74. He began working in his chosen profession at 22, soon after his graduation in 1970 with a degree in construction from Arizona State University.

His perseverant spirit was evident even at that young age, when during his sophomore year, he was injured in an automobile accident that put him in a body cast. According to what Jill Graef has been told, he was advised to take a year off from school but refused.

“I was told that his parents hired a tutor, and he was able to continue his schooling from home for at least a semester,” she says. “He was in that cast for nine months, but he still graduated on time. That was the kind of person he was.”

George Graef was the first in his family to graduate from college and “loved being a member of the ASU alumni,” Jill Graef says.

Because of his injury and other circumstances, “he always regretted that he wasn’t able to join more student clubs and activities,” she says. “So, after he graduated, he made up for it by being very committed to the school for the rest of his life.”

Her father, who filled his business and home offices with ASU memorabilia, “was one of those people who truly enjoyed what he did for a living, and he was devoted to ASU for giving him the opportunity to be in the construction industry,” she says. “He was very proud of (ASU’s Del E. Webb School of Construction) and what it has achieved over the years. He wanted me to go there.”

Jill Graef instead graduated from ASU with a business degree, while her sister earned undergraduate and graduate degrees in education.

The construction school is part of the School of Sustainable Engineering and the Built Environment, one of the seven Ira A. Fulton Schools of Engineering at ASU. 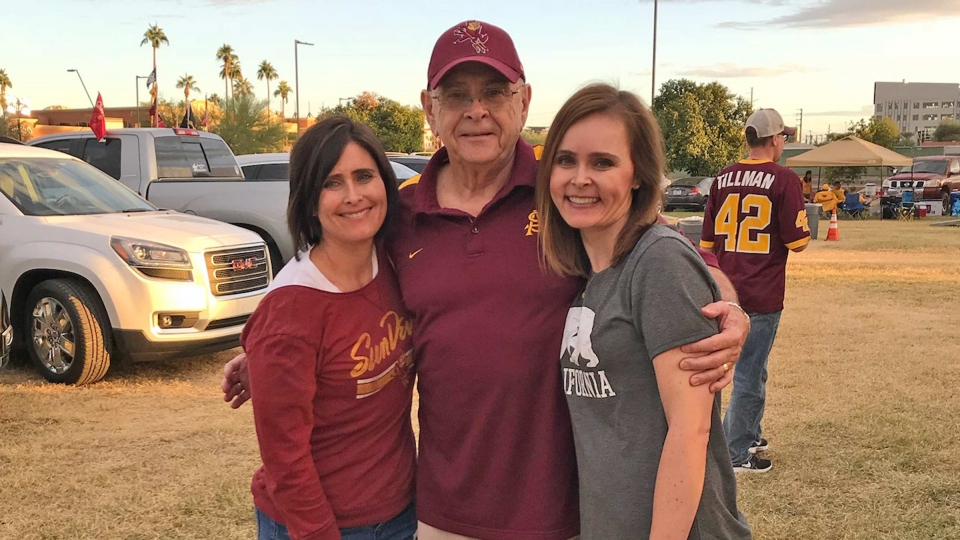 The late Arizona State University graduate George J. Graef Jr. is pictured with two other ASU alumni, his daughters Jill Graef (left) and Julie Golladay (right). Jill, who now helps to lead her father’s construction company, says that because of the value her father placed on higher education, it “was never an option” for she and her sister to not go to college, and preferably to go to ASU. Photo courtesy the Graef family

ASU construction school was part of the family

Graef was actively involved in the construction industry community throughout his career. For 20 years, from 1992 to 2012, he served on the Del E. Webb School of Construction’s alumni board, including a long stint as its president. He also organized the annual golf tournaments, which raised money for the school.

In 2004, he was named to the school’s Academy of Distinguished Alumni Hall of Fame for his career achievements and community service. The honor recognizes outstanding alumni who “embody the spirit of the New American University and who show excellence in their professional work as well as compassion and support for their communities.”

“Taking care of his family was first and foremost in his life,” Jill Graef says, adding that he considered people who were involved with ASU’s construction school a part of his family.

Matthew Eicher, assistant director of the School of Sustainable Engineering and the Built Environment, collaborated with Graef off and on for about 20 years.

Over that time, Eicher saw Graef join several other ASU construction graduates in the mid 1990s to revive the Del E. Webb School of Construction’s alumni chapter, whose activities and membership had been waning.

Eicher recalls the group eventually being officially recognized by the ASU Alumni Association “as an exemplar of an active alumni chapter and the way chapters should operate.”

He also remembers how Graef and a few other enthusiastic construction school supporters undertook efforts to reach out to teachers at local high schools and community colleges to inform them about construction education opportunities at ASU for young students.

“On their own time, they would take prospective ASU students from different high schools to project sites to show them the construction field in action,” Eicher says. “Jay and the others just went above and beyond in promoting ASU.”

Graef also served on the board of directors for the Arizona chapter of the Associated General Contractors, or AGC, and chaired its education committee for several years.

“Jay was very engaged with our chapter and very committed to helping students transition into the industry,” says the AGC chapter’s president, David Martin, an ASU graduate.

“He did a lot to make sure AGC and ASU were engaged with each other,” Martin says. “He also helped us engage with Northern Arizona University. He believed in the industry. He was committed to the betterment of our industry, of education and of individuals. That’s just who Jay was.”

Commitment to company and community

Jill Graef says her father also donated much of his time, as well as financial support, to a variety of local community events and charity benefits throughout his life. It all added up to a very busy life, and family members sometimes suggested he slow down a bit.

“He always talked about going fishing, but he never went. He didn’t take vacations,” she says. “He was an extremely hardworking man. I tried to talk him into retiring but he didn’t want to.”

Still, he managed to spend a lot of time with his family — which to him, she notes, included his golden retriever, Jonah Boy — and enjoyed ASU Sun Devil football games, as a season ticket holder for 51 years.

About an equal number of his years were spent with his wife, Rita, whom he met at his first job after college, with Mardian Construction in Phoenix.

His legacy will live on through Rita, Jill Graef says, “and the successful company he created, and in the determination that his daughters and granddaughters inherited from him.”