There are a couple of reasons Arizona State University Professor Bernard Young — who has a PhD in philosophy from Cornell — gives students when they ask why he calls himself a doctor when his expertise is in art education.

The most important reason?

Established in 2020, the goal of LIFT is to enhance and support the lived, teaching and learning experiences of Black students, faculty and staff.

And if the initiative is successful, Young’s statement won’t be the case much longer – much of it is geared toward increasing not only the number of Black students, faculty and staff at ASU, but also the opportunities for them to advance in academia.

Jessica Salow, archivist of Black Collections at ASU Library — a new role made possible by the LIFT Initiative — hosted the public event Monday via Zoom.

“One of the things that I really appreciate about the LIFT Initiative is that it's very specific and focused attention to Black faculty, staff and students,” Salow said, “… and without that support from the university, my position … and Black Collections in general just would not be here today.”

The J. Eugene Grigsby Jr. Papers are named for one of the first Black professors to join ASU’s fine arts department. Young, whom Grigsby would eventually convince to take his place on the faculty at ASU when he retired, recalled the day he met Grigsby.

It was the late 1970s, and Young was attending one of his first art education conventions when he saw a crowd gathered around a confident Black man. 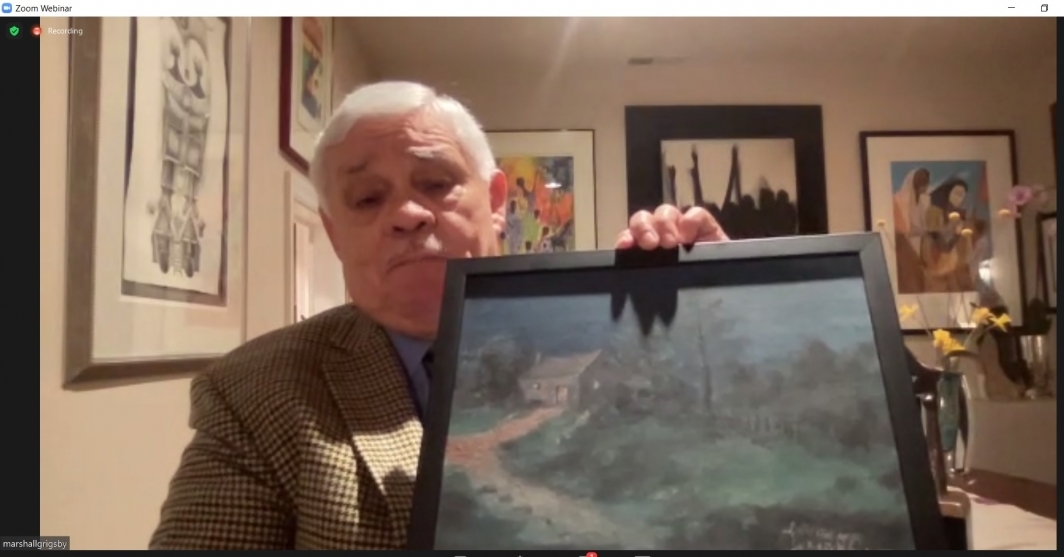 Marshall Grigsby, son of J. Eugene Grigsby Jr., holds up his father's first painting, which he completed at the age of 12, for attendees of ASU Library's virtual event celebrating the elder Grigsby's life and work Monday night. Marshall Grigsby points to a painting behind him, titled "The Protestors," one of his father's works that was influenced by the civil rights movement of the 1950s and '60s. “He had great charisma,” Young said of Grigsby. “And I thought, my goodness, let me run over here and find out who this person is.”

The pair became friends and colleagues, and over the years, Young came to understand and admire both Grigsby’s teaching and general life philosophies.

“Dr. Grigsby was not confused about his belief that we needed to uplift African Americans,” Young said, calling him a “cultural entrepreneur” who used his influence in the community to bring a variety of artists, writers and entertainers — including Romare Bearden, Maya Angelou and Harry Belafonte — to Phoenix, exposing the Black community here to concepts and ideas many had never seen before.

A native of North Carolina and a painter since the age of 12, Grigsby was persuaded to uproot and head west to Arizona when he was offered a position to teach art at the all-Black Carver High School in 1946. When Carver High School closed, Grigsby briefly taught at Phoenix Union High School before coming to ASU in 1966.

At ASU, Grigsby taught art education and served as the adviser to Give a Damn Art Teachers (GDAT), a student organization formed in the late 1960s to give students opportunities to interact with learners from a wide variety of ethnic and socioeconomic backgrounds.

Young was joined Monday night by Grigsby’s son, Marshall, who shared that, although art education was his father’s passion, his interests were broad and varied. The elder Grigsby was also at times a band leader, a poet, a playwright, a photographer, a carpenter and an economic entrepreneur.

Marshall relayed how his father, wishing to further his education after graduating with a bachelor’s degree from Morehouse College in 1938 but finding himself without the funds to do so, decided to incorporate himself, selling shares to friends and family that would be redeemable in the form of future artworks.

“By doing that, he was able to generate enough money to get himself to the Big Apple, and upon arriving there, he encountered a whole new world of art and met lifelong artist friends and mentors,” Marshall said.

Later, in order to get his PhD, Grigsby would pack his whole family in the car and drive from Arizona to New York City for the summer.

“He did that for 10 years in a row,” Marshall said, until Grigsby obtained his PhD from NYU in 1963. “He did that not because he loved to drive, but he did that because the Phoenix school system would not allow him time off to work on a doctorate. And so, he was determined to make that happen, and that's what he did, and that was the kind of person that that he was.”

Answering a question from an attendee as to what Grigsby might think of ASU’s LIFT Initiative if he were alive today, Young didn’t hesitate: “I think he would love it.”

“He would be one of your strongest cheerleaders,” Marshall added, “saying, 'Keep on doing what you're doing, and spread the word so that more and more can be aware of what's happening in the area of inclusiveness and outreach that's taking place.'”

Four Sun Devil pitchers combined to allow only one run in a dominant effort on the mound. ... Four Sun Devil pitchers combined to allow only one run in a dominant effort on the mound.