On Feb. 27, the communitywide education program and exhibit "Holocaust by Bullets" will open on Arizona State University’s Tempe campus.

"Holocaust by Bullets" is a program of Yahad-In Unum, a nongovernmental organization based in Paris and founded by Father Patrick Desbois, a Catholic priest and president of Yahad-In Unum. The exhibit highlights the difficult research needed to identify and document the murders of more than 2 million Jews and Roma in the former Soviet Union. It looks at 2,700 execution sites across 11 countries that were made by Nazi killing units. 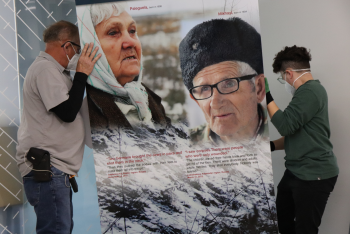 The Phoenix Holocaust Association (PHA) sponsored bringing the exhibit to the ASU campus and worked with the School of Historical, Philosophical and Religious Studies (SHPRS) to make it a reality. This exhibit is part of a series of programming for the 10th annual Genocide Awareness Week in April, which is hosted by SHPRS in collaboration with multiple units at ASU, Northern Arizona University and the University of Arizona.

“At the core of the PHA program is the exhibit at ASU that provides visitors to the ASU Library the opportunity to learn about the organized murder of Jews in broad daylight through photographs and quotes from eyewitnesses,” said Sheryl Bronkesh, president of PHA.

This will be the first time the exhibit has opened since COVID-19 was declared a pandemic in March 2020. Assistant Professor of history Volker Benkert led the charge in organizing the exhibit’s arrival.

“Auschwitz-Birkenau is the widely recognized symbol of the Holocaust representing the systematic and industrialized murder of Jews, Roma and many others by Nazi Germany,” Benkert said. “Yet, Father Desbois' work draws attention to the ‘Holocaust by Bullets,’ the murders committed by SS and other units all over Eastern Europe that ran in parallel to the planned murder through starvation and labor in ghettos and camps and the killing centers such as Auschwitz.”

The exhibit will launch on Feb. 27 at 3 p.m. in Hayden Library. This kickoff event will feature keynote speaker Rachael Cerrotti, an award-winning author, photographer, educator, audio producer and inaugural storyteller-in-residence for the University of Southern California Shoah Foundation.

Cerrotti launched a narrative podcast called “We Share the Same Sky” in 2019 where she shares the story of her journey to retrace her grandmother’s Holocaust survival story over a decade. In 2021, Cerrotti published a memoir of the same title.

“I’ve been very aware of Father Desbois and all of his work, and it’s incredible,” Cerrotti said. “To be asked to take some time and think about how the work he’s doing connects with the work that I’ve been doing, it’s been an exercise for me to pay attention to different things, to be encouraged to make connections that no one’s asked me to make before and I really appreciate the opportunity.”

Those wishing to attend Cerrotti’s talk can register to join in person or online.

Other programming associated with Genocide Awareness Week includes a Holocaust Educators Conference on Feb. 28 in conjunction with the Bureau of Jewish Education, and on April 4 a concert by the Phoenix Boys Choir preceding Father Desbois’ keynote speech and a Rural Street Klezmer Band concert.

In an effort to support a racially and ethnically diverse student population and help strengthen the pipeline of diverse accounting talent, the W. P. Carey School of Business at Arizona State University has announced its collaboration with the Deloitte Foundation on the Deloitte Foundation Accounting Scholars Program (DFASP).Over the next six years, the DFASP expects to fund $30 million in schol...

Over the next six years, the DFASP expects to fund $30 million in scholarships for students pursuing a fifth-year master’s degree program in accounting from select Association to Advance Collegiate Schools of Business (AACSB) accredited colleges/universities, including the W. P. Carey School of Business at ASU, in an effort to support students with a record of a commitment to diversity, equity and inclusion. Participating schools and the Deloitte Foundation will cover 100% of tuition (excluding books and living expenses) for selected students. 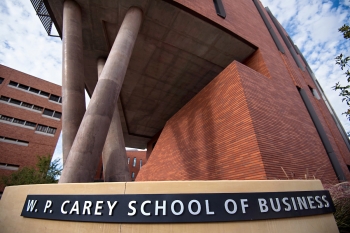 The DFASP is a critical tenet of Deloitte’s Making Accounting Diverse and Equitable (MADE) initiative, a $75 million commitment to generate more opportunities and leadership pathways for the next generation of certified public accountants (CPAs). MADE aims to transform the future of the accounting profession, combining both financial support and resources to help address the identified barriers faced by racially and ethnically diverse students, and support them as they chart their pathway from high school to business professional to leadership in the profession.

To be able to take the CPA exam in many states, including Arizona, 150 college credit hours are required — which is more than a traditional four-year college degree. That necessary fifth year will be covered through the DFASP for selected students,

The effort further supports ASU’s charter, which calls for the university to measure itself based on whom it includes, not whom it excludes.

“The Deloitte Foundation Accounting Scholars Program is a vital and appreciated step in supporting students who are interested in pursuing a master’s degree in accounting,” said Amy Ostrom, interim dean of the W. P. Carey School and PetSmart Chair in Services Leadership. “We appreciate the Deloitte Foundation’s support to help make careers in business more accessible to students and are proud to participate in this initiative.”

Ken Udenze, Arizona marketplace leader and managing partner, Deloitte LLP, said, “The Deloitte Foundation’s collaboration with Arizona State University represents an important action toward creating an accounting workforce – in Arizona and beyond – that is reflective of our diverse society. I’m thrilled to be a part of helping to increase diversity in the accounting profession.”

The application period for the 2022–23 school year is open now, and scholarships will be granted in 2022. Interested students should apply for admission to ASU’s W. P. Carey School of Business following standard criteria and processes for admission, and then separately apply to be considered for the DFASP. Each school will select the scholarship recipients.

For more information, visit the scholarships and resources page or contact the W. P. Carey graduate programs office at 480-965-3332. Learn more at the Deloitte MADE website.