As global challenges go, significantly reducing the amount of harmful greenhouse gases that have accumulated in the Earth’s atmosphere and oceans is most certainly among the most daunting. Those gases, especially carbon dioxide, to a large degree are leading to increasingly threatening climate changes, including global warming.

Experts warn the combined effects of these changes will have detrimental impacts on the planet’s environmental health and habitability, leading to hardships for much of the world’s population. But some of the actions needed to prevent those dire circumstances would mean upending many conventional practices in economics, commerce and industry, as well as running against the grain of strongly held political and cultural viewpoints. 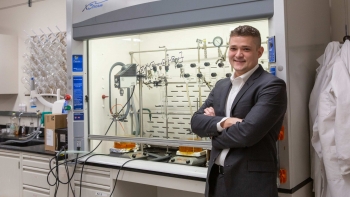 Matthew Green, an associate professor of chemical engineering in the Ira. A Fulton Schools of Engineering at ASU, is working on advances in technologies to capture and use greenhouse gases in the atmosphere that currently pose environmental threats, but could instead be repurposed to drive innovative industrial processes. Green was photographed in his research lab at ASU’s Tempe campus. Photo by Erika Gronek/ASU Download Full Image

One approach science and engineering organizations are using to calm consternation about such societal disruptions is to focus on achieving the technological advances needed to prevent climatological chaos.

Chemical engineer Matthew Green, for instance, points to the possibilities for capturing carbon in the atmosphere and using it to develop new clean energy sources and fuels.

“We are at a tipping point. It won’t be enough to simply take greenhouse gases out of the atmosphere.” says Green, an associate professor in the Ira A. Fulton Schools of Engineering at Arizona State University.

“What we need to do is capture both the carbon materials we have already emitted into the atmosphere, trap the carbon dioxide we still emit and transform it so we can use it in new kinds of products and processes that won’t degrade our environment,” he says.

Green’s work in this area is about to expand. He recently collaborated with colleagues on two research project proposals that won support from the Research Corporation for Science Advancement, or RCSA, and the Alfred P. Sloan Foundation, with additional support from the Climate Pathfinders Foundation.

Green, who teaches in the School for Engineering of Matter, Transport and Energy, one of the seven Fulton Schools, is now a member of two of the eight new Scialog: Negative Emissions Science Teams of engineers and scientists tasked with advancing technologies to remove greenhouse gases from the atmosphere and oceans.

RCSA’s Scialog program — the name is short for science and dialog — supports projects with the potential to provide innovative solutions to global-scale problems.

In the second year of the program’s negative emissions initiative, 22 annual funding awards of $55,000 each are going to 20 researchers. Green, as a collaborator on two projects, is receiving two of those monetary awards.

For the project called Electrocatalytic Activation and Cycling of Moisture-Swing Direct Air Capture Materials, he is teaming with Gary Moore, an associate professor in ASU’s School of Molecular Sciences, and Emily Ryan, a Boston University associate professor of mechanical engineering.

Both projects have the dual focus of creating systems and methods to effectively remove carbon dioxide from the air and seawater, and to design processes that would convert carbon dioxide into fuels and hydrocarbon materials, which are used in the production of lubricants, plastics, fibers, rubbers, solvents and industrial chemicals, among other manufactured materials.

Green says he sees potential for this work to spawn a new field that some already are calling “carbonetics,” which could provide resilient materials for a wide range of industries.

“It’s a brand-new area of exploration right now, but I think it is already showing the potential for a tremendous upside,” Green says. “That may take many years to happen, but I’m excited about the possibilities.”

The RCSA says endeavors like the ones by Green’s teams can broaden horizons for applying novel scientific and engineering approaches to conceptualizing and designing technologies to rapidly remove, sequester and utilize greenhouse gases.

Realizing those aspirations, the organization says, would provide the tools to achieve “rapid de-carbonization of the global economy,” essentially providing a path for multiple industries to operate in ways that promote environmental sustainability around the world.

Reaching the goal depends in large part on inventing systems and processes that don’t emit any carbon dioxide, and on gaining support from government and industry leaders for the investments required for transformations as dramatic as what the Scialog teams will work to help achieve, Green says.

The RCSA notes that having to earn this support deepens the challenge for engineers and scientists to demonstrate the benefits of this sharp pivot from the kinds of entrenched industrial operations and technologies that have been the foundations of growing economies for more than two centuries.

Green and his research teammates will also use these two Scialog projects to offer students opportunities to broaden their education. Each of the faculty members involved in the projects is likely to have at least one graduate student and/or postdoctoral researcher assisting them.

Gaining an understanding of the broad spectrum of technological, economic, industrial and societal factors on which the success of this research projects hinges will give those students and assistants an especially multidimensional research experience, Green says.

If the research does, in fact, set the stage for a carbonetics-based industry, he says, “It could be implemented in a range of ways across the economy, and will open opportunities for the next generation of scientists and engineers who are trained to work in that field.”

The Sun Devil Baseball program will lift the lid on the 2022 campaign and the Willie Bloomquist era this weekend at Phoenix Municipal Stadium with a three-game series against Dixie State beginning on Friday, Feb. 18. Opening Night will feature a 6:30 p.m. AZT first pitch, followed by a 6 p.m. start on Saturday and concluding at 12:30 p.m. on Sunday. ... The Sun Devil Baseball program will lift the lid on the 2022 campaign and the Willie Bloomquist era this weekend at Phoenix Municipal Stadium with a three-game series against Dixie State beginning on Friday, Feb. 18. Opening Night will feature a 6:30 p.m. AZT first pitch, followed by a 6 p.m. start on Saturday and concluding at 12:30 p.m. on Sunday.