ASU School of Music, Dance and Theatre to present trio of new works by Guggenheim Fellow

From theatrical comedy to monodrama and performance art, Arizona State University's School of Music, Dance and Theatre will present three thought-provoking works by an artist who uses music to engage communities and effect social change.

Nkeiru Okoye, a Guggenheim Fellow in music composition, is an internationally recognized composer of opera, symphonic, choral, chamber, solo piano and vocal works. She is known for infusing her work with a wide range of musical styles and influences that evoke all the senses and create an extraordinary musical experience that transports the listener to a specific emotion, event or reckoning. 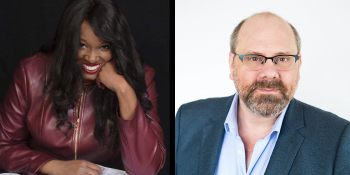 The New York Times named one of her most recent symphonic works, “Black Bottom,” as "one of the most engrossing musical portraits of Black history in the available repertoire."

The trio of performances are a collaboration involving students and faculty from music, dance and theater.

“Nkeiru Okoye’s music is perfectly suited for ASU students, who are well versed in both opera and musical theater,” said Brian DeMaris, artistic director of the Music Theatre and Opera program and associate professor in the School of Music, Dance and Theatre. “Both operas are delightful, clever, tuneful and witty, and our ASU faculty, staff and students have done remarkable work bringing this production to life. In both pieces, the audience will enjoy getting to know these memorable characters and stories, along with exciting music that spans multiple genres.”

“We are very excited to perform works by composer Nkeiru Okoye,” Myers said. “To have a female African American composer in a space where the typical composers are male is a great experience for our students. To see and hear the different sides of stories that she tells through her music will be very interesting for our students and for our audiences. It is not often that you see a composer who takes the chance to explore such a wide range.”

Okoye describes “We’ve Got Our Eye on You,” which is loosely inspired by Greek myth and set in ancient times, as Monty Python-esque Gilbert and Sullivan with a touch of Broadway that delivers a humorous but uplifting message about giving in to desire prematurely.

“600 Square Feet,” conducted by Myers, is an operatic romantic comedy about a young couple who share a small but cozy apartment after a breakup. Rather than move out, they divide up the apartment. Can ex-lovers cohabitate in only 600 square feet without total honesty?

The third work, “Invitation to a Die-In,” is described by Okoye as a “sung story,” written in direct musical response to recent murders of unarmed Black men at the hands of police officers or vigilantes. An African American singer tells the story from the perspective of the deceased, their families, police officers and citizens on all sides of the issue. Musically, it is a dramatic, stark portrait of African American men being hunted and haunted by the past. The work was commissioned in memory of Trayvon Martin.

“This work raises the issues of race and violence head on,” Meyer said. “We hope this powerful and thought-provoking piece helps create an atmosphere for constructive discussion and furthers understanding and compassion around these complex and difficult issues.”

According to Okoye’s composer notes, the preliminary concept for the work came to her on New Year’s Day 2015 in response to the rash of police slayings of Black men. After librettist Cote penned the poignant text, which she immediately loved, she discovered setting the words to music proved to be more difficult than anticipated. What she had not anticipated was her growing horror at writing a deceased character who looks reflectively over the events that cause his murder, and then capturing that murder through music.

Cote, Okoye’s librettist, has been a playwright, librettist and theater critic for more than 20 years. His works include “Blind Injustice,” “Three Way” and “The Scarlet Ibis.” His critical reviews cover Broadway to off-off-Broadway, and he was the longest serving theater editor and chief drama critic of Time Out New York. He is also the author of popular books about the hit Broadway musicals “Wicked,” “Jersey Boys” and “Spring Awakening.”

The stage director for “Invitation to a Die-In” is Rachel Finley, assistant professor of theater in the School of Music, Dance and Theatre. Finley was intrigued when she read the work, and said she wanted to be involved with the performance once she heard the music and words.

Finley said she envisioned the beginning as a spiritual place with the singer’s declaration, “I will be a witness for my Lord,” as he comes forward to speak for many souls that have shared a similar fate to Trayvon Martin’s.

“As a Black mother with two sons, his murder impacted me, as did the discussions about whether or not Black boys and men should wear hoodies and how they were perceived when they did, (which) were truly illuminating,” Finley said. “I incorporated black hoodies (into the staging) as representative of the sacred freedoms that we should all have – the freedom to live and not be harassed or gunned down, executed in the streets without having been charged with or tried for some perceived offense by those who look at Black people as if we were devoid of humanity and value.”

Myers said rehearsing “Invitation to a Die-In” has been personal for him as an African American, and he is excited and honored for the unique opportunity to tell the story.

“I would encourage anyone who is planning to see any of these works to try to see all three of the works to experience the scope of Okoye’s realistic storytelling,” Myers said. “I am excited for the audiences and for our students to have the opportunity to see a real 360 view of the human experience.”

“We’ve Got Our Eye On You”
A Chamber Opera
Music and story by Nkeiru Okoye. Libretto by David Cote.

The Pac-12 Conference announced the Sun Devil women's basketball team's makeup game at Cal, originally scheduled to be played today (Wed., Feb. 16) before being canceled last night, has been declared a forfeit for the Sun Devils in the conference standings. ...

The Pac-12 Conference announced the Sun Devil women's basketball team's makeup game at Cal, originally scheduled to be played today (Wed., Feb. 16) before being canceled last night, has been declared a forfeit for the Sun Devils in the conference standings.