Representatives from the Phoenix Police Department and the Ira A. Fulton Schools of Engineering at Arizona State University met at Phoenix Sky Harbor International Airport over the holiday season to discuss the robots’ use and send them off to their new home. 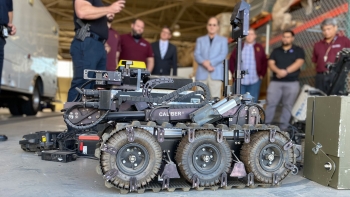 A T-shirt sparked the opportunity. In 2020, Daniel McCarville, an industrial engineering professor of practice in the Fulton Schools, coordinated homeland security hackathons as part of his then-role as the education director for the Center for Accelerating Operational Efficiency, a Center of Excellence established by the Department of Homeland Security. In the first hackathon design challenge, called Drone Defense, students developed countermeasures to prevent or minimize drone threats.

“After the event, a student was wearing his Drone Defense T-shirt while in a store checkout line and someone asked what that was all about,” McCarville said. “The student proudly told the whole story about our hackathon and what kind of project he had.”

The person that student spoke to was Sgt. Anthony Infanger, who happened to work with the Homeland Defense Bureau of the Phoenix Police Department to manage emergencies. From that chance encounter, he reached out to McCarville to find ways to get involved in future events.

During his involvement, Infanger mentioned a pair of bomb squad robots that were not being used by the department and wondered if they could be repurposed to help ASU robotics students. After a long process, the handoff was arranged.

“I enjoyed seeing the students excited at the possibilities the old robots presented,” Infanger said. “There can no better use for old technology than helping students develop the next generation of robots.”

Wenlong Zhang, an associate professor of engineering at The Polytechnic School, one of the seven Fulton Schools, says having these robots is a unique opportunity for students.

“This gives students valuable access to real-world robots that are not usually available in classes or even research labs,” Zhang said. “They will help students understand the operation of robots in hazardous environments, the concepts of human-robot teaming and the positive impacts that automation brings to society.”

Though the robots may not be performing the same bomb defusing duties at ASU, they will likely find a new role as a hands-on learning resource for students in robotics classrooms and be used during extracurricular club activities.

“I thought it was a great idea that will give students a chance to learn about and use real robots from industry,” said Mason Smith, a systems engineering graduate student who attended the donation event.

For example, Borna Mansoormoayad, an engineering undergraduate student with a concentration in robotics, plans to study certain parts of the robot that didn’t meet failsafe design criteria and had previously failed during use.

Students and faculty who attended the donation event received a tour of the bomb squad facility and learned how incorporating robots supports public safety. The ASU attendees found it particularly valuable to learn what the police department viewed as the strengths and weaknesses of different robotic systems.

“At the end of the day, that’s how engineering is evaluated,” Mansoormoayad said.

Smith agrees, adding that learning situations in which the robots’ capabilities didn’t match their users’ needs “is an important lesson to any designer ... so this can be mitigated.”

The robotics students and researchers left the donation event with a better idea of what they should focus on for high-risk, dangerous environments.

“It will be great if they can apply their knowledge and interests to make these robots more efficient and easier to use by human operators,” said Zhang, whose research focuses on safe and efficient human-robot collaboration.

Partnerships like this are mutually beneficial for the university and community organizations.

“I believe such partnerships will help students understand how the knowledge they learn in class connects to the real world and inspire them to pursue a career that allows them to continue learning and innovating in that field,” Zhang said.

McCarville says bringing in community partners who do or make things students can relate to lends relevance to what they’re learning and shows them why it’s important.

For senior capstone projects, students often work with local industry and government partners to develop solutions to engineering challenges. Students who have worked with the Transportation Security Administration, for example, have even had their efficiency and technical solutions implemented at Phoenix Sky Harbor and other airports.

Infanger says ASU has always been a great partner with the Phoenix Police Department on a variety of projects, and Fulton Schools faculty are excited about potential upcoming opportunities to work together.

“The Phoenix Police Department deals with some fascinating problems, and it would be really cool to be able to serve the people who serve us,” McCarville said. “As an engineering school, we have the ability to help a lot of organizations with various focused problems. To do something meaningful and provide service is pretty inspiring. I think our top students would want to participate.” 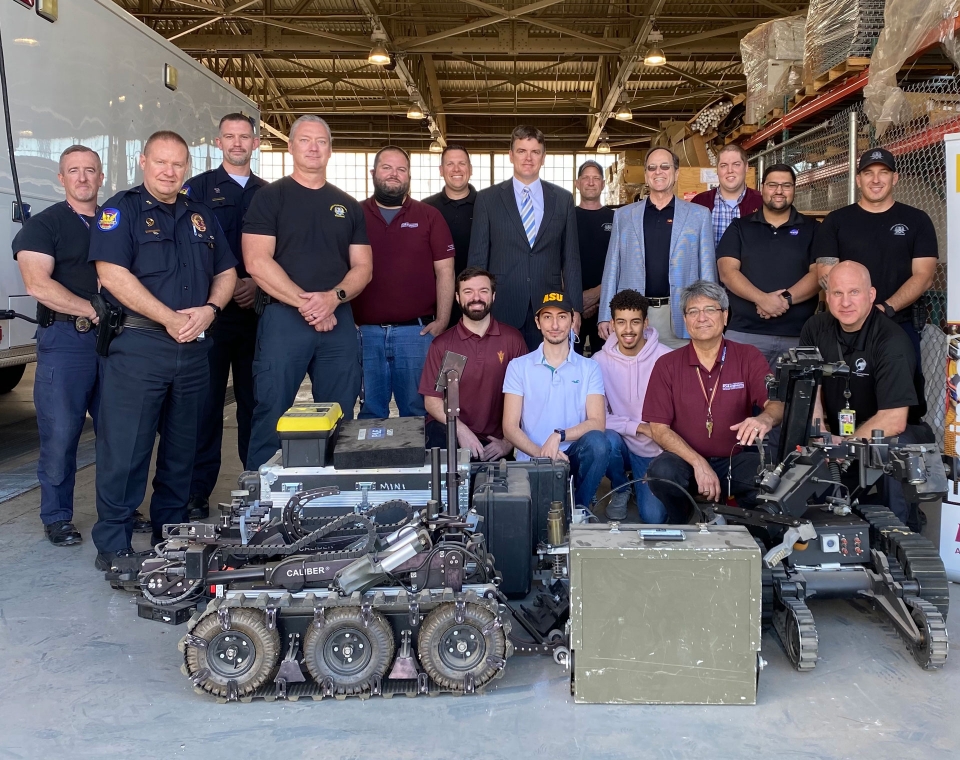 Sun Devil WBB unable to keep up with No. 2 Stanford

The Sun Devils were paced in scoring by Jade Loville, who led all players with 19 points and surpassed 1,000 career points. ...

Sun Devil WBB unable to keep up with No. 2 Stanford The Sun Devils were paced in scoring by Jade Loville, who led all players with 19 points and surpassed 1,000 career points.