From his home in the northwest corner of New Mexico, Preston Toehe spends his free time with his laptop open, reading about drones.

Toehe, a mining engineering technician on the Navajo Nation and ASU Online geographic information science (GIS) student in the School of Geographical Sciences and Urban Planning, spent the better half of last year conducting research to adapt the latest unmanned aerial systems technology into his employer’s mining operations.

“I was interested in mapping, design, photography and making numerical data visual,” Toehe said of his interest to build on his professional experience and advance his formal education in GIS at ASU. “I want to use a GIS background and implement mapping designs to help progress the mining industry further and for land reclamation, to get the land back to the way it used to be or even better when handing it back to the Navajo Nation for better grazing.”

For his diligence in geographical surveying and commitment to better his community, Toehe was selected to receive one of five inaugural scholarships as part of the College of Liberal Arts and Sciences’ Online Undergraduate Research Scholars (OURS) program — a program that offers hands-on, experiential learning and research opportunities for students enrolled through ASU Online.

“The OURS program means more focused attention on providing our 100% online and remote students the same level of access to research experiences and skill sets as their on-campus counterparts,” said Kaelin Groom, instructor in the School of Geographical Sciences and Urban Planning who, together with Lecturer Andrew Trgovac, serves as a faculty representative for the school.

“As someone who teaches 100% remotely, I'm in a unique position to serve ASU's online population, and I have to say: They are incredible students. I have so much admiration and respect for them. So many of them work full time or have families, tons are active or reserve military, and they are each just so dedicated to getting their degrees. They work so hard — we owe it to them to work just as hard to make sure they are getting the most out of our program.”

Toehe lives in Farmington, New Mexico, with his family, where the nearest university is hours away.

“ASU Online made it possible for me to even attain a bachelor's degree. I can be in the middle of nowhere and as long as I have internet, I’m able to get an education,” Toehe said. “I just want to say, if you think a bachelor's degree is impossible, it's not anymore with the current technology of Canvas. You have school at your fingertips and access to the library and all the resources you want.”

Toehe sees his participation in the OURS program and his education as an opportunity to open up new doors while sharing his knowledge with others along the way.

“I'm getting this geographical information science degree to back up all my experience and give me another stepping stone to pursue a supervisory or managerial position,” said Toehe, who has previously earned associate's degrees in mechanical drafting and engineering technologies. “This is another extension of myself to become even more multi-disciplined in GIS, which can be applied in fields like city government or management of (Bureau of Land Management) tribal lands.”

“I also wouldn't mind using this experience to help new and up-and-coming students as a liaison for a program called Energy for the local community college here. That would probably be a dream job; using my experience to help out students.”

Can participating in sports keep a young man out of trouble?That was a question asked by Ken Shropshire, CEO of the Global Sport Institute at Arizona State University, who moderated a wide-ranging conversation with two prominent Black writers on Thursday.“You can’t ask that of two people who have been prison,” replied Reginald Dwayne Betts, one of the writers.Betts, a poet and MacArthur Fel... 2 formerly incarcerated men weigh in on coaching and father figures

Can participating in sports keep a young man out of trouble?

That was a question asked by Ken Shropshire, CEO of the Global Sport Institute at Arizona State University, who moderated a wide-ranging conversation with two prominent Black writers on Thursday.

“You can’t ask that of two people who have been prison,” replied Reginald Dwayne Betts, one of the writers.

Betts, a poet and MacArthur Fellow, and Mitchell Jackson, a Pulitzer Prize-winning journalist, joined Shropshire in the webinar, which was titled “Toward A Different Kind of Winning: Nurturing Black Creativity and Masculinity.”

Betts and Jackson both have been incarcerated. The webinar was in collaboration with ASU’s Center for Imagination in the Borderlands and the ASU Art Museum’s current exhibition, “Undoing Time: Art and Histories of Incarceration,” which is on display until Feb. 12.

Betts, who was convicted as a teenager for a carjacking, excelled at youth basketball, but never had the conversations about life beyond the dream of becoming a professional player.

“A lot of us lived in a vacuum, so we only thought in a short-sighted way about what was possible,” he said.

He also played while he was incarcerated, and caught the attention of a coach.

“He said, ‘I could get you into a Division 3 school on a scholarship,’” Betts said.

“I didn’t know Division 3 existed. It’s been 20 years and I’ve carried that compliment around with me. If somebody had told me (earlier) that I wasn’t going to get to the NBA, I could have gone to an HBCU and gotten a great education.” 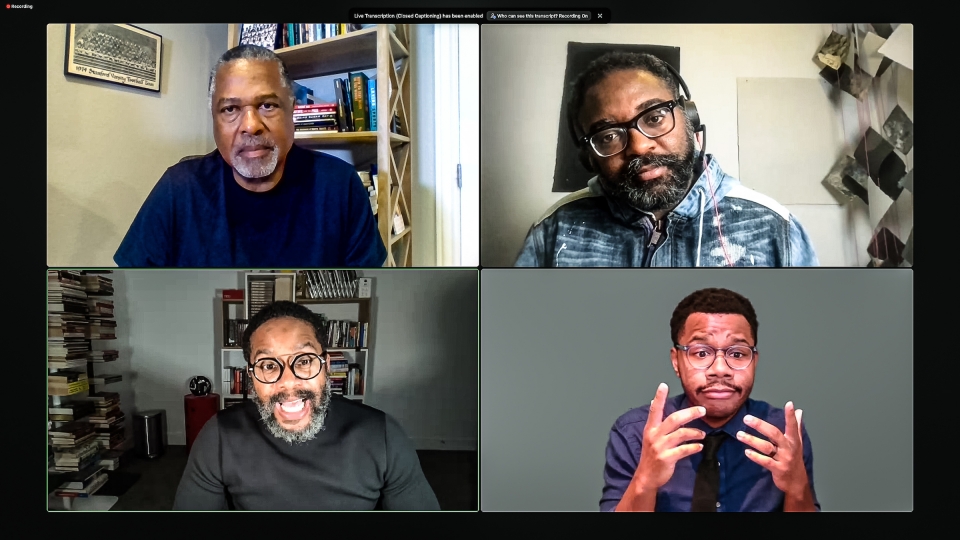 Shropshire asked about the emphasis on sports. “With the idea of being a poet or a writer, of being a creative — how much does sports interfere with that space? How would we find a way to elevate the creative path?”

Jackson said that while coaches can create great players with minimal resources, teachers and schools need more support to pave the way for future writers.

“One of the things we need to remember is that for people coming up in tough neighborhoods, the schools’ academic excellence don’t nearly meet the excellence that’s available on the basketball court,” said Jackson, who is the John O. Whiteman Dean’s Distinguished Professor in the Department of English at ASU.

“You could be a brilliant and amazing coach, and all you need is You Tube, a basketball and hours in the gym. But that’s fundamentally not what you need to be an amazing teacher.

“The onus has to be on the structural critiques so we don’t put such a burden on these young athletes, who are like, ‘I can jump out of the gym but I can’t jump into a book I don’t own.’"

“It’s hard to watch Ja Morant or Steph (Curry) or LaMelo (Ball) and not think about really great jazz,” he said.

Betts, who coaches his kids’ basketball teams, talked about the coach as father figure.

“One of the proudest moments of my life is when parents run up to me in the hallway or at (the grocery store) and ask, ‘Are you coaching again?’

“Coaches can be like surrogate fathers,” he said. “It’s being a real presence in someone’s life. You need someone to care about you.”

Betts’ relationship with his own father was fraught, and during the webinar, he performed an excerpt about that from his multi-media solo show, “Felon: An American Washi Tale.” After prison, Betts graduated from Yale Law School and founded Freedom Reads, a nonprofit that provides books to prisons.

Jackson talked about the interplay of basketball and fathers and manhood.

“It’s a rite of passage to beat your father. Sports is one way to physically challenge your father without it feeling like you’re challenging his manhood or his authority. It’s a way to measure how far you’ve grown.

“A lot of fathers, especially Black men, won’t allow that challenge anywhere else in their lives, especially from their sons. It’s a measuring stick.”

Jackson’s uncle was like a father to him, and he vividly recalls the first time he beat the older man on the basketball court.

“He never beat me again, and that confidence materialized in other places for me.”