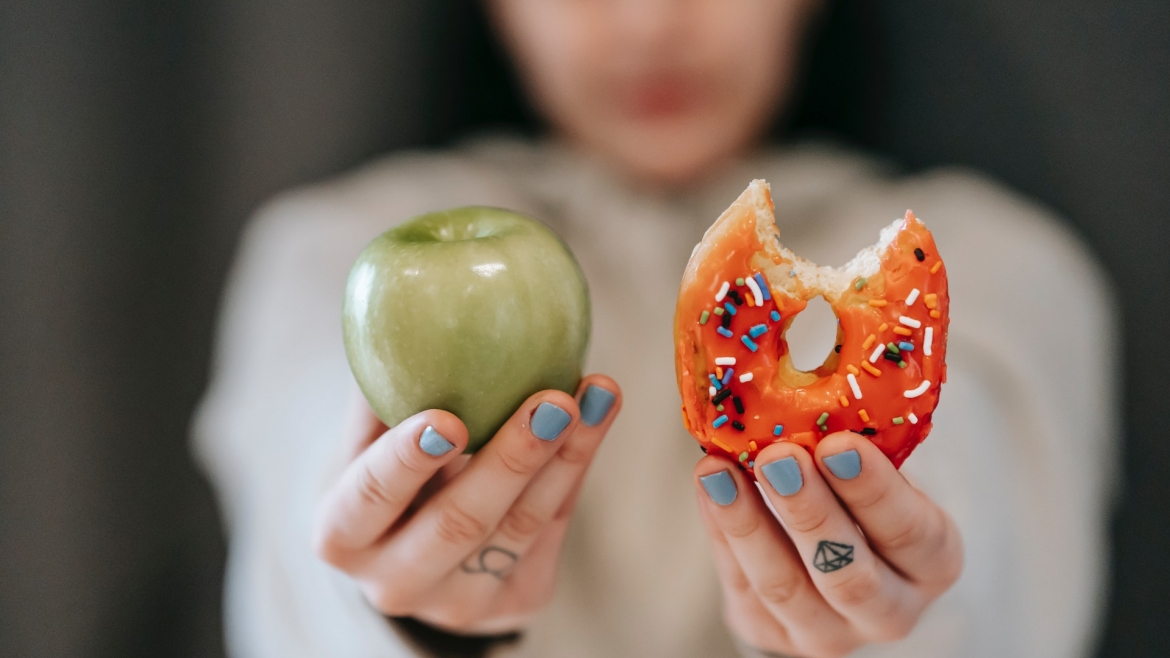 For some people who indulged over winter break, January might be a time of dieting.

But which kind of diet? Banning all treats or allowing some “cheats?”

A new study by a marketing professor at Arizona State University finds that figuring out which type of dieter you are and then sticking to that model might be the best method. And marketers and government policy should take those differences into account and avoid a “one-size-fits-all” approach.

“I think the idea just came from our own experiences with dieting and having some successes and failures,” Mandel said.

“And among us, we had different approaches. Fionna told us that it’s very common in China to have diets with ‘cheat days’ built in,” she said.

“That’s a form of balancing moderation where maybe one day a week you can pig out or do what you want, and for a lot of people, it makes a diet easier knowing you can indulge.”

But not for everyone. Some people embrace the “abstainer” approach.

“I know that for me, once I start indulging, it’s very hard for me to stop,” Mandel said, recalling one Halloween when she pilfered her daughter’s candy.

“That’s when I realized that if I have a little bit, I can’t stop. I need to cut it out of my life.”

The authors were inspired by a concept from lifestyle author and blogger Gretchen Rubin.

“On her blog, she talks about ‘abstainers’ and ‘moderators,’” Mandel said.

“I’ve always been interested in this idea, and I had not seen much in the academic literature about it. I felt like there was probably a gap and there should be a paper about it.”

The authors decided to start with Rubin’s quiz and turn it into a formal scale that measures people’s self-beliefs about diet.

“We started with a big collection of questions and were able to scale the quiz down to eight questions that were the best predictors of which group you fall into,” she said.

The scale includes “yes” or “no” questions such as “Refusing ANY food temptations is an easier strategy for me to keep my diet on track” and “I feel more relaxed knowing that I have the chance to satisfy my cravings with an occasional food indulgence.”

The researchers then ran several studies to validate the soundness of the tool.

Mandel answered some questions from ASU News about the paper.

Question: Is either approach, abstainers or moderators, more successful?

Q: One of the studies you ran involved M&Ms. What were you looking for there?

A: We wanted to see if there was a self-fulfilling prophecy going on. After indulging, would abstainers have more of a problem getting back on the wagon and going back to eating less? And would balancers have an easier time balancing out and eating less later?

It was a complicated experiment design because we can bring people into the lab and give them food and measure what they eat, but we can’t force them to indulge by giving them a brownie because it’s not the same as them choosing to indulge. They would rationalize, “I had to do it because the lab assistant made me.”

We asked them to recall a time in the past when they indulged, like having a slice of cake on their birthday or on Thanksgiving, or when they abstained. And they wrote down their thoughts about when that happened. We wanted to see after recalling an indulgence how much they would eat right afterward.

So we gave them M&Ms and said, “This is a different study. We’re seeing how well M&Ms go with different videos.” And we measured how many M&Ms they ate.

Q: And what did you find?

A: It was indicative of a self-fulfilling prophecy – the balancers who thought about prior indulgence ate fewer M&Ms. Abstainers who were thinking about indulgence ate slightly more M&Ms.

It was a small difference.

Q: And another study you ran looked at attitudes about advertisements?

A: We wanted to look at people’s responses to ads that use taglines emphasizing either abstaining or balancing. So we made some ad mockups of a hypothetical yogurt brand.

We wanted to see if these would appeal differently to abstainers and balancers, and they did.

The balancers showed the strongest differences. They like to see ads that emphasize balance and don’t like ads that emphasize abstaining. People who are balancers don’t like being told they can’t have something. They want the option to make their own choices. They want to eat pizza and cake, and they can do that by balancing with more exercise or salad.

Abstainers reacted similarly to both ads. We don’t know why, but we think most ads out there emphasize balance, and they’re probably used to that.

Q: So what’s the overall messaging?

A: I’m going to speculate here, because this goes a little beyond what we studied.

Some apps already offer customized recommendations but could use our measuring tool to inform people what sort of diets they should follow. And there are all kinds of food delivery services now that could incorporate our quiz to inform on the type of food people might want.

As a member of Arizona State University’s Edson College of Nursing and Health Innovation Alumni Board, Kristin Payestewa-Picazo strives to be a resource and example for current students.“Being Navajo and Hopi and being on the alumni board represents to other Indigenous students that you can achieve this. Historically, we’ve not really been well-represented in the higher echelons of education...

As a member of Arizona State University’s Edson College of Nursing and Health Innovation Alumni Board, Kristin Payestewa-Picazo strives to be a resource and example for current students.

“Being Navajo and Hopi and being on the alumni board represents to other Indigenous students that you can achieve this. Historically, we’ve not really been well-represented in the higher echelons of education. So for me, being in this position is a true honor,” Payestewa-Picazo said. 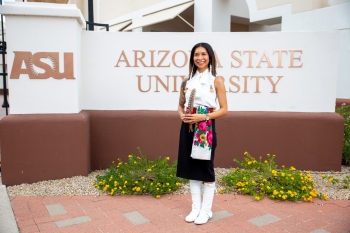 Alumna Kristin Payestewa-Picazo hopes her story can be an example for other Indigenous students. Download Full Image

But getting to this point was not easy for the alumna.

Payestewa-Picazo’s parents struggled with some very personal challenges during her childhood and teenage years. At one point, she lived with her grandparents in northern Arizona because of it. All the while, she had plans to go to college and a good idea of what career path she wanted to pursue.

“I decided I wanted to be a nurse because my grandma on my Navajo side was a nurse,” she said.

However, those plans were delayed as she did her best to cope with the strain of her parents’ ongoing struggles. By the time she was in a position to be able to turn her attention back to school, she had some catching up to do, which meant first attending community college.

After earning an associate degree, Payestewa-Picazo applied to Edson College’s nursing program and was added to the waitlist.

Getting into the highly competitive nursing program was not totally out of the question, but the odds were not necessarily in her favor. So while Payestewa-Picazo waited, she had a decision to make about continuing with her education.

“It sounds so silly, but for students, it’s like your whole world is melting in front of you and there’s nothing behind that. And it’s like, what do I do now? I don’t have a plan B, this was it,” she said.

Payestewa-Picazo’s adviser was able to ease some of her fears and worries by sharing all the degree options available to her and finding a good fit that would still lead to a job in health care.

She settled on community health and graduated with a Bachelor of Science in 2019, but that was really just the beginning.

“Accomplishing that on my own was just amazing. Edson College was where I made my first big break. Getting an undergraduate degree changed my life for the better. During that time, I also found a passion for health care research and enhancing health technology systems,” Payestewa-Picazo said.

She uncovered that passion by taking classes that she likely would not have had the time for if she was in the nursing program. Those courses included exploring modern advances in health care technology and learning ways she could contribute to the industry on a greater scale.

Following that interest, Payestewa-Picazo enrolled in a master’s program, also at ASU, and earned a graduate degree in health informatics. She’s in the process of earning a graduate certificate in clinical research management and is planning to apply to a doctoral program.

Having been through so much, she says her goal as the newly elected vice-chair on the alumni board is to be an inspiration for students who, like her, have experienced rejection and/or maybe don’t have a good family support system.

“They may come from a harsher upbringing or they might just feel like they’re alone because they’re not going to nursing school. I want to help them realize that just because you don’t get into one thing doesn’t mean you can’t do something else,” she said, “and it’s OK to reach out for help if you’re going through that.”

It’s the kind of reassurance she wished a peer had given her as she navigated her early university journey. For that reason, sharing that support and message is really important to her.

Having carved out her own unique path in learning about health care and soon joining the field, Payestewa-Picazo feels she brings a different perspective to Edson College’s alumni board.

She says she is really happy to be a part of it and to hold space for not only Indigenous alumni and students, but for every alumni or student who needs that extra encouragement to follow their interests and to keep going no matter what.

After all, she knows firsthand the value of doing just that, and the immense rewards and unexpected revelations that can come from putting in the work both in and out of the classroom.

“There’s a lot of things inside of my identity that I didn’t know existed until I really pursued myself and my degree. ASU and Edson College helped get me there and helped me find my identity. That, to me, is the most valuable and precious thing that I could have gotten from ASU. For that, I say ahéhee' and askwali, which means thank you in both Navajo and Hopi.”