A simple, marine-dwelling creature known as Trichoplax adhaerens, or T. adhaerens, has some remarkable properties. The organism can tolerate unusually high doses of radiation that would kill most other forms of life. T. adhaerens has another intriguing characteristic: the ability to resist cancer.

In a new study, Angelo Fortunato and his colleagues describe T. adhaerens’ unusual behavior, including its capacity to repair its DNA even after significant radiation damage and to extrude injured cells, which later die. 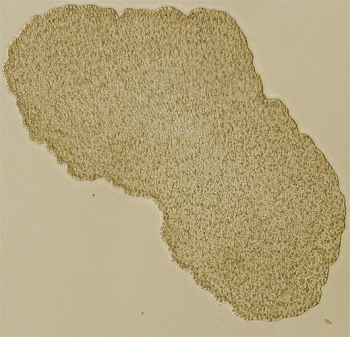 Trichoplax adhaerens is one of the three species belonging to the the phylum Placozoa. T. adhaerens is capable of withstanding enormous doses of radiation and is highly resistant to cancer. Researchers hope investigations of such cancer suppressing mechanisms across the tree of life may advance new methods of cancer prevention and therapy. Photo: Public Domain, by Oliver Voigt CC BY-SA 3.0 Download Full Image

The findings advance scientific investigations of natural cancer suppression mechanisms across life. Insights gleaned from these evolutionary adaptations may find their way into new and more effective therapies for this leading killer. Last year, over 600,000 people lost their lives to cancer in the U.S. alone.

The unusual microorganism observed in the new study is rudimentary in form and easily cultured in the lab. This makes T. adhaerens an attractive model organism, enabling researchers to home in on fundamental processes of radiation tolerance as well as the underlying mechanisms guiding DNA repair, programmed cell death and other natural means of cancer resistance.

Fortunato is a researcher in the Arizona Cancer Evolution Center and the Biodesign Center for Biocomputing, Security and Society at Arizona State University. He is also a researcher in ASU’s School of Life Sciences.

Carlo Maley, a co-author of the new study, is a researcher in ASU's Biodesign Center for Biocomputing, Security and Society; the Center for Mechanisms of Evolution; and School of Life Sciences. He is also the director of the Arizona Cancer Evolution Center.

The research findings appear in the current issue of the journal PLOS Biology.

The development of cancer can be thought of as a perverse form of evolution in action. Just as mutation and natural selection act over time to refine species’ adaptation to their environment and improve their chances for survival, so these processes can provide cancer cells with a suite of tools, enabling them to flourish, evade the body’s immune system, multiply and spread to other areas.

Cancer is an Achilles' heel of virtually all multicellular life on Earth. Cell mutations can arise due to DNA copying errors during cell division, as well as through cell exposure to radiation or other mutagens, which can result in heritable genetic changes.

Since the arrival of multicellular life on Earth over 3 billion years ago, nature has had to contend with cells that reject the cooperative framework multicellularity demands. Such rogue cells commandeer resources within the body for themselves and proliferate in an uncontrolled manner. This is cancer.

Yet the dreaded disease does not affect all life equally. Some organisms manage to escape with unusually low cancer rates, while other species are highly cancer prone. Unlocking the mysteries surrounding these discrepancies across the tree of life has become a major area of research in the battle to understand the disease and better manage it.

Over the course of evolution, some species have developed powerful means of suppressing cancer. Generally, they do this either by trying to prevent mutations from arising in the first place, improving the fidelity of DNA copying mechanisms or repairing damaged DNA, or some combination of these.

Often, crucial cancer-related genes come into play. One of these, a tumor-suppressing gene known as TP53, can act to repair damaged DNA. Where the sequence cannot be repaired, the gene instructs the cell to undergo apoptosis or cell death, preventing the mutation from being duplicated in subsequent cell generations. Elephants, which would otherwise be highly cancer prone due to their size and longevity, carry multiple copies of TP53 and have very low rates of cancer.

The amoeba-like organism T. adhaerens is the simplest multicellular creature ever found on Earth. It is believed to have diverged from other animals some 800 million years ago. First described in 1883 and rediscovered in 1969, it is native to the Red Sea and other temperate waters. Researchers have sequenced the full genome of T. adhaerens, allowing detailed exploration of its genes and their function. 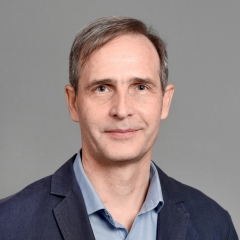 Angelo Fortunato is a researcher in the Arizona Cancer Evolution Center and the Biodesign Center for Biocomputing, Security and Society at Arizona State University. He is also a researcher in ASU’s School of Life Sciences.

In earlier research, Fortunato and his colleagues showed that despite T. adhaerens’ simplicity, the animal exhibits complex social behavior, including cooperative foraging and feeding, although the organism lacks muscle tissue and digestive or nervous systems.

The life cycle of T. adhaerens is also fairly involved. In laboratory cell cultures, the organism reproduces asexually but may have the capacity for sexual reproduction in the wild. Because T. adhaerens has a high cell turnover rate and can survive for decades, it is an ideal test subject for cancer study. Even among cancer-resistant species, placozoans like T. adhaerens appear to be outliers. No member of this species has ever been observed with cancer. The new study explores the organism’s heightened resistance to high level radiation and possible mechanisms of cancer suppression.

T. adhaerens’ mode of asexual reproduction involves shifting existing cells into new individuals. This could leave such animals highly vulnerable to cancer, which could potentially spread through a population. This may be the reason the organism originally evolved a means of ejecting compromised, pre-malignant cells, through extrusion.

Intriguingly, cell extrusion as a means of cancer suppression may be at work in complex organisms, including humans. Most human cancers arise in epithelial tissues like the skin and gut, where extrusion may play a role in ridding the body of cancerous growths.

The study notes however, that this mechanism of cancer suppression in simple organisms like T. adhaerens could backfire in humans if mutated cells are extruded into the bloodstream, remain viable and migrate to other parts of the body.

Unlike mammals, T. adhaerens can withstand enormous radiation exposure and fully recover. They do this using a combination of strategies. When the organisms are exposed to high doses of X-rays, they ramp up the expression of particular genes known to be involved in the DNA repair process as well as genes associated with cell death or apoptosis.

Remarkably, some T. adhaerens were shown to tolerate 218.6 GyGy, or gray units, is a measure of ionizing radiation. of radiation. For comparison, just 3-7 Gy of radiation causes severe damage to mammalian cells. A dose of 6 Gy is generally fatal to humans.

Although high radiation caused catastrophic damage to T. adhaerens’ DNA, the animal’s powers of DNA repair enabled the organism to recover from the assault. Although not all individuals survived the highest doses of radiation, those that did were able to repopulate the culture after 30 days of exposure to 218.6 Gy. A total of 74 genes were significantly overexpressed in T. adhaerens following radiation exposure.

Through a combination of aggressive DNA repair and ejection of damaged cells, T. adhaerens engage in continual bodily renewal, keeping them cancer-free. Understanding such mechanisms may spur new methods of preventing and treating the disease in humans. Other, as-yet-to-be-discovered genes likely play a role in T. adhaerens’ remarkable resistance to cancer, making this tiny creature a treasure chest of information.

The Sun Devil men's basketball games at USC (Dec. 30) and UCLA (Jan. 1) have been postponed due to COVID situations at both USC and UCLA. ... The Sun Devil men's basketball games at USC (Dec. 30) and UCLA (Jan. 1) have been postponed due to COVID situations at both USC and UCLA.