Living, learning and, in many cases, working in health care through a pandemic is no small feat. But that is exactly what Arizona State University’s Edson College of Nursing and Health Innovation’s newest group of graduates has been doing over the past 20 months.

On Dec. 15, their perseverance, resilience and commitment to helping others were recognized during seven intimate, in-person convocation ceremonies in the ASU Health Futures Center. 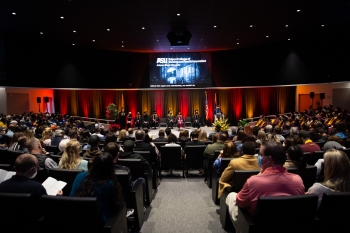 The Edson College welcomed graduates along with their families and friends to celebrate convocation. Photo by Mitchell Tay Download Full Image

“You rose with the need for change. Learning remotely, providing COVID-19 testing, administering COVID-19 vaccines, delivering care through telehealth, wearing personal protective equipment in health care settings, wearing face coverings on campus, social distancing, and demonstrating compassion and care for yourself and others in ways we never could have predicted. This is your legacy,” Associate Dean of Academic Affairs Katherine Kenny told the graduates.

Like the rest of the university, this was also the first time since fall 2019 that Edson College was able to welcome graduates and their families together in person to celebrate receiving their degrees.

“It’s wonderful to have these ceremonies in person and that families and friends could be here to celebrate and join us as we recognize our graduates’ accomplishments,” Dean Judith Karshmer said.

Just more than 600 Edson College students applied to graduate this fall. Nearly half were in undergraduate nursing-related programs. In fact, five of the seven convocation ceremonies were dedicated specifically to this group.

Between the national nursing shortage and multiple COVID-19 surges, these new-to-the-workforce nurses are in high demand and ready for the challenge ahead.

The other two ceremonies were for graduate students, and for students in baccalaureate health programs like health entrepreneurship and innovation and community health. 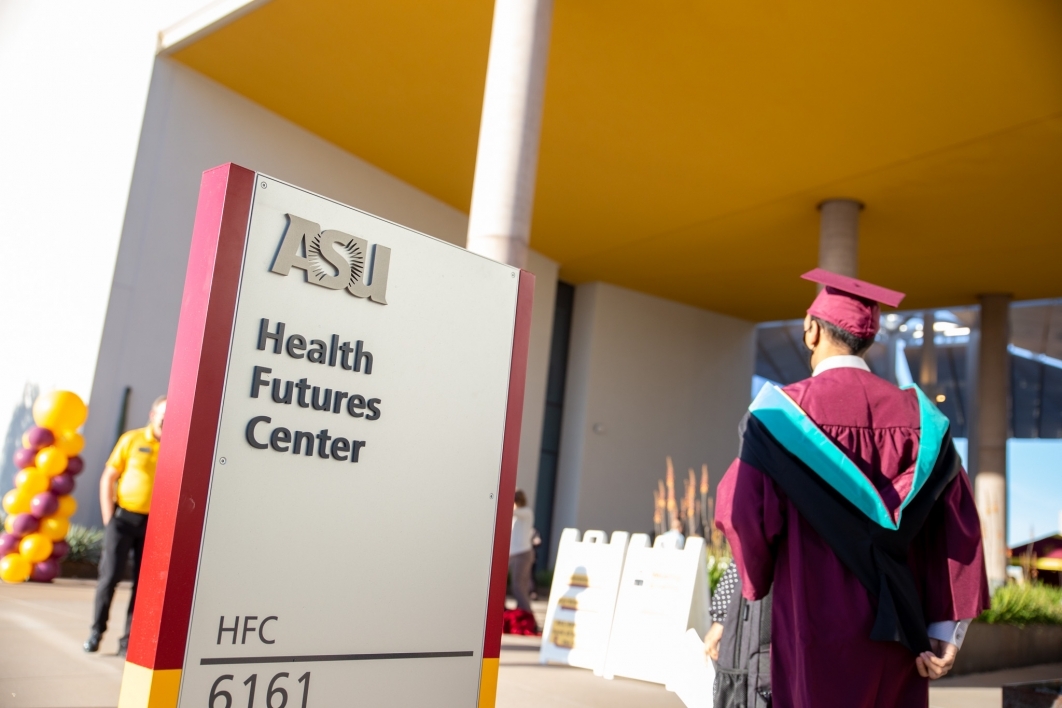 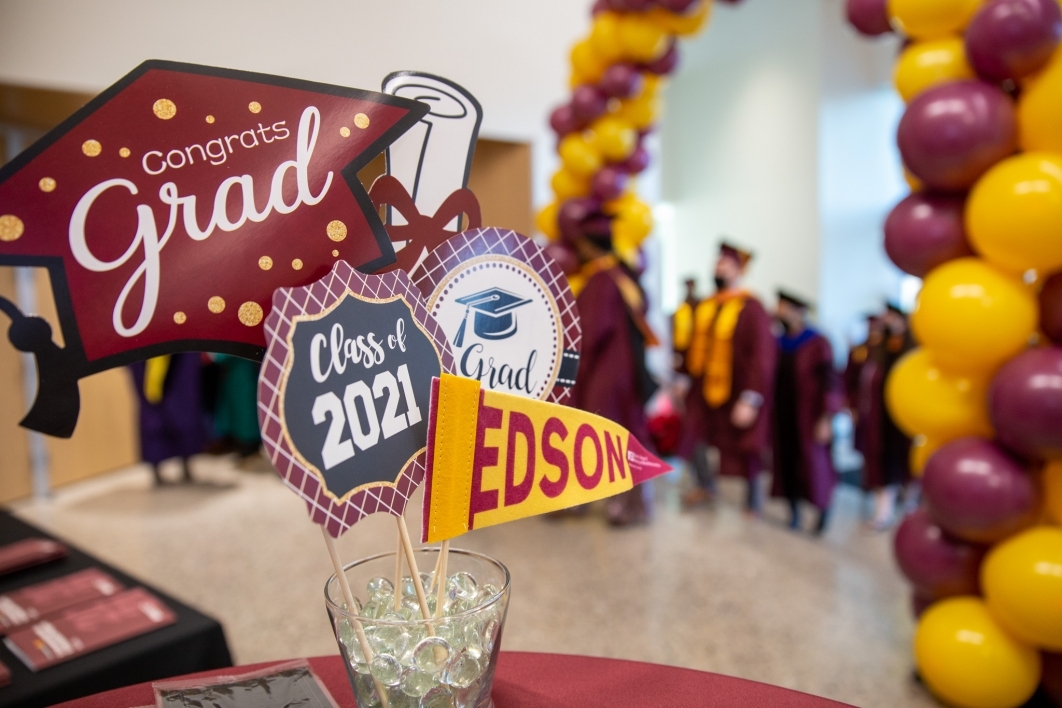 Graduates walked through a festive balloon arch into the auditorium where family and friends were waiting. 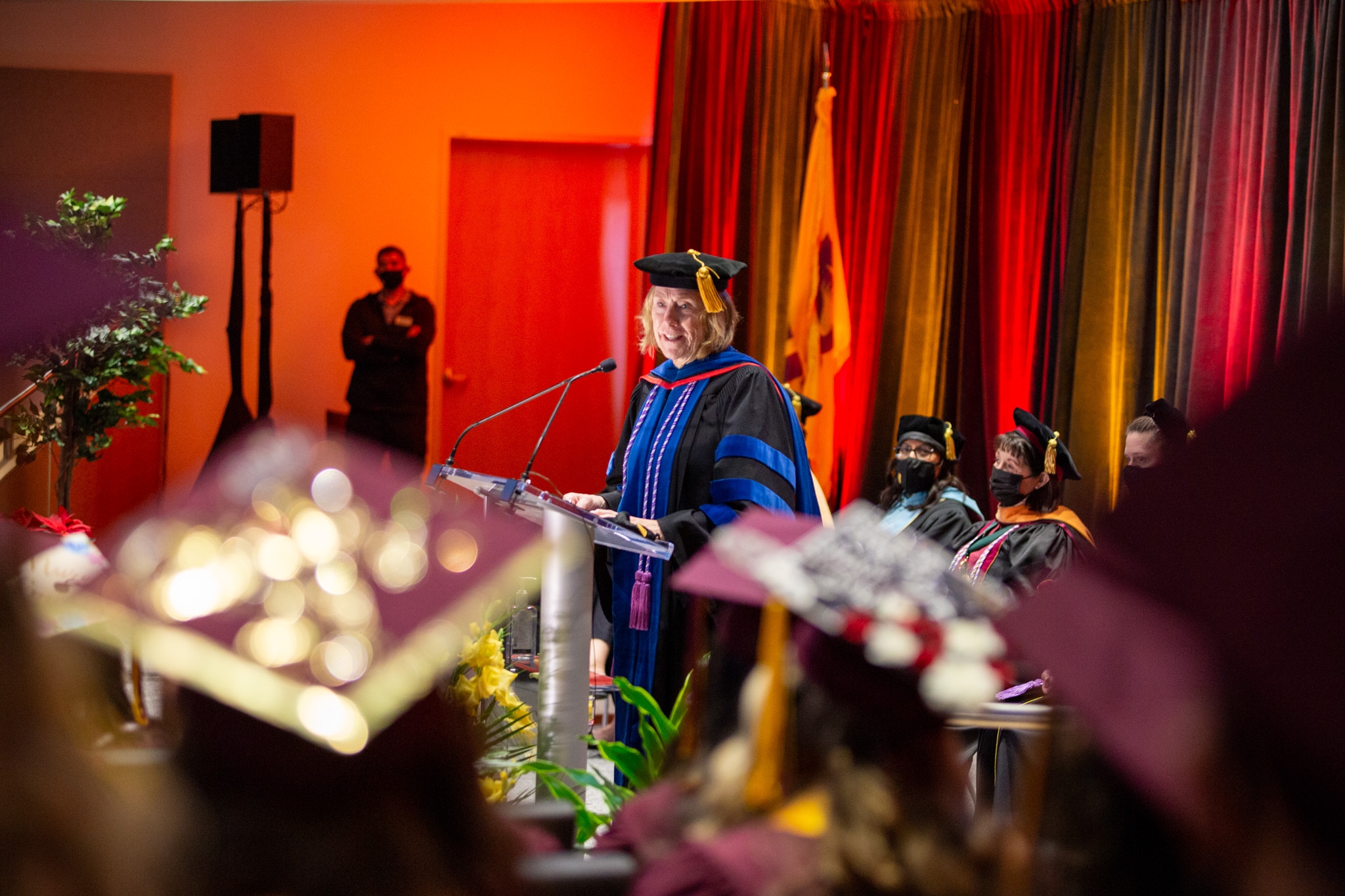 Dean Judith Karshmer addressed graduates during one of the convocation ceremonies on Dec. 15. 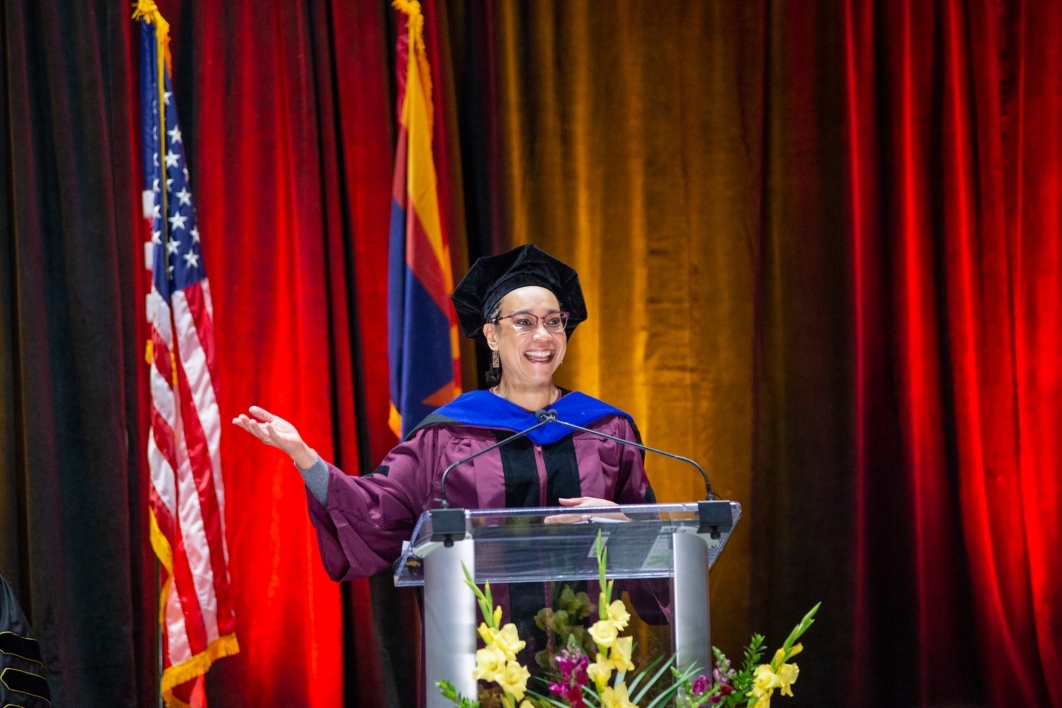 Daniel Kenney was asked to deliver the student speech at the health programs student convocation ceremony.

Each ceremony also had its own student speaker. Daniel Kenney, who earned a Bachelor of Science in health care coordination, was chosen as the speaker for the health programs ceremony.

Kenney shared with the crowd that his path to the podium actually started about 12 years ago when he was nearly killed in a car accident.

The crash left him in a coma with a severe traumatic brain injury. His outlook was grim and he said that most people in that situation never recover.

“I had to relearn how to walk, talk and swallow. I used to choke on water; it was not fun,” he told the attendees.

He spent a lot of time in the hospital, and it was that life-altering experience that sparked his interest in health care.

“I was inspired by the various nurses and therapists who worked tirelessly with me during my hospitalization. It was there and then I decided I wanted to work in the medical field to give back a little of what I was given,” he said.

Kenney put in a lot of hard work and long hours to earn his degree but he also credited the resources of ASU’s Student Accessibility and Inclusive Learning Services and the flexibility and support of Edson College instructors for helping him get to this point.

Kenney concluded his speech by sharing this advice with his fellow graduates: “As we embark into our professions, let us take core concepts such as cultural competence, interprofessional collaboration and patient-centered care, and let it spread like wildfire throughout the medical field.”

He was met with a standing ovation from the visibly moved audience and his fellow graduates.

In addition to the in-person ceremonies, each one was also livestreamed. Replays, including Kenney's speech, are available on the Edson College YouTube channel.

Access to clean water is a dire challenge for one third of the world’s population, including people living in the southwestern United States. Approximately 20% of households in the Navajo Nation lack indoor plumbing, meaning thousands of residents haul water in tanks they fill from a mixture of regulated and unregulated sources. The latter are susceptible to contamination and therefore pose ...

Access to clean water is a dire challenge for one third of the world’s population, including people living in the southwestern United States. Approximately 20% of households in the Navajo Nation lack indoor plumbing, meaning thousands of residents haul water in tanks they fill from a mixture of regulated and unregulated sources. The latter are susceptible to contamination and therefore pose a threat to human health, so more safe water sites are desperately needed.

Toward that end, the CDC Foundation, an independent nonprofit that supports the work of the Centers for Disease Control and Prevention, has awarded $1.8 million through the Arizona State University Foundation to Construction in Indian Country, or CIIC, which is part of the Ira A. Fulton Schools of Engineering at ASU. The funds will be used to install new permanent water loading stations across the Navajo Nation as part of COVID-19 response efforts. 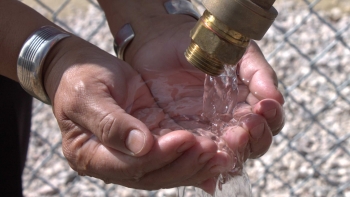 “We started the project in mid-October, and we’re targeting completion by the end of 2022,” said Marcus Denetdale, program manager for CIIC, which operates within ASU’s Del E. Webb School of Construction and supports infrastructure development on tribal land as well as expanded construction management capabilities within Native American communities.

“Right now, we’re collecting data,” he said. “Indian Health Service, which is part of the U.S. Department of Health and Human Services, identified 41 proposed sites for us to consider for these permanent water loading stations. So, we’re looking at the number of homes without piped water in those areas, current water usage levels, local water quality and a lot more.”

When that analysis is complete, Denetdale and others on the project team will submit a report for relevant Navajo Nation authorities and local utilities to consult in deciding where to proceed with the new stations.

“Our goal is eight, but if we can squeeze the budget or if other donors are able to add funding, we could build 10 or maybe 12 new stations in total,” said Denetdale, who is an enrolled member of the Navajo Nation and a doctoral student of civil, environmental and sustainable engineering in the School of Sustainable Engineering and the Built Environment, one of the seven Fulton Schools at ASU.

He explains that each additional permanent water loading station makes a significant impact on the local community. Many people drive 10 or more miles to one of many rudimentary or transitional water points to fill a 250- or 300-gallon tank on their truck or trailer.

“Some of these are very basic pump and garden hose systems,” Denetdale said. “So, our goal with the new stations is to increase pressure and volume in a way that is mindful of current drought conditions and can be supported by the local water tables and utility systems. But we’re also increasing quality of life, which is part of the ASU Charter.”

To further the impact of the project, Denetdale says the team will employ a doctoral student researcher to analyze decisions and outcomes to better inform future infrastructure projects on tribal lands. He says there is very little research in this area, so there is a lot to learn.

“I’m also teaching a new ASU class in the spring semester called Construction Management in Indigenous Communities,” he said. “Depending on the pandemic, it is my is my hope to take students to one of the watering stations after we break ground. But at the very least, we’ll be talking about this work as one of our case studies in class. More firms are becoming involved with tribal projects, so we need more young professionals with knowledge of this sector.”

Denetdale says CIIC designated a Native-owned construction management firm called Kenēw to acquire contractors and direct the actual work in the field. Other partners include water quality engineers from Montana State University and the University of Arizona, as well as Fulton Schools faculty members, including Anthony Lamanna and Treavor Boyer.

“This is a broadly collaborative effort,” Denetdale said. “It’s all hands to the pump.”