An international team of scientists believe they may have found a molecular mechanism behind the extremely rare blood clots linked to adenovirus COVID-19 vaccines.

Scientists led by a team from Arizona State University, Cardiff University and others worked with AstraZeneca to investigate vaccine-induced immune thrombotic thrombocytopenia (VITT), also known as thrombosis with thrombocytopenia syndrome (TTS), a life-threatening condition seen in a very small number of people after receiving the Oxford-AstraZeneca or Johnson & Johnson vaccines. A cloud of platelet factor 4 proteins interacting with the electrostatic surface of the Oxford vaccine, as seen through a computational microscope. Download Full Image

“The mechanism which results in this condition, termed vaccine-induced immune thrombotic thrombocytopenia (VITT), was unknown,” said Abhishek Singharoy, an Arizona State University scientist and corresponding author of the study who teamed up to lead an international effort to tease out the details. So, a team quickly assembled to try to understand the problem more clearly.

Together, they worked to solve the structural biology of the vaccine and see the molecular details that may be at play, utilizing ASU’s new cryo-EM facilities and a state-of-the-art Titan Krios machine at ASU’s Eyring Materials Center at Arizona State University.

The global team used state-of-the-art cryo-EM technology to analyze the AstraZeneca vaccine in minute detail to understand whether the ultra-rare side effect could be linked to the viral vector that is used in many vaccines, including those from Oxford/AstraZeneca and Johnson & Johnson.

Their findings suggest it is the viral vector — in this case, an adenovirus used to shuttle the coronavirus’ genetic material into cells — and the way it binds to platelet factor 4 (PF4) once injected that could be the potential mechanism.

In very rare cases, the scientists suggest, the viral vector may enter the bloodstream and bind to PF4, where the immune system then views this complex as foreign. They believe this misplaced immunity could result in the release of antibodies against PF4, which bind to and activate platelets, causing them to cluster together and triggering blood clots in a very small number of people after the vaccine is administered. 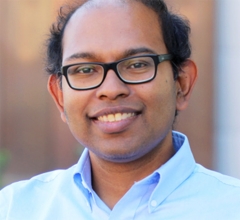 “It’s really critical to fully investigate the vector-host interactions of the vaccine at a mechanistic level,” Singharoy said. “This will assist in understanding both how the vaccine generates immunity, and how it may lead to any rare adverse events, such as VITT.”

Their findings were published Dec. 1 in the international journal Science Advances.

“VITT only happens in extremely rare cases because a chain of complex events needs to take place to trigger this ultra-rare side effect,” said Professor Alan Parker, an expert in the use of adenoviruses for medical applications from Cardiff University’s School of Medicine. “Our data confirms PF4 can bind to adenoviruses, an important step in unraveling the mechanism underlying VITT. Establishing a mechanism could help to prevent and treat this disorder.

“We hope our findings can be used to better understand the rare side effects of these new vaccines — and potentially to design new and improved vaccines to turn the tide on this global pandemic.”

Both the AstraZeneca and Johnson & Johnson vaccines use an adenovirus to carry spike proteins from the coronavirus into people to trigger a protective immune response.

When both vaccines showed the ultra-rare side effect of VITT, scientists wondered whether the viral vector had some part to play. Another important clue was that neither the Moderna nor Pfizer vaccines, made from an entirely different technology called mRNA vaccines, showed this effect.

The team used the cryo-EM technology to flash-freeze preparations of ChAdOx1, the adenovirus used in the AstraZeneca vaccine, and bombard them with electrons to produce microscopic images of the vaccine components. A 3D structure of the viral capsid can be found in the Protein Database.

They were then able to look in atomic level at the structure of the outer protein cage of the virus — the viral capsid — and other critical proteins that allow entry of the virus into the cell.

In particular, the team outlined the details for the structure and receptor of ChAdOx1, which is adapted from chimpanzee adenovirus Y25, and how it interacts with PF4. They believe it is this specific interaction — and how it is then presented to the immune system — that could prompt the body’s own defenses to view it as foreign and release antibodies against this self-protein.

The research team also used the computational models of Singharoy to show that one of the ways the two molecules tightly bind is via electrostatic interactions. The group showed that ChAdOx1 is mostly electronegative. This makes the protein act like the negative end of a battery terminal, and could attract other positively charged molecules to its surface.

“We found that ChAdOx1 has a strong negative charge,” said Alexander Baker, first author on the study. “This means the viral vector can act like a magnet and attract proteins with the opposite, positive charge, like PF4.”

Baker is a member of ASU’s Biodesign Center for Applied Structural Discovery and an honorary research fellow at Cardiff University School of Medicine.

“We then found that PF4 is just the right size and shape that when it gets close to ChAdOx1, it could bind in between the negatively charged parts of ChAdOx1’s surface, called hexons,” he said.

The research team members are hopeful that armed with a better understanding of what may be causing rare VITT, they can provide further insights into how vaccines and other therapies, which rely on the same technology, might be altered in the development of next-generation vaccines and therapies.

“With a better understanding of the mechanism by which PF4 and adenoviruses interact, there is an opportunity to engineer the shell of the vaccine, the capsid, to prevent this interaction with PF4. Modifying ChAdOx1 to reduce the negative charge may reduce the chance of causing thrombosis with thrombocytopenia syndrome,” Baker said.

The team likens it to the “two birds, one stone” effect. The key contacts of individual amino acids that are essential to the capsid protein’s proteins interaction with PF4 can removed or substituted.

“The modification of the ChAdOx1 hexons to reduce their electronegativity may solve two problems simultaneously: reduce the propensity to cause VITT to even lower levels, and reduce the levels of pre-existing immunity, thus helping to maximize the opportunity to induce robust immune responses,” Singharoy said.

Both the U.K.-based Medicines and Healthcare products Regulatory Agency (MHRA) and the Centers for Disease Control and Prevention (CDC) in the U.S. continue to advise that vaccination is the best way to protect people from COVID-19 and the benefits far outweigh the risk of any known side effects. 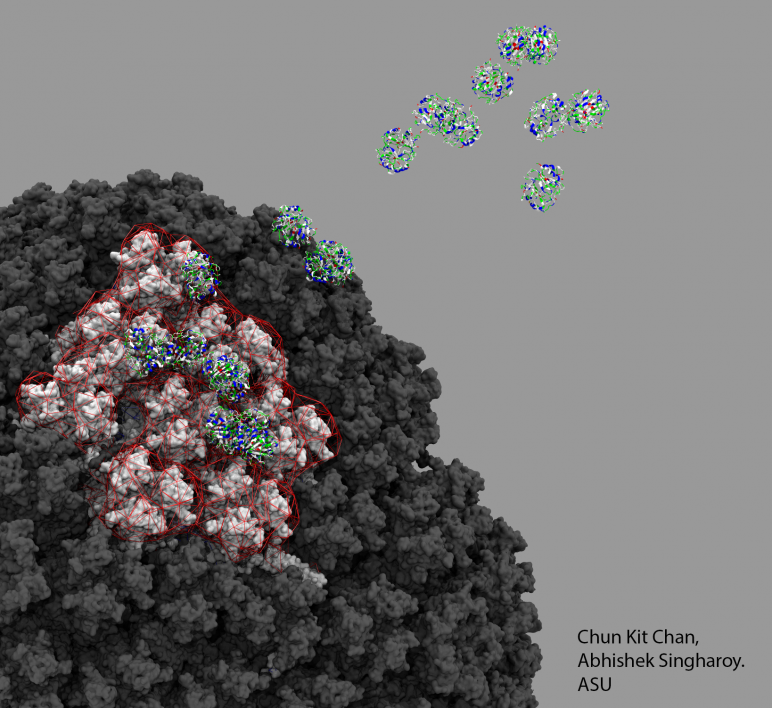 A cloud of platelet factor 4 proteins interacts with the electrostatic surface of the Oxford vaccine, as seen through the computational microscope. 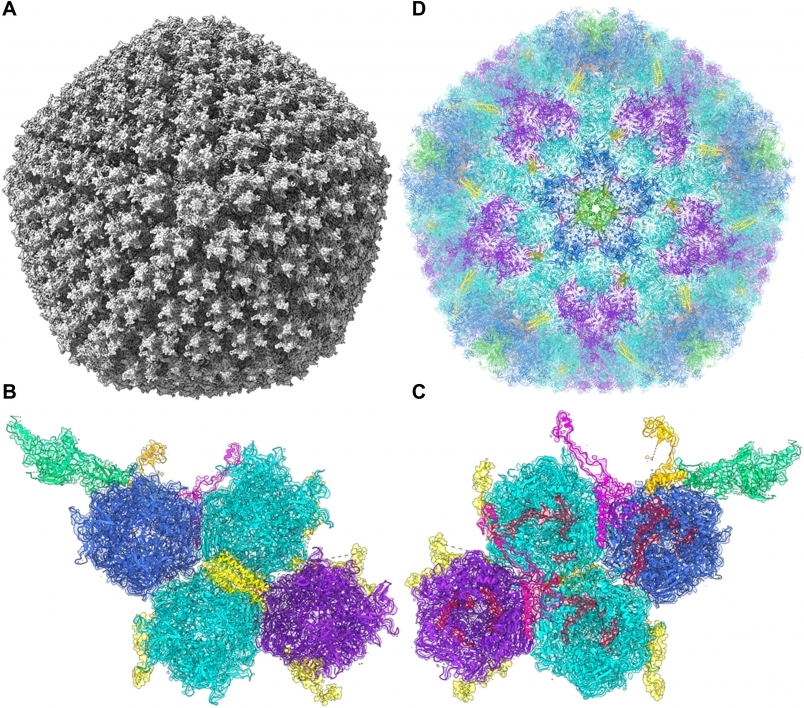 The capsid structure of the ChAdOx1 viral vector, revealed by cryo-EM data, shows an archetypical adenovirus icosahedron (A). Further details show asymmetric units, seen from the capsid exterior (B) and interior (C). The reconstruction of a full ChAdOx1 capsid model (D).

This fall, Arizona State University’s Sun Devil Battalion participated in the Ranger Challenge Competition, a two-round varsity sport where Army ROTC teams from across the country compete in events that test mental and physical toughness. The team placed first in the regional round and fifth in the overall competition.“I am extremely proud of the way the team came together and executed. From t...

This fall, Arizona State University’s Sun Devil Battalion participated in the Ranger Challenge Competition, a two-round varsity sport where Army ROTC teams from across the country compete in events that test mental and physical toughness. The team placed first in the regional round and fifth in the overall competition.

“I am extremely proud of the way the team came together and executed. From the beginning this team had a mindset that they would go to this event and win, and they went out and did it,” said Capt. Tyler Alavekios, an assistant professor in the Department of Military Sciences. “Nearly all the members had never competed before, so no one really knew what to expect from the event. The win validated the focus and effort our team has put into not only training the team but into how we train cadets.” 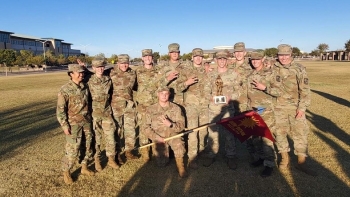 The challenges the cadets participated in included basic rifle marksmanship, an Army physical fitness test, a written navigation test, day and night orienteering and a grenade assault course. Each team that participates is awarded points based on how well they perform in each event.

The first round of the Ranger Challenge took place at Fort Bliss in Texas from Oct. 22–23. The Sun Devil Battalion was one of eight teams competing from Arizona, New Mexico and Texas. In this round, the Sun Devil Battalion placed first and was one of two teams from the region to move on to the second and final round. This was the first regional competition win for the team since 2009.

The final round was held at Camp Gruber in Oklahoma from Nov. 5–7. There, the Sun Devil Battalion placed fifth among 10 teams from Arkansas, Arizona, Colorado, New Mexico, Oklahoma, Texas, Utah and Wyoming.

The Sun Devil Battalion’s Ranger Challenge team was made up of seven students from ASU and four from Grand Canyon University.

“In less than a week, the team quickly developed trust, confidence and cohesion to excel during their competition during physical and marksmanship events,” said Lt. Col. Erich Schneider, a professor in the Department of Military Sciences for ASU and GCU Army ROTC.

Jack Frus, a third-year student double-majoring in civic and economic thought and leadership, and political science, with minors in history and military leadership, was part of the Sun Devil Battalion’s Ranger Challenge team and has previously participated in the Ranger Challenge. 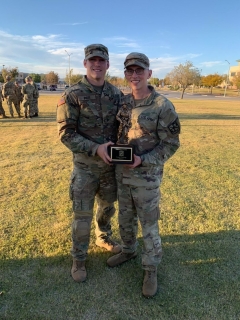 He said this year's competition was more than just a physical and mental challenge for him.

“Participating in the Ranger Challenge allowed me more time to hone in on my skills as a soldier and put them to the test. It also allowed me to build better camaraderie and trust with my fellow cadets,” Frus said. “My favorite part of the Ranger Challenge was the shared experience between myself and the other cadets in the challenge. We built strong bonds through intense training and rigorous competitions. In stressful situations, trusting one another is the key to success when under extreme pressure.”

Frus, who hopes to serve in the Army Special Forces and eventually hold a leadership position within the government, said participating in the Ranger Challenge has helped prepare him for his future.

The goals of the Ranger Challenge center on developing leaders while fostering teamwork, a sentiment that is similarly at the heart of ASU’s Army ROTC program.

“By having cadets participate in the Ranger Challenge, we increase our ability to generate quality leaders of character for our university, community, state and nation,” Schneider said. “I am confident that our cadets built trust and confidence in one another that will serve as the foundation for many more competitive teams to come in the future of the Sun Devil Battalion.”