Shannon Sons dreams of working as writer, producer and showrunner in the entertainment industry, but she wants to do it with purpose. 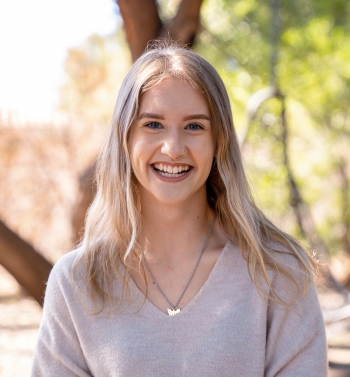 “Peter Murrieta is a professor at the film school that not only has taught me extremely valuable lessons about screenwriting and filmmaking but also about how to pursue your career and life with a purpose,” said Sons, who will graduate this December with a BA in film and media production, with a concentration in producing from The Sidney Poitier New American Film School. “His words of wisdom have helped me mold my own purpose as I move into the industry, to develop and produce uplifting stories from underrepresented communities on screen.”

From short stories and poetry to screenplays, Sons said she has been writing and sharing stories her whole life.

She said during her time at ASU, Murrieta helped her realize that “whose stories we tell and create is important.”

“He is a champion for the LatinxA gender-neutral American English term sometimes used to refer to people of Latin American cultural or ethnic identity in the United States. community and continues to write and produce stories that show the daily joy and love of being Latinx,” she said. “It inspired me, a white woman, to go into the industry with a purpose bigger than myself … I want to be a part of a revolution in Hollywood, a changing of the narrative to be about the happiness and success of people from all walks of life rather than solely one skin tone and one language.”

Answer: My “aha” moment for when I knew I wanted to study film and media production was during my final year of high school. I spent my junior year pestering the principal to greenlight my production of a schoolwide lip dub — better known as a music video with a mashup of popular songs. On the first day of my senior year I was pulled into his office where he told me he wanted to make the lip dub a reality. I spent three months working on pre-production by myself. I created the mashup of songs, detailed the route around campus (where) we would record, made instructional videos for both students and staff to know how to prepare themselves for the day and much more. When the day of production finally came around, I remember feeling like everything I had done leading up to that moment was rewarded. It was the first time I was able to see a production I put together leave a lasting positive impact on all those who were a part of it. I will never forget the feeling I received when this large-scale project I had been working on for weeks finally came together, it felt like magic and I knew I had to pursue producing in college.


Q: What’s something you learned while at ASU — in the classroom or otherwise — that surprised you or changed your perspective?

A: The biggest takeaway I have from my time at ASU is the importance of a team. During my freshman year of college, I thought filmmaking was something that could be executed to a high standard by yourself. Yet, my courses at ASU challenged that philosophy and proved me wrong. Throughout the past year and a half, I have been working closely with a small team of student filmmakers to create our senior capstone films. This experience has completely changed my perspective on filmmaking and allowed me to realize that when you have a team of talented individuals who know their specific role and can execute their role at a proficient level, that is when the magic happens.

A: I chose ASU because of a few factors such as distance from home, scholarship opportunity and their reputable film program. But I think the moment I knew in both my heart and soul (that) this is where I was meant to be is when I came to the Tempe campus for my college orientation. I remember seeing the ASU charter inscribed in stone with the words, “measured not by whom it excludes, but by whom it includes and how they succeed;” and from then on, Tempe has felt like home.

A: For the individuals still in school, my biggest piece of advice is to let your college experience run at its own pace and let go of comparison. Do not let yourself get swallowed by the suffering of competing against your peers. Of course you are in college courses to learn about your choice of study, but also take time to learn about yourself and what you genuinely enjoy in life without the influence of others. College is a strange time of growth and realization, so please know that it is more than okay to switch majors halfway through and it is perfectly normal to not know what you want to do after graduation. Take college day by day without thinking too much into the future, and use the time that you do have to grow closer to yourself before heading out into the “real world.”

A: My favorite spot on campus for anything and everything will always be the Memorial Union (on the Tempe campus). Some of my fondest memories from college come from sitting in the Starbucks to do my homework, meeting with groupmates in Sparky’s Den and eating with my coworkers in Pitchforks. I spent so much time in the MU thinking about my college experience and reflecting on growth each year. As the walls stayed the same, I changed significantly inside them.


Q: What are your plans after graduation?

A: After graduation this December, I hope to move to Los Angeles, California, sometime in 2022 when a job opportunity I have been pursuing becomes available. I am hoping to start my career as a personal assistant to a reputable television producer/writer.


Q: If someone gave you $40 million to solve one problem on our planet, what would you tackle?

A: I want to acknowledge that $40 million is not enough money to tackle any problem our planet currently faces, but I would ultimately put the money towards an organization working towards reforestation efforts, such as Trees for the Future, One Tree Planted or Plant With a Purpose. One-third of the world’s forests have been lost, but humanity needs trees for survival. Trees help clean the air we breathe, filter the water we drink, brings nutrients to our soil and even improve mental health. Deforestation is a serious environmental issue that affects many aspects of our lives, and I think it is important we address the issue sooner rather than too late.