Editor’s note: This story is featured in the 2021 year in review.Students find their way to Arizona State University at many points in their lives — straight after high school, transferring from community college or mid-career.One group of students is pursuing a degree at ASU in lieu of attending high school. The university has 45 students who are 16 or younger attending on campus or through...

Doubleheader Dub for Water Polo Highlighted by Upset Over No. 6 Michigan 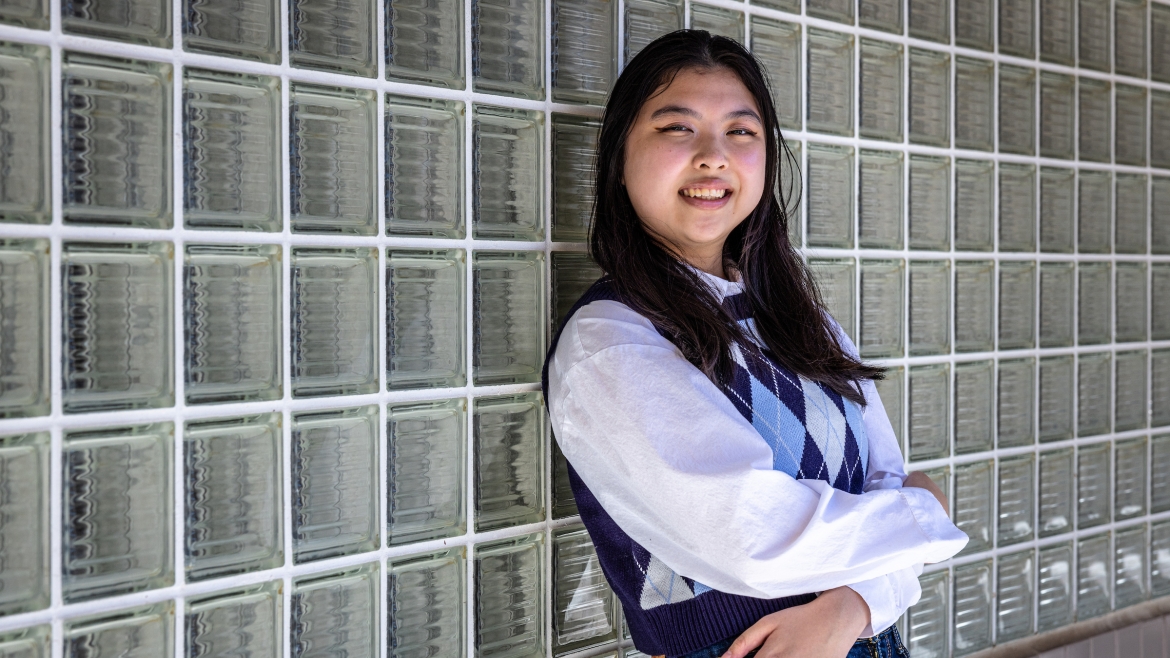 45 students 16 or younger are pursuing degrees; here are some of their stories

Students find their way to Arizona State University at many points in their lives — straight after high school, transferring from community college or mid-career.

One group of students is pursuing a degree at ASU in lieu of attending high school. The university has 45 students who are 16 or younger attending on campus or through ASU Online.

Here are some of their stories:

Valerie Tan, who is 15 and a student at the West campus, is the second in her family to attend ASU. Her mother, Daphnie Chong, also graduated from ASU.

Chong went to ASU 20 years ago. Her husband, who is in the Singaporean air force, was posted at Luke Air Force Base as part of a partnership program. The family returned to Singapore after Chong graduated with a degree in communications, but they later returned to Arizona, where Chong had Valerie. In 2019, they came back again.

“We were deciding between going to college and going to high school because I was 13 at the time,” Tan said. “I decided to try out high school first to see how I liked it.”

After a few months, she decided high school wasn’t for her. The education system in Singapore is very advanced.

“She would say, ‘I learned this back home,’” Chong said. “There was nothing new, especially in the key subject areas of math, English and science.”

But she did enjoy her elective classes of speech and debate and childhood education. Schools in Singapore don’t offer electives.

So in 2020, Tan started classes at Estrella Mountain Community College.

“That was very different from high school, and I really liked the independent aspect of it, where you take responsibility for your own classes and grades,” Tan said. “I felt like I was able to control what I was doing and have more ownership of my work.”

Tan always intended to transfer to ASU, which she did this year, majoring in psychology.

“It’s always been something that I’ve had an interest in, since I was young,” she said.

After graduating with a psychology degree from ASU, Valerie would like to return to Singapore for graduate school.

“I would like to be a psychologist, and it’s something I’m working towards,” she said. “It’s an occupation that’s rising in popularity and is in need as well.”

Chong said that the practice of psychology is not as prominent in Asia as in Western societies.

“She would like to combat that stigma that it’s bad to talk about your emotions and how you’re feeling,” she said.

Chong, who drops off and picks up Tan at the campus, was a bit concerned about her daughter going to a big university.

“We weren’t sure if she would fit in, being in a totally different culture,” she said. “She’s thrown into a new country and a new environment that has less Asian faces. So we said, ‘Just go with the flow.’”

“So far it’s been great,” Tan said. “If the other students do know that I’m younger, they don’t look down on me in any way. They always value what I have to say and treat me as a regular student.

“At the West campus, there are students of many different ages. I have a classmate who’s 41.”

Tan is in Barrett, The Honors College, which has been a great way to attend events and meet other students.

Chong says her daughter is thriving at ASU because she’s “an old soul.”

“Since she was very young she’s had this very discerning attitude in her,” she said. “She will tell you what’s right, what’s wrong and what she likes and doesn’t like. 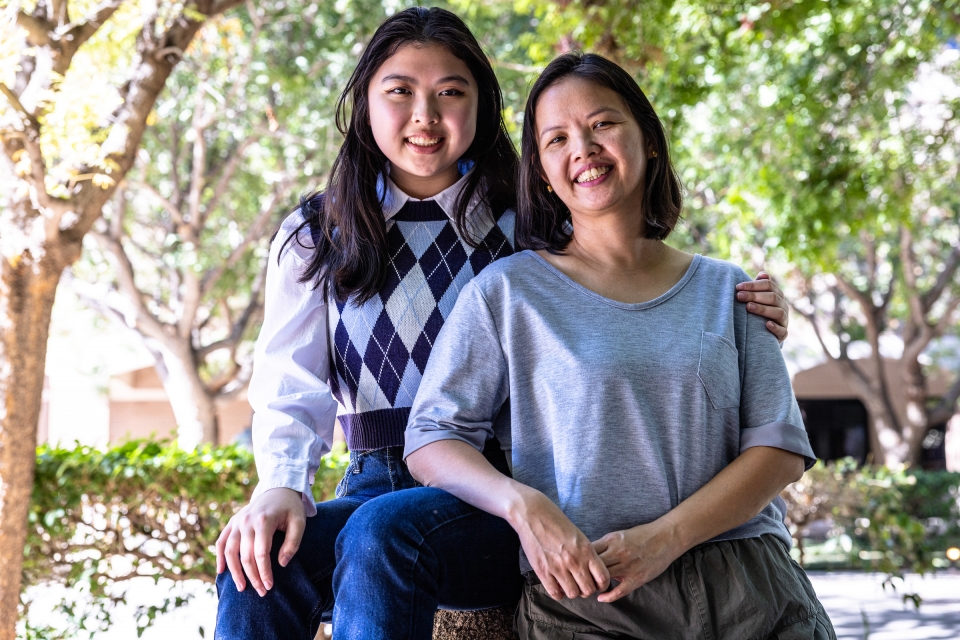 Fifteen-year-old Valerie Tan (left) and her mother, Daphnie Chong, on the West campus of ASU, where Tan is majoring in psychology. Chong is an ASU alumna, graduating with a degree in communications two decades ago. Photo by Charlie Leight/ASU News

Christian Armanti, who is 13, started taking classes at Mesa Community College when he was 10.

“I started in regular elementary school with pre-K, kindergarten, first grade,” he said. “I skipped third grade and went to fourth, but the exams were already showing that I was ready for college.”

Armanti’s mother then home-schooled him before he started at Mesa Community College, where he earned an associate degree in applied science.

He started at ASU in 2020, when learning was remote due to the pandemic, so this semester is his first on the Tempe campus, where he’s majoring in communication with a minor in music performance.

“The first week was a little difficult because of my age, when everyone was staring,” he said. “But now my classmates are getting used to it, and I’ve had a really good experience.”

Armanti has found a creative outlet by participating in the mariachi ensemble at ASU.

“It’s a lot of fun to be with with other people who have more knowledge than I do, music-wise,” he said. “It will help me grow as a musician.”

Music has helped him create a balance.

Armanti’s parents have been big supporters.

“My mom takes me to campus, and both parents have helped me decide my class schedule,” he said. “They’ve really supported me in everything.”

Armanti’s ultimate goal is to become a neurosurgeon.

What would he tell other young teenagers who are considering skipping high school and going straight to college?

“I would tell them they have to be very focused on their goal and have to know what they want to do and have a plan to achieve that goal,” he said. “You have to keep a balance and an organized schedule.”

A career in space 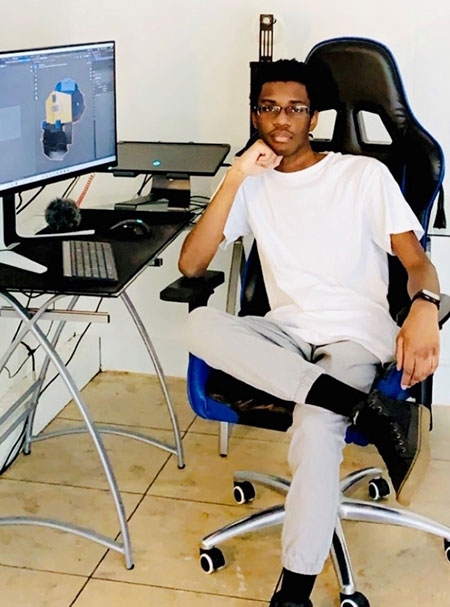 Fifteen-year-old Isaiah Watson, who lives in Florida, is an ASU Online student and wants to start a space-transportation business.

Isaiah Watson hopes to have his own company some day, and he is majoring in global logistics management as an ASU Online student.

Watson, who lives in Niceville, Florida, with his mother and grandmother, started at ASU Online over the summer as a 15-year-old.

“There really wasn’t any need to skip grades,” he said. “I’ve been home-schooled since the fourth grade and had met all of Florida’s requirements for high school graduation by the age of 14.”

Because he wants his business to be related to space exploration and transportation, he wants to switch his major to software engineering.

“In my free time, I like to code and create games related to transportation, rocketry and mechanics,” he said. “I also like to study these subjects outside of the classroom.”

Watson said that as an online student, many people don’t realize he’s 15, but when he has done group projects on Zoom, “everyone I’ve been in class with who finds out I’m a young student is supportive.”

Like the other young students, he gets family support.

“My mother is certified as a life and wellness coach and has always helped me with time management even before I was accepted into ASU,” he said.

“We assess which courses I need to take and schedule my time before every semester. My academic advising team and success coaches these past two semesters have also been a big help.”

Watson had practical advice for other young teens who want to pursue a degree:

“If you want to pursue a major that has higher admission requirements, look into AP exams and taking CLEP tests, whether in home school or high school,” he said.

“Passing those tests can either replace college courses or count as prerequisites, which allows you to earn your degree faster.”

Top image: Fifteen-year-old third-year psychology student Valerie Tan is from Singapore and takes courses at both the West and Tempe campuses. Photo by Charlie Leight/ASU News