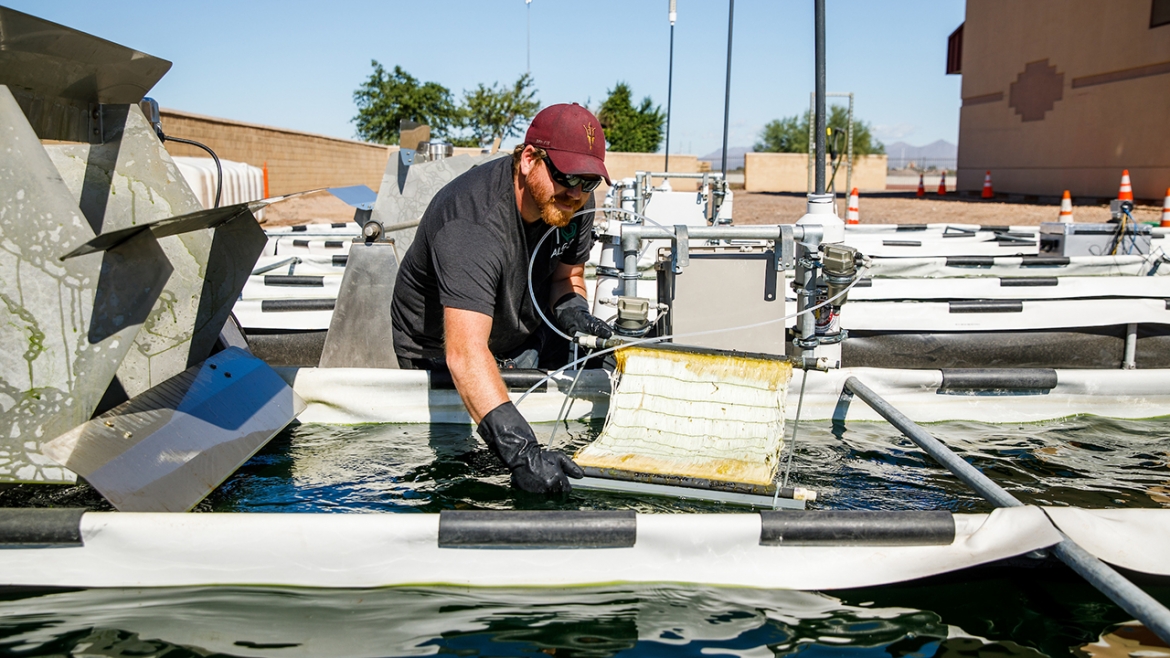 Rittmann is a researcher at Arizona State University who is leading a project using the greenhouse gases produced through wastewater treatment to generate electricity, create biofuel and possibly even make ice cream — all thanks to microalgae.

The three-year project, funded by the Department of Energy, is culminating in a six-week trial with the city of Mesa’s Northwest Water Reclamation Plant in Sloan Park near the Salt River.

“The city of Mesa has anaerobic digesters, is located close to ASU, is always eager to try out advanced technologies, and has been a great research and development partner with our center for some years,” says Rittmann, a Regents Professor in the School of Sustainable Engineering and the Built Environment and director of the Swette Center for Environmental Biotechnology at the Biodesign Institute.

Rittmann has been involved in research using gas-transfer membranes — the basis for this project — for 20 years and has been using this technology with microalgae for over a decade. By pairing up with the city and getting access to their anaerobic digesters, which treat wastewater, his team has been able to scale the project up massively.

Not only does wastewater smell bad, it’s also a major problem for the environment. Wastewater treatment produces biogas made up of methane and carbon dioxide (CO2), the biggest contributors to climate change.

Typically, wastewater treatment facilities burn the biogases they produce. This eliminates the methane, which converts to carbon dioxide in the burning process.

“So now you're just emitting CO2. Of course, I think we're all familiar now with CO2 being a problem,” says Justin Flory, an associate director of research in ASU’s Center for Negative Carbon Emissions and project manager of the trial. “It's less of a problem than methane, but it's still a problem.”

People are not going to stop producing wastewater. In fact, as the population grows, we’re probably only going to produce more of it. But the very problem that wastewater treatment creates could provide value instead.

This project proposes a better solution with no burning required. The researchersThe ASU team also includes Rosa Krajmalnik-Brown, Yen-Jung Lai, Michelle Young, Zoe Frias, John McGowen, Robert Stirling and Jason Quinn, with the added support of Carole Flores. Several city of Mesa team members were instrumental in making this possible, including Tom Sheber, Roy Van Leeuwen and Jesus Mendez. take the carbon dioxide produced by treating wastewater and feed it to microalgae, which can then be turned into a variety of products. The process also takes the methane produced and generates purer biomethane, which is a high-value product.

“It’s a great opportunity to partner with ASU to develop technologies that will help us meet our sustainability goals while ASU meets their goals of continuing to lead the world in innovation,” says Scott Bouchie, the city of Mesa’s director of environmental management and sustainability.

If the heart of this project is to convert greenhouse gases into useful products, microalgae is the stomach.

The water reclamation facility captures and compresses those gases for storage in tanks. Normally it is burned to generate heat, which emits carbon dioxide into the atmosphere. For the ASU project, they deliver some of that biogas to three, 270-square-foot algae ponds located near the digesters.

The ponds were designed by staff at ASU’s Arizona Center for Algae Technology and Innovation and fabricated by students with the assistance of Everett Eustance, an assistant research scientist in the Swette Center who is also the lead researcher running the cultivation trial.

The biogas is delivered directly through thin, hollow fibers placed directly in the ponds. The carbon dioxide diffuses through the membranes of the fibers into the water, where the microalgae consume it for their photosynthetic growth.

“The CO2 content of the atmosphere is too low to support high productivity, which means that delivering concentrated CO2 is one key aspect of increasing microalgae productivity and lowering the costs of the products derived from the microalgae,” Eustance says.

What happens to the methane? Most of it goes out the end of the fibers, where it is captured for later use. Because almost all the carbon dioxide has been removed, the exiting gas is a purer form of biomethane.

“The city of Mesa just passed a council-approved Climate Action Plan that has aspirational goals of carbon neutrality, 100% renewable energy and waste diversion of 90% by 2050,” Bouchie says. “The project we’re working on today will help us take a step towards those goals.” Biogas captured from wastewater treatment is delivered to these three ponds, where it is used to grow algae. The ponds were designed at ASU's Arizona Center for Algae Technology and Innovation. Photo by Andy DeLisle.

The whole process keeps the biogases out of the atmosphere. But what can be done with the end products?

“That enriched methane can be used to make electricity or it can run your gas stove in your house or fuel those natural gas buses that run around town,” Flory says.

The microalgae grown from the CO2 can be used in a wide variety of products.

“We can convert that biomass into many different things,” Flory says. “Some microalgae are high in protein and omega three fatty acids and can be used to feed animals or fish. There are even compounds in microalgae that we use today in ice cream.”

Microalgae can also be converted into biofuels.

“Think about how fossil fuels are created — heat and pressure underground over time converts old organic material, like plants, into fossil fuels. That takes millions or thousands of years, but there is technology being developed that can do it in minutes,” Flory says.

The microalgae can be mashed down into a slurry and be pressured cooked until it becomes a crude biofuel. Biofuels are non-toxic and a renewable source of energy. They also create a closed cycle — the biofuel will still release some carbon dioxide, but it can be eaten by new microalgae grown to make more biofuel.

The city of Mesa is enthusiastic about the positive financial effects this project could have on their water reclamation facilities.

“We are grateful to have ASU’s involvement in this research project,” said Mesa City Councilmember Mark Freeman. “The possibility of reducing the plant’s operating costs by using biogas to generate electricity is an exciting prospect.”

Going from a lab to the real world

The researchers know that all these things are possible in theory, but can they work in practice? Scaling up from a lab using synthetic gases to a working treatment plant presents a less consistent — but more realistic — environment. Partnering with the city of Mesa is monumentally important to the scientific process, helping to identify real-world challenges and how to overcome them.

Since this process relies on the effective growth of microalgae, the team needs to keep the same things in mind that the average plant-parent does at home. Plants need sun, water and the right climate. Algae are no different, and inconsistencies and other issues with these three things can affect how well the algae grows.

In general, Arizona is a good location because of how much sunlight is available year-round. Even so, sunlight brings its own problems.

“Sunlight needs to reach the bottom of the pond to be effective. If you have a very dense culture, that sunlight can’t penetrate it,” Flory says.

This puts a limit on the amount of microalgae that can be grown in each pond. To get around this, the team has determined the optimal density for the microalgae that will still allow a sufficient amount of it to be grown.

“Water is a rare resource in the desert, so that’s another challenge we face,” Flory says.

Fortunately, at a wastewater reclamation plant, water is openly available, and that water can’t be used for drinking.

Weather could further affect the microalgae’s growth. In a lab, it’s relatively easy to have a consistent environment, but outdoor weather naturally changes.

“Algae do well in warm climates. As it starts to cool down here, the microalgae will grow slower and won’t take up as much CO2,” Flory says.

As we edge into wintertime, the impact of the project and the products generated may slow down. Although cold weather could mean less carbon dioxide is consumed, there is still an overall decrease from what would normally be released.

To address this concern, the team has run the trial through the end of November, utilizing strains of algae that can thrive in cooler weather.

After this project ends, the team is hoping to conduct another trial with the city of Mesa early next year.

The next time around, the team plans to include another waste stream that the wastewater treatment process generates. This waste stream contains leftover liquid from the anaerobic digestors that would provide necessary nutrients like nitrogen and phosphorus for the microalgae to grow — and it can be pumped directly into the microalgae ponds.

“It would be the whole shebang. We’d be getting our nutrients from the wastewater and the CO2​​​​​​​​​​​​​​ to feed the microalgae,” Flory says.

This would mean the project would truly be a closed cycle. Essentially every waste produced by the treatment process would be used up.

“Innovative programs like this one could create new opportunities to improve Mesa operations on behalf of our residents,” says Mesa Mayor John Giles. “We’re really proud to be working with them on this research project, which is also another positive step toward our climate action plan goals.”

This trial is a good jumping off point to show other cities that there’s a solution for cutting back on greenhouse gas emissions by wastewater treatment facilities.

“Residents of Arizona see a need to really change the way we operate today,” Bouchie says. “It seems like there’s a lot of things we call waste that truly are not waste — they're resources.”

Heavyweight picked up a pair of pins enroute to 4 victories Saturday in Wyoming ...