Iman Isanovic was named to the All-Pac-12 Team and Marta Levinska earned an honorable mention.

Editor's note: This story is part of a series of profiles of notable fall 2021 graduates.After earning dual bachelor’s degrees from Arizona State University and working for two years in program management post-graduation, Abbey Hawthorne knew she wanted to return to ASU to pursue her JD from the Sandra Day O’Connor College of Law.Focusing on international law, business law and alternative...

After earning dual bachelor’s degrees from Arizona State University and working for two years in program management post-graduation, Abbey Hawthorne knew she wanted to return to ASU to pursue her JD from the Sandra Day O’Connor College of Law. 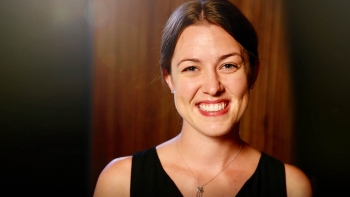 For ASU Law JD grad Abbey Hawthorne, being a part of the college's Vis Moot court team provided the most defining moments in her legal studies. She now looks forward to a career in international arbitration. Download Full Image

Focusing on international law, business law and alternative dispute resolution, Hawthorne became an active member of ASU Law’s Willem C. Vis International Commercial Arbitration Moot (Vis Moot) court team – a role she says provided the most defining moments of her legal studies. She was recognized as the top oralist at the University of San Diego Vis International Commercial Arbitration pre-moot event and one of the top 32 oralists globally at the Vis Moot Vienna competition during her final year at ASU Law.

“Though time intensive and challenging, my role on the Vis Moot team helped grow my advocacy and legal research skills in a way that was fun, interesting and will surely pay off in my career,” said Hawthorne, who is graduating this fall and being recognized for her advocacy skills as one of 10 ASU Law students in her class honored with The Order of Barristers.

Hawthorne, who holds bachelor’s degrees in global studies and sociology as well as certificates in international studies, and religion and conflict, says she was able to get the most out of her JD education thanks to the flexibility and opportunities offered at ASU Law.

She was also able to pursue her passions by studying abroad twice during law school: a summer studying European Union law and policy at ASU Law’s partner program in Prato, Italy, and a semester in Melbourne, Australia, working on an independent study paper examining female representation on the federal courts of Australia and the U.S.

“When discussing my non-traditional law school path with ASU Law professors and administration, the answer to my many questions was never ‘no’ – it was: ‘If you’re willing to put in the effort, we can find a way to make that work,’” Hawthorne said.

“I learned a lot – both in terms of academic topics and life wisdom – from too many amazing professors to name them all, but two of my most impactful professors and mentors were Dean (Diana) Bowman and Professor (Art) Hinshaw,” added Hawthorne, crediting Hinshaw for convincing her to go to law school in the first place.

Hawthorne served as a U.S. Department of State Title VIII fellow studying the Bosnian, Croatian and Serbian language and culture. Having completed the fellowship, she has turned her attention to preparing for the bar exam and starting her legal career.