This year, NASA is observing the 20th anniversary of the 2001 Mars Odyssey orbiter, the longest-lived spacecraft at the Red Planet; and a mission that has helped locate water ice, find landing sites and study Mars’ mysterious moons. The spacecraft launched on April 7, 2001, and arrived at the Red Planet on Oct. 24, 2001.

One of the scientific instruments onboard Odyssey is called the Thermal Emission Imaging System, or THEMIS for short, which is led by Regents Professor Philip Christensen of Arizona State University's School of Earth and Space Exploration. THEMIS is a dual camera system that takes both visual and infrared images. The infrared camera allows scientists to measure the surface temperature day and night and determine what physical materials exist on Mars, such as rock, sand or dust. 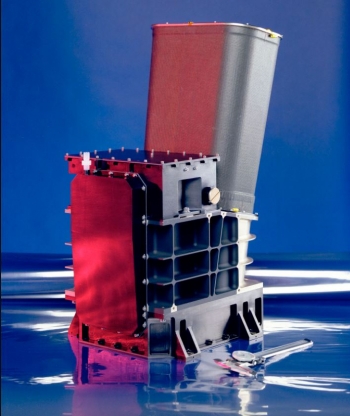 Twenty years ago this October, Christensen and his team, including lead engineer Greg Mehall, acquired the first thermal infrared image of Mars from the THEMIS instrument and have continued to post an “Image of the Day” ever since. In that time, they have collected more than a million images of Mars and provided unique views of Mars’ moons, Phobos and Deimos. Collectively, these images have led to complete global maps of Mars and allowed scientists to chart valley networks and craters; map water ice; spot sandstone, iron-rich volcanic rocks and clays — and ultimately lend deeper insight to Mars’ story.

“THEMIS has been the most enjoyable project I’ve worked on,” Christensen said. “The very first nighttime temperature image we took revealed a surface that was very different from what we expected. What we discovered is that Mars is very diverse and variable, which indicates that a wide range of processes — wind, water, ice and lava — have shaped the surface over millions of years. Twenty years later and we continue to be surprised by what we see in the THEMIS images.”

To commemorate this historic 20th anniversary, the ASU THEMIS team, including mission planners Jonathon Hill and Kelly Bender, has compiled commemorative images from the instrument taken 20 years after the arrival of the spacecraft at Mars. The images feature craters, impact basins, valleys and canyons taken with the visual camera and infrared in both day and nighttime. Additional images are available on the THEMIS Flickr account. THEMIS images below are credited as follows: NASA/JPL-Caltech/Arizona State University. 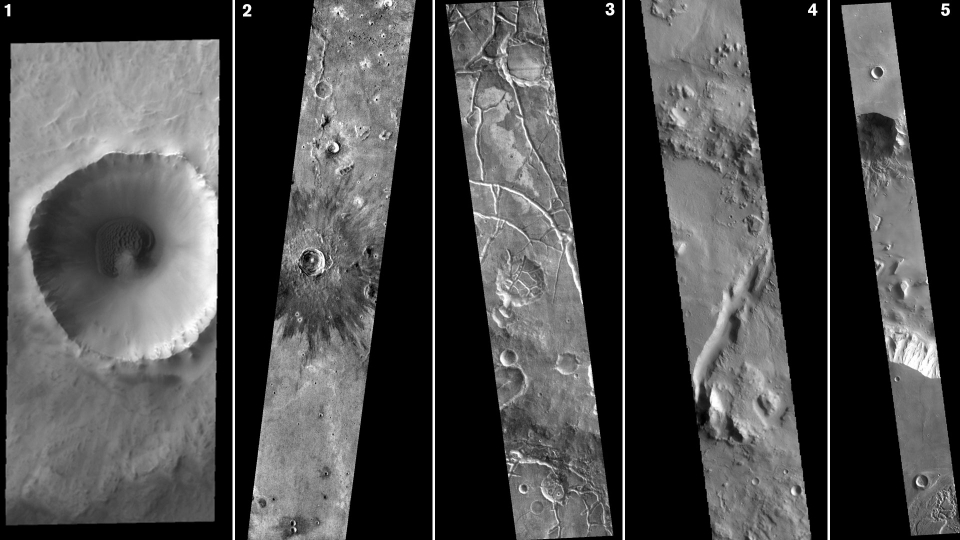 1. This first visual image from THEMIS shows an unnamed crater in the vast lowland plains of the northern hemisphere of Mars. A sand sheet with surface dunes surrounds part of the crater's central peak. This impact crater is bowl-shaped with steep sides, indicating that it is relatively young. Sand has begun to accumulate, blown in by the wind. With the passage of time, and the influx of materials, crater floors tend to fill in and flatten.

2. This second image features a nighttime infrared image from THEMIS showing part of the southeastern margin of Chryse Planitia, thought to be an ancient impact basin. At the center of the image is an impact crater surrounded by a dark rayed halo, flower-like in shape. The dark part of this feature shows where the impact explosion has blasted the surface, both removing and depositing material. This feature fades with time, indicating that this is a relatively young crater. Infrared images taken during the nighttime show mainly the physical properties of the surface. The effects of daytime solar heating dissipate quickly after nightfall. Thermophysical effects then dominate as different surfaces cool at different rates through the nighttime hours. Rocks cool slowly, and therefore appear relatively bright at night (rocks are dark during the day). In contrast, dust and other fine-grain materials cool very quickly and appear dark in nighttime infrared images.

3. In this third feature, a daytime infrared image from THEMIS shows part of Aram Chaos, a large crater formed by a big impact. Over time the crater interior was modified by several different processes, including liquid water. Chaos terrain is typified by areas of blocky, often steep-sided mesas separated by deep valleys. With time and erosion, the valleys widen and the mesas become smaller. In this region of chaos, the valleys are still narrow and the mesas are large. Infrared images taken during daytime show both the landforms and the physical properties of the surface. Landscape details are visible because sun-facing slopes receive more energy than those facing away. This creates warm (bright) slopes and cool (dark) slopes that mimic the light and shadow of a visible wavelength image. Also, because dust heats up more quickly than rocks, dusty areas appear bright and rocky areas dark.

4. In this fourth feature, a THEMIS visual image shows part of northwestern Terra Cimmeria. The linear feature in the center of the image is part of a graben system. (A graben is a valley with a distinct escarpment on each side.) In this particular case, the graben crosses Terra Cimmeria from Amenthes Planum to the south all the way to Utopia Planitia in the north, a distance of over 400 km (248 miles). With a graben, two parallel faults form by extension of the crust, and the rock in between the faults drops downward. Here the graben faults lie at right angles to the extention forces, which are pulling the crust apart toward the upper left (northwest) and lower right (southeast).

5. This final image in this series features a visual image from THEMIS that spans Ganges Chasma. At the foot of the canyon's northern wall, a large landslide deposit is visible, while most of the canyon floor is covered in sand. At the very bottom of the image is part of a water-carved channel called Elaver Vallis. Ganges Chasma is located north of the main canyon system of Valles Marineris and is 574 km (356 miles) long.

As mission planners, Hill and Bender are responsible for telling the THEMIS cameras when to take an image of Mars as the spacecraft flies over interesting locations. Several times per day the spacecraft is in contact with Earth and the images are sent via radio signal to large dishes in three locations on Earth — Canberra, Australia; Madrid; and Goldstone in California — through NASA’s Deep Space Network. NASA’s Jet Propulsion Laboratory (JPL), which leads the Odyssey mission, then combines this data, which is then transferred to the THEMIS team at ASU.

“The THEMIS camera system is very much like a normal digital camera,” Bender said. “The camera takes an image which gets stored in memory.”

From there, THEMIS data archivist Kimm Murray takes the data through several automated processes to produce the final images. These images are then made available to the public and to scientists studying Mars, including on platforms like NASA’s Planetary Data System, the THEMIS website and the Mars data viewer.

In addition, THEMIS provides data for a geospatial information system (GIS) called the Java Mission-planning and Analysis for Remote Sensing, or JMARS for short, which has been publicly available since 2003; and a related smartphone app called JMARS AR Viewer, which is downloadable for free from Apple and Android stores.

The team’s contributions are not limited to the digital platform. Hill compiled 24,000 individual images taken by THEMIS to design a basketball court-size map of Mars. The map can be transported to schools and events so science enthusiasts of all ages can “walk” on Mars. The map has even traveled to the National Mall in Washington, D.C., where visitors could take a stroll on the Red Planet, go on a geographical scavenger hunt and talk to Mars scientists.

Even after two decades of images from THEMIS, there is still more to explore. The next special set of observations the ASU THEMIS team is planning involves rolling the Odyssey spacecraft to the sides to look at the horizon of Mars. Imaging the horizon and space above it will allow the team to collect a detailed view of the Martian atmosphere at various heights above the surface, all the way up to space.

“These unique observations will help to explore the atmosphere in ways that haven’t been done before by Odyssey,” Bender said.

In addition, they plan to combine data from THEMIS with two other instruments that were built by Christensen and his team at ASU — the Emirates Mars Infrared Spectrometer (EMIRS) on the United Arab Emirates’ Hope spacecraft that is currently orbiting Mars and the Thermal Emission Spectrometer (TES), an instrument on the now-decommissioned Mars Global Surveyor. By combining the data from these three instruments, the team hopes to create a powerful database of surface temperature and mineral measurements of Mars.

“There are many space missions collecting data in orbit and on the surface of Mars,” said Bender, who was present at Odyssey’s launch from Kennedy Space Center more than 20 years ago. “But THEMIS is still the only NASA infrared imager at the Red Planet, so it remains a very powerful and unique instrument exploring the surface.”

With 20 years of data, there are mountains of research related to THEMIS, but principal investigator Christensen does have his own top five list of discoveries listed here in rank order. To read about more discoveries, visit the ASU THEMIS webpage.

1. Mars has large expanses of exposed bedrock: THEMIS results show winds have scoured many areas of Martian bedrock clear of sand and dust.

3. Gas jets spawn dark “spiders” and spots on Mars ice cap: Scientists use THEMIS data to discover that sand-spewing gas jets are the cause of mysterious dark markings that appear every spring on the Martian south polar cap.

4. Melting snow carved gullies: Water from melting snow eroded many of the geologically recent gullies on Mars — and snowpacks still linger on many poleward-facing slopes in the middle latitudes.

5. Olivine-rich rocks point to cold, dry Martian past: In Syrtis Major, THEMIS mapped the largest known exposure of olivine-rich rocks on Mars. Because olivine decomposes easily when wet, its survival from ancient times suggests Mars has been cold and dry for much of its history.

NASA’s 2001 Mars Odyssey spacecraft launched on April 7, 2004, and arrived on Oct. 24, 2001. The orbiter, which takes its name from Arthur C. Clarke’s classic sci-fi novel “2001: A Space Odyssey” (he blessed its use before launch), was sent to map the composition of the Martian surface, providing a window to the past so scientists could piece together how the planet evolved. But it has done far more than that, uncovering troves of water ice, serving as a crucial communications link for other spacecraft and helping pave the way not just for safer landings but astronauts.

THEMIS was built and is operated by Arizona State University in Tempe. Odyssey's Gamma Ray Spectrometer was provided by the University of Arizona, Los Alamos National Laboratory and the Russian Space Research Institute. The prime contractor for the Odyssey project, Lockheed Martin Space in Denver, developed and built the orbiter. Mission operations are conducted jointly from Lockheed Martin and from JPL, a division of Caltech in Pasadena, California.

The Sun Devils have broken multiple program records on consecutive days at the NC State Invitational. ... The Sun Devils have broken multiple program records on consecutive days at the NC State Invitational.