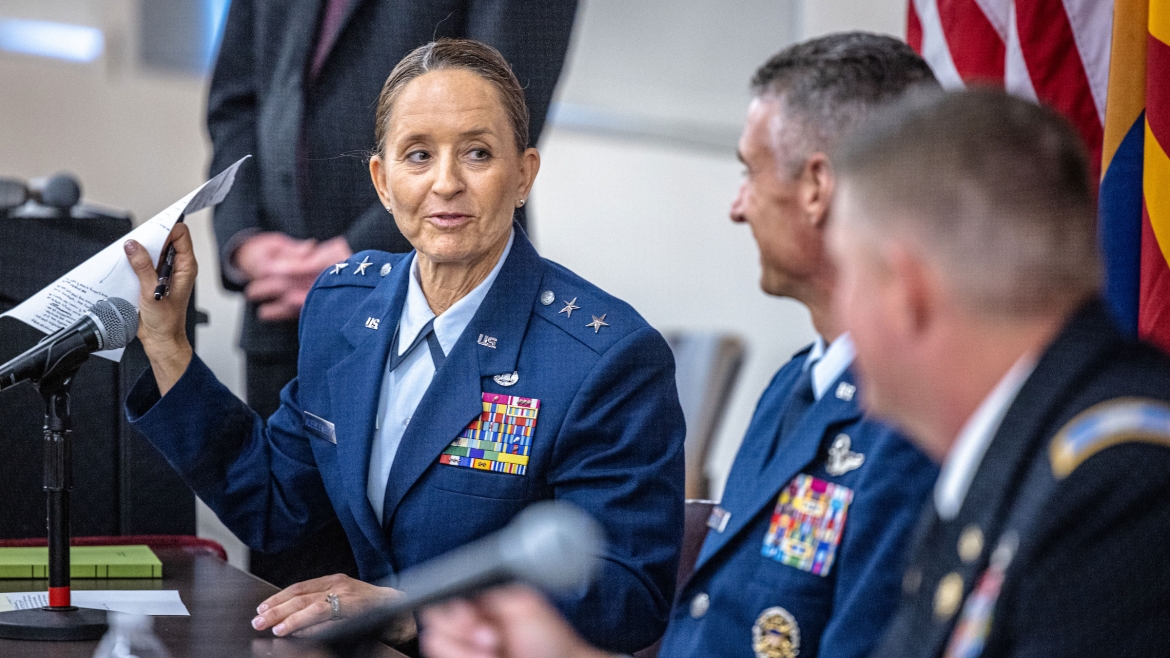 As part of Salute to Service, ASU’s Office of University Affairs hosts panel discussion on the great power competition with Russia and China

America’s future military will have to be faster, smarter and technologically savvy, possess streamlined procurement and become more nimble if they are to remain a global superpower.

That was the consensus of an all-star panel of Arizona military leaders who assembled Friday at the Memorial Union on the Tempe campus as part of Arizona State University’s Salute to Service.

“If we are to win our nation’s wars in the future, we have to be able to innovate and change the way we think and the trust we have in our airmen and women,” said Brig. Gen. Gregory Kreuder, commanding general of the of the 56th Fighter Wing at Luke Air Force Base, which is home to approximately 7,000 service members. “We have to be able to give them the tools they need quickly, rapidly and get out of their way.”

Kruder’s comment was made during a discussion on the great power competition between Russia, China and the United States, and what the military will look like in the next two decades.

“The university and The College are very proud to host these kinds of distinct panels and have this many young people simultaneously striving towards college degrees as well as becoming officers in the military,” Kenney said. “The university is very happy to play this role.”

ASU’s Office of University Affairs sponsored the event, which drew about 100 people, many of them ASU's ROTC members. Titled “Great Power Competition: Russia and China,” the goal of the panel was to address future threats to the nation through its two main adversaries.

One of the future challenges will be airspace competition, said Muehlenbeck.

“China and Russia are moving the needle on technological advancements in terms of electronic warfare, artificial intelligence and manufactured intelligence,” Muehlenbeck said. “We’re getting to a point now where we’re not going to enjoy air superiority like we did in the last 20 years. It’s important that we have agile airmen who are ready to engage in just about any environment.”

Engagement with China wouldn’t be pretty, Moreland said, given the country’s rapid nuclear buildup over the past decade, the recent announcement of a hypersonic missile and the recent discovery of 250 planned long-range missile silos by open-source military analysis.

And there’s not much that can be done to stop them, according to Moreland.

“As far as doing anything about it on their sovereign soil, I don’t think there’s really much we can do without instigating a war, and we’re not looking forward to that,” said Moreland, who added that good intelligence can help the military figure out a forward path of deterrence.

China is also winning the war on other fronts, including challenging the United States on “the war within,” Kreuder said.

“There are two types of companies in the U.S. — those who know they’ve been hacked by China and those who don’t know they’ve been hacked by China,” Kreuder said. “China also knows how to not trigger the level of war, but they’re undermining all the liberal institutions that we’ve set up post-World War II, including agreements for free trade security, the World Trade Organization, the United Nations and NATO. So how do we ensure China does not generate conflict? Any good diplomatic maneuver has to be backed by a strong military.” 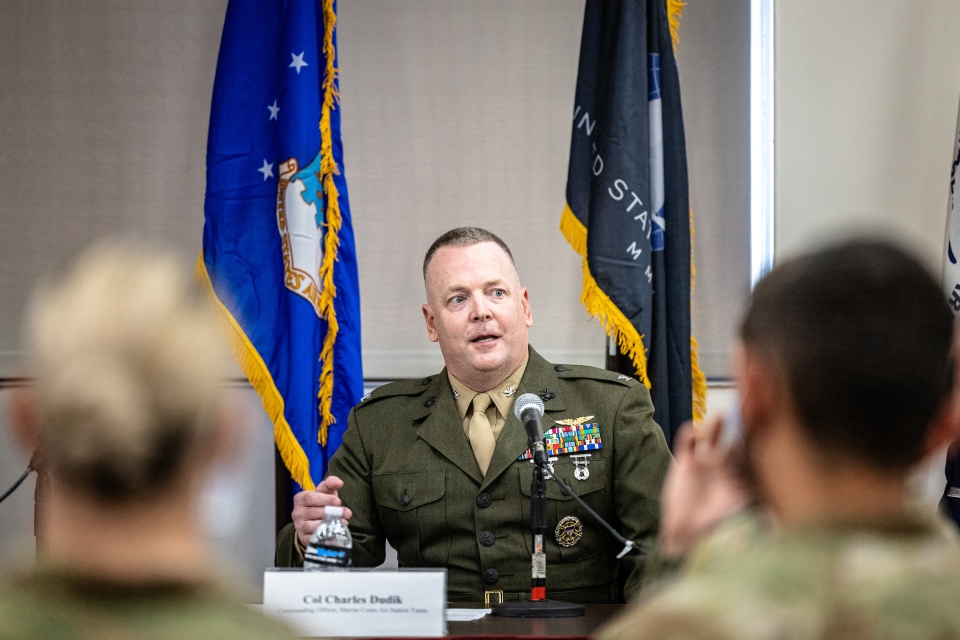 Col. Charles Dudik, commander of Marine Corps Air Station in Yuma, Arizona, speaks at the panel Friday in the Memorial Union on ASU's Tempe campus. Nearly 100 university ROTC members and other faculty and staff were in the audience. Photo by Charlie Leight/ASU News

Having a strong military presence on the world stage is crucial, Dudik said.

“Global leadership absolutely matters. You can’t do that from afar,” Dudik said. “It’s a road that means positioning in terms of an alliance with Japan or Australia or where else we’re talking about freedom. The basic concept of being present to offer credible deterrence, credible support and reassurance to allies is exactly the precise role we have to play.”

But in order to continue playing that role, the military needs to continue to improve on all fronts. That includes partnering with private business on production, speeding up procurement methods, limiting bureaucracy and improving technology and modernization, the panel said.

None of that matters, though, without strong leadership, panel members said — which sets the foundation that these young cadets in the crowd must possess.

Muehlenbeck was perhaps the most specific in what her ideal leader looked like.

“I’m looking for the service ethos, those individuals that are really called to serve,” Muehlenbeck said. “I’m looking for people who get goose bumps or a lump in the throat when the national anthem plays … and I also think I’m looking for a little bit of humility.”

Salute to Service runs through Nov. 11.

Top photo: Maj. Gen. Kerry Muehlenbeck, the adjutant general for Arizona, speaks during a lunchtime discussion panel Nov. 5 with other Arizona military leaders on “Great Power Competition: Russia and China,” at the Memorial Union on ASU's Tempe campus. Nearly 100 university ROTC members and other faculty and staff listened to the discussion moderated by Dean Patrick Kenney of The College of Liberal Arts and Sciences. The leadership stressed the need for future officers to help address the intelligence and technology requirements of the future to overcome the challenges brought on by the eastern European and Asian superpowers. Photo by Charlie Leight/ASU News

Lester Holt, “NBC Nightly News” anchor and award-winning journalist, broadcast the network’s evening news show from the rooftop of the Walter Cronkite School of Journalism and Mass Communication on Friday as part of his five-day “Across America” anchoring tour. Phoenix was the last stop on the tour that included Austin, Texas; St. Louis; Washington, D.C.; and Nashville, Tennessee. Holt...

Lester Holt, “NBC Nightly News” anchor and award-winning journalist, broadcast the network’s evening news show from the rooftop of the Walter Cronkite School of Journalism and Mass Communication on Friday as part of his five-day “Across America” anchoring tour.

Phoenix was the last stop on the tour that included Austin, Texas; St. Louis; Washington, D.C.; and Nashville, Tennessee. 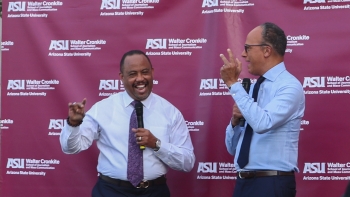 Holt arrived at the Cronkite School on Arizona State University’s Downtown Phoenix campus at 10:30 a.m. to interview a reunited Afghan family in the Elizabeth Murphy Burns and Richard Burns Theater. In the afternoon, he was escorted to the sixth floor to meet his team of engineers, sound technicians and producers to prepare for the “Nightly News”  broadcast.

Holt’s visit to the Cronkite School also included a Q&A with Dean Battinto L. Batts Jr. and students — an event requested by Holt — so that he could answer students’ questions about the journalism profession.

About 200 students, parents and alumni attended the event. Students asked questions ranging from the impact of being the first Black man to solo anchor a weekday network nightly newscast to whether his celebrity image helps or hampers his role as a journalist.

Batts asked Holt to consider what he would tell his younger self, knowing what he knows now.

“Come to this school!” he said, referring to Cronkite. Also, “spend less time trying to climb the ladder and more time enjoying the view.”

As a preeminent broadcast journalist, Holt was selected to moderate the first presidential debate of 2016, which was the most-watched debate in American history. Holt told the crowd that it was the “hardest job by far.”

“It was a moment of fulfillment and incredible relief when it was over,” he said.

Holt also told the future journalists that they have a responsibility to society.

“Trust is the center of what we do,” he said. “People need to see us as human beings.”

This wasn’t Holt’s first visit to the Cronkite School. Holt was honored with the prestigious Walter Cronkite Excellence in Journalism Award in 2019 at a ceremony attended by more than 1,000 media, business and community leaders as well as Cronkite School students and supporters.

Holt has anchored the flagship NBC broadcast since 2015, following eight years as anchor of the newscast’s weekend edition and 12 years as co-anchor of “Weekend TODAY.” He also leads NBC’s special reports, major breaking news and primetime political coverage, and he has served as principal anchor of “Dateline NBC” since 2011.

Holt joined NBC News in 2000 and is most known for his on-the-ground reporting and his deep commitment to providing viewers with first-person accounts of major news events. He has covered more than a dozen natural disasters, including the aftermath of hurricanes Katrina, Harvey and Irma, the California wildfires and the COVID-19 pandemic. He has also covered the 75th anniversary of D-Day, the growing tensions between North Korea and the United States in 2018, and every Olympics on the ground since the 2002 Winter Olympics.

Holt came to MSNBC after 14 years at WBBM-TV in Chicago, where he served as the afternoon and evening news anchor. After studying government at California State University in Sacramento, he began his television journalism career as a reporter at WCBS-TV in New York in 1981. The following year he moved to Los Angeles to report for KCBS-TV (then KNXT) before returning to WCBS in 1984.

In addition to the Walter Cronkite Excellence in Journalism Award, Holt has been recognized with numerous honors, including multiple Emmy Awards and a Robert F. Kennedy Journalism award. In 2017, he was honored with Quinnipiac University’s Fred Friendly First Amendment Award. In 2016, Holt received several notable designations: He was featured on TIME’s “100 Most Influential People” list and The Hollywood Reporter’s “Most Powerful People in New York” list, and he was named “Journalist of the Year” by the National Association of Black Journalists.