“I really value the experiences I had at ASU, interacting with the faculty to explore different directions that my career could take,” Vermaas said. 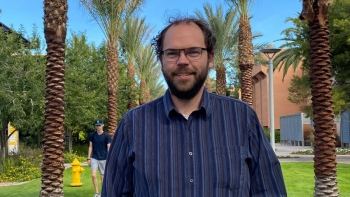 After completing a PhD in biophysics from the University of Illinois at Urbana-Champaign and a postdoc at the National Renewable Energy Laboratory in Golden, Colorado, Vermaas is currently an assistant professor at Michigan State University.

Deciding to become an academic is daunting for anyone, but as the son of an academic, Vermaas already had full knowledge of the trials and tribulations involved. Undaunted, he took the plunge, as an assistant professor in the MSU-DOE Plant Research Laboratory and the Department of Biochemistry and Molecular Biology at Michigan State University as of January 2021.

Vermaas said his advice to undergraduates and graduates students is that networking really helped him move through the stages of his career: from undergraduate student to PhD to postdoc, and then Michigan State University. Knowing certain people made things much easier, he said.

"Josh is a very enthusiastic young colleague whose work on catalysis of materials, not just molecules, earns him a special place at the intersection of the biophysics and energy sciences community," said Abhishek Singharoy, assistant professor in the School of Molecular Sciences.

While taking Physics 151 at ASU, Vermaas learned the programming language Python and leveraged this in his honors project with President’s Professor Ian Gould, an associate director of the School of Molecular Sciences. He developed an infrared simulator, which showed how different chemical bonds vibrate at distinct frequencies.

Vermaas was engaged in various research as an ASU undergraduate with professors Bruce Doak (now in Germany) and Kevin Schmidt, in the Department of Physics. He was also involved with nano-thermodynamics simulations with professors Ralph Chamberlin (physics) and George Wolf (School of Molecular Sciences).

Vermaas said that the mix of research experiences taught him he was prone to breaking things in the lab, so he took it as a sign that he was meant to do computer simulations instead. 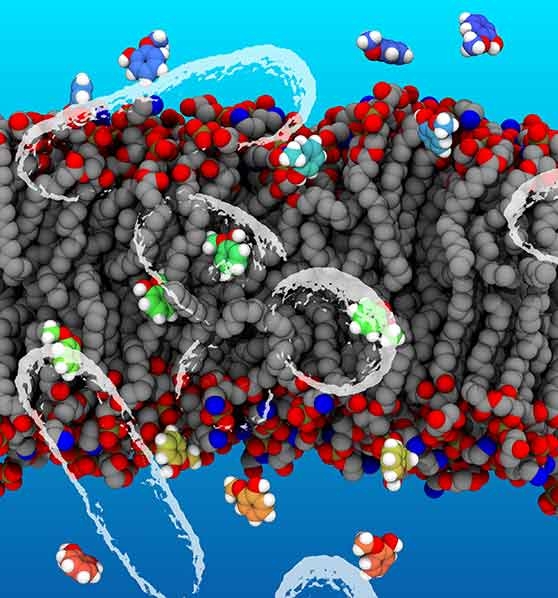 Lipid bilayers are semipermeable to small molecules, such as the guaiacol molecules shown here. To emphasize the biological context, electron micrograph images of the bacteria have been overlaid onto the model rendering. Image credit: Josh Vermaas.

The Vermaas lab uses atomic simulation tools to create accurate molecular-scale models for biological phenomena at the nanoscale. In this form of computational microscopy, Newton’s equations of motion track atomic positions for a system over time. The dynamic simulations provide a unique perspective to better understand the connection between form and function for nanostructures found throughout biology. The insights from these simulations can then be applied to engineering plants or microbes to facilitate efficient energy conversion and bioproduct production to meet today’s sustainability challenges.

Current Athletes -- Who Already Are ASU Alums -- Are Working Hard

Take a closer look at a few of the many Sun Devil graduates competing another year in Tempe. ...

Current Athletes -- Who Already Are ASU Alums -- Are Working Hard Take a closer look at a few of the many Sun Devil graduates competing another year in Tempe.