Record queues of container ships wait at anchor outside the Port of Los Angeles. A 20-mile traffic jam clogs rail lines in Chicago. Store shelves are bare and shortages of numerous products — from automobiles and laptops to clothing, toys and even Christmas trees — are showing up across the country. Given that the U.S. has been living with the COVID-19 pandemic for more than 18 months, why are there still kinks in the supply chain?

For years, global supply chains expanded and became increasingly complex in a quest to make shipping goods and services around the globe cheaper and faster. The COVID-19 pandemic threw these finely tuned systems into tailspin. Supply chain expert Zachary Rogers from Colorado State University will explain where we go from here, opportunities in innovation and connection, and how this may affect our lives at a free lecture at 5 p.m. Tuesday, Nov. 2, that can be attended in person or online. 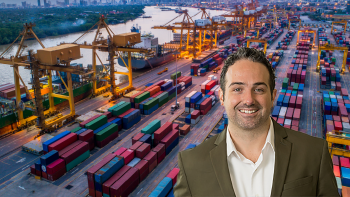 Supply chain expert Zachary Rogers from Colorado State University will explain why are there still kinks in the supply chain at a free lecture on Tuesday, Nov. 2, that can be attended in person or online. Download Full Image

Supply chains are experiencing growing pains as they adjust to the new reality. Fortunately, COVID-related disruptions are also bringing to light new ways to innovate for the future. COVID-19 was not the first disruption to impact supply chains around the world, and it will not be the last. We must heed the hard-won lessons from COVID-19 and build resilient systems that will be ready for future disruptions.

Rogers serves as an analyst co-author for the Logistics Managers’ Index (LMI). This bimonthly publication tracks a broad range of logistics activity in the United States and publishes key logistics metrics that act as leading indicators predicting future economic activity. Its information is critical to companies dependent on the complex national and international network for product distribution. Such data are also used by investment professionals and government agencies in planning strategies for U.S. economic growth. This lecture will provide an inside look into the challenges facing consumers as we enter the holiday season — and perhaps an optimistic perspective on opportunities for new business growth.

This lecture series is an annual event that highlights the ASU Biodesign Institute’s broad range of excellence in human health, community safety and global sustainability. The series was inspired by Charles Arntzen, Biodesign’s founding director from 2001–03. He is a biotechnologist best known for his research on new strategies for biomanufacturing protein pharmaceuticals.

The free, annual Arntzen Grand Challenge Lecture will be held in-person in the Biodesign Auditorium, Biodesign B, 727 E. Tyler St., Tempe, AZ 85281 on the Tempe campus. Livestreaming also will be available.

To advance climate action and protect the world’s vital ecosystems, resources must be made accessible to those in conservation. In an effort to support expanded coral reef protection — an ecosystem integral to coastal communities and marine biodiversity — Arizona State University is partnering with the Commonwealth Secretariat to bring cutting-edge coral-mapping technology to the teams at th...

To advance climate action and protect the world’s vital ecosystems, resources must be made accessible to those in conservation. In an effort to support expanded coral reef protection — an ecosystem integral to coastal communities and marine biodiversity — Arizona State University is partnering with the Commonwealth Secretariat to bring cutting-edge coral-mapping technology to the teams at the forefront of policy action.

Through their partnership, ASU and the Commonwealth Secretariat will provide governmental decision-makers and coastal managers with cutting-edge data from the Allen Coral Atlas: a tool mapping and monitoring the world’s tropical coral reefs in unprecedented detail, led by ASU. 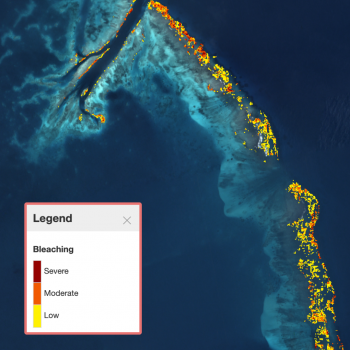 “The Commonwealth is home to 45% of the world’s tropical coral reefs, which act as vital reservoirs of marine life and biodiversity, natural sea defenses, and a source of life and livelihood for millions of people. However, they are severely threatened by global warming and other human pressures.” said Paulo Kautoke, senior director for trade, oceans and natural resources at the Commonwealth Secretariat. “This initiative will provide Commonwealth countries with essential geographic data and ecosystem health information to protect and manage their coral reefs in a sustainable manner. The Commonwealth Blue Charter action groups can also facilitate learning and help member countries make the most effective use of this information.”

Earlier this year, the Allen Coral Atlas added a groundbreaking new feature to monitor coral bleaching by using satellite images to detect whitening on the seafloor. Bleaching is driven by climate change, pollution and other stressors, and it occurs when marine heat waves cause coral to expel algae and lose their color.

To push adoption of the groundbreaking tool, the Commonwealth Secretariat will soon be launching online training modules for coral managers and technicians in member countries to learn how to use the Allen Coral Atlas to map local reefs, study bleaching trends and feed this data into policy and decision-making processes.

The Commonwealth Blue Charter is implemented through 10 country-driven action groups, each led by a "champion country." Championed by Australia, Belize and Mauritius, the action group on coral reef protection and restoration include countries such as the Bahamas, Barbados, Sri Lanka, Trinidad and Tobago, and the United Kingdom.

“By partnering with the Commonwealth Secretariat, the Allen Coral Atlas will reach new countries and communities as a resource to generate and scale coral reef protection and management,” said Greg Asner, managing director of the Allen Coral Atlas and director of the Center for Global Discovery and Conservation Science at ASU. “The true impact will best be achieved as more governments and organizations implement the Atlas toolkit in pursuit of long-term reef sustainability, biodiversity protection, and the preservation of human livelihoods that depend on the world’s coral reefs.”

Since its launch in 2017, the Allen Coral Atlas has become the pre-eminent coral reef habitat dataset and is already in use by many Commonwealth countries. For example, the habitat maps were used by the Commonwealth in mid-2021 to track the enduring impacts of the MV Wakashio oil spill, which occurred in Mauritius last August, and the same maps were used by the government of Sri Lanka in 2019 to upgrade a marine protected area to a national park.

Through this partnership, the Allen Coral Atlas is positioned to be widely utilized as an integrated and comprehensive resource to protect underwater ecosystems and drive informed ocean policy.