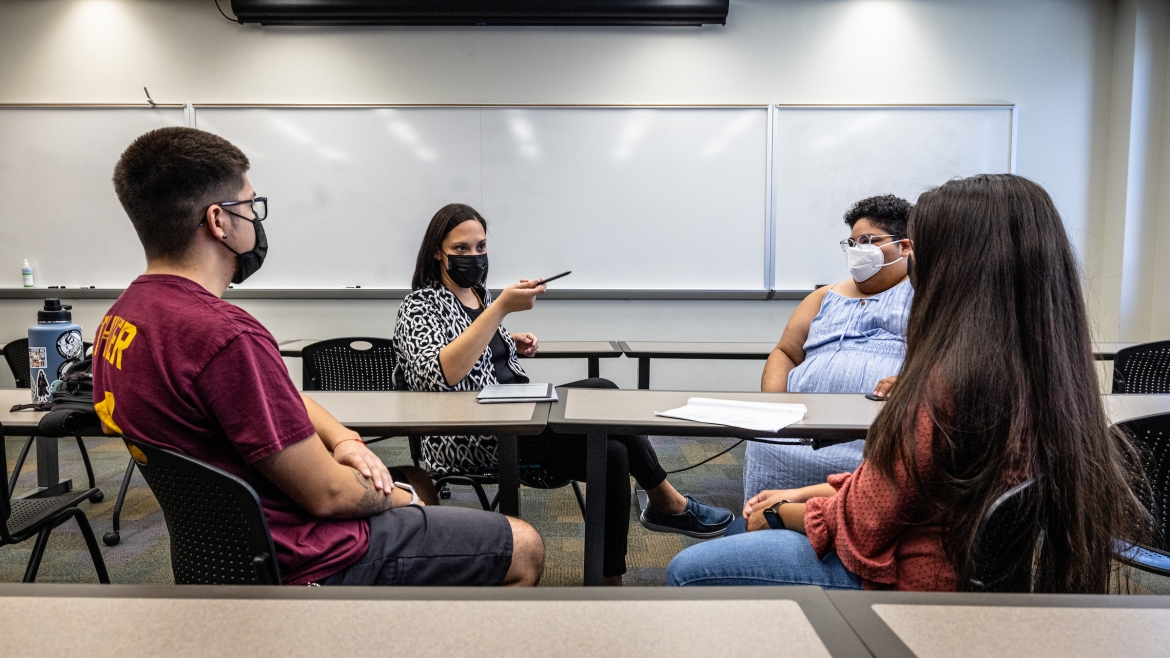 Between 2010 and 2020, enrollment at Hispanic-serving institutions — colleges or universities with a student population that is at least 25% Hispanic — grew by 94% in the U.S. At Arizona State University, Hispanic enrollment increased 51% for combined on-campus and online students from fall 2016 to fall 2020.

While the overall boom in Hispanic enrollment these numbers represent is encouraging, many Hispanic students still struggle to find representation within the various fields of academia. It’s an experience Cristalís Capielo, an assistant professor of counseling and counseling psychology at ASU’s College of Integrative Sciences and Arts, knows intimately.

After moving to Florida from her native Puerto Rico in 1998, Capielo and her family faced a number of challenges adapting to their new home, including navigating an education system that was ill-equipped to meet her and her sister’s needs, despite the fact that they were U.S. citizens.

Capielo wanted to know why. In her quest to find out, she ended up at the University of Georgia, where she met Professor Edward Anthony Delgado-Romero, who became her mentor. Under his leadership, Capielo and a number of fellow Latino students formed an informal research group. Second-year counseling master’s student Leo Covarrubias said having the support of Cristalís Capielo, assistant professor of counseling and counseling psychology at ASU’s College of Integrative Sciences and Arts, and the PLENA Lab has been invaluable. 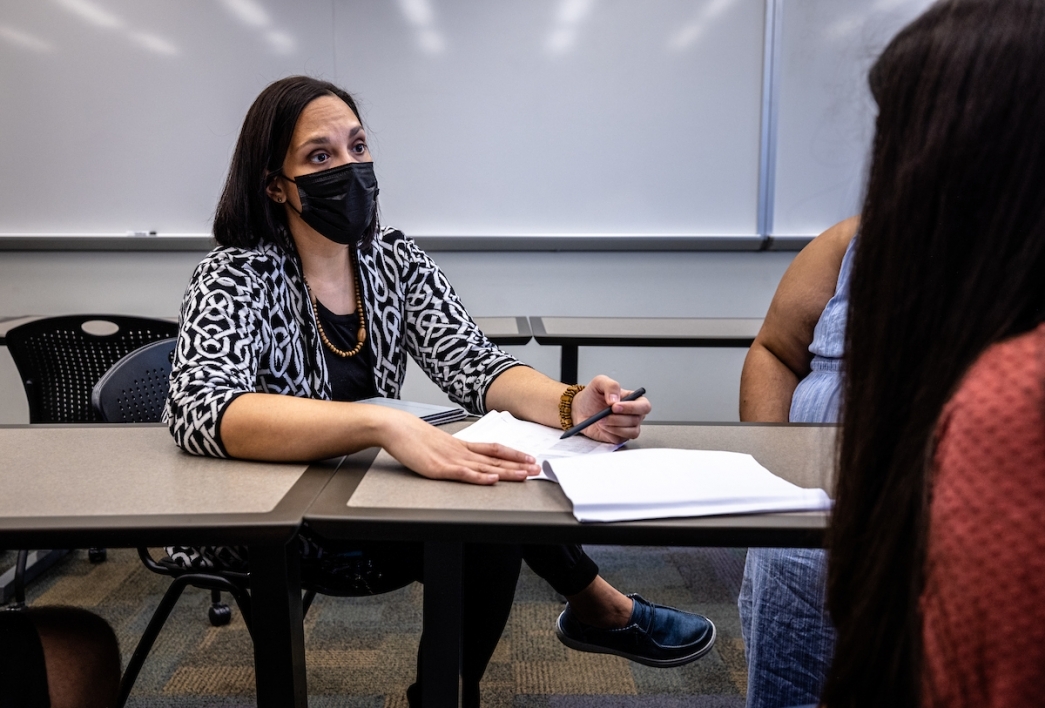 The nature of Capielo’s research stems from her own experience moving to Florida from her native Puerto Rico. Second-year counseling master’s student Lisa Gutierrez said being a part of the PLENA Lab helped her combat imposter syndrome as a first-generation student of Mexican descent.

When she came to ASU in 2016, Capielo knew she wanted to create something like that here. It started slowly, with one student, then two — today, the PLENA (Psicología Latinx en Accíon) Lab has grown to 15 students, representing undergraduate, master’s and doctoral students.

As was true of Capielo’s group at the University of Georgia, the PLENA Lab serves as a space for psychology students researching issues of multiculturalism and Latino psychology to network, collaborate and support one another.

Loiza DeJesus, a first-year PhD student in counseling psychology, first learned about Capielo, her work and the PLENA Lab at a National LatinxLatinx is a gender-neutral replacement for Latino preferred by some individuals and groups. Psychological Association conference a few years ago.

“I spent like two years doing everything that I could to get into this lab,” said DeJesus, who is also of Puerto Rican descent but hails from Chicago, where she received her master’s degree from Roosevelt University.

“I was very specifically looking for somebody doing work with Puerto Ricans, which is very rare. I could probably count on one hand the number of Puerto Ricans in the field who are doing this kind of work. But Latinx psychology researchers in general are still incredibly rare.”

The nature of Capielo’s research stems from her own experience.

“When my family moved here, we thought that as Puerto Ricans, because we were U.S. citizens, it would be easy to adjust,” Capielo said. “We thought my parents would be able to find jobs commensurate to their education and experience, and that my sister and I would transition smoothly into school. It was not that way.”

Instead, Capielo recalled, they experienced racism, difficulty finding employment and navigating the school system, and a host of psychological issues as a result. As she began to meet other Latino immigrants whose stories were similar to hers, she became determined to get to the root of the cause.

“What I kept finding in my own data and learning from other scholars is that these persistent health disparities — and as a result, a person’s overall well-being — are inextricably connected to socio-political factors,” Capielo said. “For example, mixed documentation status within families is a huge determinant of access, which in turn is a determinant of health. So I’m trying to look beyond the cultural differences to what are the systems — political, legal, education, etc. — that allow for these persistent health disparities in Latinx communities.”

One of Capielo’s recent studies, for which DeJesus audited data, sought to understand how colonial logistics, or discriminatory ideas based on race, influence the identity development of Puerto Ricans who migrated to Arizona and Florida. For her thesis, DeJesus hopes to replicate the study with a different population: second- and third-generation Puerto Rican youth in her hometown of Chicago.

Capeilo encourages students in the PLENA Lab to pursue their own research interests but also understands that many haven’t had any research experience at all, and often invites them to contribute to her current projects.

“My job as an adviser to them goes beyond creating a space where they feel supported. I also provide guidance,” she said. “I help them learn about academic writing and how to deal with rejection and integrate feedback to make their work better. I love seeing their confidence in themselves improve and how that is reflected in their own work.”

Every Monday, Capielo meets with the PLENA Lab students for progress updates.

“The first thing we do is ask for celebrations,” she said. “What are we celebrating together? What were you able to accomplish? It helps them to be accountable and set realistic goals for the week, but it’s also about spending a bit of time supporting each other and normalizing that grad school can be difficult, especially if you happen to also be a member of a minority group. Because that comes with additional, very unique stressors.”

Second-year counseling master’s student Leo Covarrubias said having that support has been invaluable.

“There’s definitely a lack of representation of students who, you know, look like us or have names like us in the field,” he said.

Covarrubias and fellow second-year counseling master’s student Lisa Gutierrez, who are both of Mexican descent, attest they and other Latino students in their cohort are among the minority.

“So that, and being a first-generation student and coming from a small town … the imposter syndrome was so big,” Gutierrez said. “But Cristalís just kind of validated me and gave me a reminder, like, hey, you belong here, and she's just given us the inspiration and the power and the drive to continue on.”

For Capielo, it’s all in a day’s work.

“This is what I saw my mentor do,” she said. “He’s the reason I’m here; he saw potential in me and he gave me an opportunity. I see it as my responsibility to continue that and give as many opportunities to students as I can.”

As part of National Hispanic Heritage Month, which is celebrated from Sept. 15 to Oct. 15 every year, the School of International Letters and Cultures at Arizona State University held a series of events during the first full week of October for its Spanish Heritage Language Awareness Week. Heritage speakers of a language are those who grew up speaking the language with family, friends or...

As part of National Hispanic Heritage Month, which is celebrated from Sept. 15 to Oct. 15 every year, the School of International Letters and Cultures at Arizona State University held a series of events during the first full week of October for its Spanish Heritage Language Awareness Week.

Heritage speakers of a language are those who grew up speaking the language with family, friends or other members of their community, as opposed to learning it for the first time in a formal educational setting. 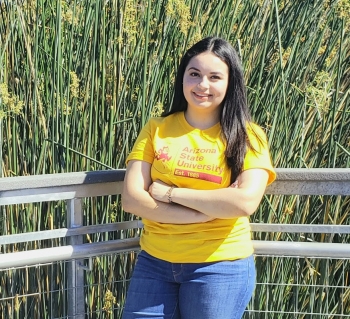 Junior Odalis Amaya Amaya decided to join the Spanish Heritage track to learn more about the language and culture she was raised with. Her parents migrated to the U.S. from Mexico and speak only Spanish, so Spanish is her primary language at home with them. Download Full Image

The school's Spanish department includes a specific Spanish heritage track that helps “reconnect students to their cultural heritage and linguistic roots, as well as build their self-confidence and sense of identity,” said Sara Beaudrie, the director of ASU’s Spanish Heritage Program.

It is one of the largest such programs in the country and includes a significant online presence.

Junior Odalis Amaya Amaya decided to join the Spanish heritage track to learn more about the language and culture she was raised with. Her parents migrated to the U.S. from Mexico and speak only Spanish, so Spanish is her primary language at home with them. With her Spanish-speaking friends, meanwhile, she typically speaks English with some Spanish mixed in.

“Spanish has always been a part of my life since it was my first language,” Amaya Amaya said. “After I took my first Spanish class here, I knew I wanted to continue to take more Spanish classes and learn as much as I possibly could about my culture and where I come from. To me, it is important to develop my Spanish language skills to continue to have bonds and relationships with individuals who only speak Spanish and, more importantly, my family.”

Heritage courses differ from other language classes by focusing more on comfort and confidence in a language rather than rigid fluency. These courses strive to meet language speakers where they are to avoid repeating lessons they already know or assuming the level of knowledge they are entering the classroom with.

“I enjoy spending time in the classroom with other ASU students who come from the same background that I do because we all have that connection that allows for us to feel more comfortable with one another,” Amaya Amaya said.

Instructors of heritage classes are aware that heritage speakers may have complicated feelings toward the language they grew up around, such as frustration at not being at the level of competency they desire or disappointment at not being taught the language sooner.

Spanish Instructor Melissa Negrón, the coordinator of the Spanish Heritage Program, said the goal is to value students’ unique backgrounds and help them find their voices in Spanish-speaking communities, as well as the many other linguistic and cultural contexts they inhabit.

“Our students in the heritage program explore the complicated relationship of growing up in/with multiple cultures and sometimes feeling the need to pick one or the other,” Negrón said. “In the Spanish heritage classes, they are able to find a space where their multicultural identities and experiences are celebrated.”

Beaudrie, who is also an associate professor of Spanish linguistics and the associate director of the School of International Letters and Cultures, said research shows that Spanish heritage programs improve college retention for Latino students and help them build a community and find mentors.

Spanish heritage programs “teach them that their bilingual voices and ways of speaking are valid and should be celebrated,” Beaudrie said.

Amaya Amaya, a concurrent major in criminology and criminal justice and Spanish linguistics, sees her bilingualism as an asset for her future career, as well as her communication with friends and family.

“Being in the heritage program here at ASU made my love for Spanish grow even more because in the past I had not really embraced it as much as I do now,” she said. “I now understand the importance of continuing to be a part of this heritage and learning more about it every day.”