Editor’s note: This story is featured in the 2021 year in review.Arizona State University completed its 1 millionth COVID-19 test on Thursday, a milestone that commemorates the university’s massive effort to marshal all its resources and respond to the pandemic statewide, from Window Rock to Yuma.ASU invented and developed enough tests to administer one to 1 in 7 Arizonans.“The completion ... 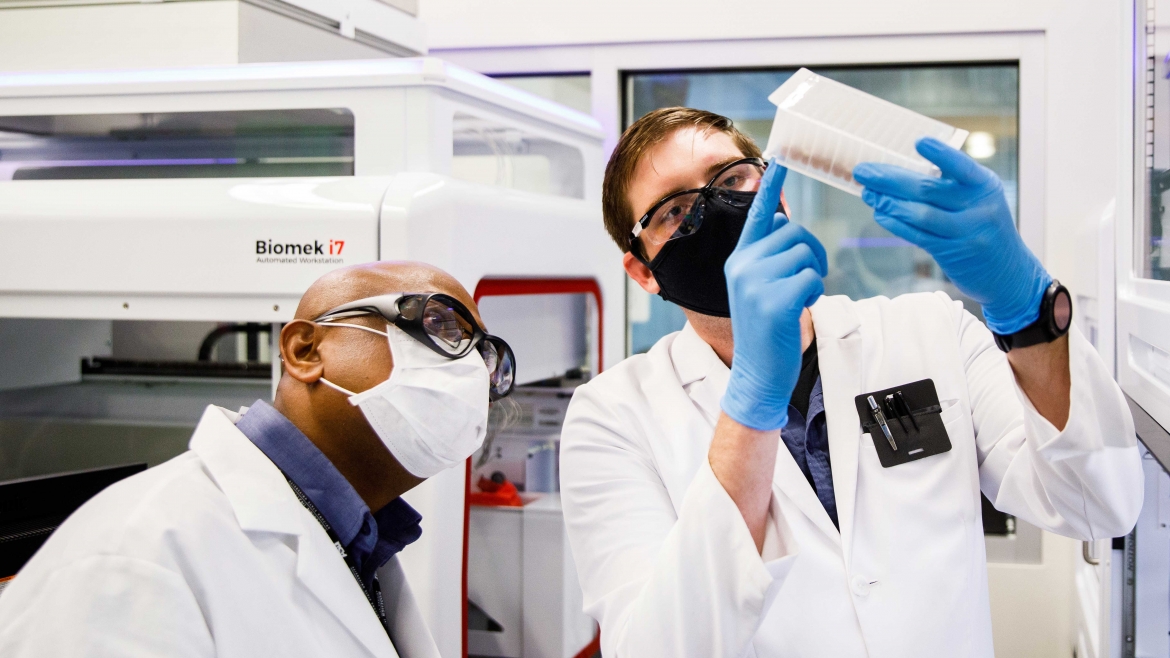 It took many partners, workers and volunteers to provide saliva testing to public and the university community

Arizona State University completed its 1 millionth COVID-19 test on Thursday, a milestone that commemorates the university’s massive effort to marshal all its resources and respond to the pandemic statewide, from Window Rock to Yuma.

ASU invented and developed enough tests to administer one to 1 in 7 Arizonans.

“The completion of the university’s 1 millionth COVID test is a remarkable milestone, and a moment to reflect on the efforts of so many who joined together to address this urgent need,” said Sally C. Morton, executive vice president for Knowledge Enterprise. “Research at ASU is focused on providing value to the public, like the value created by access to saliva-based tests. When we are able to quickly translate knowledge from our labs to our communities we can solve problems and improve lives.”

Prior to the saliva test, the only option available in the early months of the pandemic was an expensive and uncomfortable nasal swab, which took too long to process and was risky for health care workers to collect, as they had to be in close proximity of an unmasked, potentially ill person — and sometimes the swab would trigger a sneeze. Researchers had to find a better way.

“There was a need, and then ASU and the Biodesign Institute stepped up,” said Vel Murugan, associate director of research and an associate research professor at the Biodesign Virginia G. Piper Center for Personalized Diagnostics. “And we did it. We saved a lot of lives for sure.”

RELATED: How to get a saliva test, for both the public and ASU community

Sixty-four percent were given to the public, many at the 71 public testing sites around Arizona that were designed by ASU and administered by the Arizona Department of Health Services.

Part of the team’s impact came early on in the crisis. Commercial clinical labs were delayed in their results. Test results weren’t getting back to people for seven to 10 days.

“At that point, those people were probably no longer infectious. But we were getting results to people always under two days, always within 48 hours and usually between 24 and 30 hours from the time that the sample hit the lab,” said Dr. Joshua LaBaer, executive director of the Biodesign Institute.

“We were getting answers to people back when it mattered for them to know that they were infected and know that they had to get out of circulation. That's been a point of pride for us. We've maintained that sort of rapid turnaround the whole time.”

After robotics capability was scaled up in November 2020, up to 12,000 test samples could be processed in a day. Nine automated liquid handlers (robots) traveled a combined total of more than 2 million linear feet processing samples. The highest number of samples processed in one month was 131,423 in January 2021.

“This is a milestone that reflects the university’s commitment to be of service to the people of the state of Arizona,” said ASU President Michael Crow. “Regardless of the surges and plateaus in the number of cases of COVID-19, testing will continue to be a critical component in how society manages its way through the impact of this deadly virus.

“The scientists and staff who have worked on behalf of the university to provide the volume of testing are part of the essential workers who have helped keep things moving forward in Arizona. Today, the university is hard at work developing a rapid point-of-need test that will provide another important tool as we continue to do all we can to be a resource for the state in the fight against COVID-19.” 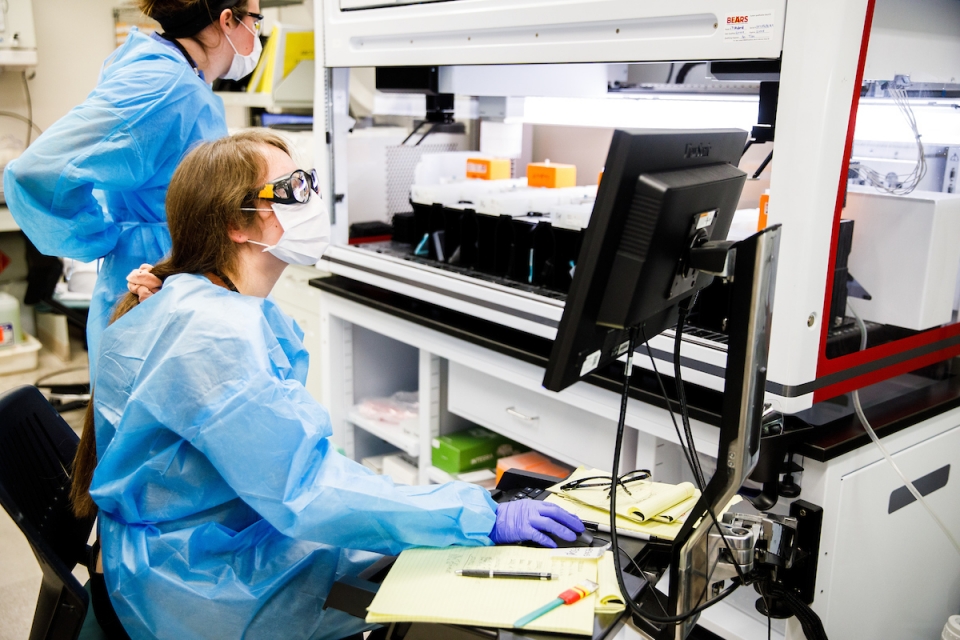 The race to start testing

When the Biodesign team started the lab, they had three things in mind: provide a sensitive test, operate in a safe environment during a pandemic and have a turnaround time of less than 48 hours. They achieved all three.

The team set up a clean lab in one month, then put all the documentation together and test-validated it — making sure that they could do it.

“It's a big achievement for us, especially if you think about it at the beginning of last year,” Murugan said. “We didn't have any of this in place.”

They started out doing about 50 tests per day, but that was soon ramped up.

The achievement speaks to the flexibility of the team in collections and processing samples in the lab, Murugan said.

“It’s a kind of team approach, you know?” he said. “I'm glad that I had a chance to lead this team with Josh, and I'm proud of them.”

The university’s charter states that it assumes fundamental responsibility for the overall health of the communities it serves.

“We took that to heart,” LaBaer said. “In some ways it redefines the role of the university and society. We're not just a repository of knowledge or even creators of knowledge, but we’re people who implement that knowledge in a way that actually impacts our community.

“We have the unique capability that we have people from many different backgrounds with knowledge in their areas located in the same institution. And when you bring those people together from that multidisciplinary team and put them to work at solving a problem, they do really big things.” 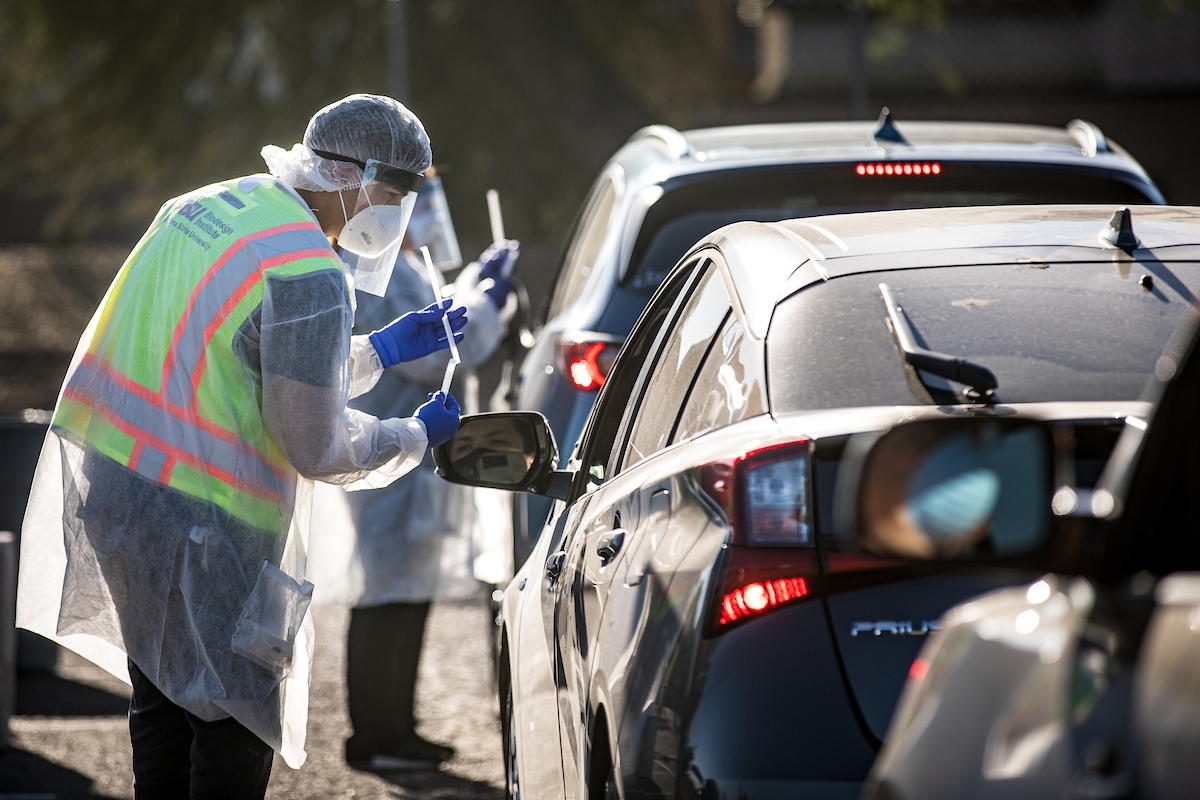 Medical community volunteers give instructions on using the straws and vials for collection at the free saliva-based tests July 18, 2020, at Ak-Chin Pavilion in west Phoenix. In addition to the on-campus COVID-19 testing operations, there were  71 public testing sites around Arizona that were designed by ASU and administered by the Arizona Department of Health Services. Photo by Charlie Leight/ASU News

When the Biodesign team was ready to deploy everything, an email was sent out on a Friday asking for volunteers. Several hundred responded within hours. By the end of the weekend, several hundred more had responded.

And it was a multi-departmental effort. Twenty-eight ASU departments and units were involved in the testing operations, from purchasing to parking to safety support services.

More than 50 people worked each test site at any given time. More than 220 staff supported the Environmental Health and Safety testing-location functions. And almost 850 Edson College of Nursing and Health Innovation students also supported the efforts.

The testing efforts benefited not only individuals, but critical services such as public utilities. In late August, the state’s largest public utility presented ASU with its inaugural APS Arizona Partner Award in recognition of its efforts — especially in the early months of the pandemic.

“I remember telling my colleagues ... ‘Oh yeah, we started testing for COVID in early April.’ They were like, ‘How in the world were you able to do that?’” Arizona Public Service CEO Jeff Guldner said at the award ceremony.

Breanna Carpenter, assistant director of ASU Research Enterprise, and Marcus Jones, assistant director for special projects at the College of Health Solutions, were instrumental in organizing the logistics for the large-scale testing efforts before the vaccinations began.

“… Our lessons and work on the testing then lead Marcus and I to lead the vaccination initiatives, where we used our same models and adapted what we needed to administer over 1.7 million vaccine doses to hundreds of thousands of individuals. In January 2021, Marcus and I set up the first state-run, 24-hour vaccination site in the country … in five days.”

Their efforts were recognized by President Joe Biden during a virtual tour of the State Farm Stadium vaccination site.

“We really are leaders for the entire country,” Phoenix Mayor Kate Gallego said at the time. 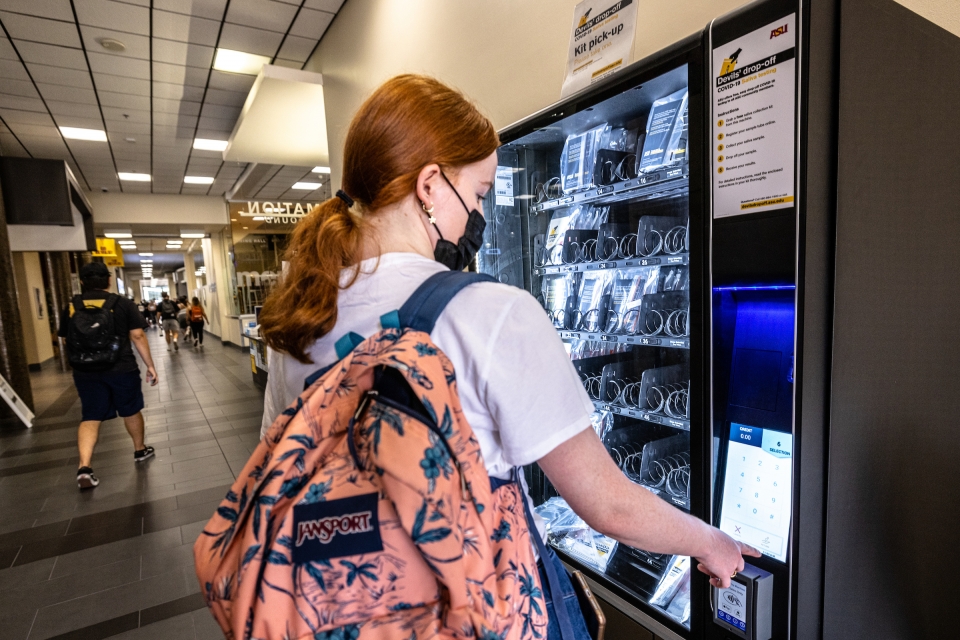 Kayla Prendergast, a second-year student in business management, checks out a Devils' drop-off vending machine at the Memorial Union on Aug. 30. The self-serve saliva test kits are the latest phase of ASU's COVID-19 testing efforts. Photo by Charlie Leight/ASU News

A $2 million donation in emergency grants from the Virginia G. Piper Charitable Trust vastly increased efforts to coordinate responses to the pandemic. The grants supported the university’s work in three areas:

David Thomas, CEO of ASURE (ASU Research Enterprises), said a team of people from ASURE who had experience developing standard operating procedures went to work as soon as they got the call.

“We deal with standard operating procedures all the time. So, this is familiar turf for us,” Thomas said. “I got the call on a Saturday morning. On Sunday, we were visiting sites, and we executed our first COVID-19 testing site on Wednesday or Thursday the following week. Literally, within one week we stood up the very first test site.”

Thomas worked as the operations lead for nearly 40 testing sites.

Testing sites were spread out across the state, from the Navajo and other Native American communities in northern Arizona to Maricopa County, Pima County and beyond. Community partners, including the Arizona Department of Health Services, State Farm Stadium, Tempe Diablo Stadium and Ak-Chin Pavilion joined the effort to provide the public with COVID-19 saliva testing locations, including in Tucson and northern Arizona.

The Arizona Department of Health Services committed $12.7 million to ASU to increase testing. ASU launched several sites in high-need underserved communities around the state. The contract was extended multiple times.

The federal government supported the university’s efforts with a $4.7 million National Institutes of Health grant to boost testing in underserved communities around the state.

ASU identified “testing deserts” in Arizona based on epidemiological data from the state, and then provided 29,000 tests as part of an intensive outreach and follow-up effort, led by the Equality Health Foundation. Communities included Maryvale, South Phoenix and Yuma. Health workers from each community were trained by the Biodesign Institute’s Clinical Testing Laboratory to facilitate the saliva tests. People who tested positive received medical care, education on how to keep themselves and their families safe, and food, housing and employment assistance, if needed.

“I feel very proud,” Carpenter said. “I feel grateful to be part of an institution that stepped up and utilized its resources to help its community, even when it didn’t have to, and I feel thankful that I was in a position to use my skills in a way that was beneficial to the work to save lives.”

Testing by the numbers 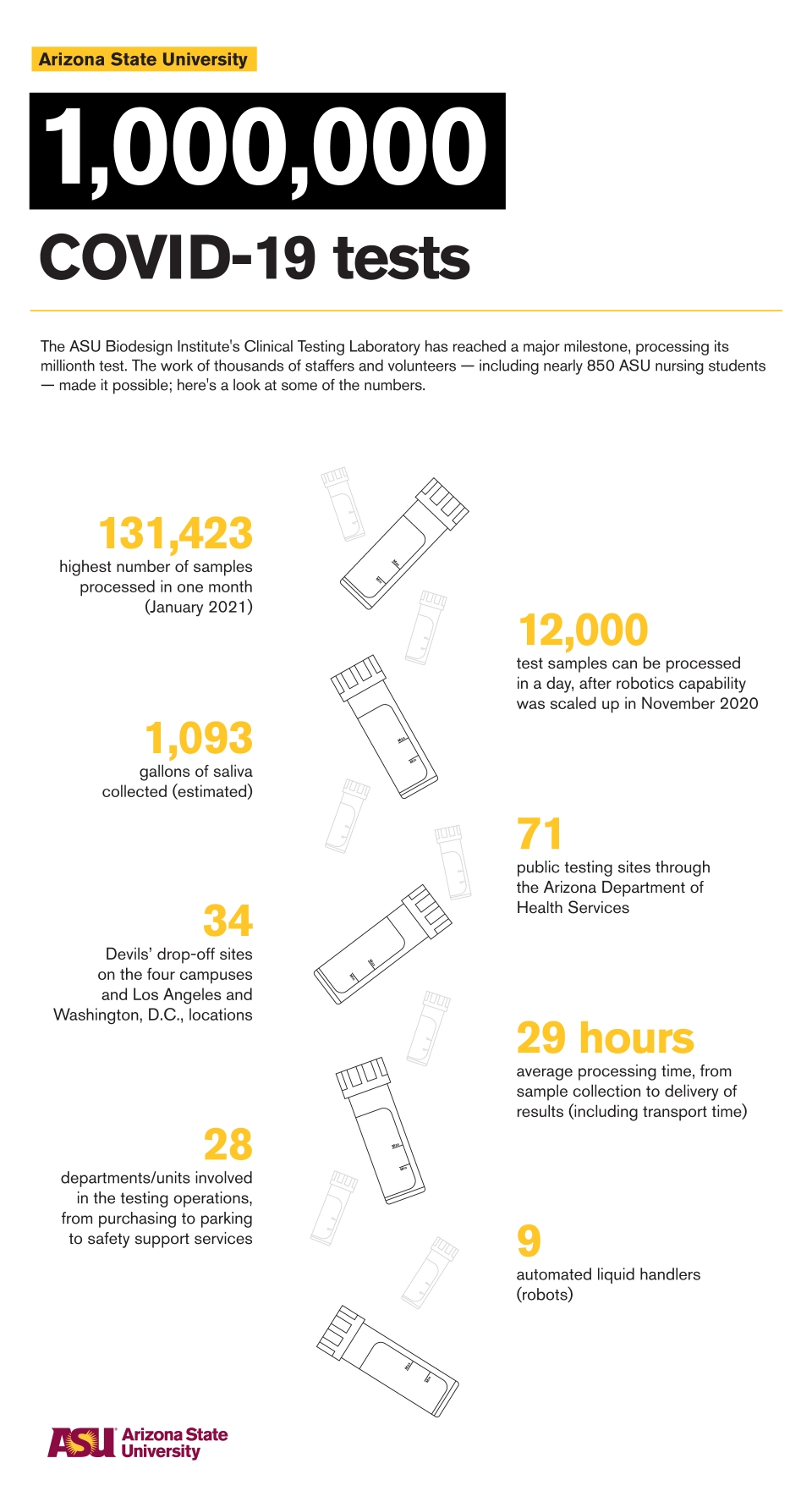