A micrometeorite, called TAM19B-7, may have originated from a Ceres-like asteroid, according to a recent study conducted by researchers Maitrayee Bose and Victoria Froh of Arizona State University, Martin Suttle of The Open University, U.K., and Luigi Folco, of the University of Pisa, Italy.

They will be presenting the results of their study at the 53rd annual American Astronomical Society’s Division for Planetary Sciences conference, being held virtually Oct. 3–8. 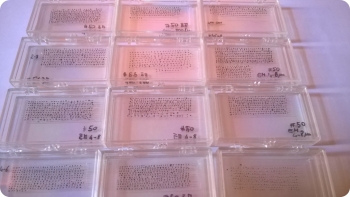 Curated micrometeorites recovered from Antarctic sediments. Typically there are about 200 micrometeorites per container. These particles originate from a huge diversity of small bodies, both asteroids and comets. Photo by Martin Suttle Download Full Image

Micrometeorites are tiny grains of cosmic dust, less than 2 mm (0.08 inch) in size. They can originate from both asteroids and comets. Unlike meteorites, their larger counterparts, micrometeorites typically come from a much larger and more diverse population of solar system small bodies. By studying these samples, scientists can gain new insights into the composition and diversity of small bodies in the asteroid belt.

TAM19B-7 is the largest fine-grained, unmelted micrometeorite found and analyzed to date. It was retrieved from sedimentary traps on the summit of Miller Butte in the Transantarctic Mountains during a 2006 expedition, funded by the Italian Programme for Antarctic Research (PNRA). Based on detailed laboratory analyses, co-authors Suttle and Folco proved that it is an unusual micrometeorite, and it does not appear to belong to any of the known classes of meteorites or micrometeorites.

“The particle is a member of the well-studied carbonaceous chondrite ‘super group’ but appears to be a new, otherwise unsampled population,” said Assistant Professor Maitrayee Bose of ASU’s School of Earth and Space Exploration, who led this study.

Dwarf planet Ceres, which this micrometeorite resembles, is the largest object in the asteroid belt, orbiting between Mars and Jupiter. In recent studies, scientists using data from the NASA Dawn mission found Ceres’ surface to be a mixture of water ice and hydrated materials such as carbonates, chlorides and clays.

In this study, Bose and undergraduate student Froh analyzed TAM19B-7, which they call “a giant among the tiny,” using the ASU-based NanoSIMS (Secondary Ion Mass Spectrometer) instrument to measure carbon isotopes in the micrometeorite.

Specifically, they found the micrometeorite’s isotopic composition to be enriched in heavy carbon 13. These heavy carbon 13 enrichments are characteristic of meteorites that have been affected by interaction with water and led to the production of carbon 13 enriched carbonates. These reactions occurred on the asteroid parent body approximately 4.5 billion years ago, which is soon after they were formed. This may help scientists understand the conditions on asteroids during the age of planet formation.

Images of micrometeorite TAM19B-7 before and after "slicing." Image by Martin Suttle

“Despite the remarkable chemical similarities between TAM19B-7 and salt deposits on the surface of Ceres, we are not proposing that TAM19B-7 originated from Ceres. Rather it provides a window into the solar system materials that are missing from our collections of known meteorites,” Bose said. “Micrometeorites like TAM19B-7 provide crucial missing links in our understanding of the diversity of ultra-hydrated asteroids like Ceres.”

For next steps, Bose and her team plan to continue studying the micrometeorites in their collection to learn more about the potential role micrometeorites played in the delivery of volatiles to the early Earth.

“The contribution of micrometeorites to Earth’s geochemical budget is often overlooked because they are small and difficult to study,” Bose said. “However, their cumulative effect, over the eons, amounts to a huge mass input.”

How can the study of ancient texts lead to better understanding of contemporary issues around social equity, diversity and inclusion?The Theater of Difference project in Barrett, The Honors College at Arizona State University is helping students tackle these complex subjects through the reading of ancient Greek tragedies by Athenian playwright Euripides.“Our goal is to see how ancient texts can ...

How can the study of ancient texts lead to better understanding of contemporary issues around social equity, diversity and inclusion?

The Theater of Difference project in Barrett, The Honors College at Arizona State University is helping students tackle these complex subjects through the reading of ancient Greek tragedies by Athenian playwright Euripides. 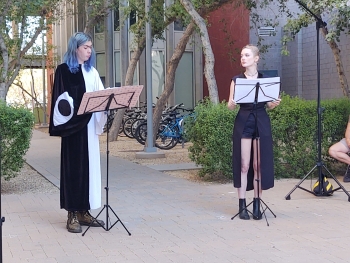 “Our goal is to see how ancient texts can help us illuminate, help us articulate and even help us work through contemporary issues, especially as they pertain to equity and inclusion,” said J.R. O’Neill, Barrett Honors faculty fellow, who is leading the project.

“We also aim to recognize and celebrate difference, learn to avoid conflict and understand our implicit biases,” O’Neill added.

The Theater of Difference, which is part of the honors college’s overall efforts to encourage dialogue about diversity and inclusion, started last spring with an honors course focusing on Euripides’ "Medea," featuring the main characters of Jason and Medea, and various themes including passion, rage, betrayal, revenge, discrimination and pride.

Students spent the semester reading, discussing and interpreting the play, and they capped off the course with a staged performance last April in the outdoor amphitheater at Barrett, The Honors College’s Tempe complex.

The Theater of Difference is continuing in spring 2022 with a course on Euripides’ "Bacchae," which includes themes of xenophobia, sexual difference and gender identity.

O’Neill said a staged reading of "Bacchae" is planned for next April.

“I think that the most vital thing we can take away from the performance of texts like this is looking into and critically examining what might be resounding in a modern context. If Medea holds a mirror up to modern society, what about that reflection is too close to reality for comfort?” said Bronwyn Elizabeth, who played Jason in the honors college's performance of "Medea."

“Reading as Jason, I felt incredible discomfort, particularly speaking lines about his perception of what civilization is, and how his preconceptions about other cultures are rooted in a fundamental sense of nationalism and xenophobia. The reason this struck such a chord in me is because we see these sentiments echoed by bigoted people in nearly every facet of American society,“  she said, pointing out how many people, including politicians, weaponize such words as “illegal,” “citizen” and “civilized.”

"Having to play a character so deeply rooted in his own privilege caused me to reexamine mine. What about my privileged position in society would enable bigotry, and how do I do the work to dismantle that?”

Andrea Yang, who performed as a member of the chorus, said themes of gender identity and discrimination stood out to her.

“We can view many of these themes reflected in our modern society. From anxieties about immigrants who are coming to 'steal our jobs' to how we stereotype women, these themes continue to be significant, which is what makes this play so enduring,” Yang said.

Hugo Crick-Furman, who played the title character Medea, said the play points up the complexity of societal issues.

“This is such a rich text, it's difficult to pinpoint any themes as being the most important. The most relevant though, I think, are the themes of foreignness and gendered relations and discrimination. I think that one thing that can be taken from the play is the value of coalition-building in the face of discrimination,” Crick-Furman said.

Laura Spielvogel served as dramaturg for the play. Her role was to become well-versed on the play — its characters, themes and meaning — in order to assist the actors in interpreting the play and developing their characters.

“Issues of gender equality, xenophobia and classicism are still around. They live in our social media newsfeed, sometimes much to our discomfort or even our grief. Increasingly — and thankfully — we are beginning to see that these things are our problem, not the problem of these identities by themselves. In that way, when we enter the theater, we are not only coming to see the story of Medea and Jason, but the story of ourselves, and hopefully we leave the theater ready to write a new and better page of the human experience,” she said.