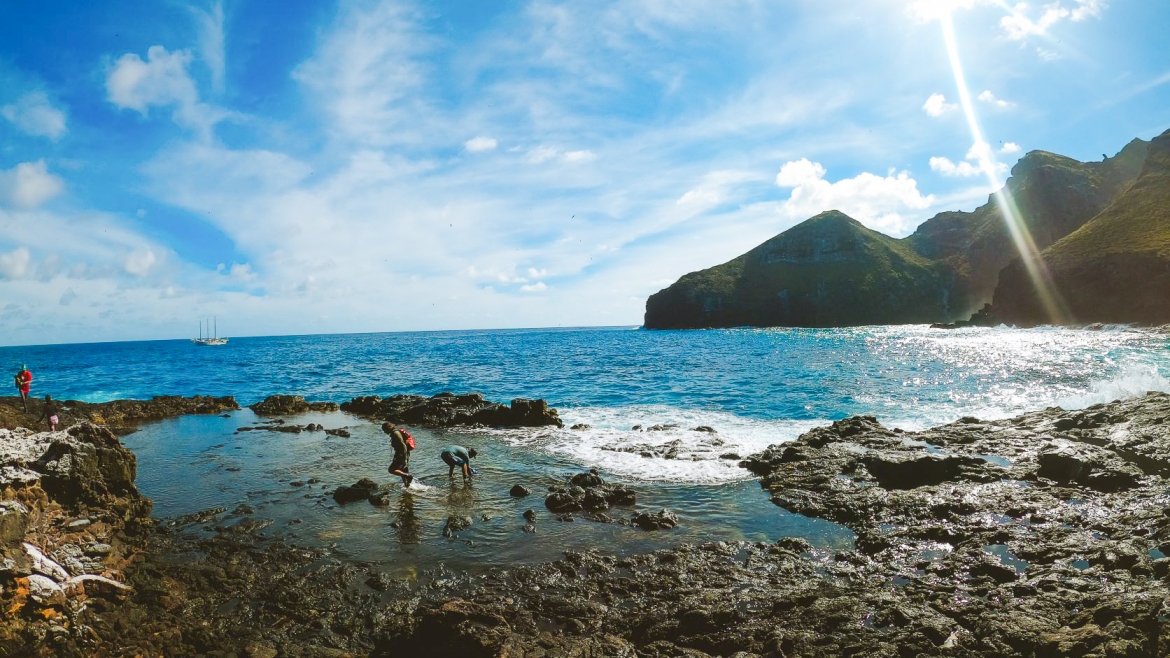 It took Haunani Kāne and her team of researchers four days at sea to reach Papahānaumokuākea Marine National Monument, a time that could have easily been cut in half if they used a typical research vessel.

But they chose to travel by sailboat — an important part of incorporating the all-Native-Hawaiian scientist team’s ancestral history into their research.

“Typically, when you go out on a research boat, it’s a big ship and you burn a lot of fuel, there’s a large crew and everything is really tailored to conducting research,” said Kāne, whose research combines coastal geomorphology with spatial analysis to understand how islands, reefs and people are impacted by climate change. “But as Hawaiians we’re voyaging people, we're sailors. That's how we came to Hawaii. So, we wanted our crew and our students to experience that too.”

This August, Kāne, assistant professor in Arizona State University’s School of Geographical Sciences and Urban Planning and the Center for Global Discovery and Conservation Science, organized and led the first research team entirely composed of Native Hawaiians that would conduct climate and sea-level rise research in Papahānaumokuākea under a research permit.

“When we were planning this trip, it started as a research trip to go up there to understand the impacts of climate change and the impacts of storms and sea-level rise, but it grew into something much larger,” Kāne said. “It grew into this dream of what would it look like to do research in a really sacred place in a Hawaiian way with a group of Hawaiians.”

With boundaries starting 150 nautical miles northwest of Honolulu, Papahānaumokuākea is one of the world's largest protected areas. A World Heritage site and a U.S. national monument, Papahānaumokuākea encompasses nearly 600,000 square miles of ocean waters, including 10 islands and atolls of the Northwestern Hawaiian Islands. Papahānaumokuākea is also highly respected amongst the Hawaiian community and a place of Native Hawaiian ancestral connection.

“Papahānaumokuākea is one of the most sacred places for us as Hawaiian people," Kāne said. "We believe that it's about Ao ʻaumākua or place. It's the realm of our ancestors, and we live in the larger islands where it's the realm of kānaka ʻōiwi or people, so in order to access it, you have to apply for a lot of permits for cultural reasons.”

Kāne and her research team traveled to the national monument to better assess the impacts from the hurricane and understand how species, plants and land were affected by the storm.

“We wanted to study the impacts as well as the recovery and the ways in which the islands are naturally recovering,” Kāne said. “Because there's no people there and there's a lot of really important resources and endangered species, it was an opportunity to understand how nature recovers on its own.”

Over the course of a week, the team, using high-resolution GPS, mapped the delicate area to get a clearer picture of how sea-level rise has influenced the size and the shape of the islands, some of which are only a few meters tall.

Additionally, the team conducted 3D mapping and shallow reef environment surveys to assess recovery of the reefs and collected sediment and sand samples, to better understand the composition of the islands.

“All the material comes from the reefs themselves; there really isn't much soil or volcanic, rocky material,” Kāne said. “So, we're trying to understand what parts of the reef contribute to the island and assist in the recovery of the islands.” 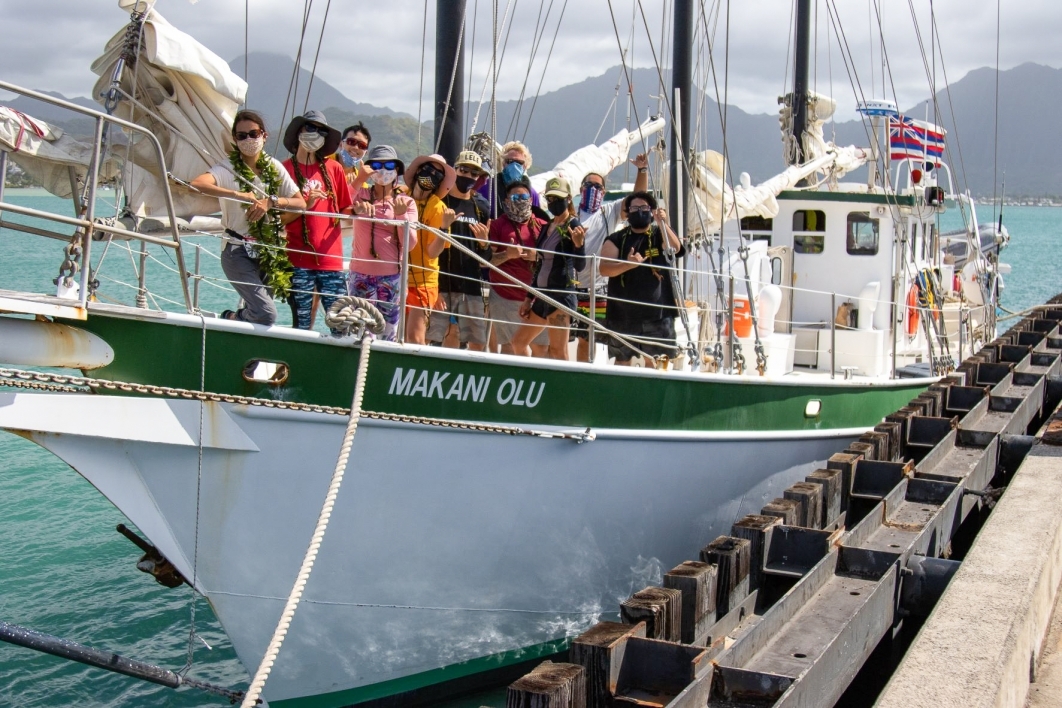 As part of their research, the team — using high-resolution GPS — mapped the delicate area to get a clearer picture of how sea-level rise has influenced the size and the shape of the islands, some of which are only a few meters tall. 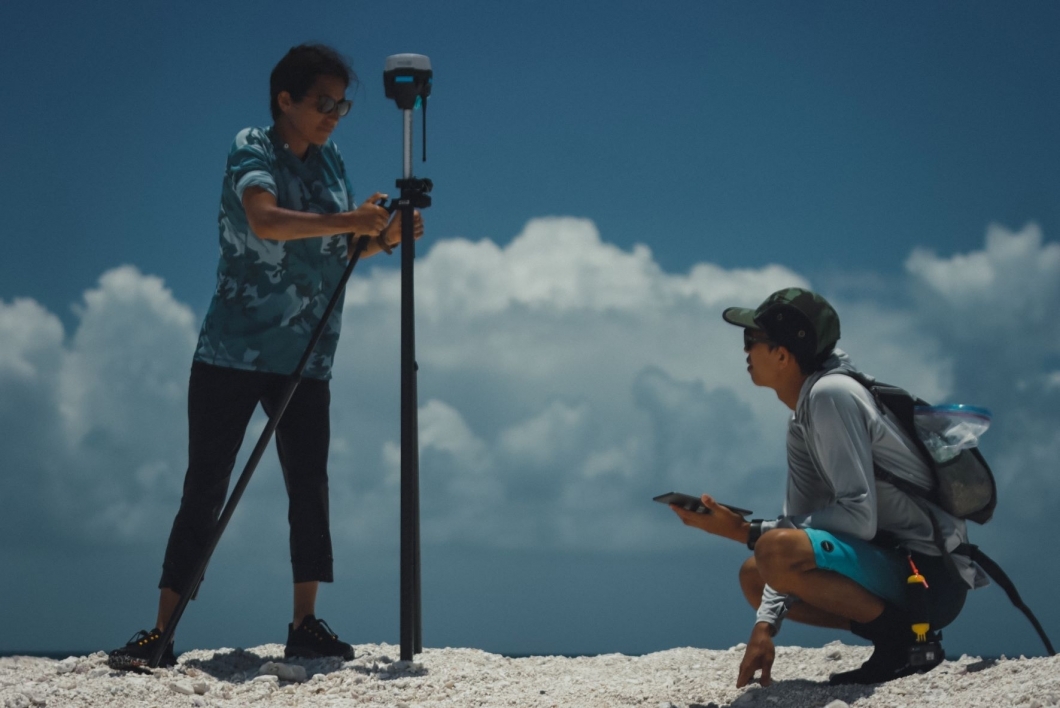 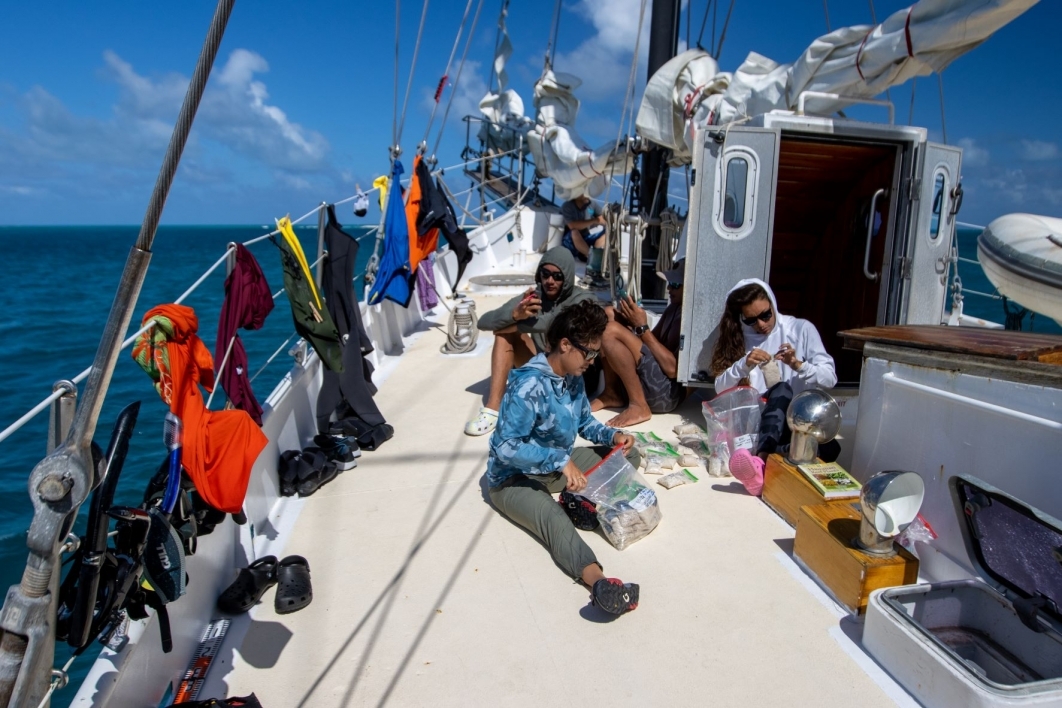 The research team collected sediment and sand samples, to better understand the composition of the islands. 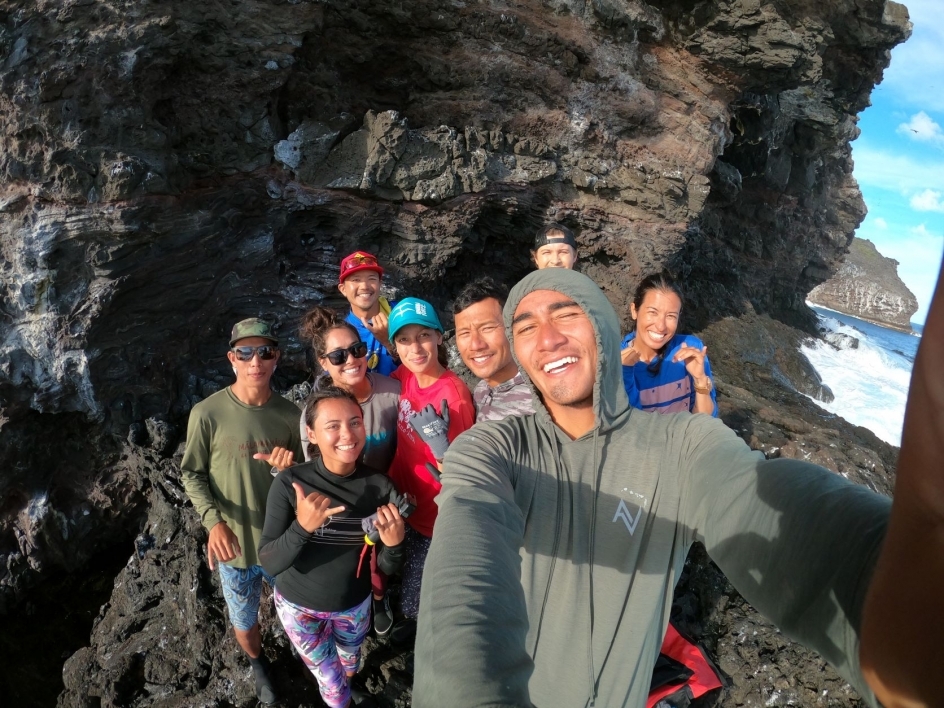 Kāne (far right) hopes these activities can serve as a model of what’s possible in pushing boundaries and raising Hawaiian voices in their field.

A Hawaiian approach to research

Critical to their research at Papahānaumokuākea, the team interwove Native Hawaiian culture and traditions that centered on a mindset of deeper connection with place and the natural world beyond sight.

When entering new spaces and approaching new islands, the researchers offered prayer or pule, and song or mele.

“We would introduce ourselves in that way; it would help our thinking and our mind to get ready to go out and to do our research and our work,” Kāne said.

A big outcome of the trip, Kāne adds, was not only having the opportunity to participate in Native traditions but to learn them and introduce them to Native researchers that may not be as familiar, comfortable and confident in them.

“Not all of us grew up where we learned these traditions,” Kāne said. “It's an evolving process that we're all learning together on what we're comfortable with but also pushing a little bit of that discomfort on relearning our language and learning these songs and these prayers or even getting creative with it as well.”

“I think that our fields have not yet evolved to truly feel like a comfortable safe place for Native people,” Kāne said, who in 2019 became the first Native Hawaiian woman to receive a doctorate in geology from a Hawaiian university. “A lot of times we are asked to separate our culture from our science, when culture and science are grounded — there's so much overlap.

“For us, especially in the fields that are most important to us as Native people — earth sciences, atmospheric sciences, ocean sciences, all the elements that we truly value — science is our culture, and I wanted to create a safe space for our students to conduct research and truly feel that.”

Kāne hopes research trips like this are just the start of what can be accomplished with more students in the future and is continuing to explore opportunities to incorporate traditional Hawiian knowledge and values in her teaching at ASU.

She says whether that is through creating a new class or taking a fresh approach in research with ASU’s Center for Global Discovery Conservation Science which is based in Hawaii, she hopes these activities can serve as a model of what’s possible in pushing boundaries and raising Hawaiian voices in their field.

“I hope that my students, through these experiences, don't feel like they need to be confined in a box and have to fit this specific mold of whatever that mold may be for as a scientist,” Kāne said. “I hope this trip can inspire creativity in them, confidence in them and just a little sense of being proud to be a Native, a Native person in science.”

Jordan Sinclair, who hails from the University of Delaware, joined Arizona State University's School of Molecular Sciences, a unit of The College of Liberal Arts and Sciences, as a PhD student last month.“I was looking for a program that checked all my boxes as completing a PhD is one of the largest commitments a person can make,” Sinclair said. “It’s like a tier under marriage, getting a...

Jordan Sinclair, who hails from the University of Delaware, joined Arizona State University's School of Molecular Sciences, a unit of The College of Liberal Arts and Sciences, as a PhD student last month.

“I was looking for a program that checked all my boxes as completing a PhD is one of the largest commitments a person can make,” Sinclair said. “It’s like a tier under marriage, getting a tattoo or buying a house.” “Assistant Professor Christina Birkel, my choice of PhD adviser, has cultivated a research space I find very versatile. Her focus is on nanomaterials, solid-state chemistry and synthesis. The fact that these fields can blossom into so much more is an absolute dream for me as a researcher because I can have free rein with my work.”

In this age of machine learning and data-driven research, a plethora of possible materials are being investigated, but synthesizing them in the lab, especially in the solid state, is often anything but straightforward.

Sinclair wants to attack the problem of finding alternative energy sources and materials. The technological needs of our society are greatly outpacing the capacity and capability of current materials. Each year companies like Apple, Tesla and Intel have to expend lots of effort to match public demand and the cost of manufacturing products.

Sinclair wants to contribute to the synthesis of largely commercializable and efficient materials. Producing solid-state materials for batteries, computers and other products is a rapidly growing field especially since their manufacturing costs are decreasing significantly.

“I chose SMS because of the limitless and invaluable opportunities for collaborations both within SMS and across ASU as a whole. Other schools across the nation are often times very myopic,” Sinclair said. 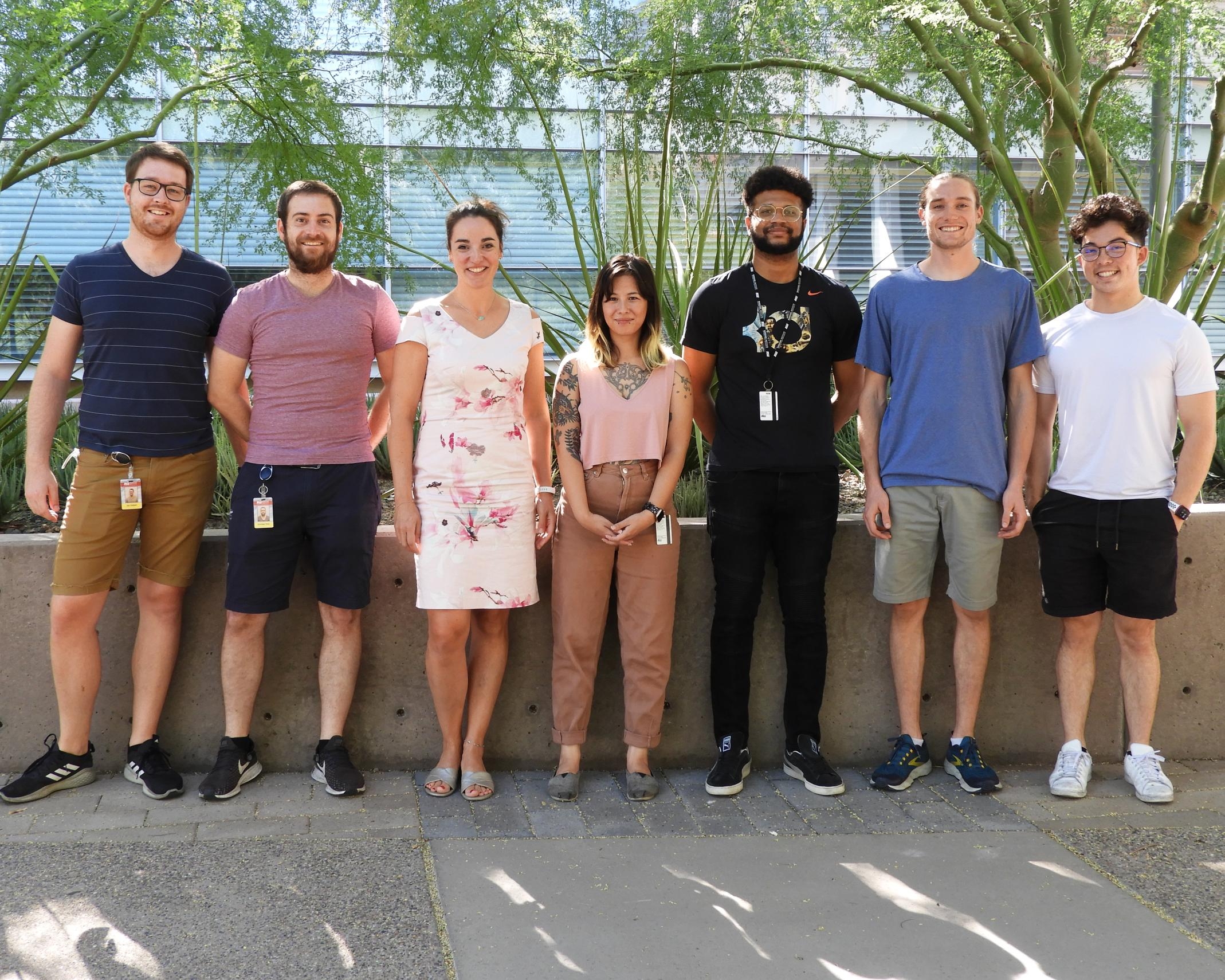 When it comes down to pinpointing the specific moment that sparked Sinclair’s interest in the sciences, he says it was during his elementary school days. From a young age on visits with his father, he observed the process of producing silica-based gels in their entirety at the Huber Corporation. His father’s lab performed many other reactions that inspired him, including high-pressure synthesis.

Sinclair says that starting his undergraduate years at the University of Delaware, he immediately chose to major in chemistry almost impulsively. Despite his extracurricular difficulties he wanted a challenge, he wanted rigor and he wanted to build upon the already strong foundation of his primary education.

Sinclair was awarded the C. Frank Shaw lll Undergraduate Inorganic Research Fellowship last year by the University of Delaware in recognition of his outstanding achievements in inorganic chemistry. Sinclair’s research in Professor Svilen Bobev’s (University of Delaware) lab has resulted in a first-author paper titled "Synthesis and structural characterization of orthorhombic Cu3-xSb (x~0.13 (1)) and hexagonal Cu3Sb-based phases," which has been submitted to the Journal Zeitschrift fur Kristallographie.

Last month the School of Molecular Sciences welcomed its new class of 38 graduate students (30 PhDs and eight master's degree students). They are a diverse group from 11 states in the U.S. as well as Bangladesh, Cameroon, China, Ghana, India, Indonesia, Korea, Nigeria, the Philippines, Sri Lanka and Turkey. The students have just completed an extensive two-week teaching assistant training, learning about the instructional philosophy of the school. They are currently embarking on their next set of challenges: finding and settling into a research lab and deciding on a research topic.