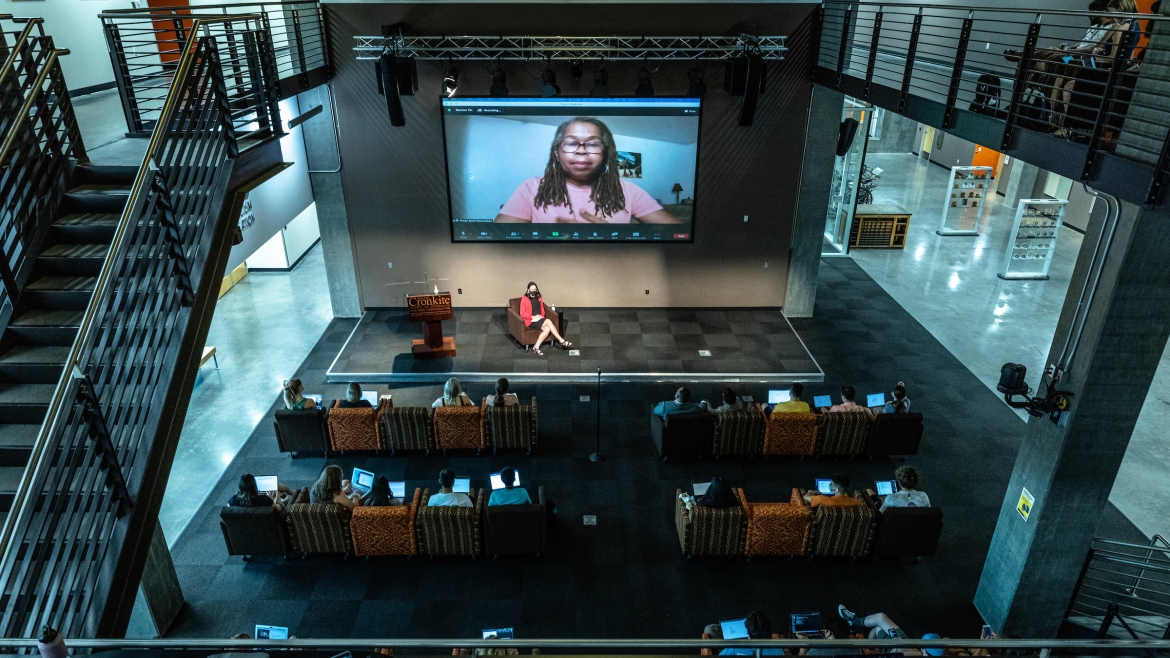 Susan Smith Richardson, a nationally recognized journalist and media industry leader, said news organizations can support and improve reporting on communities of color by ensuring that their newsrooms are fair and equitable places to work.

“First and foremost, we have to scrutinize our own biases and know they exist,” said Richardson, who was named the inaugural Ida B. Wells Professor in Journalism at the Walter Cronkite School of Journalism and Mass Communication at Arizona State University in April. “We have to look at the systems and structures in place that disadvantage some and advantage others. … I always argue that a transparent organization has transparent job openings, has transparent criteria for being promoted, has transparency for being hired. These things help people of color and people who have historically been underrepresented — but they also help the entire newsroom get better.”

Richardson’s Sept. 20 talk was part of the fall 2021 “Must See Mondays” lecture series hosted by the Cronkite School in the First Amendment Forum on the Downtown Phoenix campus. Richardson joined the livestreamed event via Zoom from New York, where she is based.

Her Cronkite School position was created in honor of Wells, an African American investigative journalist, educator and early leader in the civil rights movement. This fall, Richardson is teaching media leadership and transformation to Cronkite School graduate students, and, in spring 2022, she will teach an advanced reporting class for undergraduate and graduate students.

"The legacy of Ida B. Wells endures and continues to inspire young and veteran journalists alike,” said Senior Associate Dean Rebecca Blatt, who served as moderator at Monday's event. “I look forward to honoring that legacy and discussing its relevance to the racial justice movements of our time.”

Blatt and Richardson spent the first portion of the evening discussing the importance and impact of Wells’ reporting and legacy.

“Without dispute, (Wells) was one of the most important journalists of the late 19th and early 20th centuries,” Richardson said. “Her work is so important because her campaign against lynchings did two things: It exposed the misinformation about the causes of lynchings, and it also documented the widespread nature of lynchings as a form of terror. This, in its earliest form, is investigative journalism.” 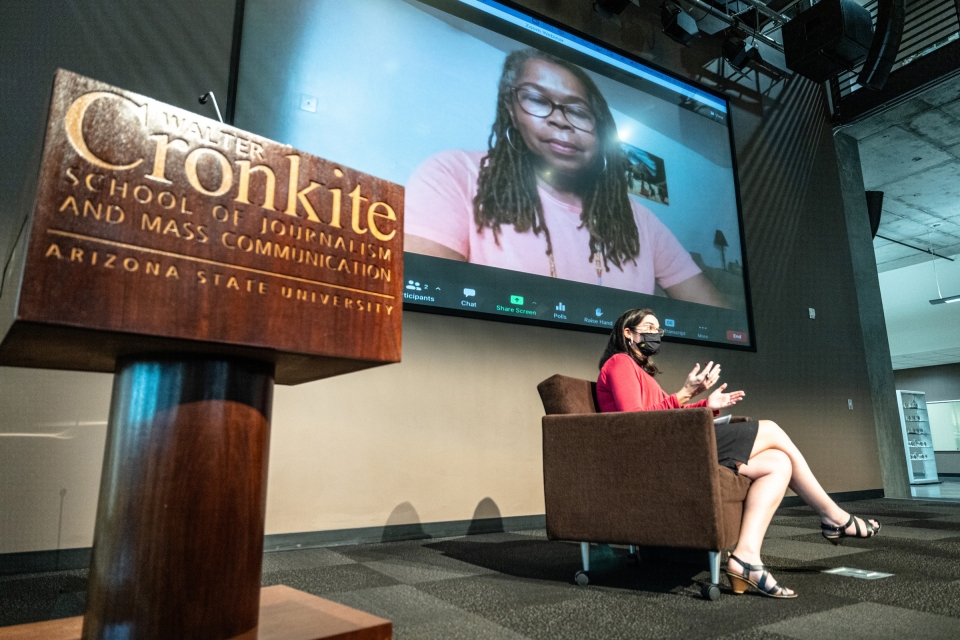 Susan Smith Richardson, deputy editor of The Guardian US and the first Ida B. Wells Professor in Journalism, talks with Senior Associate Dean Rebecca Blatt (seated) during a Must See Mondays event,Sept. 20, at the Walter Cronkite School of Journalism and Mass Communication. Photo by Charlie Leight/ASU News

The discussion quickly turned to Richardson’s career, which she said dates back to the late 1980s.

Richardson is currently the deputy editor at The Guardian US, where her responsibilities include diversity, equity and inclusion efforts as well as developing coverage on race, identity, power and inequality. She is also working to develop collaborations between the British news company and the Cronkite School.

She has been a senior manager and editor at some of the nation’s top media outlets. She was chief executive officer of the Center for Public Integrity in Washington, D.C., a leading nonprofit investigative journalism organization, and editor and publisher of The Chicago Reporter, renowned for its coverage of race, poverty and income inequality. She also served as editorial director of the Solutions Journalism Network, a nonprofit organization that advocates a solutions-based approach to reporting on social problems. Earlier in her career, she worked as assistant metro editor of the Chicago Tribune, managing editor of The Texas Observer and senior writer at the MacArthur Foundation.

Richardson said journalism can’t be disconnected from serving communities and that critical issues must be identified and given voice.

“We’re having a renewed conversation about our relationship with communities in a deeper and more meaningful way,” Richardson said. “Our responsibility as a group of professionals with the big ol’ megaphone is to really cast light on some of the issues that society would rather ignore.”

“There is no final destination when it comes to creating a representative and inclusive newsroom where people feel a sense of belonging,” Richardson said. “That is a 24/7, 365-days-a-year work. You never stop because the goal is never reached. And if you think you could hit a point, then you’re wrong.”

Richardson said good journalism starts with a conversation or hypothesis in the newsroom so that when a story breaks, the reporter is equipped with the knowledge to report on a story with depth and clarity. She added that the best investigative stories that catch on with the public usually have elements of intersectionality. Richardson pointed to a story she wrote on a prison bus service that included issues surrounding transportation, economics, race, gender, equity and class structure.

“Over time what I’ve learned as a journalist is that if you pull the thread, even gently, you’re going to see that it connects with something that you think is unrelated,” Richardson said. “All issues are connected to a system, and systems imply there’s an interconnection between issues. … If we’re reminded of that, then I think as reporters we’re all prepared to cover things more comprehensively.”

As for the future of the journalism, Richardson believes it will be bright and that she and her journalism students will help figure it out.

“If you want to be in a learning environment, you get in an environment with another generation,” Richardson said. “They’re very much a part of shaping it. So how they view and shape the world and see journalism is a way for me to get educated as well. It’s a two-way street.”

Top photo: Susan Smith Richardson (on screen), deputy editor of The Guardian and the first Ida B. Wells Professor in Journalism, talks with Senior Associate Dean Rebecca Blatt during the Must See Mondays event Monday, Sept. 20, in the First Amendment Forum in the Walter Cronkite School of Journalism and Mass Communication in Phoenix. Among the topics covered, Richardson discussed how news organizations can support and improve reporting on communities of color. Photo by Charlie Leight/ASU News

Summer’s heat and sun can push the surface temperature of city streets in Phoenix as high as 180 degrees Fahrenheit. Those streets then stay hot long after the sun goes down, radiating their built-up energy back into the night air, making the next morning hotter, in an ongoing cycle. If you’ve ever owned a black vehicle, you know it gets hotter than a white or silver vehicle when parked in th...

Ira A. Fulton Schools of Engineering , Herberger Institute for Design and the Arts , School of Arts, Media and Engineering , COVID-19 research and resources 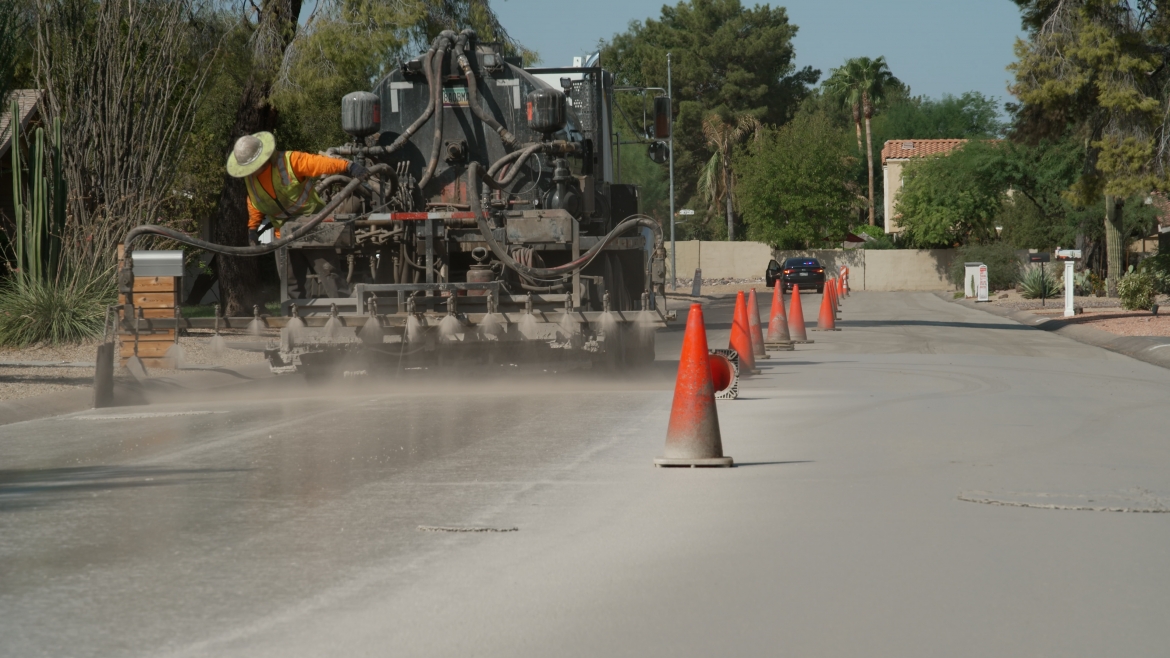 Summer’s heat and sun can push the surface temperature of city streets in Phoenix as high as 180 degrees Fahrenheit. Those streets then stay hot long after the sun goes down, radiating their built-up energy back into the night air, making the next morning hotter, in an ongoing cycle.

If you’ve ever owned a black vehicle, you know it gets hotter than a white or silver vehicle when parked in the sun. Scientists at the Lawrence Berkeley National Laboratory found that difference between dark and light-colored vehicles can be 10 degrees Fahrenheit or more.

The same is true for the pavement we drive on. Lighter, more reflective surfaces will stay cooler than darker ones. But could that difference be enough to make an entire neighborhood cooler and more comfortable?

Roadway engineers with the city of Phoenix put a team of Arizona State University researchers to work to answer that question. A yearlong joint study by the city and ASU applied a reflective gray treatment called CoolSeal to 36 miles of neighborhood roads and a parking lot. After months of measurements, sometimes on days as hot as 116 F, the team has some answers.

The scientist’s unique tool to get this value is a garden cart, nicknamed “MaRTy.”

“The cart has meteorological sensors, and we can wheel it from place to measure the heat load that the body experiences from the sun. It’s a value called mean radiant temperature — MRT — and that’s where MaRTy’s name come from.”

Data collection demanded miles of walking pulling MaRTy, driving streets in an SUV loaded with sensors, and sometimes even hanging out of helicopters, and hand-held infrared thermometers.

“Looking specifically at the radiant temperature in the neighborhood, we did vehicle traverses that measured the air temperature distribution, and then we also did helicopter overflights to take surface-temperature photos of those neighborhoods, and compare the cool pavement neighborhoods to the ones with the regular asphalt,” said Middel, an assistant professor in both the School of Geographical Science and Urban Planning, and the School of Arts, Media and Engineering.

Surface temperatures of the roads with the reflective CoolSeal layer stayed cooler than non-treated streets at all times of the day; as much as 10 to 12 degrees cooler at noon, and almost two and a half degrees cooler at sunrise.

The team also took measurements of the air temperatures 6 feet above the surfaces. Here, the differences were not as dramatic. During the daytime, the CoolSeal dropped the air temperature by an average of just 0.3 degrees Fahrenheit. Nighttime temperatures improved a bit more, averaging 0.5 degrees cooler. 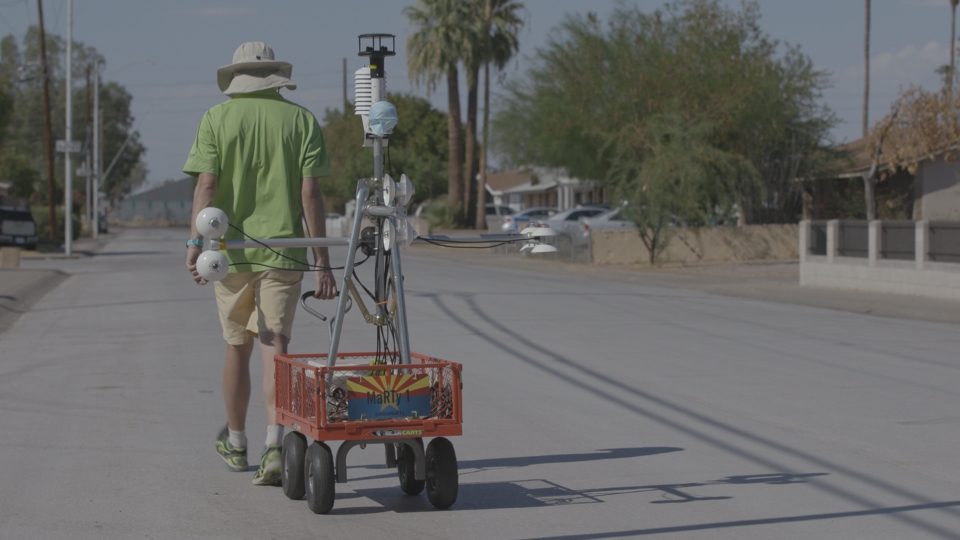 A cart outfitted with metrological sensors helped the team measure mean radiant temperature, or the heat load that the body experiences from the sun, in neighborhoods where the cool pavement coating had been applied.

MaRTy’s readings were among the most important in the study. The array of sensors on the carts found the human experience of heat exposure at noon and the afternoon hours was 5.5 degrees Fahrenheit higher due to surface reflectivity, but similar to walking on a typical concrete sidewalk.

“If you’re standing over one of these surfaces on a hot day, you’re still going to be hot if you’re not in the shade,” said Jennifer Vanos, an assistant professor in the School of Sustainability who worked on the study. “So if we really want to be pushing towards true solutions to the heat problems, it's not going to be just paint all the streets white. You’re going to have to really keep thinking about shade, which Phoenix is doing. And then see, how does that interact with the shade, too? Which gets even more complicated than just the open surfaces.”

The city of Phoenix will begin a Phase 2 of the study in the months to come.