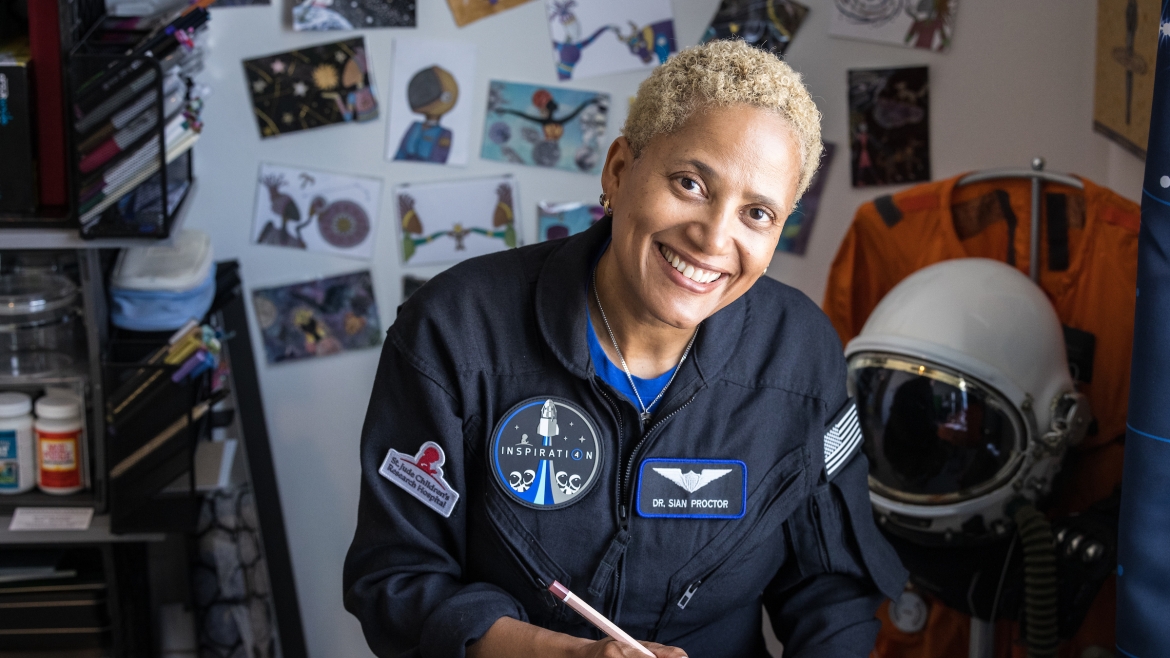 Proctor will be the pilot on SpaceX’s Crew Dragon mission Inspiration4, currently slated to launch Sept. 15. It will be the first spaceflight in history crewed completely by civilians.

“I loved just sitting on the mall with all the palm trees and just people watching,” she said. “It's such a beautiful campus.”

She rolled into the Valley in August 1994 in a hardtop black Jeep Wrangler with no air conditioning. She had been living in upstate New York, knee deep in snow and dreaming of a change in her life. ASU had given her the best deal out of the four schools she applied to, with in-state tuition and a job as a teaching assistant.

“I applied to grad school because I wanted to move out West and marry a cowboy,” she said. “I just remember driving down University (Drive) and the arch and the palm trees and just how beautiful the campus was, and I was so excited and happy to come here.” 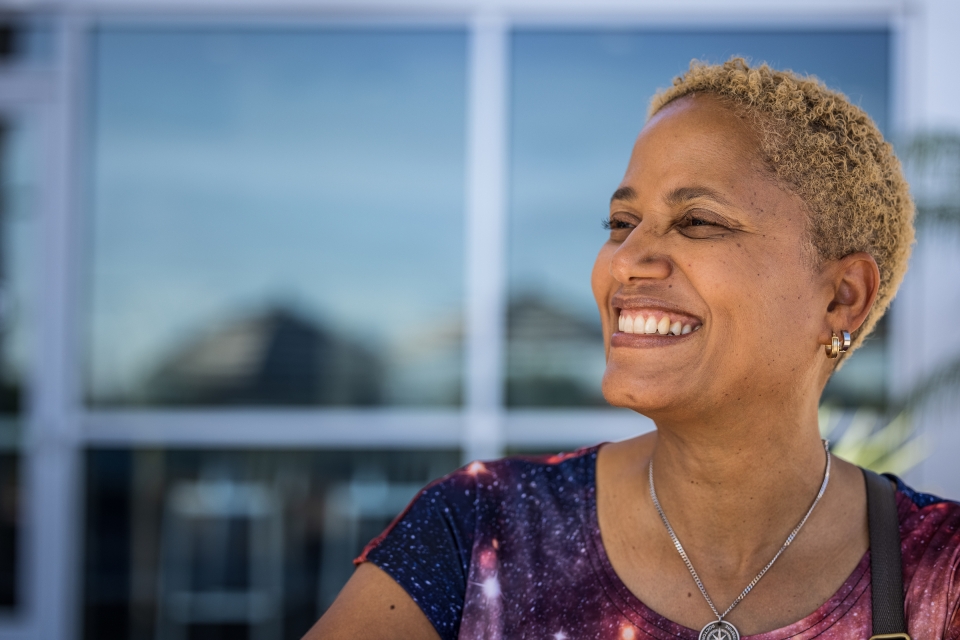 ASU alumna and adjunct professor Sian Proctor is gearing up for her fall 2021 flight as pilot on the SpaceX Crew Dragon mission Inspiration4 from her Tempe residence. She's originally from Guam, where her father worked on the Apollo lunar missions. The geoscientist and science communication specialist will join three other civilians on a three-day space mission. In addition to teaching, she is also an artist, poet, pilot, writer and served as captain of the ASU She Devils ice hockey team. Photo by Charlie Leight/ASU

Proctor wasn’t sure what she wanted to do.

“I walked in hesitant and unsure and walked out knowing that I wanted to be a college professor. Very cool,” she said. “After that first semester of teaching I had found kind of my passion.”

Steve Reynolds was her adviser. He had just started an education program within the geology program. He selected Proctor as his grad student to do the first educational-based master's degree in the geology department at the time.

It was not easy.

“I used to get notes saying, 'You belong over in the education department,' anonymous in my mailbox,” she said. “And just really interesting, you know, taking on cultural change. I'm pretty sure I’m the first Black female ever to go through the ASU geology program, the master's program. But I'm grateful for the opportunity, and people really stood up for me.”

Once she decided she wanted to teach, Proctor knew she needed to become a better teacher. It took her four years to get her master’s degree in geology (because she didn’t have a geology undergrad degree). She worked full time at South Mountain Community College and went to night school to earn her PhD. She was hired by Maricopa Community Colleges right away.

She is now a geology, sustainability and planetary science professor at South Mountain Community College. Recently she was appointed as an adjunct professor in the School of Earth and Space Exploration.

She’s also an artist, creating Space2Inspire Art to advance conversations about a JEDI (just, equitable, diverse and inclusive) space for humanity. Almost everything Proctor does can be traced back to her motto, “Space2Inspire,” which encourages individuals to embrace their unique strengths and passions.

Reynolds, a President's Professor in the School of Earth and Space Exploration, said he remembers first meeting Proctor when she came into his office and asked whether he would consider being her adviser.

“I always ask potential students what they want to be when they graduate,” Reynolds said. “She said she wanted to be the Black female equivalent of Bill Nye the Science Guy. I said, 'Let’s do that!' She greatly exceeded her original goal in her own way, including inspiring students in underrepresented groups when she was teaching in South Mountain college and now becoming an astronaut!”

Proctor was born on Guam in 1970 to a Sperry UNIVAC engineer who worked at the Guam Remote Ground Terminal, NASA’s tracking station, during the Apollo era. After the moon landings, Proctor's family moved to Minnesota and later to various Northeastern states while her father changed jobs. Her family moved to Fairport, New York, when she was 14, where she later graduated from Fairport High School.

NASA memorabilia was all over the house, and she wanted to be a military aviator. She flew in the Civil Air Patrol as a kid and wanted to fly F-16s. But when she got glasses at 15, she knew flying for the military was out. (Now you can get corrective surgery and be a pilot.) She gave up on her dream of being an astronaut. But when she was 38, someone said hey, NASA is looking for astronauts.

“I didn't know it was through USA Jobs,” she said. USA Jobs is the website where the federal government hires everyone from park rangers to White House gardeners to economists.

In 2009 she went through the astronaut selection process, competing against more than 3,500 applicants, and was chosen as one of 47 finalists. During the final round, she was not one of the nine astronaut candidates selected for the 2009 astronaut group. (Now she gives inspirational presentations about almost becoming an astronaut.)

I couldn't believe it. I think it was analogous to Harry Potter finding out he's a wizard. Like, I can't be a wizard. ... And then to be offered the pilot seat — that just added something extraordinary ... And so now I'm in the position where I'm going to be the first Black female pilot of the spacecraft ever.”

— ASU alumna and SpaceX pilot Sian Proctor, on getting the call that she was chosen for the mission

Undaunted, she became an analog astronaut, contributing to the advancement of human spaceflight, but here on Earth. She took part in a four-month NASA Mars simulation in Hawaii and projects in Chile and Alaska.

“I've been really fortunate to live in multiple moon and Mars simulations, which I believe has just helped prepare me even more for the mission ahead,” she said.

About that — the call from SpaceX was a shock.

“I couldn't believe it,” she said. “I think it was analogous to Harry Potter finding out he's a wizard. Like, I can't be a wizard. It's like, 'Ah, I'm going to be an astronaut!' OK. That's amazing. And then to be offered the pilot seat — that just added something extraordinary ... And so now I'm in the position where I'm going to be the first Black female pilot of the spacecraft ever.”

It was very welcome news to those who have known and worked with her.

“I’ve been privileged to know Dr. Sian Proctor as a friend and colleague for well over a decade,” said Meenakshi Wadhwa, director of the School of Earth and Space Exploration, “and I am so thrilled that she will be fulfilling a lifelong dream as part of the Inspiration4 mission. We are proud that Sian will be the first ASU alumna to go to space as part of this historic all-civilian mission.”

Proctor has done some training in the Dragon simulator. It’s nothing like flying a plane.

“You don't have the traditional yoke and stick and all that kind of stuff,” she said. “It's all digital displays, and the Dragon is autonomous. So it's designed to fly its mission through the flight computer. What me and my commander, Jared, who was also a pilot — our job is to monitor the systems and be prepared for any contingency.”

The Falcon 9 was designed to take cargo to the International Space Station without pilots. The autopilot steers and keeps course and altitude. On the mission they will orbit the Earth for three days, at the highest humans have gone in space since the Hubble Telescope was launched. The capsule is smaller than a single-occupancy dorm room. After the flight, they will reenter the atmosphere for a soft water landing off the coast of Florida. The mission aims to raise $200 million for St. Jude Children’s Research Hospital to help end childhood cancer.

“I feel so fortunate and grateful for the fact that everything that I've done in my life has led me to this moment,” Proctor said. “All of the preparation, all of the dreaming, all of the just exploring, but also really grateful for the people who have supported me on this journey. And I think that that's a big part of my space story.”

And ASU is part of that.

“The ASU that I went to and the ASU that is now are not the same, and I love it,” she said. “But, you know, I look at Tempe and I look at Arizona State, and it just makes me proud to be a Sun Devil.”

This is the third year the ASU chapter has earned this award since 2017. 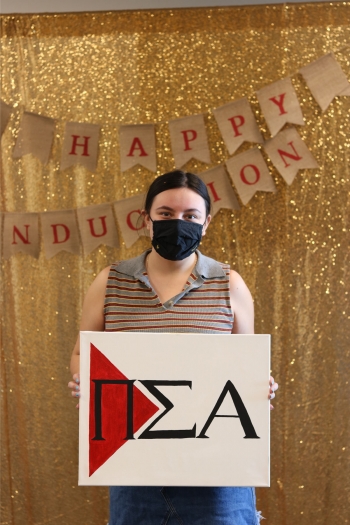 “We’ve had really fantastic student leadership organizing events that cater to student interests,” said Mark Ramirez, associate professor and faculty adviser. “We also made changes to how we reach out to eligible students who want to join Pi Sigma Alpha, which led to a dramatic increase in our membership.”

The Pi Sigma Alpha Honors Society awarded ASU this achievement in large part because of the chapter’s successful events and student professional development opportunities provided during the COVID-19 pandemic.

ASU political science and philosophy major Timothy Donnelly, who is also currently chapter president, said initially he pursued the honors society for professional purposes but found it to provided much more than that.

“The people are all similarly invested in their achievements and are happy to help each other succeed,” Donnelly said. “I came in not expecting much and getting back so much that it shocks me how lucky I am to have decided to jump in and join.”

The Pi Sigma Alpha student leadership welcomed new students to the honors society in their fall 2020 induction ceremony toward the end of the semester. Although most of the event was virtual, Anjelica Miller, the chapter president at the time, hosted a photo booth on the sixth floor of Coor Hall to personally welcome new students.

The ASU chapter also provided students a chance to work on their career development. They held multiple LSAT webinars and information sessions on graduate schools and other career paths.

According to Donnelly, students should consider joining Pi Sigma Alpha as a way to establish a connection with other students and to take advantage of the support the national office gives in the way of scholarships, networking, professional development and research opportunities.

“We are a political science honor society, and politics can be polarizing at times — but all of our members are respectful of each other political ideologies, and we approach any disagreements from a position of kindness, caring and curiosity,” Donnelly said.

Donnelly also wanted to encourage students, even if they are not currently eligible for full membership, to get involved as an associate member. Although students would not get access to all the honors society has to offer, he shared that it is a good place to start.

“Being an associate member is a good way to make friends within the political science major and really get a feel for Pi Sigma Alpha as a whole,” he said.

Ramirez echoed the benefits of being involved.

“The best part of being the chapter adviser for Pi Sigma Alpha is getting to know a new cohort of students each year,” Ramirez said.

Membership to the Delta Theta chapter of Pi Sigma Alpha at ASU is open to undergraduate and graduate students enrolled in programs of political science. For more information, visit the chapter page on the School of Politics and Global Studies website.