A new study from Arizona State University and Virginia Commonwealth University has found that racial discrimination can lead to depressive symptoms and to problem alcohol consumption in Black American college students. Problem drinking is more common in college students than young adults who do not attend college, but the disparity in how alcohol use affects different people is not well understood in large part because there are few studies on minority populations. This work, which was published in Psychology of Addictive Behaviors in August, examined the pathways that lead to and protect against alcohol use problems in Black American college students. 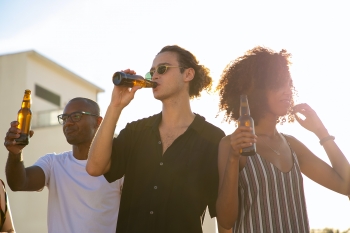 A new study published in Psychology of Addictive Behaviors found racial discrimination led to depressive symptoms and to problem alcohol consumption in Black college students. Positive feelings about being a Black American were associated with a weaker link between discrimination, mental health and alcohol use. Photo by Kampus Production/Pexels Download Full Image

“Black American college students drink less than their peers but are more likely to have problems from drinking. Understanding what the risks and protective factors are for this group is important,” said Jinni Su, assistant professor of psychology at ASU and first author on the paper. “Racial discrimination was related to worse mental health outcomes, which increased the risk for alcohol use and related problems.”

Discrimination is a known stressor that can lead to using alcohol as a coping mechanism.

“When people experience stress and lack strong coping skills or resources, they can turn to alcohol or substance abuse as a coping mechanism. We know from previous research that people who experience racial and ethnic discrimination are more likely to have problems related to excessive drinking,” Su said.

Racial discrimination was associated with alcohol use in two groups of Black American college students. The connection between the two was changes in mental health, in the form of increased depressive symptoms.

“Racial discrimination increased the risk for alcohol use and related problems, and this relationship was linked to worse mental health outcomes,” Su said.

The research team also examined whether how people think about their identity was protective against problem alcohol use. They assessed the impact of an individual having positive feelings about being a Black American and the belief that society at large has positive views about Black people.

“The impact of racial discrimination is not equal for everybody; it varies in part based on beliefs about identity,” Su said. “We found that participants who felt good about being Black were buffered from the effects of how discrimination might impact their mental health and drinking behavior. We also found that participants who think other people view them positively were more negatively impacted by discrimination, possibly because it is harder to understand unfair treatment.”

Eleanor Seaton, professor in the T. Denny Sanford School of Social and Family Dynamics, also contributed to the work along with Chelsea Williams, the Spit for Science Working Group and Danielle Dick from Virginia Commonwealth University.