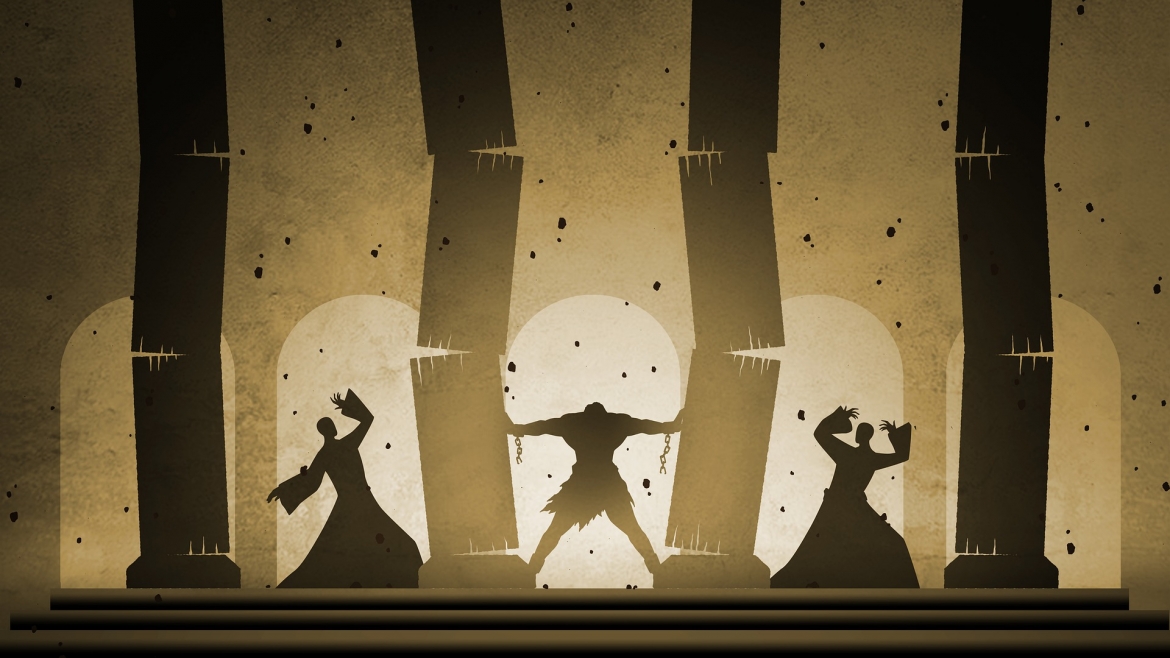 The distance between the work of academia and the society that work is intended to improve is something scholars themselves often lament, but two publications from Arizona State University faculty demonstrate how language and literature in particular can have sometimes surprising connections to issues of contemporary importance.

In “Samson on the Yard: Teaching Milton’s 'Samson Agonistes' in an Arizona Prison,” Associate Professor Joe Lockard, an expert on prison studies, and Professor David Hawkes, an expert on John Milton, write about their own experiences teaching the work in Arizona prisons and how it and other such works, referred to as “prison literature,” can benefit incarcerated individuals while also providing fresh perspectives on the carceral system in general.

And in “Extending Applied Linguistics for Social Impact – Cross-Disciplinary Collaborations in Diverse Spaces of Public Inquiry,” Professor Doris Warriner and her co-editor, University of North Carolina at Charlotte Professor Elizabeth Miller, detail examples of and propose suggestions for how scholars of language might work together with non-language specialists to address pressing concerns and issues of our time.

‘Samson on the Yard’

Lockard is known at ASU for founding Prison Education Programming in 2009, and he continues to teach a weekly poetry workshop at Florence State Prison. Hawkes’ interests span a variety of fields ranging from Darwinism to zombies, but his specialty is the poetry of John Milton, whose work often dealt with the topic of incarceration.

Recognizing an opportunity to capitalize on shared interests, they combined forces to teach Milton’s “Samson Agonistes,” which recounts the biblical warrior’s imprisonment by the Philistines, to actual prisoners.

“It just struck me as an extremely interesting environment in which to teach that particular work, because it's full of reflections on the nature of prison life and the implications,” Hawkes said.

In their article for the Milton Quarterly, Hakwes and Lockard argue that after centuries of being overlooked, the work deserves its own place in the canon of prison literature, something both prisoners and society at large can benefit from.

“There is a tendency to believe that prison literature needs to be simple texts,” Lockard said. “That is wrong. (Prisoners) respond to complex and canonical texts. They have insights that are worthy of a graduate seminar.”

“I think it's important to always contextualize things historically, as well,” Hawkes added. “If you don't know how other societies and societies of the past have treated imprisonment, it's easy to make the mistake of assuming that the way we treat prisons is natural or the only right way to do it. So by reading works like ‘Samson Agonistes,’ we can get an idea of how these things have changed over time and learn from that.”

In the introduction to their book, Warriner and Miller lay out their case for what it really means to apply applied linguistics and call on their colleagues in the field to put their money where their mouth is and leverage language to create a more equitable society in real, meaningful ways.

“The field has been moving more explicitly towards valuing work and scholarship that brings a critical perspective on the relationship between race, language and power,” Warriner said, “but this is recent and there has been some resistance. So there are two gaps (we’re trying to bridge): one is between what we have been doing and what we should be doing. The other is between the kinds of issues we are researching and writing about, and the kinds of impact we hope to have on the communities where that research is conducted.”

With Warriner’s mentorship, one of her graduate students recently completed research on health communication advocacy, one of many areas she and Miller argue could benefit from the input of applied linguists. But in their eyes, the potential to use the study of language to effect change is limitless.

“Language is how we make sense of the world and interact with the world, so it is omnipresent and always influential,” Warriner said. “Whether we are talking about race relations, workplace discrimination, housing discrimination, access to health care, gender/sexuality, global warming, the cultural wars or growing wealth disparities, the ways we use language can either contribute to the problem or help us identify and address the problem.”

A new study from scientists using the Atacama Large Millimeter/submillimeter Array (ALMA) radio telescope suggests that previously displaced gases can re-accrete onto galaxies, potentially slowing down the process of galaxy death caused by ram pressure stripping and creating unique structures more resistant to its effects. “Much of the previous work on ram pressure-stripped galaxies is focused ...

“Much of the previous work on ram pressure-stripped galaxies is focused on the material that gets stripped out of galaxies. In this new work we see some gas that rather than being thrown out of the galaxy never to return is instead moving like a boomerang, being ejected out but then circling around and falling back to its source,” said lead author William Cramer, who is an astronomer and postdoctoral research scholar with Arizona State University's School of Earth and Space Exploration. “By combining Hubble Space Telescope and ALMA data at very high resolution, we are able to prove that this process is happening.” 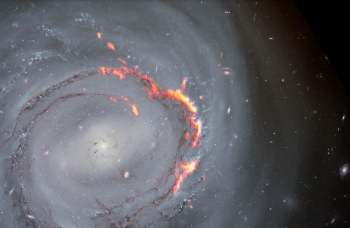 Zoomed-in view of an ALMA (red/orange) and Hubble Space Telescope (optical) composite of NGC4921. This composite highlights filament structures resulting from the effects of ram pressure stripping. Ram pressure stripping is a process known to strip gas out of galaxies, leaving them without the material needed to form new stars. A new study indicates that some material may not be stripped away from the galaxy, and is instead, re-accreted, potentially with the help of magnetic fields, slowing down the process of galaxy death. Credit: ALMA (ESO/NAOJ/NRAO)/S. Dagnello (NRAO), NASA/ESA/Hubble/K. Cook (LLNL), L. Shatz Download Full Image

Ram pressure stripping refers to the process that displaces gas from galaxies, leaving them without the material needed to form new stars. As galaxies move through their galaxy clusters, hot gas known as the intra-cluster medium — or, the space between — acts like a forceful wind, pushing gases out of the traveling galaxies. Over time, this leads to the starvation and “death” of once-active star-forming galaxies. Because ram pressure stripping can speed up the normal life cycle of galaxies and alter the amount of molecular gas within them, it is of particular interest to scientists studying the life, maturation and death of galaxies.

“We’ve seen in simulations that not all of the gas being pushed by ram pressure stripping escapes the galaxy because it has to reach escape velocity in order to actually escape and not fall back. The re-accretion that we’re seeing, we believe is from clouds of gas that were pushed out of the galaxy by ram pressure stripping and didn’t achieve escape velocity, so they’re falling back,” said Jeff Kenney, an astronomer at Yale University and the co-author on the study. “If you’re trying to predict how fast a galaxy is going to stop forming stars over time and transform into a red, or dead galaxy, then you want to understand how effective ram pressure is at stripping the gas out. If you don’t know that gas can fall back onto the galaxy and continue to recycle and form new stars, you’re going to overpredict the quenching of the stars. Having proof of this process means more accurate timelines for the life cycle of galaxies.”

The new study focuses on NGC 4921 — a barred spiral galaxy and the largest spiral galaxy in the Coma Cluster — located roughly 320 million light-years from Earth in the constellation Coma Berenices. NGC 4921 is of particular interest to scientists studying the effects of ram pressure stripping because evidence of both the process and its aftermath is abundant. 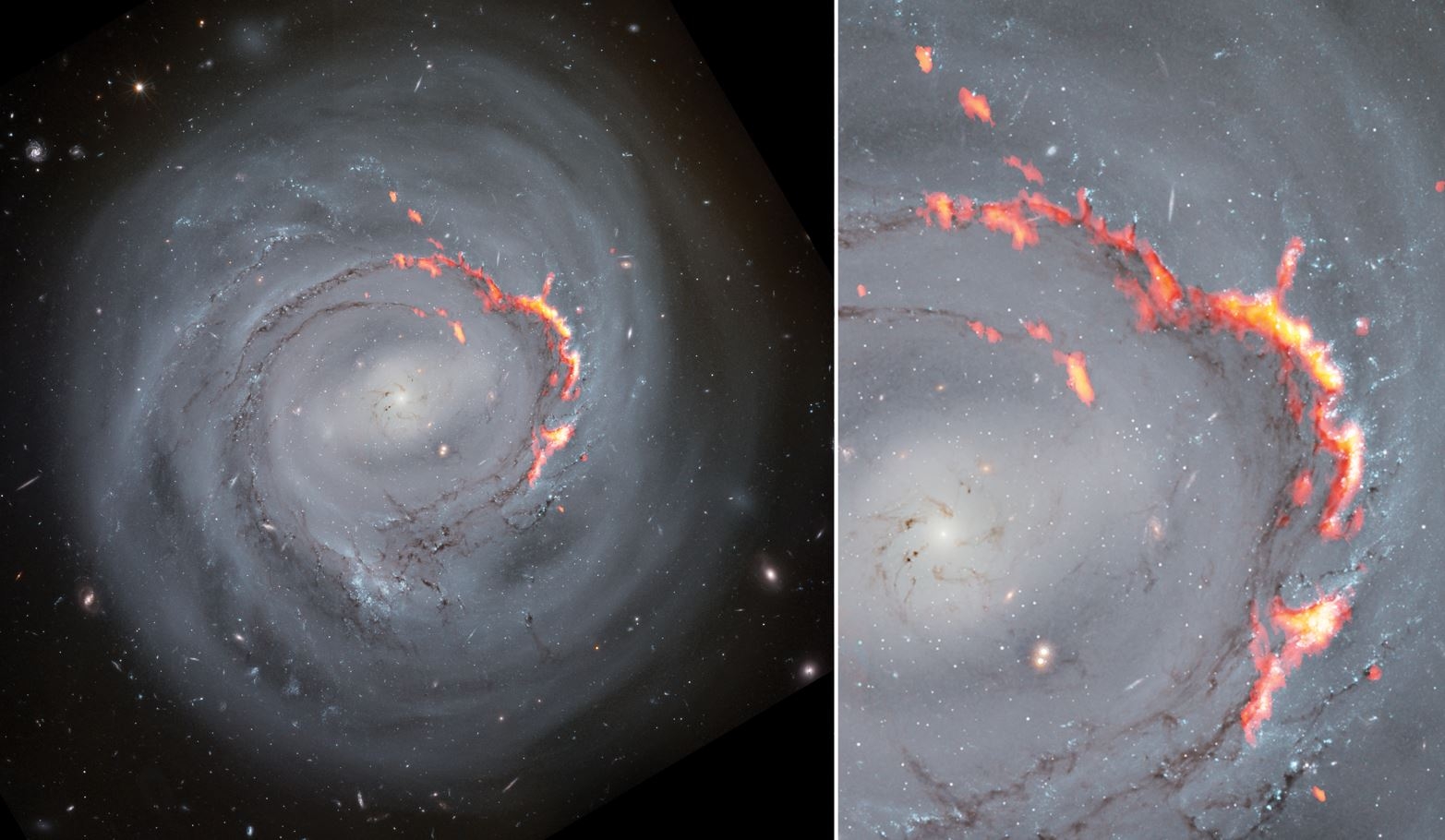 “Ram pressure triggers star formation on the side where it is having the greatest impact on the galaxy,” Cramer said. “It’s easy to identify in NGC 4921 because there are many young blue stars on the side of the galaxy where it’s occurring.”

Kenney added that ram pressure stripping in NGC 4921 has created a strong, visible line between where dust still exists in the galaxy and where it doesn’t. “There is a strong dust line present, and beyond that there’s almost no gas in the galaxy. We think that that part of the galaxy has been almost completely cleaned out by ram pressure.”

Using ALMA’s Band 6 receiver, scientists were able to resolve carbon monoxide, the key to “seeing” both those areas of the galaxy devoid of gas, as well as those areas where it is re-accreting.

The ability to see more of the galaxy, even at its faintest, unveiled interesting structures likely created in the process of gas displacement, and further immune to its effects.

“Ram pressure appears to form unique structures, or filaments in galaxies that are clues as to how a galaxy evolves under a ram pressure wind. In the case of NGC 4921, they bear a striking resemblance to the famous nebula, the Pillars of Creation, although on a much more massive scale,” Cramer said. “We think that they are supported by magnetic fields which are preventing them from being stripped away with the rest of the gas.” 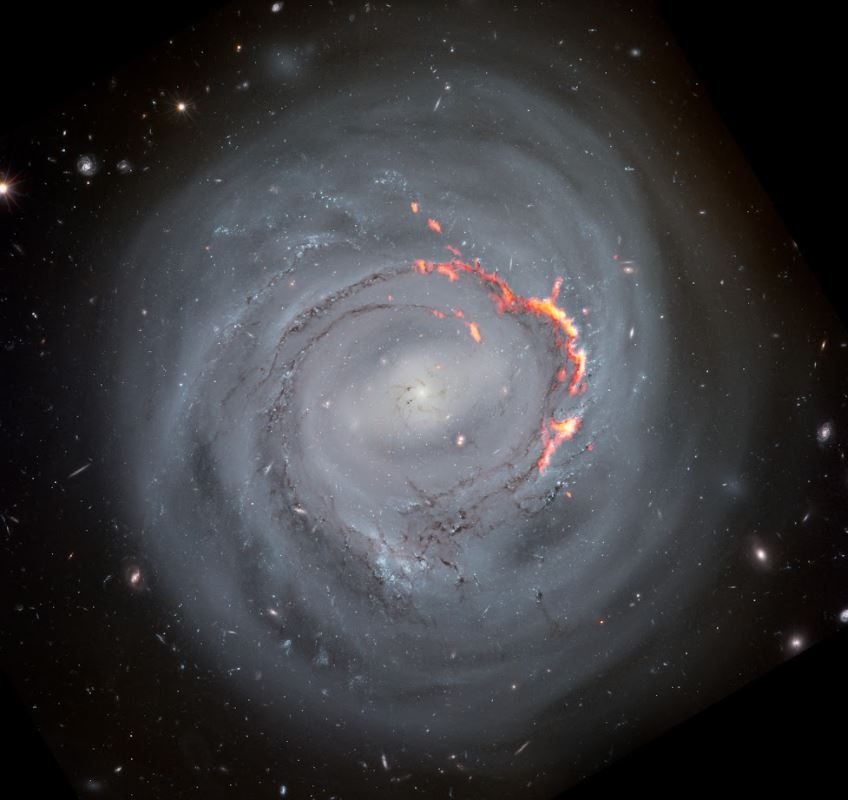 Observations revealed that the structures are more than just wisps of gas and dust; the filaments have mass and a lot of it.

“These filaments are heavier and stickier — they hold on to their material more tightly than the rest of the galaxy’s interstellar medium can do — and they seem to be connected to that big dust ridge both in space and in velocity,” Kenney said. “They’re more like molasses than smoke. If you just blow on something that is smoke, the smoke is light, and it disperses and goes in all directions. But this is much heavier than that.”

Although a significant breakthrough, the results of the study are only a starting point for Cramer and Kenney, who examined one small part of just one galaxy.

“If we want to predict the death rate of galaxies, and the birth rate of new stars, we need to understand if and how much of the material that forms stars, originally lost to ram pressure, is actually recycled back,” Cramer said. “These observations are of just one quadrant of NGC 4921. There is likely even more gas falling back into other quadrants. While we have confirmed that some stripped gas can ‘rain’ back down, we need more observations to quantify how much gas falls back and how many new stars form as a result.”

"A fascinating study, demonstrating the power of ALMA and the benefit of combining its observations with those of a telescope at other wavelengths," added Joseph Pesce, National Radio Astronomy Observatory/ALMA program officer at the National Science Foundation. "Ram pressure stripping is an important phenomenon for galaxies in clusters, and understanding the process better allows us to understand galaxy evolution — and nature — better."

The results of the study will be published in an upcoming edition of The Astrophysical Journal.

This press release was written by Amy Oliver of the ALMA Observatory with contributions from Karin Valentine of the ASU School of Earth and Space Exploration.