Karen Schupp, associate professor and associate director of curriculum and instruction in ASU's School of Music, Dance and Theatre, has been awarded both the Susan W. Stinson Book Award for Dance Education and the Ruth Lovell Murray Book Award for her book “Ethical Dilemmas in Dance Education: Case Studies on Humanizing Dance Pedagogy.”

“I am incredibly honored to have received both of these awards,” Schupp said. “I have always looked up to Sue Stinson and her work in dance education research. Her work and her approach to the work has always inspired me, so for our book to have received an award in her name is especially meaningful. And, to receive national recognition for our book from (the National Dance Education Organization) is amazing. It speaks to the multiple perspectives and voices included in the book and for who the book can reach.” 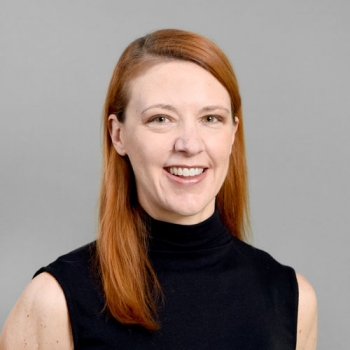 The book is a first-of-its-kind volume of research-based fictionalized case studies from experts in the field of dance education.

Schupp and co-editor Doug Risner, professor of dance at Wayne State University, examined theory and practice developed from real-world scenarios that call for ethical decision-making. In addition to the essays, the book includes several activities where the reader can reflect on their own practices in relation to what they have read, allowing the readers to self-direct the evolution of their teaching praxis through engaging with the book.

Schupp said that many books in dance education focus on best practices for teaching rather than asking teachers, or student teachers, to consider how they make decisions about teaching. When the focus is on best practices, she said, it is easy to assume that what is best for one type of dance or one group of students is likely best for all, regardless of who is in the room or what is being taught.

“Our goal was to present a collection of essays that would prompt readers to really consider the hows and whys of their teaching and to examine the application of pedagogical theories in real-life scenarios,” Schupp said. “We felt it was important to uncover the ethical dimensions of teaching in a variety of teaching contexts to reveal the hidden complexities of teaching dance and to prompt readers to really reflect on their teaching practices and assumptions about teaching.”

The National Dance Education Organization’s newly established NDEO | Ruth Lovell Murray Book Award honors outstanding book-length publications in dance education and recognizes authors who conduct an exemplary inquiry that advances the field. In recognition of Ruth Lovell Murray, a pioneer in the field of dance education, the annual award honors books published in the English language during 2020 and 2021.

Schupp and Risner began research for the book in 2014 and involved 19 contributors in the case studies.

“I never imagined myself as a book author when I started my career,” Schupp said. “Even though this is my third book, it is still such an amazing process to see a publication come to life, and to see one become nationally recognized is truly an amazing feeling.”

Walking is just putting one foot in front of the other, but there are complex biomechanical factors taking place throughout each step — especially in the ankle.Hyunglae Lee, an assistant professor of mechanical and aerospace engineering in the Ira A. Fulton Schools of Engineering at Arizona State University, took a unique approach to researching the ankle’s dynamic movement during walking.The ...

Walking is just putting one foot in front of the other, but there are complex biomechanical factors taking place throughout each step — especially in the ankle.

Hyunglae Lee, an assistant professor of mechanical and aerospace engineering in the Ira A. Fulton Schools of Engineering at Arizona State University, took a unique approach to researching the ankle’s dynamic movement during walking. 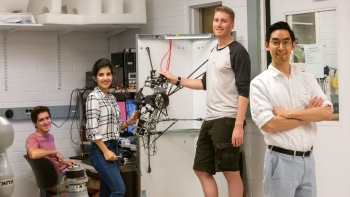 The results of this work — developed in collaboration with Elliott Rouse, an assistant professor of mechanical engineering at the University of Michigan, Ann Arbor, and Hermano Igo Krebs, a principal research scientist at Massachusetts Institute of Technology, and originally published in 2016 in the IEEE Journal of Translational Engineering in Health and Medicine — is helping improve rehabilitation and human-robot interaction applications.

“Outcomes of this and related studies will not only contribute to the scientific advancement of our understanding of normal and pathological ankle behavior during various real-life task conditions, but also the development of assistive or rehabilitation devices capable of providing optimal support without hindering natural lower extremity function,” said Lee, who has built upon this research over the past several years.

As the second-highest cited work over the past five years in the IEEE Journal of Translational Engineering in Health and Medicine, this year Lee’s 2016 paper earned the second prize in the IEEE Engineering Medicine and Biology Society Prize Paper Awards.

Ankle joint impedance — the relationship between the joint position and the force of rotation in motion — is a fundamental part of the human neuromuscular system that explains the energy exchanges that occur while walking.

“Quantification of this property is critical in understanding the stability of the human body as well as the quality of walking function,” Lee said. “Until we published this work, almost all previously reported work on the quantification of ankle impedance was strictly limited to static posture conditions, such as seated and quiet standing positions, and there was no systemic way to quantify ankle impedance during dynamic walking.”

In those studies, researchers used motion analysis, 3D motion capture and force-plate sensing systems to comprehensively understand ankle biomechanics, but these methods don’t allow for the study of impedance. So, Lee and his collaborators developed a different approach.

Their system, described in the award-winning 2016 paper, involved two robotic platforms: one recessed into the ground on which a research subject could walk, and another that is worn on the ankle and introduces perturbations to the ankle throughout the stance and swing phases of walking.

Then the team used system identification to quantify ankle impedance through the analysis of input perturbations and the corresponding output responses.

“This integrated approach allowed us to reliably characterize ankle impedance throughout the full gait cycle during walking, which is not achievable in the traditional motion analysis settings,” Lee said.

When compared to static poster studies, the reliability of Lee and his collaborators’ method was just as effective and reliable in quantifying impedance. They also found that ankle impedance could be approximated accurately through three components: the stiffness of the ankle joint, the ability to absorb perturbations (damping) and the tendency to remain in motion or at rest (inertia). The data showed ankle stiffness underwent the most adjustments during the gait cycle.

“Joint stiffness is one of the main focuses in controlling human-interactive robots and administering neurorehabilitation for functional improvement,” Lee said.​ 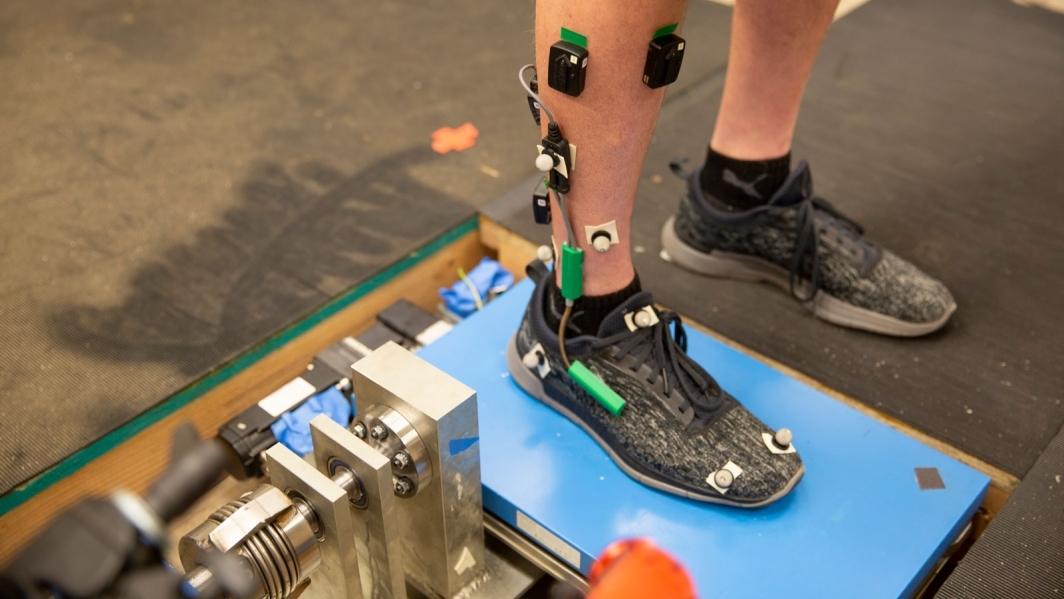 A robotic platform developed by Lee’s research team. It includes novel features such as the ability to actuate the ankle in multidimensional space and simulate various compliant surface conditions. Lee is using the platform for follow-up studies to investigate ankle impedance in healthy and impaired gaits during various tasks. 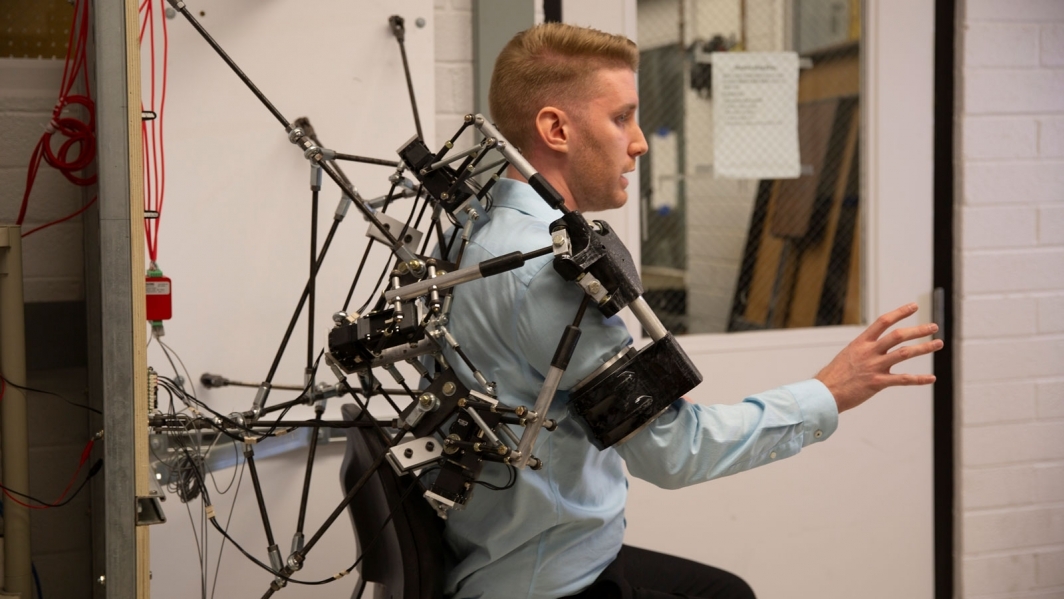 This enhanced understanding of ankle biomechanics is helping with robotic rehabilitative and assistive devices, including prosthetics, exoskeletons and balance training platforms. For use in helping people with walking impairments, the data from the impedance profiles of healthy individuals could be used as a baseline to help create training exercise interventions to correct altered ankle behavior.

Lee has been building upon this prior research in his lab, the Neuromuscular Control and Human Robotics Laboratory at ASU, to investigate ankle impedance under various dynamic task conditions with people who have healthy gaits and in others with neurological impairments such as stroke or multiple sclerosis.

His lab team also uses the approach they developed for ankle impedance to study other limb and joint impedance.

“For example, we are currently working on the quantification of shoulder joint impedance and upper-limb impedance, which will be used to develop a new robot-aided rehabilitation framework for shoulder rehabilitation, and a high-performing yet safe and stable upper-limb exoskeleton robot for industrial applications,” Lee said.

The first project is supported by a National Science Foundation Faculty Early Career Development Program (CAREER) Award and the second project he is working on with Sze Zheng Yong, an assistant professor of mechanical engineering, with the support of an NSF National Robotic Initiative, or NRI, award.

The start of a prolific robotics and rehabilitation career at ASU

The 2016 paper published in the IEEE Journal of Translational Engineering in Health and Medicine was Lee’s first journal publication as an ASU faculty member in the School for Engineering of Matter, Transport and Energy, one of the six Fulton Schools.

He has had many research successes since then, including earning a 2019 NSF CAREER Award, a 2021 New Investigator Award from the Arizona Department of Health Services and winning the Wearable Robotics Association 2020 WearRAcon Innovation Challenge with his students who developed a soft robotic ankle foot orthoses for active stroke rehabilitation.

“The Fulton Schools and (School for Engineering of Matter, Transport and Energy) Director Lenore Dai have been supporting me in many ways to continue and expand my research and start several new colleagues in the Fulton Schools and outside with clinical collaborators in the Valley,” Lee said. “And my academic mentors (in the School of Biological and Health Systems Engineering, another of the Fulton Schools) Marco Santello, Thurmon Lockhart and James Abbas have supported me and acknowledged the potential of my research. Of course, all these research projects would not have been possible without the hard work of current and past students in my lab.”