Emma Broyles, an Arizona State University junior, won the title of Miss Alaska in June and will represent her state on the national level in the Miss America 2022 competition in December.

Her journey to the national stage began in 2017 when, as a 15-year-old high school sophomore, she entered the local preliminary Miss America program competition in her hometown of Anchorage, Alaska. She won the title of Miss Anchorage’s Outstanding Teen in the first-ever competition she entered. 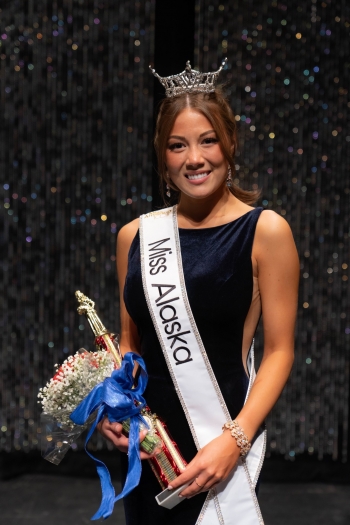 ASU junior Emma Broyles was crowned Miss Alaska in June. She will compete for the title of Miss America 2022 in December. Download Full Image

That same year, Broyles went on to the Miss Alaska’s Outstanding Teen competition and won that title, too.

After serving a year as Miss Alaska’s Outstanding Teen, Broyles took a hiatus from competitions, during which she graduated high school and entered ASU as a student in Barrett, The Honors College studying biomedical sciences and voice performance.

Broyles, 19, will have an especially busy semester, handling her Miss Alaska duties and her studies while preparing for the Miss America competition that will be broadcast live from the Mohegan Sun Arena in Connecticut.

Barrett Honors College students may recognize Broyles from her appearances on the college’s social media and as emcee at events.

Broyles took time out to reflect on her experiences as a candidate in the Miss America program and an ASU student. Here’s what she had to say.

Question: How did you decide to attend ASU?

Answer: I toured ASU when I was in high school, and I fell in love with the campus and atmosphere. I really felt at home when I visited ASU and I did not get that same feeling when touring other campuses, so I knew that ASU was the school for me. It also helped that ASU has great merit-based scholarships that help me pay for most of my degree and such a strong honors college.

Q: The Miss America program has been around for 100 years. How has it changed over time?

A: Miss America has been moving away from the word "pageant" after rebranding as Miss America 2.0. There have been a lot of adjustments in the past few years with changes in leadership, so it is now called the Miss America competition. You may have heard that swimsuit is no longer a portion of the competition. Also, another change in terminology is that we are now called "candidates" instead of contestants.

Q: How did you get involved in Miss America competitions, and what are the benefits of participating?

A: My mom and I were introduced to the Miss America program when I was 15 years old. Looking to start earning some college scholarships, I decided to compete in my local preliminary competition, Miss Anchorage's Outstanding Teen. Since competing in my first competition, I have earned thousands of dollars in college scholarships and developed a wide range of skills, from participating in charity runs in heels with a crown on to answering controversial political questions in front of hundreds of people.

Q: Which competitions have you participated in?

Q: What are your duties as Miss Alaska?

A: As Miss Alaska, I have the opportunity to volunteer at events all over the state and promote my social impact initiative of Special Olympics. I have a unique opportunity as Miss Alaska to have such a large public platform to use as a vehicle to speak out about important issues and connect with members of my community and hear their stories.

Q: Tell us more about your social impact initiative. What is it, and how did you choose it?

A: My social impact initiative is Building Community Through Special Olympics. I began volunteering with the Special Olympics over 12 years ago when my older brother became an athlete. Since then, I have been a coach for the swim team and president of the largest Special Olympics school program in Alaska. I and my family received the honor of being named Special Olympics Alaska's Family of the Year.

Q: How will you prepare for the Miss America pageant?

A: The job of Miss America requires a significant amount of public speaking, so a large portion of the competition is dedicated to testing each candidate's ability to speak eloquently about given political topics and their social impact initiative in front of a large crowd. In preparation for the judges’ interview and onstage interviews, I keep up to date with national news and practice answering political questions and questions about my social impact initiative on the spot. Another aspect of my Miss America preparation will include spending time rehearsing my onstage talent, which is singing.

Q: How do you balance being in competitions with being an honors student at ASU?

A: Over the years, I have gained an understanding of the importance of utilizing a calendar and a planner! Keeping organized has been the single most important step in maintaining a busy schedule and ensuring that I am not missing anything. I also heavily rely on my support systems and reach out to my family and friends if I ever feel discouraged or overwhelmed.

Q: What advice would you give to other young women interested in the Miss America program?

A: For anyone considering competing in the Miss America program, I would strongly recommend it. The Miss America Organization is the largest provider of scholarships for young women. In fact, 12,000 young women across the country receive over $45 million in college scholarships in one year alone at the local, state and national levels.

Aside from earning college scholarships, young women in the Miss America program have the opportunity to develop strong public speaking and interviewing skills that will benefit them for the rest of their lives. Since I competed in my first local competition over four years ago, I have earned thousands of dollars in scholarships, become friends with some of the most accomplished young women in the country and gained some once-in-a-lifetime experiences.

The center, or CIC, has developed solutions to improve public safety, spur economic development and increase sustainability, and the Civic Engagement award from the International Data Corporation (IDC) acknowledges the valuable output of its community-minded efforts. 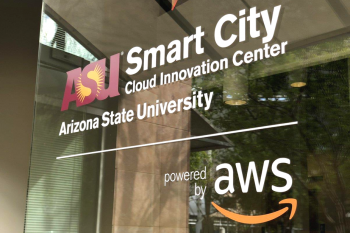 The CIC team partners with city leaders to tackle some of the most challenging of urban initiatives. From early drafting and brainstorming to the reveal of a prototype, the center employs Amazon’s innovation processes, cloud expertise and global solution platforms to advance the development of smart regions across Arizona and beyond.

“We are incredibly proud of the work our team and student interns have done over the past two years at the CIC,” said General Manager Ryan Hendrix. “One of our goals at the CIC is to be able to share and scale solutions with others. This award is great because it will help extend the reach of the work we are doing to advance digital transformation and smart city solutions in the greater Phoenix region.” 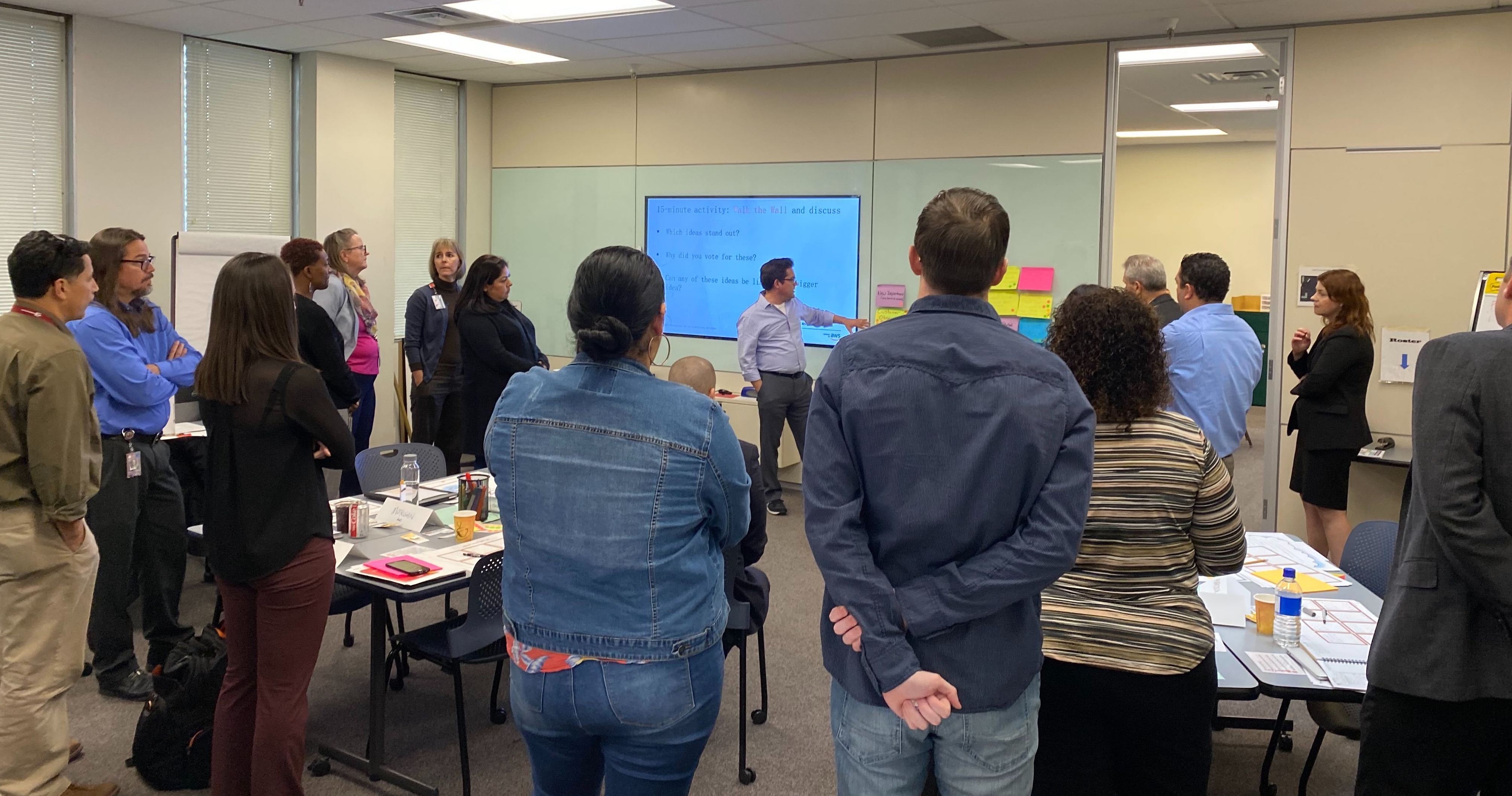 Guided by the University Technology Office Deputy CIOs John Rome and Chris Richardson, the CIC is led by:

The CIC also provides ongoing opportunities for ASU students to get involved in the exploration of urban challenges and development of smart solutions through internships with the center.

The CIC’s place among other winners such as Las Vegas Smart City and Parks, the NYCx Co-Labs' Housing Rights Challenge and more is representative of the innovative work being done across the continent to improve communities. For more information about the awards, visit IDC’s site.

IDC Government Insights assists government policy, program and IT leaders, as well as the suppliers who serve them, in making more effective technology decisions by providing accurate, timely and insightful fact-based research and consulting services. The IDC is the premier global provider of market intelligence, advisory services and events for the information technology market.