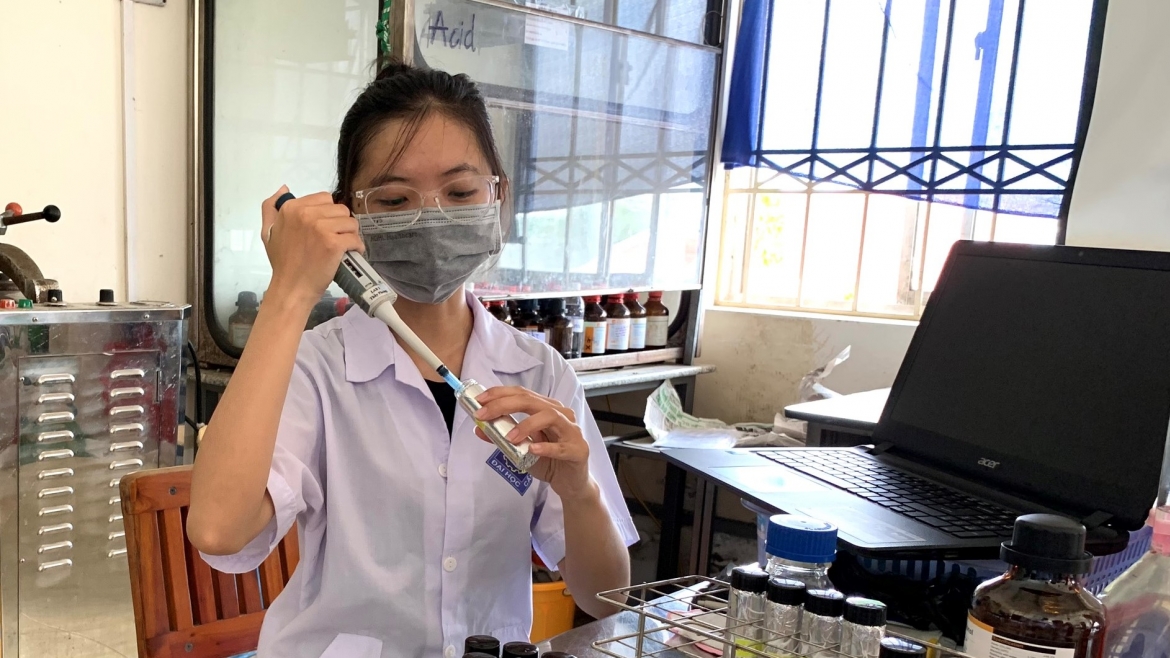 Vuong Thi Ngoc Tuyet grew up in the Mekong Delta's largest city, Can Tho, Vietnam. Throughout her childhood, she had an energetic curiosity for science. Raised in a family where women only graduated high school, she convinced her skeptical parents to let her join Can Tho University's challenging chemical engineering program.

"No woman in my family had a chance to go to university," Tuyet said. "I wanted to do something different. I wanted to change people's perceptions about women in STEM. That was how I convinced my parents to let me attend university."

Tuyet's journey from a shy first-generation university student to a confident young engineer was aided by her participation in Engineering Projects in Community Service (EPICS), an award-winning social entrepreneurship program supported by USAID BUILD-IT and Arizona State University.

Video by USAID BUILD-IT and the Mekong-U.S. Partnership

As one of four female students in her cohort, Tuyet was intimidated by her new school.

"When I first joined the university, I was shy and lost. As a minority, I didn't speak up or voice my opinions — even when I needed something," she said. Tuyet's mentors encouraged her to join EPICS.

The program's 30% female enrollment minimum and emphasis on community-driven innovation made Tuyet feel welcome and her work feel meaningful. During EPICS, Tuyet met many like-minded, talented young women. She worked in teams with other undergraduate students to design, build and deploy solutions to solve problems in their community. In her first year, Tuyet and two other young women invented a candy made of rice bran to help diabetic patients manage their diets. She designed this candy to inspire her diabetic mother.

Then, she led a team to build a safe, high-capacity, easy-to-use roller pesticide sprayer for farmers to roll through orchards instead of carrying on their backs. This invention won the team the first prize at the nationwide EPICS final showcase. Tuyet's family was thrilled to see her win the top award in engineering. They now trusted that a STEM education would guide their daughter to success. Tuyet's journey even inspired her younger sister to join STEM courses.

Tuyet said she draws on her experiences as a woman to develop her team's innovations.

"I can draw inspiration from being a woman," she said. "I can set my mind to solve the problems that women are facing every day."

Tuyet will soon graduate from Can Tho University and pursue a career in sustainable fuel.

"My dream is to work as an engineer at an oil and gas company, but I heard they only hire women for office work. I will apply anyway. I am ready to show everyone that I can do anything my male colleagues can."

USAID BUILD-IT supports Tuyet and all EPICS students to apply their engineering know-how for social good. The USAID BUILD-IT Alliance is mission-driven to support top universities, like Can Tho University, to integrate project-based learning into their curricula. Arizona State University's Ira A. Fulton Schools of Engineering leads the alliance and manages EPICS in Vietnam.

In spring 2019, a cohort of ASU EPICS students worked alongside Vietnamese students for an international engineering project. In 2021, Can Tho University will become one of Vietnam's first universities to adopt EPICS into a course. Thanks to Tuyet and her peers' hard work, Vietnamese young people can see that having a woman on an engineering team is an asset and a force for good in their communities and across the country.

What's the rush? A debate about remote vs. in-person work

Is the office dead?As COVID-19 vaccines become readily available, social distancing guidelines begin to relax and active COVID-19 cases among Americans continue to decline, many companies and organizations are looking to the future of work. How should companies handle the long-anticipated — and in some cases dreaded — return to the office? Will we ever return to the old 9-to-5 model? Do we eve... What's the rush? A debate about remote vs. in-person work

Is the office dead?

As COVID-19 vaccines become readily available, social distancing guidelines begin to relax and active COVID-19 cases among Americans continue to decline, many companies and organizations are looking to the future of work. How should companies handle the long-anticipated — and in some cases dreaded — return to the office? Will we ever return to the old 9-to-5 model? Do we even need to?

“This is, in some ways, a privileged conversation,” said Andrés Martinez, editorial director of Future Tense, as he moderated a Zoom debate in which debaters took opposing sides — yea or nay — on the proposition "We All Need to Rush Back to the Office."

“It’s estimated that 60% of people in our economy do not have the luxury of having this debate," he said. "The nature of their jobs means that they have been working, many of them, throughout the pandemic. They are the heroes of this time.”

Since March 2020 — when stay-at-home orders closed offices across the country — 52% of all American workers, on average, have performed their job all or part of the time from home. According to USA Today, 40% of Americans prefer to work from home full time, compared with 35% who seek a home-office hybrid and 25% who want to go back to the office full time.

Jamie Dimon, chairman and CEO of JPMorgan Chase, has told employees to start getting ready to return to the office this summer, while Twitter CEO Jack Dorsey announced that the social media company would be allowing many of its employees to work remotely forever.

“In the U.S. alone, eliminating the daily commute saved workers around 90 million hours each week, which is the time-saving equivalent of nearly 1 billion full workdays since the pandemic began,” said Ashley Whillans, assistant professor of business administration at Harvard Business School, who took the "nay" side during the debate. “These numbers suggest that sustained remote and hybrid models of work may provide employees with the chance to reclaim their most precious and limited resource: their time.”

All well and good, according to the "yeas." But the return to the office affects millions of people who do not — and were not — working in them.

“Remote work is good for whom? It’s perhaps good for white-collar workers, but it’s definitely bad for the ecosystem that is built up around downtown office work,” argued Henry Grabar, a staff writer at Slate. “Office work is a huge economic force that supports millions of blue-collar workers, transportation, restaurants, secretarial work, cooks and cleaners. Those jobs have vanished. I think that if you are opting out of this system as a worker, you need to reckon with the fallout that is happening in the place you used to go.”

Katherine J. Wu, a staff writer at the Atlantic (who, like Grabar, took the "yea" position), agreed and focused on the need for people to be in an office in order to work collaboratively and encourage new ideas.

“I would love to see some flexibility. I am fine with people being able to choose the work environment that’s going to be most productive for them,” Wu said. “But I think demonizing the office is going to strip some people of that choice. I think turning the office into a scapegoat is going to limit the options for how people do well. I don’t want to feel guilty about going back to a space where my co-workers and I can see each other in person and build collaboratively.”

On the other side of the coin, Brigid Schulte, director of the Better Life Lab at New America, argued that it was returning to the office that would exacerbate preexisting inequities.

“I would say that office culture, face-time culture, long-work-hours culture is really very much at the heart of what drives a lot of inequality at work,” Schulte said. “A recent survey out of the U.K. asked people, ‘Who plans to go back to the office, and who plans to work hybrid or remote?’ Not surprisingly, women and mothers were saying they were more likely to be working remotely and men and fathers were more likely to say they would go back to work. If that happens, and if managers prioritize that, and are not aware of it and intentionally designing against it, then that could make things worse.”

While there are many gender inequalities in the workplace, especially related to child care, Grabar argued that these were not problems caused by the office.

“I would say there are serious problems with work culture, how much we work, and with the way we deal with child care in this country, but to some extent I feel like the office is being made a scapegoat for these problems,” Grabar said. “Just because not going to the office becomes an answer to the child care problems for some workers does not fix the child care issue for society. At least 50% of American workers are not working from home. They’re going to work, and they still have child care problems. For white-collar workers to say, ‘Well, this is a favorable arrangement for us because it fixes this glaring hole in the safety net,’ to me that’s them opting for a personal solution to the child care issue rather than focusing on societal change, which is what we need.”

“We are not here to argue that remote models are a panacea for the challenges of modern work. We are here to argue something bigger,” Whillans said. “We need to learn from the challenges of the last year and use this moment as a paradigm shift to reimagine our relationship with work before we end up worse than where we started.”

Schulte agreed that this was an opportunity to think big. “There’s all this talk about needing to cut off unemployment pandemic benefits because people are ‘too lazy and won’t go back to the office.’ Why on Earth would you choose to go back to a $9-an-hour-wage job when your employment benefits are finally giving you a living wage? We live in a country where, before the pandemic, you could not live in a two-bedroom apartment in any city on a minimum wage job. Researchers who did a meta-analysis found that the way we worked before the pandemic — across the socioeconomic spectrum — was actually the fifth-leading cause of death in the United States. That needs to change.”

The debate on the return to the office and the future of work was sponsored by Future Tense, a partnership of Slate, New America and Arizona State University, which explores how emerging technologies are changing the way we live.