Oversimplification leads to faulty understanding of how heat will affect humans as the climate changes, international group of researchers says

On July 12, 1995, a days-long heat wave began in Chicago. On July 13, Midway International Airport clocked in at 106 degrees Fahrenheit. Nights, too, were abnormally hot with temperatures in the low 80s, offering scant relief from the heat and humidity.

Nearly 700 people died in Chicago alone. Especially hard hit were those who didn’t have air conditioning or couldn’t afford to turn it on, or who had windows nailed shut because of the fear of crime. The poor, the elderly and the isolated were particularly vulnerable. What’s more, the local government was ill-prepared for such an event. 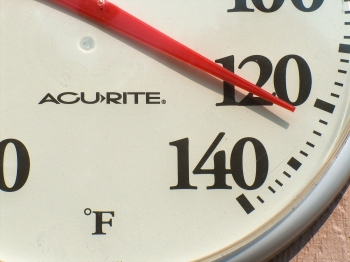 To better prepare for an ever-warming world in which heat waves are increasingly common, a group of international researchers is calling attention to the physiological variables and complexities of how humans react to the heat, or their “thermoregulation.” It turns out that these variables characteristically are often oversimplified and that oversimplification can result in a faulty understanding of how heat will affect humans as the climate changes.

The researchers’ commentary, “Simplicity lacks robustness when projecting heat-health outcomes in a changing climate,” was published online in the journal Nature Communications.

“All heat-related mortality is potentially preventable, with all countries affected by increases in the frequency, intensity and duration of heat waves,” explained Kristie Ebi, professor of global health at the University of Washington and a co-author of the commentary. “Providing robust projections are critical for informing effective interventions.”

The paper highlights the importance of multidisciplinary teams to address the complex challenges of projecting the extent to which heat-related morbidity and mortality could be altered by additional climate change, said Ebi.

Many past studies are published by climate researchers without input from health modelers or physiologists.

“Physiological heat strain can involve not just rises in core temperature but increases in the work that the heart must do to help keep core temperature in check,” said co-author Ollie Jay, professor of heat and health and director of the Thermal Ergonomics Laboratory at the University of Sydney in Australia.

“Cardiovascular collapse is one of the leading causes of hospitalization and death during heat waves,” he said. “There are also limits to sweating, which change as a function of factors such as age, that are not currently accounted for in current projection models. The capacity to perform everyday activities and outdoor work are also key considerations for whether a region will be livable in the future.”

Human health models may use “conservative assumptions” to calculate heat exposure that can lead to underestimating the risk of prolonged exposure to elevated temperatures, explained Vanos. For example, one previously used scenario assumes a person is completely sedentary, unclothed, in the shade, maximally heat acclimatized and an average-size adult — not a realistic representation of many people and certainly not of someone with an illness, on medication or of advanced age.

The authors state that the key to successfully assessing heat’s effect on humans also involves accurately estimating the length of time someone spends in the heat. Duration affects whether core body temperature rises and by how much, which in turn affects the risk of heatstroke. Likewise, cardiovascular strain from dehydration or physical exertion can affect how people fare.

For example, researchers should consider numerous variables to accurately project how short bouts of work, say 15 to 30 minutes, affect athletes or how long periods of exertion affect outdoor workers.

Of particular concern to the researchers is the world’s aging population, said Vanos.

“We know that demographics are shifting, and we know that the elderly are more at risk for heat death due to thermoregulatory decline. These changes increase the urgency of identifying better ways to cope, other than just air conditioning, so that people can keep safe now and in a warming climate.”

Inaccurate and unreliable effects of extreme heat are not only dangerous for individuals but can put individual communities at risk when it comes to preparedness.

“That can be really dangerous in terms of decision-making and how health resources are spent,” said Vanos.

In essence, inaccurate projections can result in either over- or underpreparation for the heat in a given location, which in turn can lead to avoidable morbidity and mortality.

Vanos and her co-authors emphasize the importance of analyzing a range of realistic variables and considering what that means when it comes to an area’s livability, not just its survivability.

“We often see news reports of study results suggesting that a place in the future will not be survivable,” said Vanos. “That’s important, but we want a place to be livable, not just survivable. Livable means the climate can safely sustain work, play and well-being for an extended period of time.”

How we use technology reveals a lot about us, especially in times of crisis. Over the past year, ASU College of Health Solutions Assistant Professor Katie Pine and colleagues leveraged that fact to investigate the intensive “risk work” being conducted by individuals amid the COVID-19 pandemic.In a paper published recently in the Proceedings of the ACM Conference on Human Factors in Computation...

Many turned to a health care friend, rather than the news, for COVID specifics.
June 15, 2021

Researchers use crisis informatics to investigate people's specific concerns with COVID-19, how they gather info

How we use technology reveals a lot about us, especially in times of crisis. Over the past year, ASU College of Health Solutions Assistant Professor Katie Pine and colleagues leveraged that fact to investigate the intensive “risk work” being conducted by individuals amid the COVID-19 pandemic.

In a paper published recently in the Proceedings of the ACM Conference on Human Factors in Computational Systems, Pine and fellow researchers from George Mason University, University of California, Irvine and the Australian National University detail findings that reveal not only how people in the U.S. perceived pandemic-related risks but how they gathered information to assess and manage them.

Their study, rooted in the field of crisis informatics, was funded by the ASU Knowledge Exchange for Resilience.

“Crisis informatics is a really fascinating area of study pioneered by Professor Leysia Palen at the University of Colorado, Boulder,” Pine said. “It looks at how people are using emerging technologies to manage crises. Broadly, it is a field of study that examines interconnections between information, people, technology and formal and informal organizations during crises and disasters."

Pine and her team interviewed 40 participants selected for diversity (age, geographic location and self-reported difficulties faced during the pandemic) from across the U.S. and found a surprising variety in the nature of their concerns about COVID-19, as well as a lack of trust in the information coming from most major news sources.

Pine shared with ASU News where people turned to for news instead, and how we might leverage that knowledge in the future.

Question: What were the most common concerns you found people had around COVID-19?

Answer: The most common concerns people had around COVID-19 were illness and economic risks. But that wasn’t all, and The Conversation piece we published about the study points out that people conceive of COVID-19 risks as more diverse and complex than popular narratives about managing “health versus the economy” suggest.

One thing I thought was really interesting was that people were really concerned about delays in life trajectories. Another thing that was interesting was that we identified these five categories of risk that all interacted with each other, that people were really struggling to balance. For instance, we interviewed a participant who was food insecure because she lost one of her jobs, so she was on food stamps. And she had to decide whether or not it was worth the risk of taking the bus and being in close proximity to people outside of her household so that she could go to the farmers market and get fresh produce, or whether she should just walk by herself to the local convenience store where the food was less healthy.

We also found people were delaying health care needs because they were terrified to go to the doctor and possibly expose themselves. One person we interviewed got a bad cut on her foot, and instead of going to the ER, she had her boyfriend call a friend of his who was a paramedic to come over to her house and stitch up her foot.

Q: What were the five categories of risk you identified?

Q: What did you discover about how people were getting information about COVID-19?

A: As we were looking at information sources, we realized the environment people were in was really important. Because one of the most common ways people were getting their information was through their own, small-world networks — so their own personal contacts. That was super-influential in shaping risk perception. For example, one participant said he was so overwhelmed by the news, so every day he would just have his wife report the news to him. Then a lot of people talked about having these ongoing group chats, either texting or direct messaging friends. And a lot of these group chats would center on an “expert” in some sense; so people would contact other people in their network who were health care workers, for example, and ask what they thought or how things were looking from their perspective.

Q: Do you have any idea why people felt less inclined to get their information from the news rather than someone they knew?

A: One of the problems people had with getting COVID-19 information from the news was that they felt like they needed information about specific circumstances, and they weren’t getting that. For instance, they might just want to know if their baby is at risk, or if their dad quarantines for two weeks, is that enough time for him to be safe to visit? So I think by reaching out to experts in their own personal networks, people were trying to get a more contextualized take on their own specific circumstances. They were sort of using human filters to determine risk.

Q: What can we learn from that? How can we leverage that knowledge to do a better job for the next crisis?

A: One thing I thought was interesting that my colleagues and I noted, because we interviewed some clinicians, too, was those folks are doing a lot of informal work as far as direct communication with the general public. So there’s certainly potential for future investigation there, as far as how we can try to support these small-world networks as key information sources. Maybe when clinicians get daily updates at their workplace about changing COVID conditions, they could share that with people in their own small-world networks. It’d be interesting to see if there’s a way to support that labor and use it as a better way to communicate all this complex information, because people really seem to trust that.