“Hamilton” is launching a national tour in Tempe, kicking off the return to Broadway at ASU Gammage. Performances are set for a five-week run from Sept. 8 to Oct. 10, 2021.

“The pent-up emotion and excitement for the return to live theater is off the charts, and there’s no better way to welcome Broadway back to Arizona than with the opening of ‘Hamilton’,” said Colleen Jennings-Roggensack, vice president for cultural affairs and executive director of ASU Gammage. “We know our community is aching to see it live, and the demand is so great we’ve expanded the tour’s run to five weeks.” 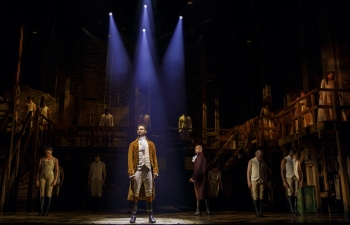 The national tour of "Hamilton" will kick off the ASU Gammage Broadway season on Sept. 8, 2021. Download Full Image

“Hamilton” is the story of America then, told by America now. Featuring a score that blends hip-hop, jazz, R&B and Broadway, “Hamilton” has taken the story of Founding Father Alexander Hamilton and created a revolutionary moment in theater — a musical that has had a profound impact on culture, politics and education.


With book, music and lyrics by Lin-Manuel Miranda, direction by Thomas Kail, choreography by Andy Blankenbuehler, and musical supervision and orchestrations by Alex Lacamoire, “Hamilton” is based on Ron Chernow’s acclaimed biography. It has won Tony, Grammy and Olivier Awards, the Pulitzer Prize for drama and an unprecedented special citation from the Kennedy Center Honors.

Single tickets for “Hamilton” will go on sale to the public on Monday, June 21, at 10 a.m. at asugammage.com.

“It's tempting to get tickets any way you can,” said Jeffrey Seller, the show’s producer. “There are many sites and people who are selling overpriced, and in some cases, fraudulent tickets. For the best seats, the best prices and to eliminate the risk of counterfeit tickets, all purchases for the ASU Gammage engagement should be made through asugammage.com.”

There is a maximum purchase limit of eight tickets per account for the engagement. When tickets go on sale, prices will range from $49 to $149 with a select number of premium seats from $299 available for all performances. There will be a lottery for 40 $10 seats for all performances. Details will be announced closer to the engagement. The ASU Gammage box office is closed for in-person sales. Tickets can be purchased 24/7 online at asugammage.com or Mondays-Thursdays from 10 a.m. to 5 p.m. at 480-965-3434.

The North American tour of the smash-hit musical “Mean Girls” will relaunch this November following an 85-week hiatus due to the COVID-19 pandemic. The record-breaking musical will resume performances with a one-week engagement at ASU Gammage from Nov. 2–7, 2021.“The entire ‘Mean Girls’ company is eager to hit the road in November and once again share our show with audiences across Nor...

The North American tour of the smash-hit musical “Mean Girls” will relaunch this November following an 85-week hiatus due to the COVID-19 pandemic. The record-breaking musical will resume performances with a one-week engagement at ASU Gammage from Nov. 2–7, 2021.

“The entire ‘Mean Girls’ company is eager to hit the road in November and once again share our show with audiences across North America,” said Lorne Michaels, the producer of “Mean Girls” and executive producer of “Saturday Night Live.” “And to all of our fans who have shared their enthusiasm over the past year, we can’t wait to welcome you back.” 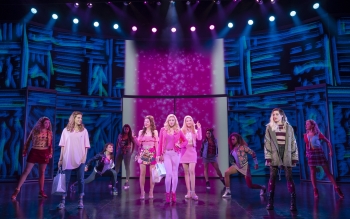 “Mean Girls” opened on Broadway in April 2018 to rave reviews at the August Wilson Theatre, following its world premiere at the National Theatre in Washington, D.C., in fall 2017. The North American tour of “Mean Girls” opened in September 2019 at Shea’s Performing Arts Center in Buffalo, New York, playing to sold-out audiences across the country before performances were suspended in March 2020. The Broadway production announced in January that it would not return following the pandemic.


“Reopening Broadway on the road is an honor and a responsibility because there’s so much work that has to be done,” said Colleen Jennings-Roggensack, vice president for cultural affairs and executive director of ASU Gammage. “There’s also the excitement of having something fun to experience again and ‘Mean Girls’ is full of fun. It says it’s time to get back into the theater; it’s time to laugh again and poke fun at ourselves. And I might wear pink all week.”

Earlier this year, “Mean Girls” announced plans for the musical to be adapted to a major motion picture from Paramount Pictures, as well as finalizing discussions for the show to bow in London’s West End.