Navigating uncertainty in the process is a crucial skill, according to head of Stanford's design school

Ambiguity is a challenging concept to embrace, but doing so can unlock the creativity and innovation needed to make big changes, according to a design expert from Stanford University.

Sarah Stein Greenberg, executive director of the design school at Stanford University, known as the “d.school,” addressed an Arizona State University audience on May 26 as the latest speaker for the Frank Rhodes Lecture Series. The livestreamed talk was sponsored by the University Design Institute at ASU, which explores ways to transform higher education.

At Stanford’s design school, students engage in “problem-finding” before they move on to “problem-solving,” she said. That happens through research, interviewing, observation and exploring historical context.

“We’re part of the movement around human-centered design, making sure there are human needs at the center of how we’re conceptualizing the problem we’re trying to solve,” said Greenberg, whose talk was titled, “The Journey from Not Knowing to Knowing.”

“What happens is that when they engage with our coursework, they wind up having to navigate much more ambiguity than they expect, and for many students, that can be very disorienting at the beginning.”

Greenberg said that skill in confronting ambiguity is not only crucial in design, but in any kind of creative work.

“The end point is not that you’re not a perfect expert or know everything about the thing you’re trying to design, but that you’re open to the fact that you don’t know the right answer, or that there is a right answer,” she said.

In the process, designers reframe the problem and contemplate many possibilities, which they evaluate through building many iterations.

Designers must find just the right amount of constraint on their process because too many restrictions will inhibit innovation but too few will create indecision.

“Developing judgment over time about how you leverage constraint in the right way to invite the right amount of ambiguity in your work is a skill we aspire to build in our students,” she said.

She gave an example: A group of students in Greenberg’s “Design for Extreme Affordability” course traveled to Bangalore, India, to work with a hospital chain. They didn’t know what problem they would solve but assumed it would be related to efficiency or cost reduction.

When they got to the hospital, they found hundreds of people waiting around the hospital, in the hallways and outside. They were worried family members of patients.

“The students were curious, so they interviewed them,” Greenberg said.

“The family members would be waiting not for hours but for days. The average time meeting with a doctor or nurse was very short, and there was a tremendous amount of anxiety and uncertainty and a lot of fear.”

This was outside the scope of what the students expected, but when they returned to Stanford, they worked on prototypes for ways that the family members could be included in the care process. Could they be taught to take the pulse or blood pressure of patients?

“They were trying to figure out if they could deliver education about this to a range of folks regardless of language or literacy level,” she said.

They returned to India to pilot a program in which nurses taught family members how to care for their sick relatives, which resulted in a line around the block of people eager to participate.

“At the end of their degree program they decided to defer everything and founded an organization called Noora Health, oriented around family members who are left out of the healing process,” she said.

“It was more powerful than what the faculty could have crafted.”

Greenberg asked the audience to gauge their own dispositions around ambiguity, whether they endure it reluctantly, engage with it most times but not always, or embrace it.

“I think highly functional teams have a mix of this,” she said.

She also discussed the ethical nature of the design process, starting with framing a problem.

“The framers of a problem get to choose it and look at it with their value system,” she said. “The framing of a problem is a form of power.”

That’s why inclusion is crucial.

“If you’re in a situation as a designer where you are not personally experiencing the set of challenges you’re working on, you have to be really thoughtful about making sure the breadth of people working on it includes people with the lived experience,” she said.

“The process of building, creating and testing solutions needs to be hugely collaborative.”

Greenberg noted that with the pandemic, many people are dealing with “ambiguity fatigue,” as they face uncertainty in their personal and professional lives as well as in society. Students who are working and fulfilling family responsibilities while attending college already are challenged with ambiguity.

“I think there’s a hesitancy to say, ‘You will be challenged,’” she said.

“But it’s so helpful to raise that possibility with students ahead of time. And it’s incredible to hear students say, ‘I’m in that part of the process where we’re navigating ambiguity.’ And they’ll have a conversation with their team or teacher about that.

“There’s something powerful in naming it.”

Top image: Sarah Stein Greenberg, executive director of Stanford University's design school, was the speaker for the Frank Rhodes Lecture Series at ASU on May 26. Screenshot by Charlie Leight/ASU News

Feeding the hunger for meaning

It’s no coincidence that the exhibit map for “Telephone,” an ambitious project that enlists creators of all kinds to mimic the classic children’s game by “whispering” a message from one art form to another, resembles the branches of a tree. Nathan Langston, who conceived of the project, now in its second iteration, was inspired by that metaphor when considering what message to begin th... 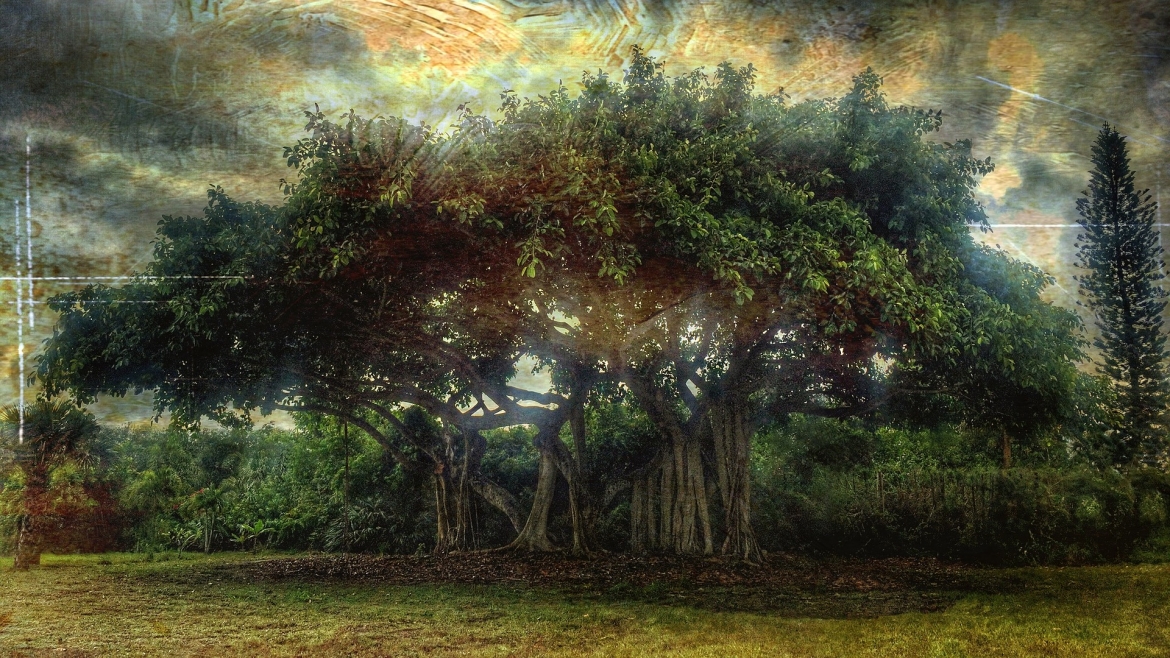 Feeding the hunger for meaning

It’s no coincidence that the exhibit map for “Telephone,” an ambitious project that enlists creators of all kinds to mimic the classic children’s game by “whispering” a message from one art form to another, resembles the branches of a tree. Nathan Langston, who conceived of the project, now in its second iteration, was inspired by that metaphor when considering what message to begin the game with.

The 2015 iteration of “Telephone” had used “The Breton Fisherman’s Prayer” as its original message. This time around, Langston settled on a passage from the book “Ladders to Heaven: The Secret History of Fig Trees,” by British biologist Mike Shanahan, about the banyan tree, a type of fig tree capable of growing so large as to resemble a forest from afar.

Arizona State University English Professor Sally Ball, who contributed to the project, was surprised to learn from whence it came – each artist participating in the game is only aware of the artwork that directly preceded their own, so the original piece that prompts the rest is a mystery to all but the first few tasked with interpreting it.

From there, the original message could morph from poetry to music to film, and so on, with each interpretive work being “whispered” on to two or three more artists. Halfway through the game, the method is reversed; instead of a few artists receiving one work to interpret, one artist receives a few to synthesize into one, eventually concluding with a single work of art, at which time the original prompt is revealed to all.

To Ball, who did not participate in the 2015 iteration, “The Breton Fisherman’s Prayer” seemed a decidedly more poetic nugget of language to employ as a prompt for such a project than Shanahan’s austere historical account of the first Europeans to have seen a banyan tree.

“It seemed almost like it was designed to provoke drastic interpretive leaps,” Ball said.

The game itself, according to Langston, was resurrected in March 2020, at the onset of the pandemic, in part because of its ability to make drastic leaps in space, “connecting strangers in a uniquely intimate way” at a time when physical closeness wasn’t possible. 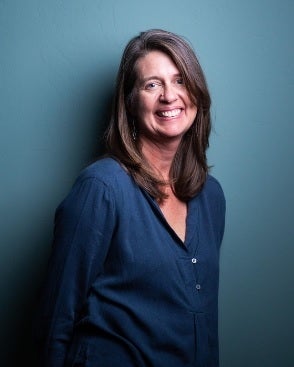 If you ask Ball, it was successful in that endeavor. “It very much felt like a kind of rescue from isolation,” she said.

The second iteration is now complete and available to view as a free, interactive digital exhibit on the project website. It includes the work of more than 950 artists from 474 cities in 69 countries.

Ball’s contribution, a poem titled “Red Life,” was inspired by the preceding artwork (referred to, as all preceding artworks in the project are, as “last generation” in the hyperlink that will take you to it in the exhibit), a short film by the German artist Beatriz Crespo.

In “Red Life,” Ball contemplates form, along with what can be contained in a work of art and what might spill out. When you watch the film that she drew from, with its words that run off the page onto a table and crazed glass bowls filled with bits and bobs, a throughline begins to emerge.

The practice of ekphrasis — drawing from a work of visual art to create vivid, verbal descriptions — is one Ball had been exploring on her own for some time. “SO MUCH OF THE WORLD STAYS BEAUTIFUL: HOLD,” is a product of that exploration.

A limited-edition artist’s book, “HOLD” represents Ball’s collaboration with Czech gravuristGravure printing is a style of printmaking or relief printing where an image is incised into the surface of a copper plate. Jan Vicar. In it, words from her poem of the same name — which appears in her third, full-length collection, “Hold Sway,” an examination of climate change — appear next to linocut prints of oil rigs and various flora and fauna.

Ball recently visited Paris to read from the book and discuss the process of making it at an exhibit of Vicar’s after he received an award for his work from the French Academy of Fine Arts (Academie des Beaux-Arts). This fall, the book will be on exhibit at the Harry Wood Gallery at ASU.

“My grandmother was a painter, and I think in my life, she's the person who made art seem sort of real and doable to me, and not locked up in a museum or outside of the lives of everyday people,” Ball said. “I did not turn out to be a painter, but I think that having come to a sense of art from that orientation, I’ve always felt a kinship with other kinds of artists.”

During Ball’s sabbatical in 2015, she spent a month at an artist’s retreat, where she assumed she’d be accompanied by at least a few other writers. As it turned out, she was the only one; everyone else was a visual artist.

“I loved being in their company and I felt so buoyed and like I was learning from them and the way that they approach their work,” she said. “My first book, ‘Annus Mirabilis,’ is about the way scientists seek knowledge and the ambition that scientists have as compared to the ambition that artists have to understand things and to know things and to interpret meaning out of the universe. I guess I'm just sort of a meaning-hungry person.”